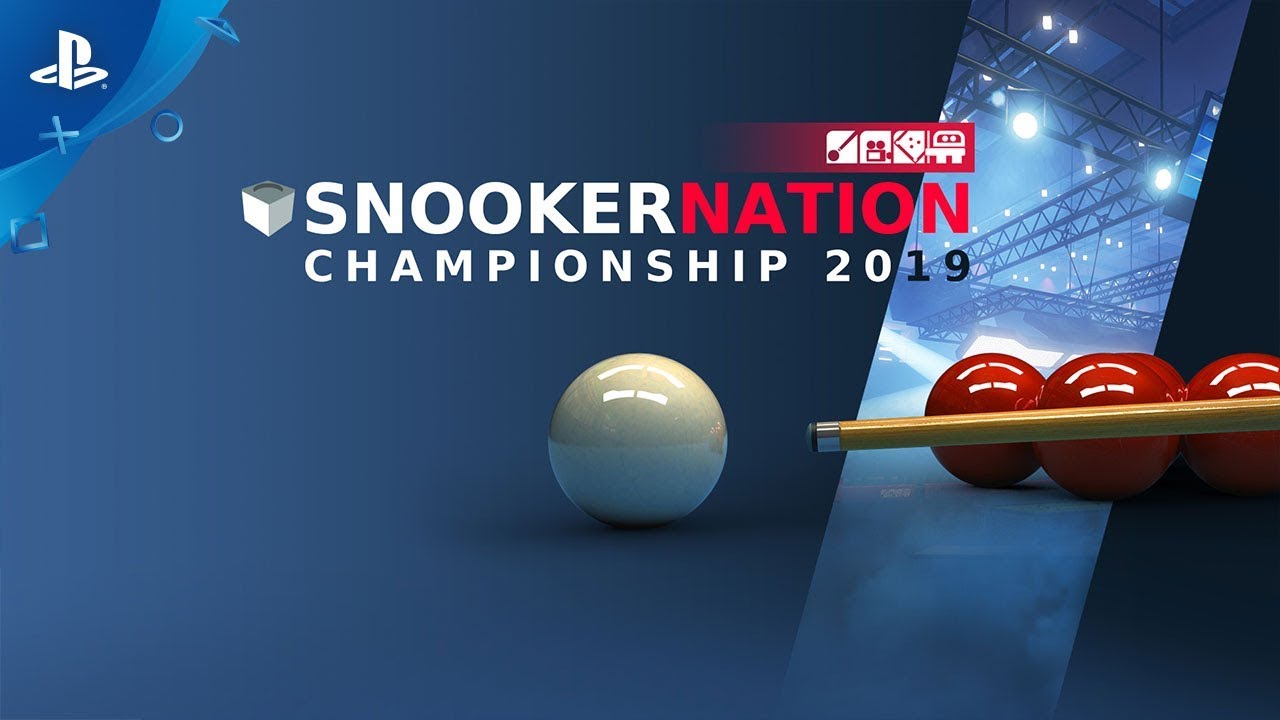 After 2 weeks of Snooker on our Televisions we reach the epic conclusion of another World Championship, this left a question in my mind as it does every year: What am I going to do when it’s finished? Cherry Pop Games have brought us Snooker Nation Championship to try and fill this void.

The question is will it live up the expectation or will crumble under the pressure of the gaming Crucible?

Snooker Nation Championship is a fairly bare-bones version of a snooker game when compared with other releases both past and present, that’s not to say it isn’t a good or fun game.

There are 3 main modes of play, Championship, Online and Versus mode. All of which are similar, but then again this is snooker so how much different should they be? On top of this, you have a practice mode, a Skill centre and a profile page (basically a stats page to keep records of your progress).

The championship mode is essentially ‘career’, however, there is only one championship to challenge for, and this is split over 5 rounds where you have to defeat multiple AI opponents of varying difficulty.

Online and Versus mode is essentially the same, from my experience playing online, the servers seem to be decent and I had very little issue in terms of dropped connections or lag while playing.

Snooker Nation Championship is very similar to older snooker games in terms of the match play, each shot is lined up using an aiming aid and a small shadow circle to highlight the finishing point of the cue ball. 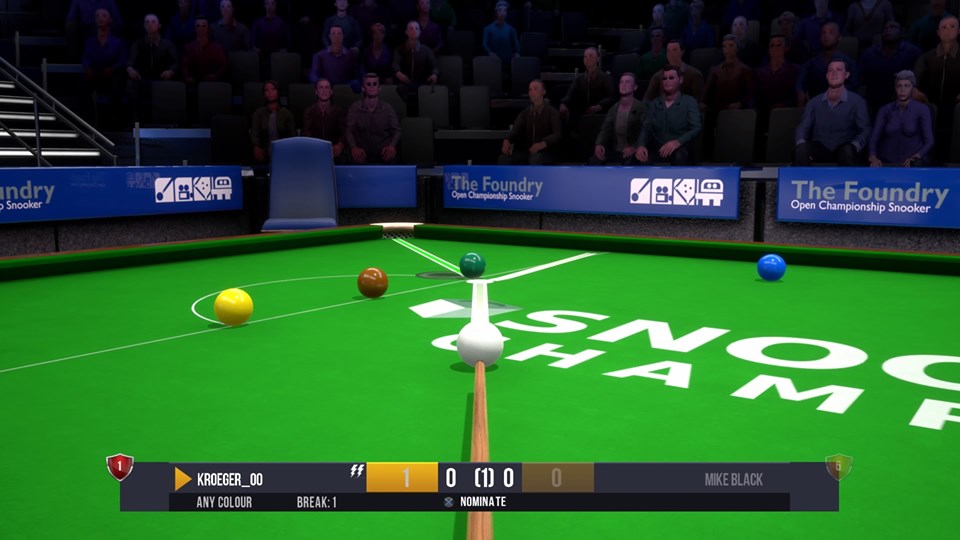 The controls can feel a little clunky and awkward at times, such as tilting the analogue stick back to control power but then having to lock and unlock that power bar with R1 just to see where the cue ball is going to finish. Yes, it works and it’s not difficult but I felt it was a little messy and could have been a little less cluttered in its application

A nice feature is the ability to unlock various additions to customize your game, patterned Cloth for the table, additional cues, venues, etc. This does make you want to play one more match just to see how that new unlockable changes the game. The downside? Some of the cloth designs make playing the game a little challenging and can be distracting when lining up the shots. 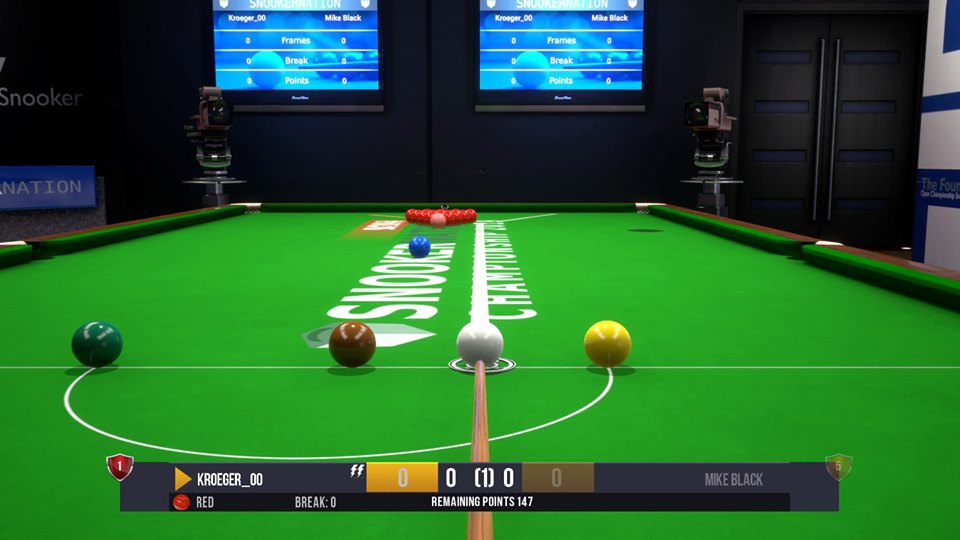 I suppose after saying that the key question is, does it feel like you’re playing snooker? The answer to that is both yes and no. It is the game of snooker; however, I’ve found it to be overly simplified and too easy to build breaks with limited skill opposition. For example, in my very first game, I scored 135, hardly something you should be able to do so quickly.

Anyone that has played the old PS2 and PS3 Snooker World Championship games will definitely feel and see a similarity here, the intro music and video especially feel like they have been pulled straight out of one of those games and given a little dust and polish to fit a current gen game.

While I don’t know for sure if any of the Cherry Pop Games team used to be part of the Dark Energy Digital Team responsible for WSC Real 11, this addition makes me think there is a strong possibility of this.

Unfortunately, this nostalgic feel pretty much disappears when the game starts, the table graphics are mediocre at best, the ball mechanics are choppy in places and the sound effects are just terrible. The noise of the balls colliding and bouncing off the cushions is something reminiscent of a very old C64 Snooker game that I had as a child (for any of you that remember it the cover art had a Cue Ball with Arms and Legs wearing the classic Dennis Taylor Glasses).

This does have a massive impact on the game as every shot made me cringe and question if I should be playing it or not.

Like with any Sports game, the longevity really depends on how much you like the sport. As I mentioned earlier, there are a bunch of unlockables within the game that will keep you busy for a while (as long as you can either stomach the sound effects, or mute the TV).

Due to the lack of any real career mode and only having one ‘championship’ I do think Snooker Nation Championship is going to struggle to keep people playing much after the buzz of the snooker season has gone (with the exception of any die-hard fans of the sport).

There aren’t really that many trophies either to keep you busy, only the standard few that you would expect with a snooker game (win the title, score a Century etc.).

Having said that I don’t want to be too negative on the content as it is, in essence, a budget title at £7.39 (at time of writing) and for that cost, there is enough here to keep you playing for a while at least.

Snooker Nation Championship is one of those games that I think avid snooker fans would probably avoid in favour of other titles that have more authentic content, but at its price point, it will definitely appeal to the casual fan or someone looking to play a few games with friends.

It certainly has a few good features that I would like to see them expand on in the future such as the customisation and extra venues etc. but the limit of one Championship is restricting.

My biggest recommendation for the next release (or a future patch) would be to fix the sound effects, they really are off-putting and would make such a big difference to the game and how it feels to play.

Disclaimer: We Received a code in order to complete this review.