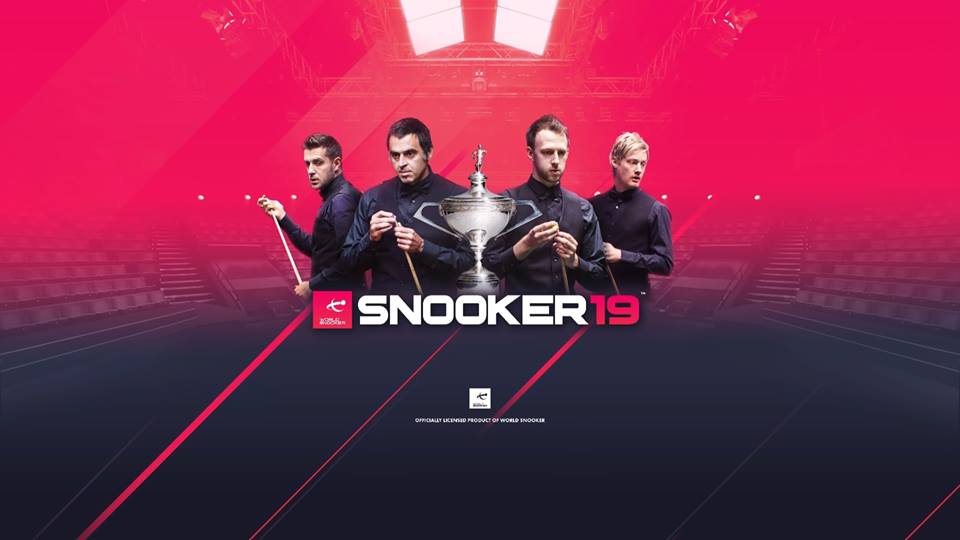 It’s been 8 years since the last ‘official’ snooker game crossed our tables with WSC 11. While it wasn’t perfect, it was a decent enough game. Given the amount of time that has passed, the announcement of Snooker 19 was met with a lot of expectations and excitement among fans of the green baize.

As someone who has been a huge snooker fan for over 25 years and has played almost every snooker game since the Commodore 64. I have been counting the days for this game since it was first announced, and there is a simple reason why…

Lab42 have worked alongside World Snooker to bring us what could be the most complete entry ever seen, the top 128 players all included, all the official tournaments and venues from the circuit as well as the first appearance of Jimmy White in an ‘official’ snooker game!

That’s a lot to offer and massive pressure on Lab42 in their first entry to the genre, have they hit a maximum? or have they missed the pack all together?

I think to do this game justice; I should split this section into 2 parts: On the table and Off the table. The reason I want to do this is that as any snooker fan will tell you, the key to this game being successful is the table physics. Basically, does it feel and play like real snooker? But I also think there is a lot more to discuss elsewhere as well. So, let’s start with on the table:

Whether you choose an exhibition game, or career mode or even online play the game is the same (it is snooker after all). The table is presented as though you were watching it on TV (yes, the top down view), even after a number of hours playing this still feels rather strange and I would much rather be lined up behind the shot as though I was going to play the shot as my first screen. 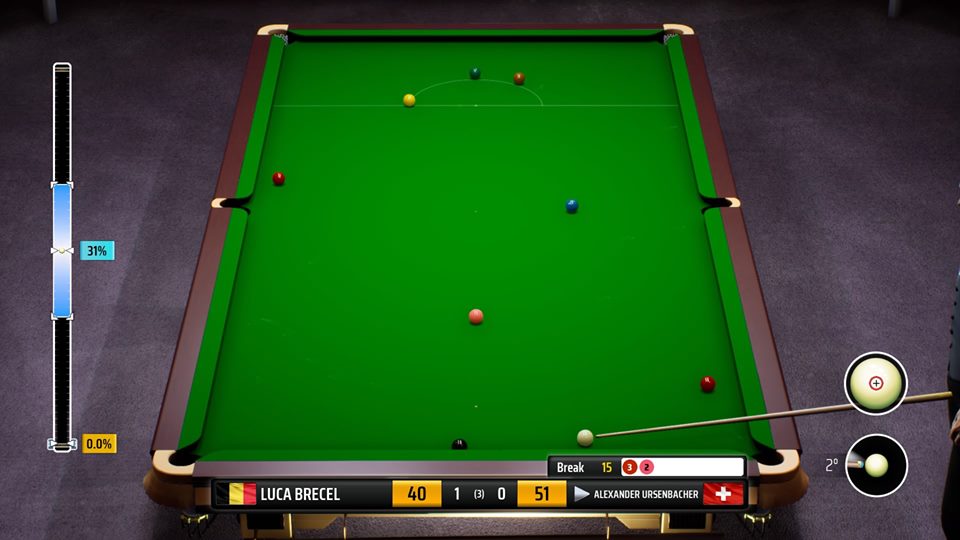 It’s only when you reach the second shot selection screen that you get behind the shot, this then feels much more like the older games with the aiming line from the cue ball to the object ball and then the trajectory lines coming from those. Once this is all lined up, its then time to move onto the power/spin and taking the shot. These can all be adjusted using the analogue sticks and while I personally prefer the older method of pressing X to take the shot the newer method with the sticks doesn’t feel too alien and isn’t really any more difficult. 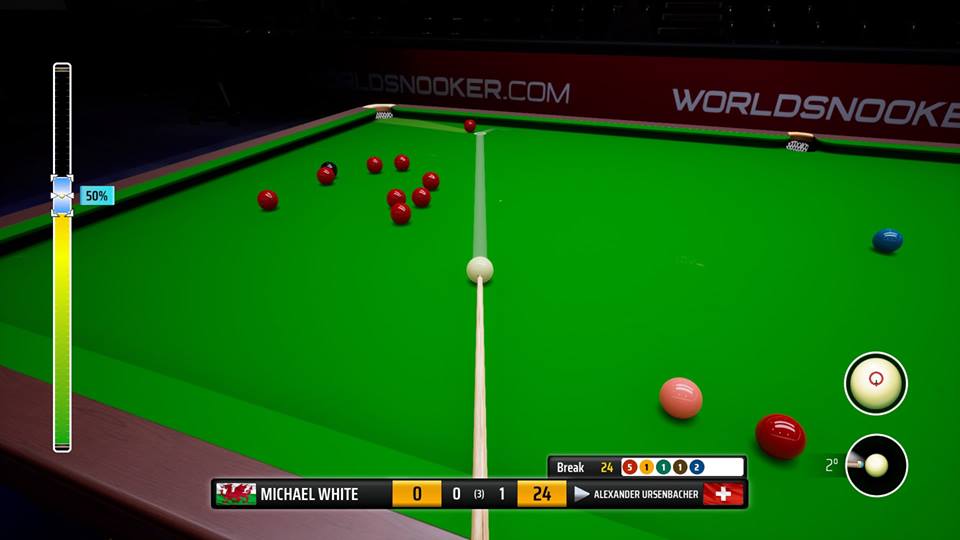 The table itself looks great, the interaction between the balls, the control of the shots and the reaction from the cushions are without a doubt the most impressive I’ve seen in a snooker game.

Snooker 19 has a few gameplay options to pick up right from the start, exhibitions, online play as well as 2 different types of career mode. One of them involves taking over as an already established pro player where you can select from any of the top 128 players in the world and try to carve that players name into the archives of World Snooker, the other involves taking over as a rising star (one of around a dozen young players on the circuit) with a similar goal. Unfortunately, neither of these options include the ability to create your own player, a feature that I think would really benefit here as all snooker fans want to see their name carved into the trophy at the Crucible. 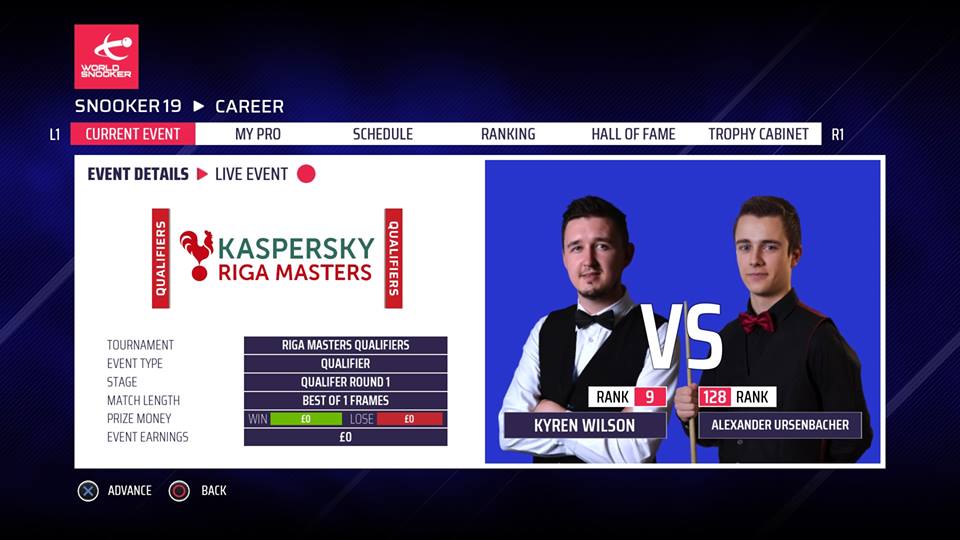 Overall the gameplay in Snooker 19 is in my opinion very close to playing Snooker in real life. If you avoid the distractions caused by graphical errors (I will mention later), it’s most certainly up there with the best we have had in previous years.

This is where Snooker 19 has it’s issues. There’s no denying that while most of the on-table graphics and textures look amazing (at times you can even see chalk lines & hand prints on the cloth), some of the graphics off the table are lacklustre. A few of the character models are rough around the edges with faces that remind me of the Tiger Woods games back on the PS3 with the ‘upload your own face’ options. This wouldn’t be so obvious if it wasn’t for the contrast between the two (as can be seen below).

On top of this the character animations can appear to be a little jerky at times, not a massive issue but I have noticed it seem out of time with the shot / audio. There have even been times with rest shots where the rest itself has appeared to go through the table instead of lifted on top of it. Again, not a massive problem, it just breaks immersion.

I can however say this is a huge improvement when compared to the pre-day 1 patch version (the version on the physical copy of the game) which has a whole host of problems, so make sure you install that update (Unless you want to take a shot using what can only be described as a Penis Cue…)

Snooker 19 has decided to go down the Eurosport route for its commentary and the voice of John Virgo complaining about your shot choice has been replaced by Neal Foulds and David Hendon. Although I’ve found that the same problems still arise that are in every sports game with commentary, either it doesn’t match what has happened on screen or its extremely repetitive.

It is a nice touch to have Brendan Moore included in the game as the Referee calling out the start of each frame as well as the scores, it would have been nice to include more referee’s but that’s just me wanting the game to be as close to real as possible.

With the entire World Snooker tour card both online and offline as well as Exhibitions there is definitely plenty here to keep any Snooker fan busy for a very long time.

There are a whole host of trophies to hunt for that will take Snooker Perfection (yes there is a trophy for a 147 as you would expect).

If Lab42 can bring season updates to Snooker 19 (think along the lines of FIFA Transfer updates) heading into the 2020 season then I don’t see any reason for this game to be shelved at all over the next 12 – 18 months at least (assuming Lab42 are planning to make this a yearly release).

Snooker 19 is definitely one of the best entries into the Snooker gaming genre and as its Lab42’s first entry I definitely look forward to seeing what they can do should they decide to make more (Practice makes Perfect after all). Sure, it has a few problems here and there, but who remembers back in the day with FIFA when you could run away from the Referee forever to avoid a Yellow Card! Back then I doubt anyone would have foreseen the game becoming what it is today.

It would have been nice to have included the Legends tour here, but given that Stephen Hendry is working on another Snooker title I can certainly see why it wasn’t. Some of the other Legendary players as DLC would be a nice option?

I’m basing my award decision on the game being for Snooker fans. As someone who enjoys both the challenge of playing in real life as well as watching the sport on TV (Looking forward to the World Championships this Saturday!) Snooker 19 deserves a Thumb Culture Gold Award and is a must for any and all Snooker gamers.

Disclaimer: We were given a code in order to complete this review.