Sniper Ghost Warrior 3 is an open world first-person shooter developed by CI Games and is the third entry in the series, if you couldn’t make that connection already.

You take control of Captain Jonathan ‘Jon’ North, who was sent to the Russian-Ukrainian border along with his fellow Marine and brother Robert. Your mission, whether you like it or not, is to destroy some biological weapons before they are stolen by terrorists. The mission is successful, however you are ambushed by a group of special forces soldiers led by a lovely man called Vasilisk. He proceeds to carry out a game of Russian roulette against your will, you win but you get knocked out and your brother is captured.

The story then moves to a couple of years later where you are sent to help eradicate Georgia from its separatist cells. These cells are reportedly receiving a large amount of funding from an unknown source. Along with trying to take down the separatist you are also trying to locate your brother who has been reportedly spotted in the area.

You are joined by a few other characters, your handler Frank Simms, a ex-special forces sniper called Lydia and an Israeli agent names Raquel. Each character has a different reason to be helping our Jon and through the game these reasons become clear. 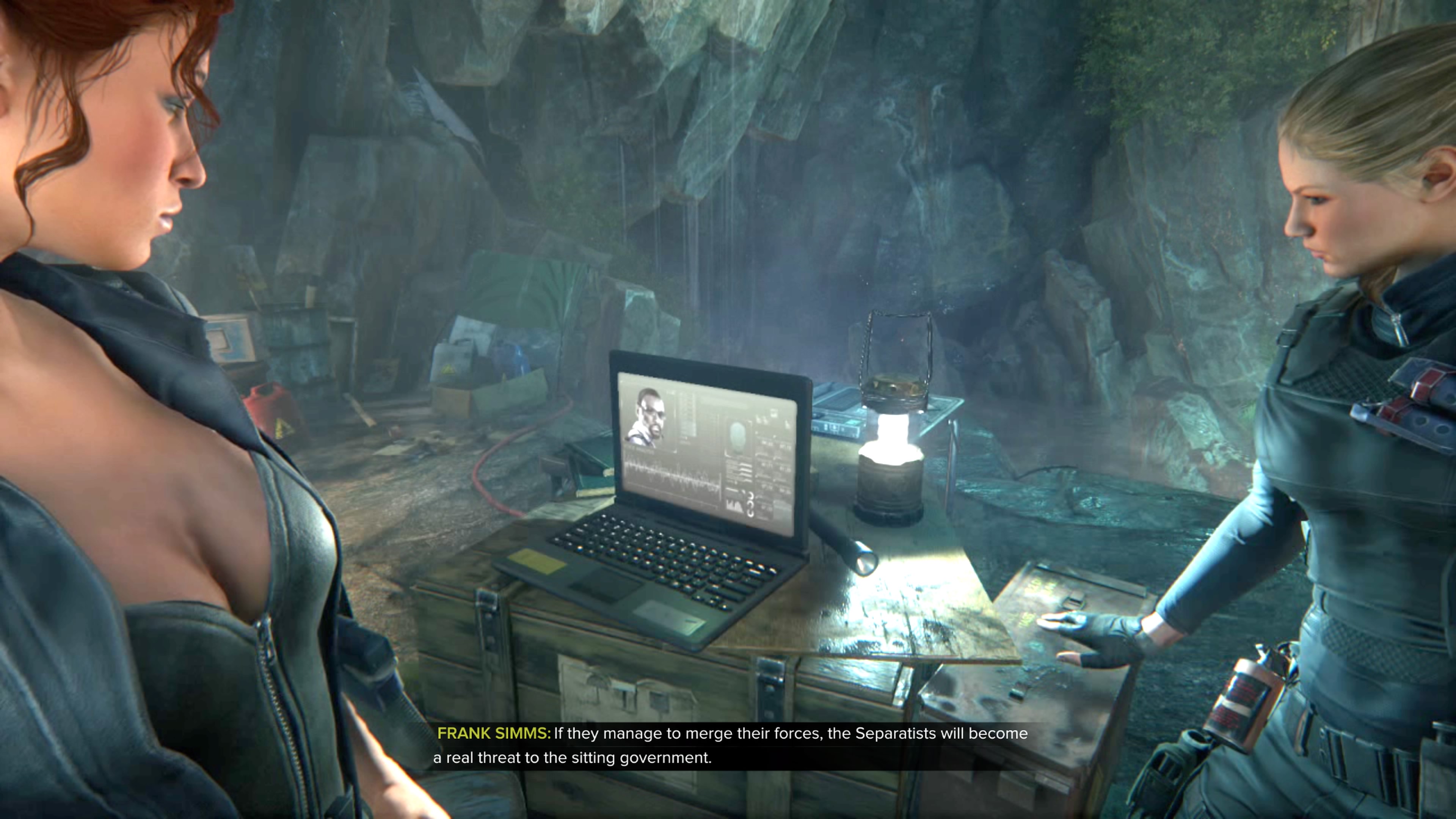 Sniper Ghost Warrior 3 wouldn’t be a sniper game without the weapons, and this is no disappointment, there are a myriad of sniper rifles, secondary weapons and pistols to chose from. Along for the ride is a drone which allows you to recon the area and tag targets before taking their heads off with very good sniper mechanics. You have to adjust the scope of the rifle to take into account the distance, wind and trajectory. It sounds harder than it is, when you hold down L3 you take a deep breath and then you get a little indicator to show where the bullet is going to hit. Makes it all simple right? Well, not entirely. You still have to get into the best position possible, you still have to sneak around so that you don’t alert the enemies on patrol. Yes you could quite easily run in and try and take down everyone using a compound bow, but you wouldn’t get very far. Taking damage is not something that you want to do, you are dropped quite easily at the start of the game when you have no armour, but progress through the game long enough and you gain better and better armour.

You get around the relatively large map either on foot, or by vehicle. Although not every vehicle can be driven, you see a nice armoured transport and want to race around the dirt roads in that, well you cant! Instead you get to take your very own run down jeep.

Sniper Ghost Warrior 3 does have to lose some points for the ridiculously long load times, the starting load time along was around 4 minutes long. This is seriously not acceptable for a game in this day and age, although i’m sure that it can get optimised with a patch in the future.

One big game effecting glitch was experienced during my time with the game. When you are low on health you have to use your medpacs or bottles of pills that you collect as you move through the areas. In this particular instance I switched the medpac into my inventory so with a simple hold of the triangle button I could administer first aid to myself. However, when the button was pressed all it did was place the adrenaline pack back into my inventory and refused to allow me to get some health back. Highly annoying! 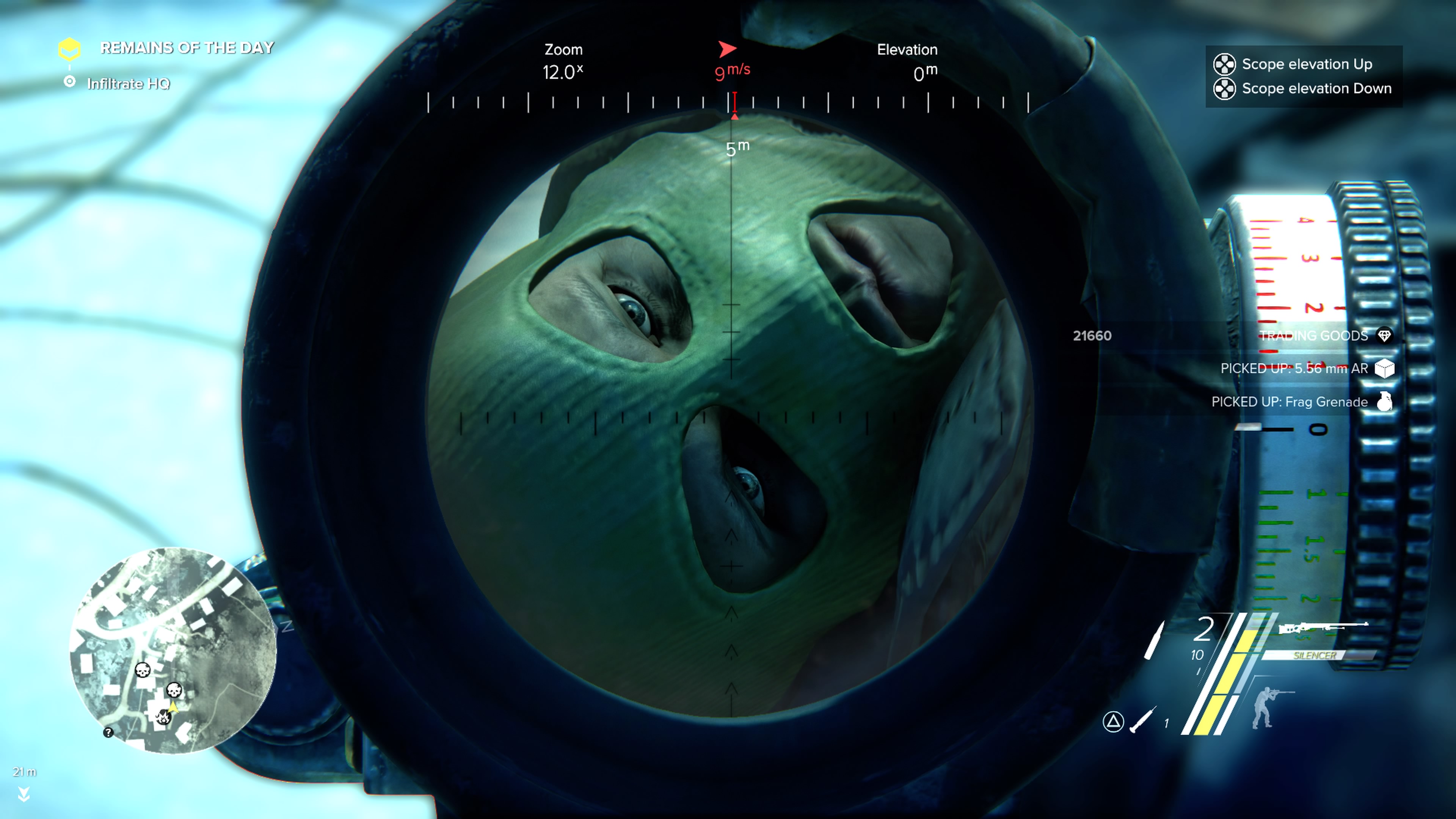 Graphically the game is lush with green trees and varied environents. Textures are good, and the movement through the environment seems to be smooth for the most part. If you start turning too quickly you will see the frames get choppy and it will almost seem like you are stuttering as you spin on the spot.

When using the compound bow and its arrows, there was a strange experience where the arrows seemed to vanish into thin air. Fire an arrow at a tree and you expect it to still be there, maybe not be allowed to reuse the arrow, but at least to see it standing proud from the trunk. Not in Sniper Ghost Warrior 3, those arrows just vanish, not a trace. Its little graphical elements like this that makes me feel sad, I like to see the arrow in the environment.

The one thing that does give Sniper Ghost Warrior 3 a plus point is the slow down when you fire a deadly bullet. Hit someone in the head and you will get a slow down of the bullet travelling towards the bad guy. Keep following until the bullet enters the persons head and take a chunk out of their skull. Its gruesome yet satisfying. It still is second best however, to another sniper games slow-motion kills. 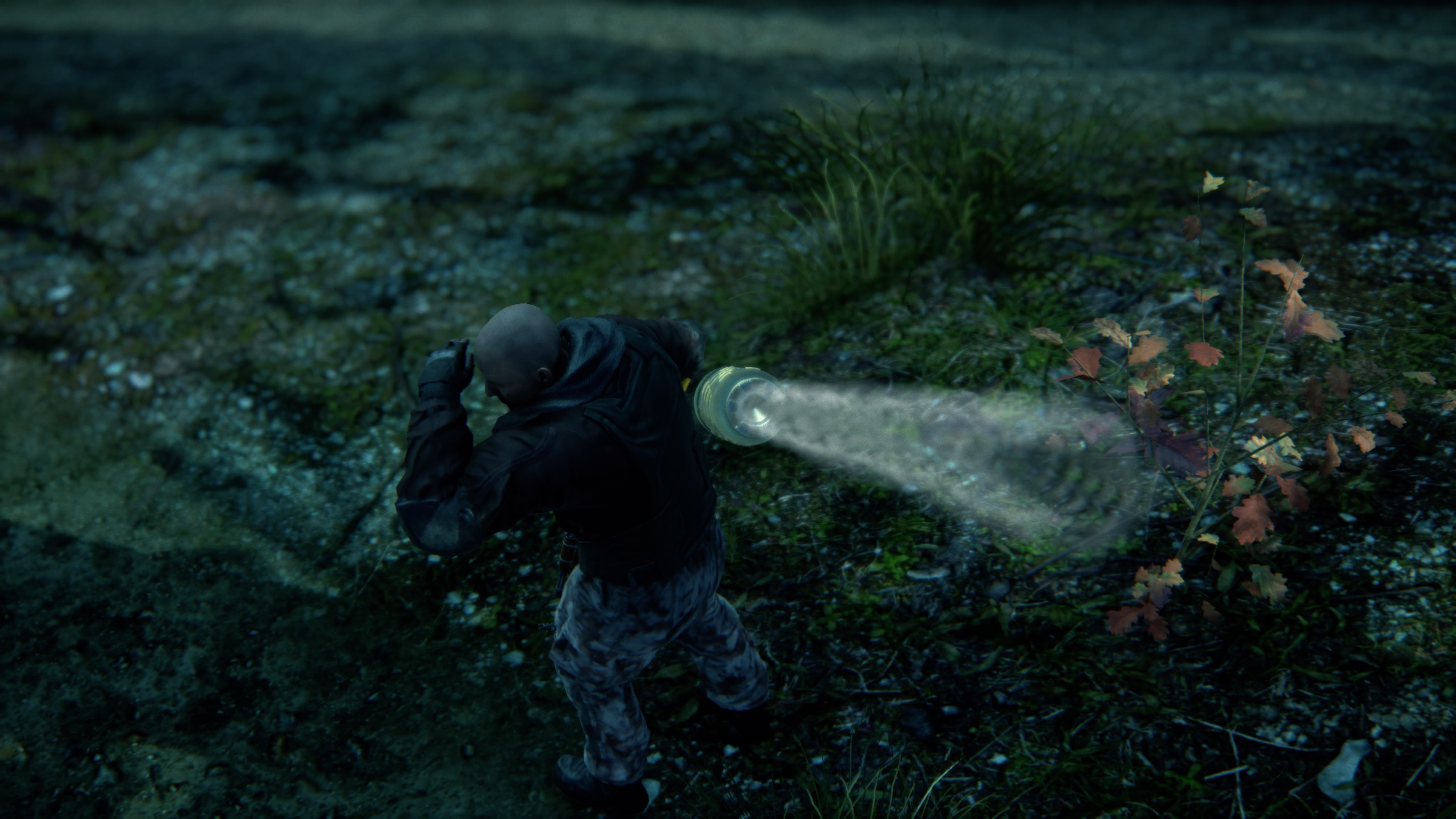 The audio in game is good, with the bullet sounds to the squelch of brain matter as you hit a separatist in the brain. It is all sold very well.

Listen out for enemies patrolling and talking amongst themselves, listen our for them trying to search for you. All of this allows you to get a better idea of where they are and if there is anyone left to dispose of.

First off, we’d like to thank everyone who has supported us in our endeavor to make the best sniper experience possible. It takes a huge amount of effort in order to make a game on the scale of Sniper Ghost Warrior 3, and we’re committed to making the game even better as we continue to support this past release.

The game is being received well in the market and we are collecting valuable feedback from players and are actively taking steps to make sure that Sniper Ghost Warrior 3 is even better moving forward. So, I wanted to explain what our plans are in support for the game:

Before we release any more content for the game, we have dedicated staff working diligently to further optimize Sniper Ghost Warrior 3 to ensure fewer issues with framerate and loading times.

Only once we feel that proper headway has been made on the system performance, will we begin adding extras such as the much-requested multiplayer component.

We’re 100% committed to making the best game we can. Thanks again to all of the people who have supported us so far. We couldn’t have done this without you.

Now this in my opinion is very disappointing, releasing a game when effectively half of the game isn’t ready is surely a cardinal sin in this day and age right? Well in a way I am happy that this is the case, it gives more time to play through the story mode and no doubt more people will experience all that Sniper Ghost Warrior 3 has to offer. All of this even before the online multiplayer element gets released!

There is plenty of main missions and side quests to carry out in the area, whilst it might not be the biggest open world area it is definitely dense with things to do. 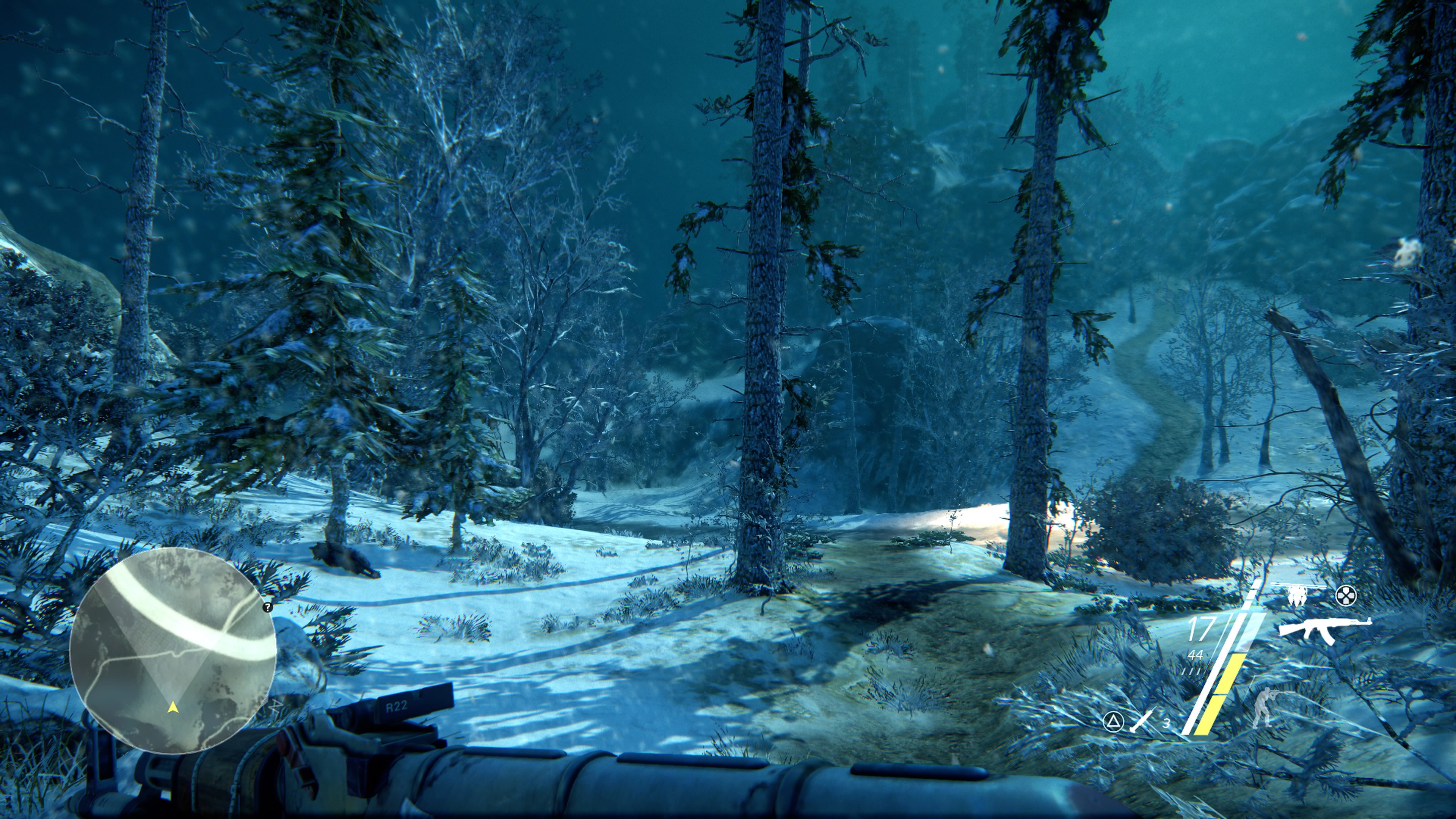 Plenty of trees to hide

Whilst the game has some very very good points, but along with its loading times, and glitches prevents it from being anything more.