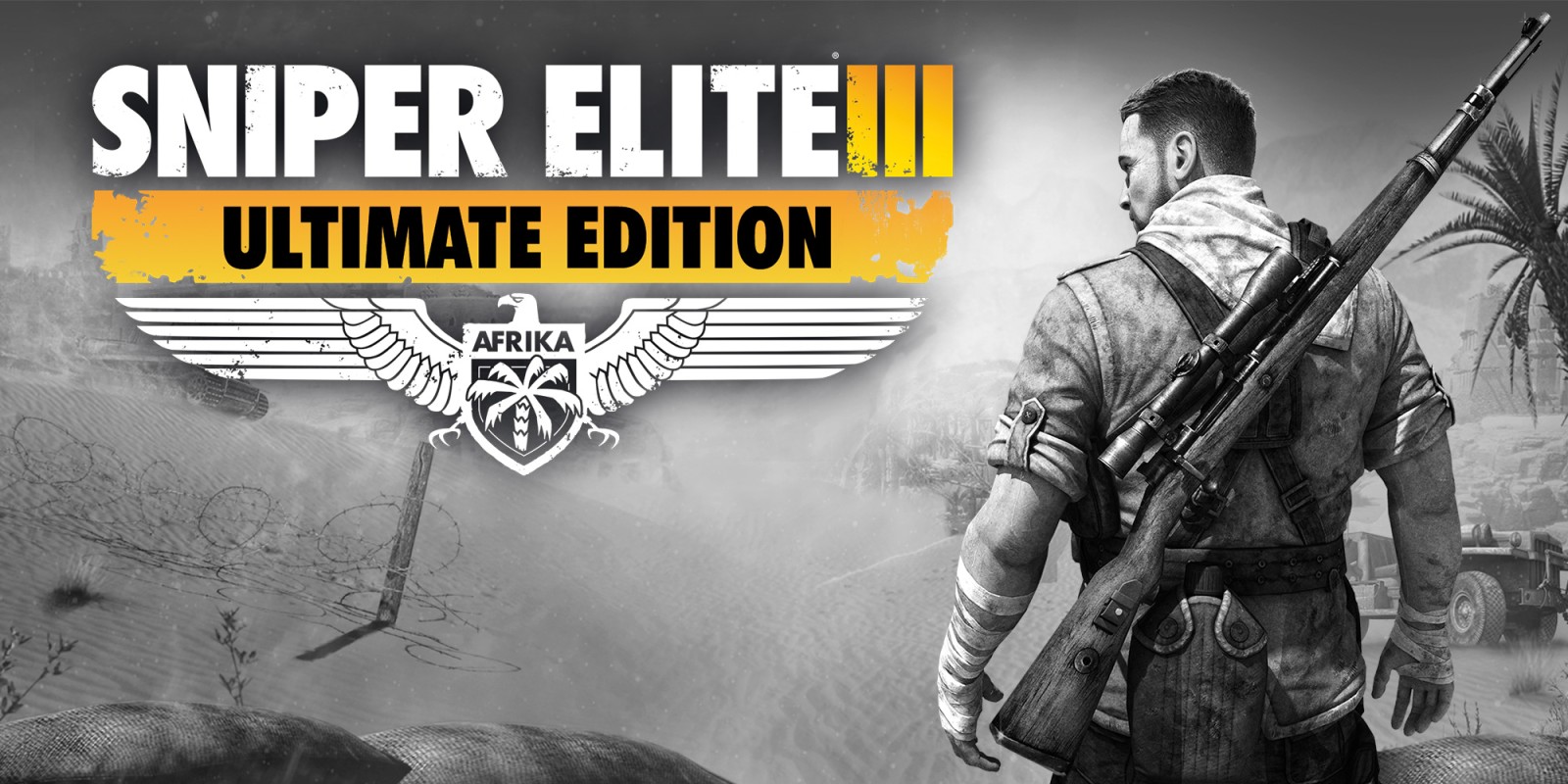 Sniper Elite III Ultimate Edition initially released on multiple formats back in 2014. It was perhaps inevitable that a Switch port would one day arrive, but I’m pleased to say that this is a quality conversion, and brings across extra content and improvements which developers/publishers Rebellion Developments have introduced over the years since it first came out.

Sniper Elite III Ultimate Edition is set in 1942 in Nazi-bothered North Africa, which makes for a refreshing change from the usual dingy grey bunkers on dingy grey streets which litter games set during World War 2. You play as Karl Fairburne, a gruff-voiced man with a rifle which enters the room 10 seconds before he does. Your goal is to track and take down the fictional General Franz Vahlen, who is doing naughty things with military technology.

Sniper Elite III Ultimate Edition is a stealth game at its core, and much of the gameplay revolves around silently stalking around enemy outposts, while silently taking out Nazi soldiers without being spotted and located. This might sound like par for the course, but unfortunately Karl’s primary weapon is (you guessed it) a sniper rifle, which happens to make an absolute racket.

Taking a shot will typically alert all nearby enemies to your vague location, with another shot from the same location confirming exactly where you are. Thankfully you can use environmental noises, such as a spluttering generator or an intermittent storm, to mask your shots and remain incognito. You also have a range of traps and explosives, a very short range silenced pistol, some nigh-on useless machine guns and a knife at your disposal.

While Karl isn’t exactly a parkour master he controls reasonably well, and sometimes the enemies feel a bit puny given how easy it is to escape their sights. Re-locating far enough from where you fired or hiding from patrolling Nazis for long enough will reduce caution levels back down again. What’s more you can save at any time, although this can cause some issues which I’ll touch on later.

The sniper rifle is great fun to use. Realistic bullet trajectories are applied at higher difficulties, meaning your shot won’t necessarily hit home when an enemy is in your cross-hairs. Thankfully Karl is able to empty his lungs to steady his rifle and provide you with visual clues as to where to aim your shots.

If you manage to fire a shot on target this will result in the camera tracking your bullet as it merrily whistles through the air, before you are treated to a Mortal Kombat-style x-ray showing which organ or bone has gone to the great offal dump in the sky. I never got tired of these gruesome little cut-scenes triggering, though they might be a bit much for some, especially those who wince at the sight of a testicle taking a battering.

If you get sloppy you’ll find that enemies hit hard and kill fast, but Rebellion Developments have worked wonders in reducing re-start and load times to just a couple of seconds.

The main flaw with Sniper Elite III Ultimate Edition is the lack of variation in terms of the gameplay. The central mechanic is fun but each level ultimately becomes a case of picking through all the enemies, completing a couple of simple side missions, then escaping. There are additional missions which initially released as DLC, a solid multiplayer mode, a survival mode and a shooting range but they all feel very similar. Part of this is because your arsenal is so generally ineffective and/or noisy that your rifle and silenced pistol are pretty much always your best options.

In addition Sniper Elite III Ultimate Edition is not without bugs. As mentioned previously, you can save at any time, which is usually a godsend. However, at one point I was allowed to save shortly before failing a mission which meant I had to start from the beginning.

The same mission involved tracking an enemy commander through an outpost but unfortunately the path he took led me through the middle of a number of enemies I could not avoid, and once the commander became alerted to my presence due to all the bad lads shooting at me he refused to return to his original path, meaning I couldn’t complete one of the side missions.

Sniper Elite III Ultimate Edition looks great on Switch. The African landscape is beautifully realised and character models look great. Furthermore performance is strong, and the game runs at a mostly stable 30fps, with only occasional stutters. Explosions don’t look good, but were likely toned down to prevent frame-rate issues, which feels like a reasonable trade-off. Handheld performance is decent, but some may find it hard to see what they are aiming at on the small screen. This isn’t helped by the lack of nuance provided by the Switch’s analogue sticks.

Audio is pretty strong throughout, and crucially your gun sounds absolutely massive. On the downside, you’ll notice the same voice clips being re-used for enemies over and over again and the voice acting for Karl is pretty predictably gruff and menacing. Music in Sniper Elite III Ultimate Edition sounds like something from a World War 2 film, which is probably what you want really.

Sniper Elite III Ultimate Edition offers a decent chunk of content for the price, and if you enjoy the gameplay loop you will be kept busy for a good while. The multiplayer modes are fun, but it remains to be seen whether they will be populated going forwards.

Sniper Elite III Ultimate Edition is an excellent port of the original game, and feels right at home on the Switch. Unfortunately repetitive gameplay prevents it from achieving greatness. Nevertheless I would like to pin the Thumb Culture Silver Award over its heart.

This game was provided for review by Rebellion Developments.