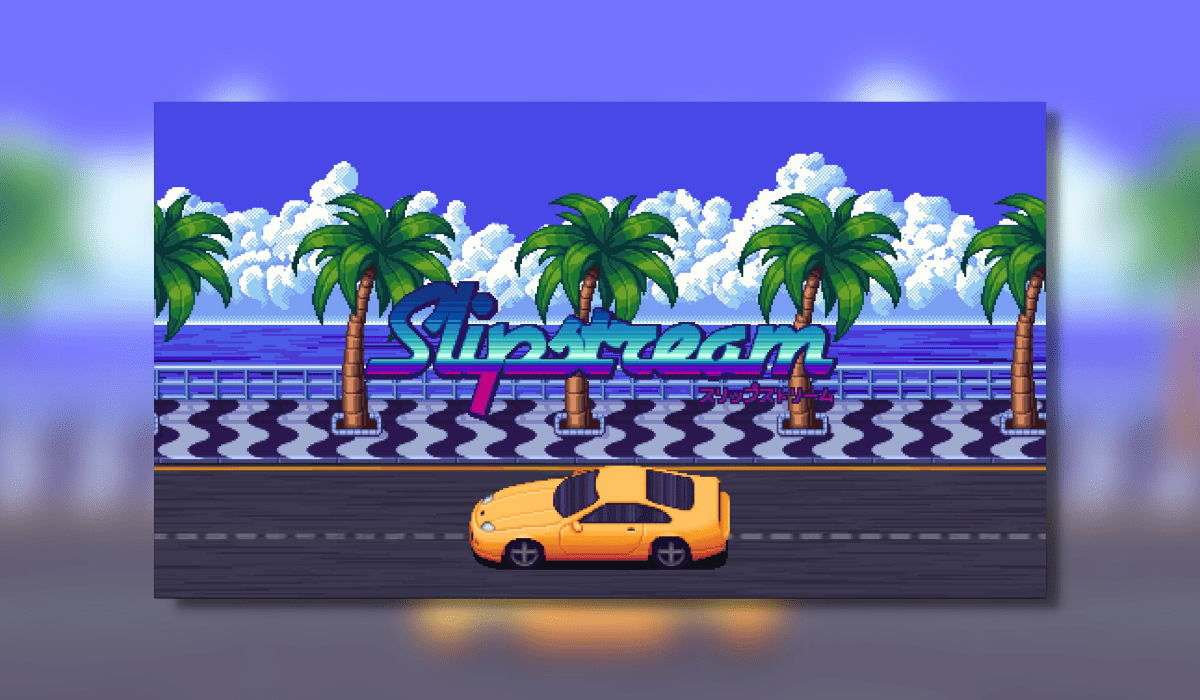 Fans of OutRun and Sonic the Hedgehog 2 unite, for Slipstream is finally here on consoles. The game started out as a Kickstarter project way back in 2016. After reaching nearly $7,000 in backing, it finally came to fruition on PC in 2018. Slipstream was developed by a single developer, Brazilian Sandro Luiz de Paula of Ansdor Games.

If you’re into your retro-styled arcade racers, then you are in for a fun, yet frustrating time. For what it lacks in complexity, it more than makes up for it in its mastery. Slipstream is available from April 7th, 2022 on PlayStation 4, Xbox One, and Switch and it’s also playable on current generation consoles through backward compatibility.

So, let’s put the pedal to the metal and check out this love letter to SEGA games of yore.

So I am going to start out by saying that this is a bit of a retro gamer’s wet dream. Looking at the cover image up top, you wouldn’t be blamed for thinking this is a Mega Drive game because that would be a perfect cartridge label. The gameplay is fun and increasingly tough. Take the smooth synthwave soundtrack and marry it with tasteful and esthetical visuals, and you get a harmoniously great game. There are only five cars to choose from styled roughly from some of our 80’s favourites. You get to race over a variety of courses across six modes. These are Grand Prix, Single Race, Time Trial, Grand Tour, Cannonball, and Battle Royale.

If you are familiar with racing games, then you will know how self-explanatory Grand Prix, Single Race, and Time Trial are. Grand Tour has elements commandeered directly from OutRun. You will race over a number of stages, attempting to beat your rivals who themselves are inspired by 80’s icons such as Bob Ross and others. After each stage, you can choose which direction to take to advance on to the next stage. Keep an eye on the time though because if you don’t hit the checkpoint, it’s game over.

Cannonball Mode is a nice little nod to the Cannonball Run movies where you select a number of tracks and race them back to back. Everything in this mode is customisable. You can add rivals and traffic so it can be as chilled or as chaotic as you would like it to be. This particular mode is for those who favour a self-imposed challenge. Lastly, Battle Royale cashes in on the popular namesake but is essentially an elimination mode where the winner is the last car driving.

The key to mastering Slipstream is controlling your drift. This is no easy task when you are battling rivals, opponents, and traffic driving like it’s always a Sunday. Even on easy mode, this can be quite challenging. Fortunately, you can make life easier by slowing down the speed of the game in the pause menu. This gives you a bit more time to plan when to start your drift. Overall this does take away from the sense of speed. But, this is helpful for learning the tracks and you can gradually increase the speed of the game to further challenge yourself.

Thankfully there are a couple of things that will help you gain the upper hand. Entering a vehicle’s slipstream will give you a temporary speed boost. Additionally, if you do find yourself planted in the barrier, there is a rewind function that will allow you to go back as far as five seconds to correct your mistake. While there is a proximity indicator on your HUD letting you know the distance to your next rival, the omission of a map is a slight oversight. A lot of these corners are quite blind and can catch you off guard ruining your groove. Having a mini-map would be ideal just so you have an idea of what corners are coming up.

In keeping with the games of yore, Slipstream does offer split-screen multiplayer for up to 4 people. This is obviously great if you don’t like your mates. In all seriousness though, it is pretty fun and with all that speed going at once, the frame rate does not skip a beat.

Pixel-perfectionism is the order of the day here. It uses modern ideas to recreate the early 90’s racers and paints it with a rose-tinted nostalgic glow. The sprites are non-wavering at high speed and the environments are bright and beautiful, yet inoffensive. At a glance, yes this may look like a cut-and-paste of OutRun or Super Hang-On, but it is much more that. This is a very well written love letter to yesteryear. A representation of true passion for the source material.

If you want to go really authentic, then you can try the various graphical modes. Retro gamers do love their scanlines so its worth a try with the CRT and NTSC filters.

Of course you can’t cruise the highway without some decent tunes, and Slipstream has plenty. There is quite the range covering electronic styles from lo-fi slow beats, to high octane, futuristic dark synthwave. As a huge dark synthwave fan, these styles were my main jam. One track in particular stood out for me called Final Pass FM Cover (Extent of the Jam). It starts off like a Streets of Rage tune as the title adorns the midnight cityscape, then out of nowhere it’s giving me Road Rash vibes. Absolutely love it. What’s more, is that you can choose what track you want to listen to at any time.

Kudos to artist Effoharkey for creating a soundtrack worthy of a road trip. As it is also on Spotify, I know what I will be listening to as I’ll be dodging the oncoming flock of tourists on the A30 this summer.

Playing the game using default settings, this might see you good for up to seven hours. But, with games like this, back in the day  we would replay them so much because we just didn’t have a lot of games. So we would set challenges for ourselves, memorise the tracks and see who was the quickest. With different difficulty settings and being able to change the game’s speed it offers you in-game challenges which will keep you going quite a while longer.

I have nothing but praise for this game. Even with the omission of a mini-map, it is mitigated with the rewind feature. I had fun playing ‘Spot the Sonic Reference’ when driving on courses such as Emerald Hills, Oil Ocean and Chemical Plant, and there are many more. The game doesn’t break any new ground, but it is a breath of fresh air in a world where realism is a key focus. It looks old but feels new with super tight control, it’s retrotastic!

Slipstream can sit comfortably on the top step of the podium with the prestigious Thumb Culture Platinum Award.

One thought on “Slipstream Review”