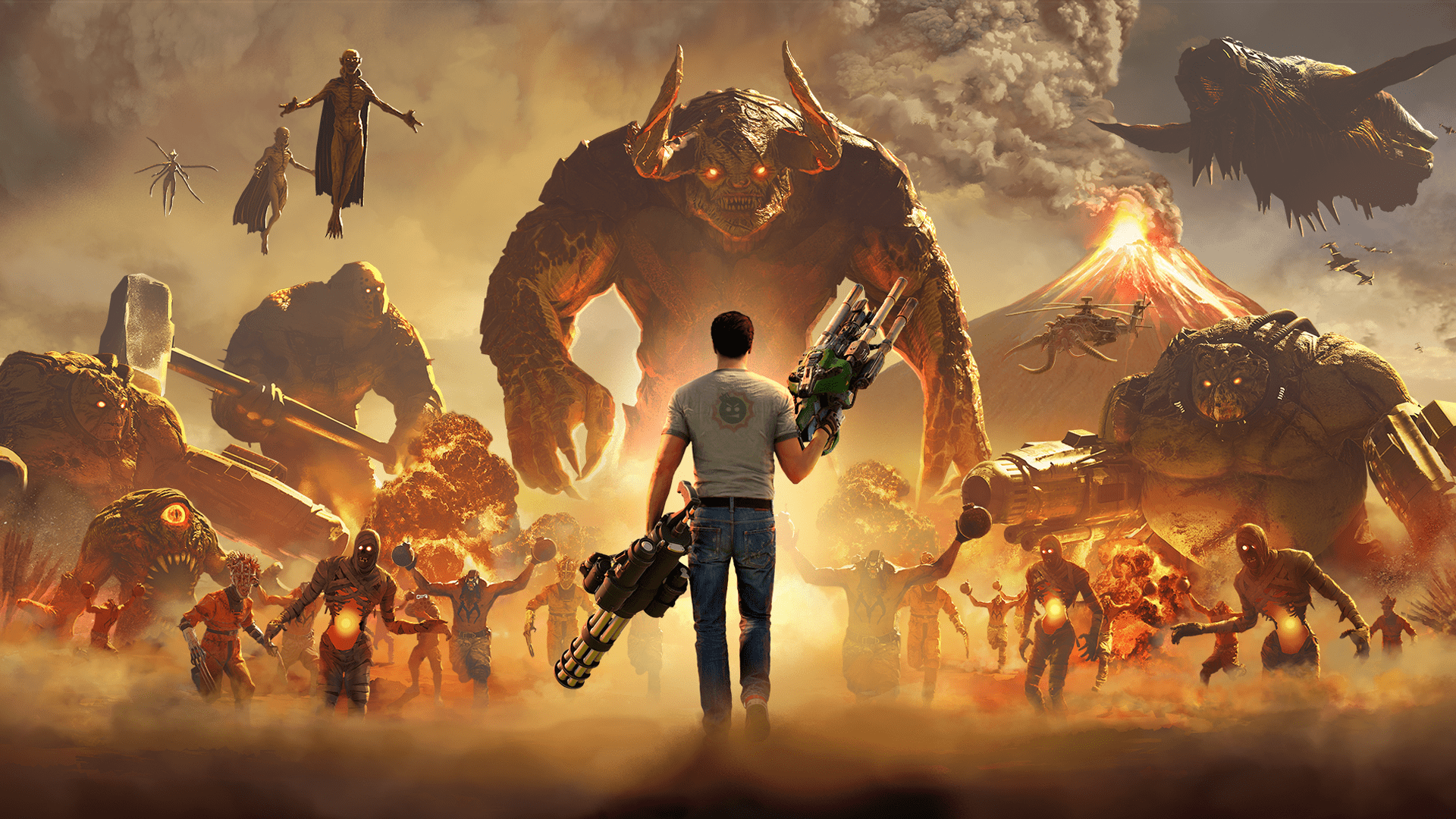 I’d like to welcome our newest writer to the team, Aaron, who has taken Serious Sam 4 out for a leisurely stroll and possibly carved up an alien or two in the process!

Serious Sam 4 by devs Croteam, brought so much nostalgia back for me! I loved playing these games as a kid and I’m glad I got the opportunity to play the newest Serious Sam. In this all-out fun run and gun game, I can guarantee you’ll have a lot of crazy fun and a few moments of frustration. As expected, Sam is still his badass quirky self you grew to love in the previous games. Fast and fun what else could you ask for!

As soon as you get into the game you are faced with a lot, and I mean a lot, of big aliens/monsters of all sizes.  Armed with a massive minigun in your hand you have just one thing to do…..shoot them all down! Unlike most typical games, you do not get greeted by a tutorial because you do not need one! You simply have one mission and that is to kill all of the aliens and make it to the boss at the end of each level. As I was playing through Serious Sam 4, it became quite obvious that the boss fights at the end of each level were not the main focus of the game but instead simply surviving the horde after horde of aliens that were coming at you from all directions.

The gameplay in Serious Sam 4 feels a lot faster and easier, making it a lot more responsive to get the shot off compared to Serious Sam 3, I definitely noticed the difference between 3 and 4 when I had a massive horde of aliens coming at me and I was trying to run and shoot and kill. In Serious Sam 3 you seemed to stop while reloading as well as having your motion slowed down when running and shooting, however, in Serious Sam 4 they seem to have made this a lot more fluent, leading to a much-improved gameplay experience.

The multiplayer options are limited to just co-op story, therefore you do not get the survival mode like there was in the first 2 games, however, the developers have been talking about adding mods to the game and are looking to bring them to us in the near future.

I was happy enough playing Serious Sam 4 at 1080p and I decided that I didn’t need to push the game to the limit as in my eyes it was perfect, therefore I had no need to further the resolution. The look of each map is great and I especially enjoyed the shadows of each area which gave some superb hiding spots for aliens that gave them the edge over you so that they could jump on you from behind for a surprise attack. The lighting is great so when you are stuck in the shadows you can still see enough to get that shot off. The aliens/monsters seem to be a lot easier to see and are brighter in the light so you can spot them most of the time (just check behind you)!  I can’t fault the way that the game looks, from my experience with Serious Sam 4, I didn’t have any trouble getting through the levels or finding the armour, health and ammo as they all stood out enough for me.

Serious Sam 4 features a full-blown action-packed soundtrack courtesy of Damjan Mravunac, the original composer of the other Serious Sam games.  Each track accompanies the level brilliantly, really immersing you into the chaos.  The sound effects and voice acting was good and I found that after a while of playing the game I could easily identify which monster or alien was coming for me and this enabled me to quickly switch my guns as fast as possible to the correct one, ensuring I would not miss the lunatics or bombers coming for me. All of the weapons sound fairly similar with not too much differentiation however let’s face it, you’re here for the carnage!

Serious Sam 4 isn’t a massive game, but you’ll get around 10 hours, maybe a little more, of story gameplay to have fun with on your own or with a friend via co-op. You will discover optional side quests as you progress through the levels and you also have secret areas where you can find weapons or much-needed armour.  Essential when facing the bosses! I  had a lot of fun playing this game both on co-op and alone, I found myself wanting to come back and pick the game up and carry on playing as much as I could.

When I picked up Serious Sam 4 to review I was worried it could ruin my childhood memories of the fun I had playing Serious Sam 1,2 and 3 from 10 years ago.  Thankfully, I found myself engrossed in this game and although the storyline was not the most amazing, it was still fun enough to add to the explosive gameplay.  I especially loved the quirky comments that Sam himself comes out with, usually at the most inappropriate moments. I would have loved to of had a survival mode option in the game to continue the fun and mayhem after finishing the story mode, however, it still hasn’t stopped me picking this game up to play again and again, especially with friends. If you have played the old Serious Sam games, or even if you have not, but fancy some run and gun fun on your own or with friends, then Serious Sam 4 is the game for you!  The perfect stress buster! 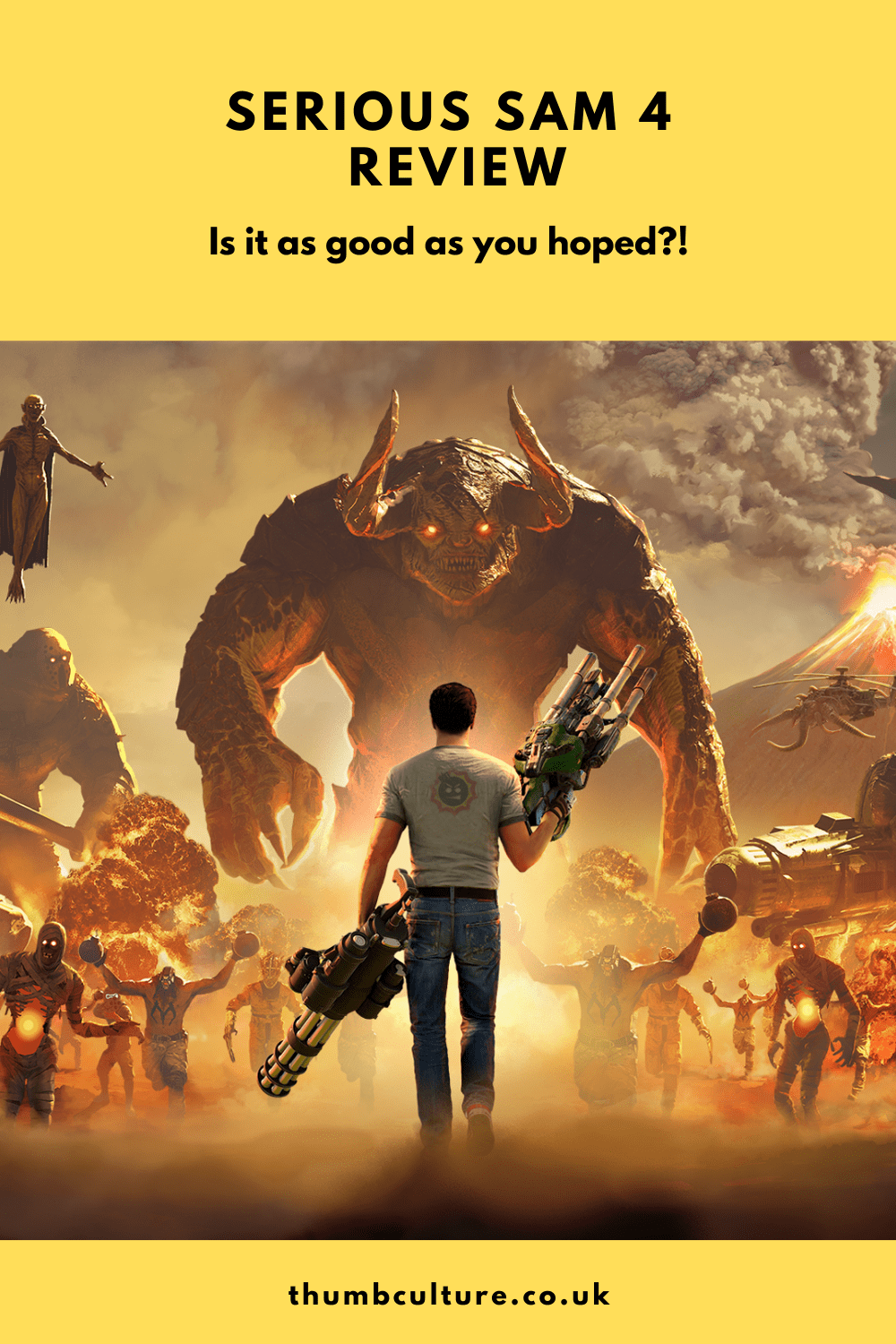