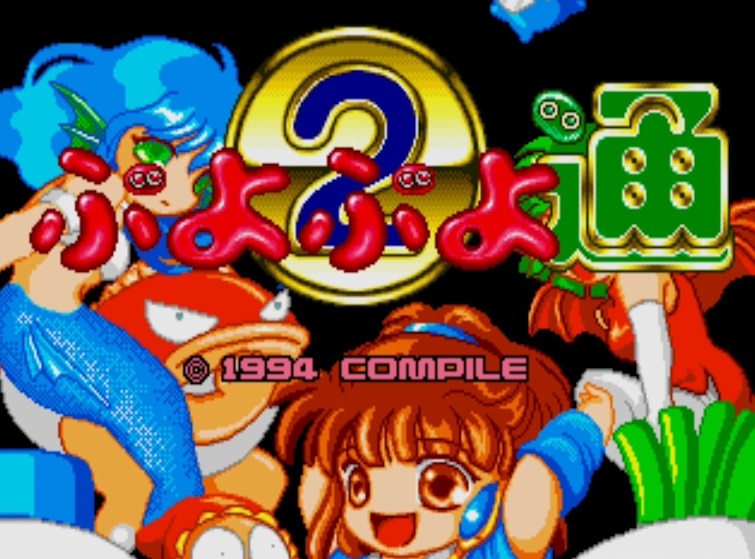 What is a puyo? Collins dictionary defines it as a coarse woollen poncho, native to the southern cone of South America. Students of Korean history, meanwhile, may recognise Puyo as the name of an ancient kingdom centred in Manchuria. In Sega Ages: Puyo Puyo 2, a Puyo is er…a slimy blob of something.

Fortunately for the gamers amongst us, this review will focus on the slimy blobs and not Argentinian outerwear (although if Thumbculture does offer up ponchos for review, I will be on them faster than a Clint Eastwood impersonator with cold shoulders).

Anyway, enough small talk – Sega Ages: Puyo Puyo 2 is another release by developers M2 of a classic game from the past. So how does it hold it up after a couple of decades in the attic? Let’s find out!

Honestly, there have been so many versions of Puyo Puyo over the years, it’s likely that even the most casual gamer will have come across one at some point in time. If, however, you’re one of the unlucky few, the easiest way I can describe it is as a competitive puzzle game which is a bit akin to Tetris. Rather than attempting to complete rows, however, you’re instead trying to link together matching colours of the aforementioned puyos to make them disappear from your side of the screen, and reappear on the opponent’s end as ‘garbage puyos’. This will almost certainly mess up their own efforts at matching and, with a fair wind, lead to a cycle of despair, causing their screen to fill to the top with the critters and crushing defeat.

Much like in Tetris, you can rotate the puyos (which come in pairs), and drop them quickly by hitting down on your controller. The real art in the game is keeping an eye on which pair of puyos will be coming next (you can see the next two pairs you’ll be receiving in the middle of the screen), and planning ahead to try and make combos. The more you can combo, the more garbage you send to your opponent.

It’s a deceptively simple concept, but when the game picks up speed, it can become a frantic affair. If you’re winning, you feel on top of the world. If you’re losing, it feels like your boss coming over and dumping more and more reports on your desk,  even though you’re still trying to shred the previous ones. N.B. repeatedly shredding your work in front of your manager is a ballsy move, and I recommend joining a union if you’re considering this action.

To be honest, that’s about it for gameplay – there are a few additional tricks to beating Satan (that’s not a misprint – more on him later!), but I won’t list them here, as M2 has very kindly produced an in-game manual that covers these off nicely. It’s something I wish more developers would do and adds a touch of quality to the release.

All very well for the newbies then, but what about experienced Puyo Puyo 2 players? What can they expect in terms of new features? Well, this is a classic game, so don’t expect the earth, but there are a few tweaks over the original release – most notably the fact that it’s (mainly) in English! There’s also the opportunity to rotate blocks both clockwise and anti-clockwise and to do a ‘quick-turn’ of the puyos if you’re in a really tight space. Revolutionary only in the literal sense, perhaps, but it’s a nice addition. There’s also an optional ‘rewind move’ feature if you can’t cope with the way the game plays, you bloody coward.

The game itself is contained within the Sega Ages menu ‘wrapper’, and game options include the classic arcade mode (literal ‘insert coin’ stuff!), a 2-player versus mode, with three mildly different game types, and an endurance mode. There’s also an online matchmaking service, but I couldn’t for the life of me get it to find a game. That being said, I am writing this review sometime past midnight, and even the greatest Puyo Puyo players in the UK need to sleep at some point. Not me though. I’ll never sleep. I’ll drop garbage puyos on you in your dreams forever! Muhahaha!

This is a 26-year-old game, so what you’re getting is 16-bit graphics. That’s absolutely fine, however – everything looks perfectly clean and colourful. One thing worth mentioning though is the option to change the shape and colours of the puyos in the options menu provided. At first, I thought this was purely a slightly pointless cosmetic feature but, upon research, I discovered that this can actually really benefit people who are colourblind. That’s a really thoughtful touch.

Seeing as there’s not much more to say on the technical qualities of the graphics, I’d like to turn to the in-game characters you play against because, quite frankly, I’ve no idea who designed these things – someone who read Dante’s Inferno whilst having an acid trip, probably. There are a good number of horrifying designs, including a guy with one massive foot, an angry fish with arms and legs, a guy randomly called Schezo Wegey (who’s apparently meant to be a pervert) and Satan.

Yes, the lord of darkness is the end boss. I wish I could tell you what the actual plot was supposed to be but, I am once again, clueless. The game involves you defeating opponents to advance up some sort of tower. Once you defeat Satan, represented here as a green-haired and horned angel, you launch the structure, rocket-like, into a red planet which blows up. Where the hell the puyos fit into this plotline, god knows. It still makes more sense than the plot of Death Stranding though.

This is a port of an old game and, because of that, you wouldn’t expect an audio extravaganza. Which is a good job, because you’re not going to get one. It’s standard arcade fair – bleeps, bloops and some fairly generic (but not offensive) music of yesteryear.

The one player mode isn’t really extensive (you could easily beat it in around thirty minutes if you were a decent player). Whilst the difficulty can be increased, it’s unlikely to encourage you to revisit the mode. Likewise, I can’t really imagine the endurance mode keeping you away from that ten-part Korean history documentary you’ve been binging on.

This game is all about the versus mode – it’s you and your human enemy one-on-one to the last puyo. It always has been and it always will be. Thing is, one-on-one is the operative term, as this is only a two-player game. A quick look at the Switch store reveals that for just £8 (£2 more than this particular release) you could get Puyo Puyo Champions, which includes a four-player mode and some additional features such as a tournament mode for up to eight players.
Whether or not you consider Puyo Puyo 2 to be worth the outlay might, therefore, depend on the number of people you normally game with, and whether you prefer the retro feel (which this reviewer does). Alternatively, you could just buy both!

Puyo Puyo 2 is a classic game for a reason – it’s simple, fun, and challenging. It might not be the most fully-featured of games, given it’s a vintage product, but it’s not aged shabbily at all. I’m particularly impressed with the work M2 have put into the release and I think the price point is just about reasonable.
Still, you’re really buying this game for the classic two-player fun and, if you’re not into that (or just don’t have any real friends, like me), then this game probably isn’t for you.

If, however, you and your friends love competitive puzzlers, then dip into that poncho saving account and pick up Puyo Puyo 2 today. It deserves its Thumb Culture silver award.