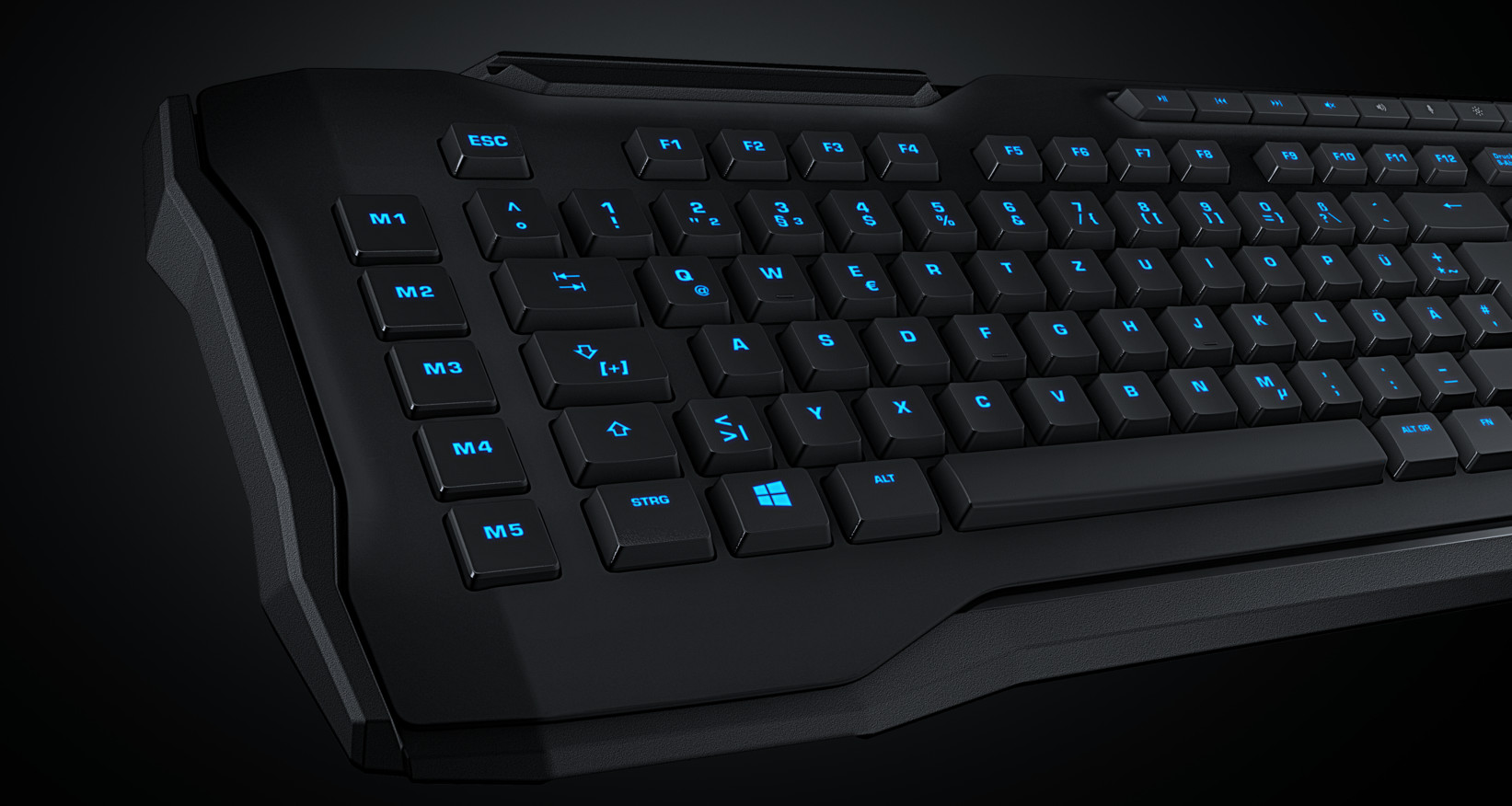 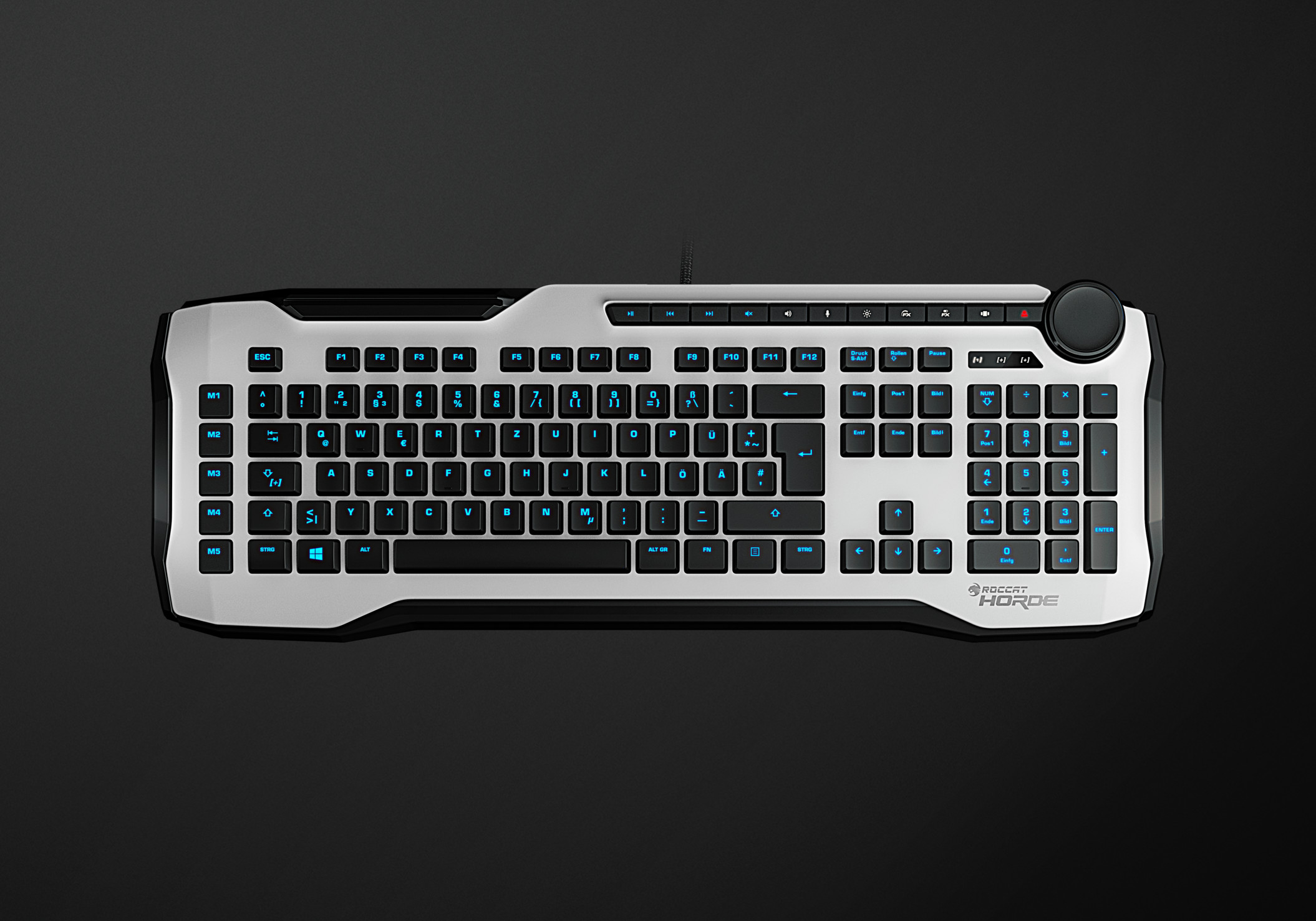 No, I didn’t just make up that word!  Roccat has designed a wired gaming keyboard that allows the keys to have a fast midway actuation which in simple terms means that when you press a key, the fast response will allow the signal to be registered quicker than on a standard membrane keyboard.  According to Roccat, the Horde will respond at 7.8ms while the customisable macro keys that you can see down the lefthand side will take just 5.0ms to register thanks to their shorter distance to travel when pressed.  In comparison, a standard membrane keyboard will take 9.0ms to reply while an average mechanical keyboard around 6.0ms. 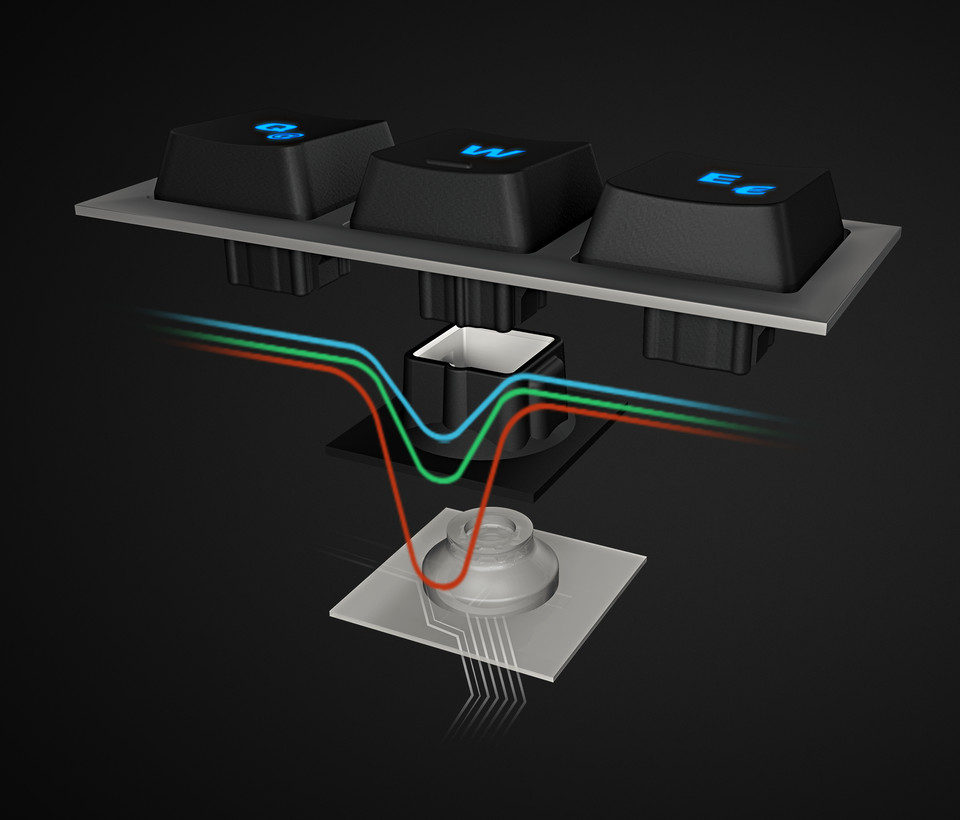 For pro gamers, I totally understand that saving on the odd millisecond here and there can mean the difference between life and death, however, I could not massively notice the difference when gaming, it was nice however to not upset the wife with the constant clicking and clacking sound that a mechanical keyboard makes!

With the large gaps surrounding the keys I was a little concerned at first with the accumulation of any dirt or debris as membrane keyboards are notorious for collecting rubbish.  I was pleased to find out however that each of the keys is in fact in its own upstand, therefore resisting any falling crumbs or dust!

So, what other features does the Roccat Horde have in store for you?

You have probably spotted the large circular dial on the top right, no this isn’t just a quick volume up/volume down spinny affair, it is officially known as the Tuning Wheel. 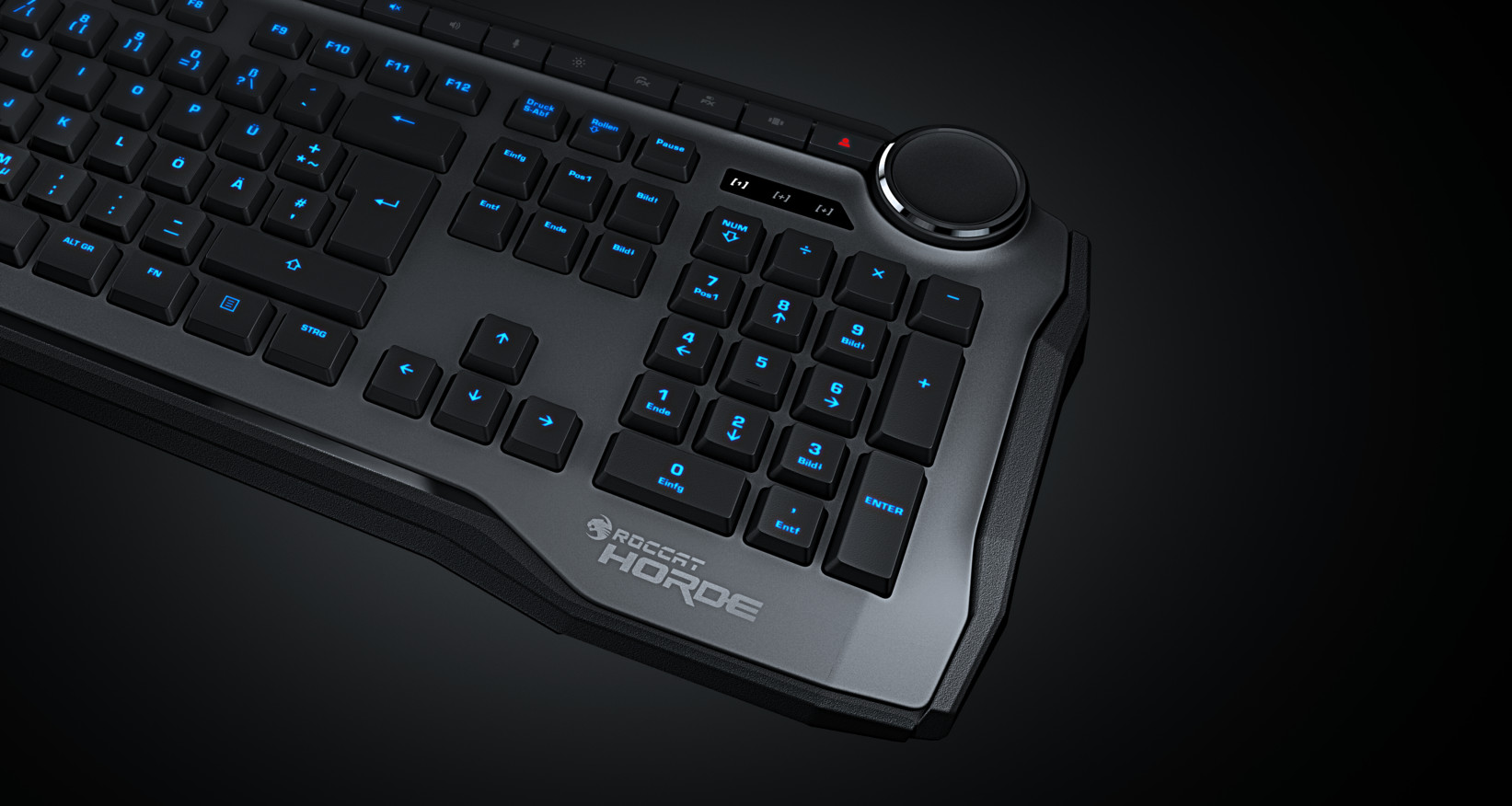 Working in partnership with the rectangular keys to the side of the wheel that light in a cool red colour, you can select and control not only the volume, but the keyboard brightness and illumination style, dpi as well as your very own hotkeys.  Rather than aimlessly spinning, the wheel feels great when turned as it moves 360 degrees in 20 tactile steps making it feel precise when used.  The wheel is also fully compatible with the Windows 10 dial functionality.

Now nobody enjoys it when a keystroke is lost due to the inability of the keyboard to understand the many signals that are being rapidly generated.  Thankfully due to Roccat’s anti-ghosting algorithm technology you can press as many keys as you like on the Horde and they will all be registered.  Brilliant for fast typers, bad for people with fat fingers.  I found the keyboard to be very responsive when typing and the action below my fingers gave the feel of the springiness you would usually associate with a mechanical keyboard.

Finally, there is the illumination of the keyboard to talk about.  On the Horde, Roccat has kept it relatively simple with the majority of the keys gently illuminated in their trademark blue.  The options via the Swarm software allow you to select a few different visual effects.  For me, I enjoyed the fully lit style so that it did not distract me if I needed to look down for any reason. 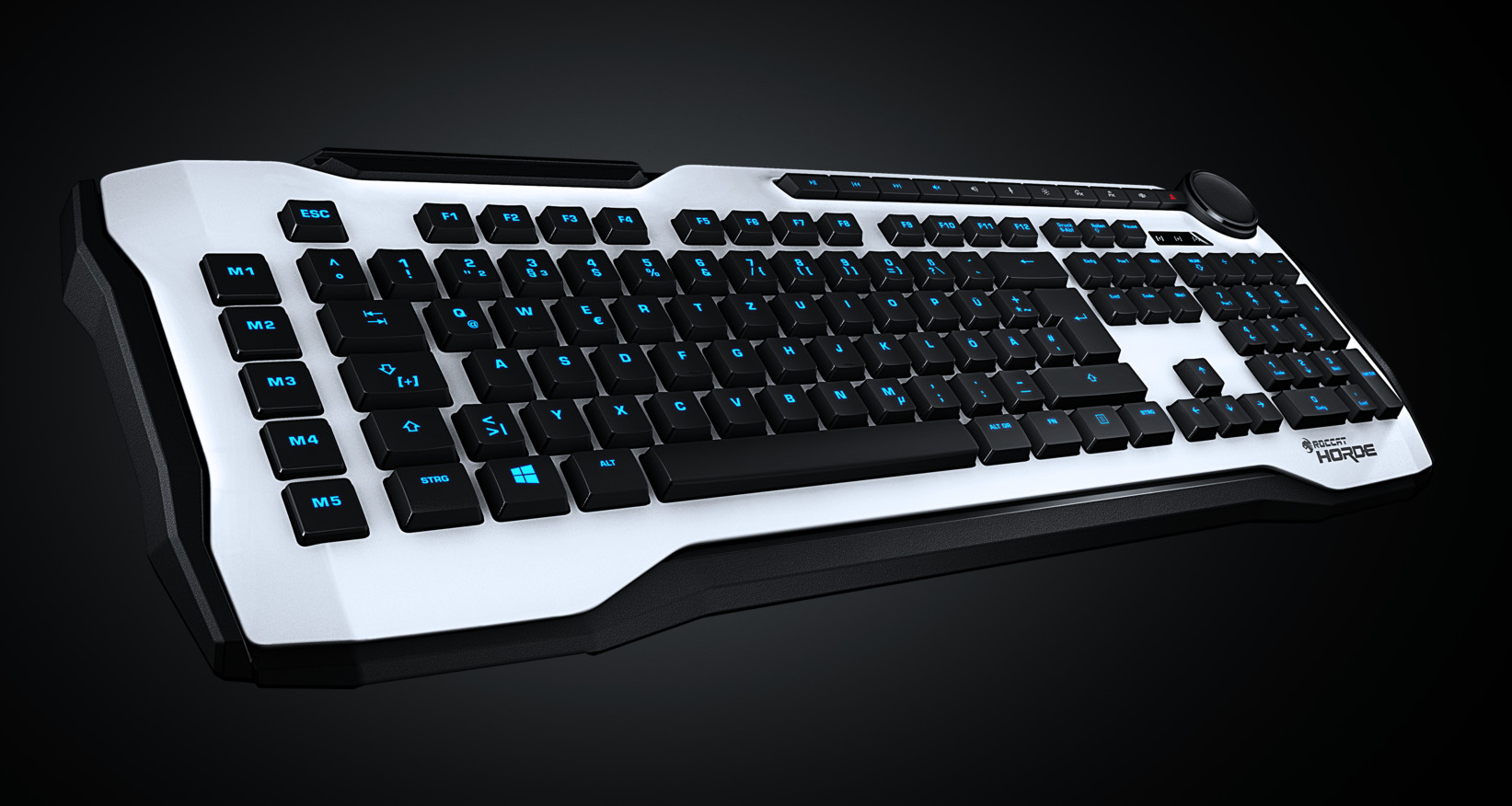 The Roccat Swarm software is once more your go-between when it comes to configuring the macro keys down the side as well as the hotkeys.  I do love the way that you can create profiles for each game and setup the functions as you require them.

Overall, the Roccat Horde membranical keyboard is of a sturdy design-build with a decent weight to it.  The keys have a good actuation to them and offer a fast consistent response upon every press every time.  Retailing at £69.99 on the Roccat website, once more if you hunt around you can find it for around £40 on other sites.  The value for money for this keyboard is brilliant!