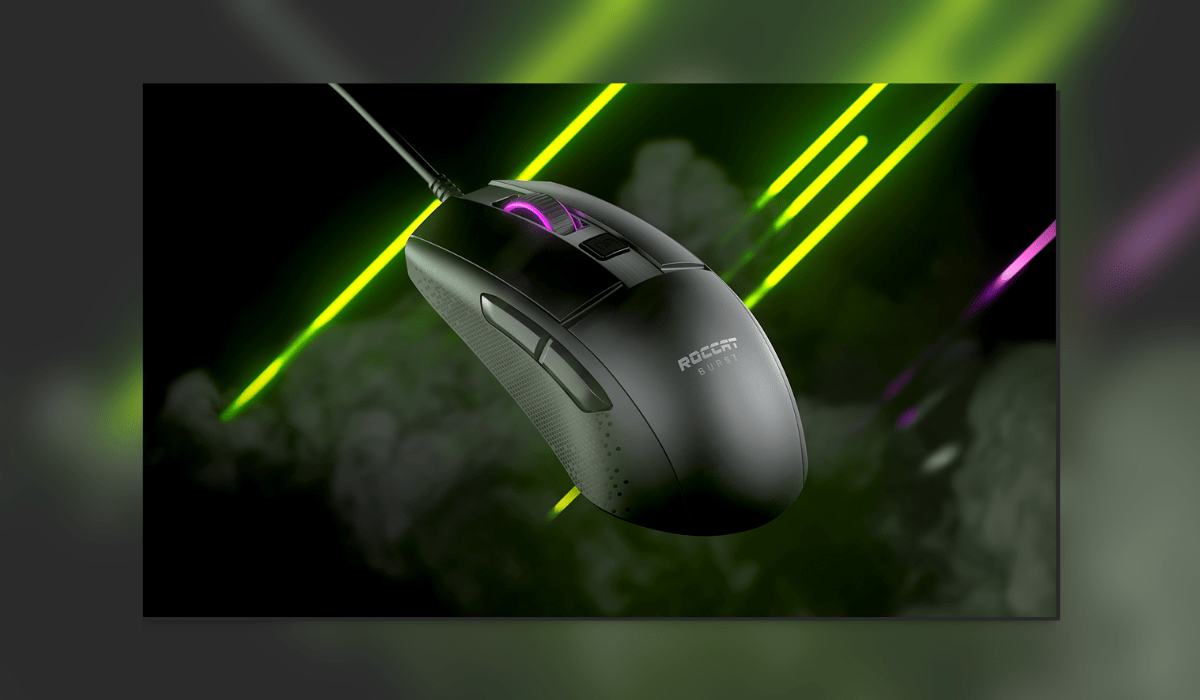 Gaming mice are in abundance. It almost feels like everyone and their mums are making gaming mice. They have been steadily getting lighter and lighter and now Roccat brings us a light little mouse. The Roccat Burst Core weighs 68g. But what does it mean? Let’s dive in and find out.

This new lightweight mouse has burst onto the scene

Do you have a favourite gaming mouse? Let us know in the comments what mouse you use and whether you are looking for an upgrade.

The Roccat Burst Core is a standard looking mouse from the outside. The traditional shape on show here. However, dive beneath its surface and what you have is a pretty feature packed gaming mouse.

Let’s circle back round to the weight, only 68g. This is achieved by having a solid honeycomb shell underneath that tough exterior. Roccat have sent a message to their competitors by stating that dotting the exterior of the mouse to reduce weight feels like cheating. I mean, I see their point. Having this shell with reduced material helps keep this mouse on a diet.

The Roccat Burst Core has the traditional two-button layout on the top, an RGB lit mouse wheel that also doubles as a button, and then two buttons down the left flank. In addition, you have a DPI button on the top of the mouse allowing a quick change to your DPI settings, up to 8500 DPI. The switches in this mouse are the latest Titan Switch Optical, check out the video below to see these switches in action. Thanks to the Roccat website for the video!

In a slight nod to the honeycomb holes that are punched out of the internal shell, there is a nice subtle design down both flanks of the Roccat Burst Core. The entire design of the mouse is spot on, and it looks great when sat next to your keyboard.

If you are wondering what kind of grip type you will need to make use of this mouse, then fear not because this mouse should suit any grip type. Due to the ergonomic design it applies itself across the board.

In action, the mouse is great for both gaming and general day-to-day jobs. I personally used this one for an elongated time for work. Having the nice solid clicks from all the buttons all around making you know you are pressing some great switches. Add the lightweight of the Burst Core, I didn’t experience any fatigue during my play testing.

Using the Roccat Burst Core for gaming though is where its real quality shines. That light weight of the mouse allows quick flicking for those high-pressure moments, and its responsive optical sensor just gives you that reliability that every movement will be replicated on screen.

Even though the mouse itself may be limited in total number of buttons, it does have the advantage of Easy-Shift. This when combined with a Roccat keyboard will give you the option of doubling up on your options.

With the Roccat Burst Core being tested to 100 million button clicks, you know that you are going to be using this mouse for a long time to come. Giving that reliability that when you come to play your favourite game, your mouse will be there waiting.

If you have a Roccat Keyboard and even one of their RGB headsets, you can sync up all that pretty RGB lighting using the Roccat Swarm software. Want to make it all one colour, want to make it ripple with every keypress, or even just want to set them individually. Well, all of that is possible with the Swarm software.

So as with most gaming mice with their own software suite, you need that internet connection to be able to download it in the first instance. Make sure you have at least a USB 2 on your motherboard, otherwise this mouse isn’t going to work for you.

In terms of operating systems, as long as you aren’t still running on Windows Vista, I think you will be fine. Unfortunately, if you are an apple user it doesn’t appear that you can get the Roccat Swarm software, so this mouse will just operate in its standard configuration with no customisation possible.

If you are looking for a premium feeling mouse, but are on a budget then the Roccat Burst Core might be right up your alley. With its low price of £24.99 you honestly can’t go wrong with this one. Full of features, and light to boot. Along with the Titan Switch Optical buttons and its 68g, it’s a phenomenal investment if you are after something new. Granted it isn’t wireless, but seriously at that price point, are you surprised?