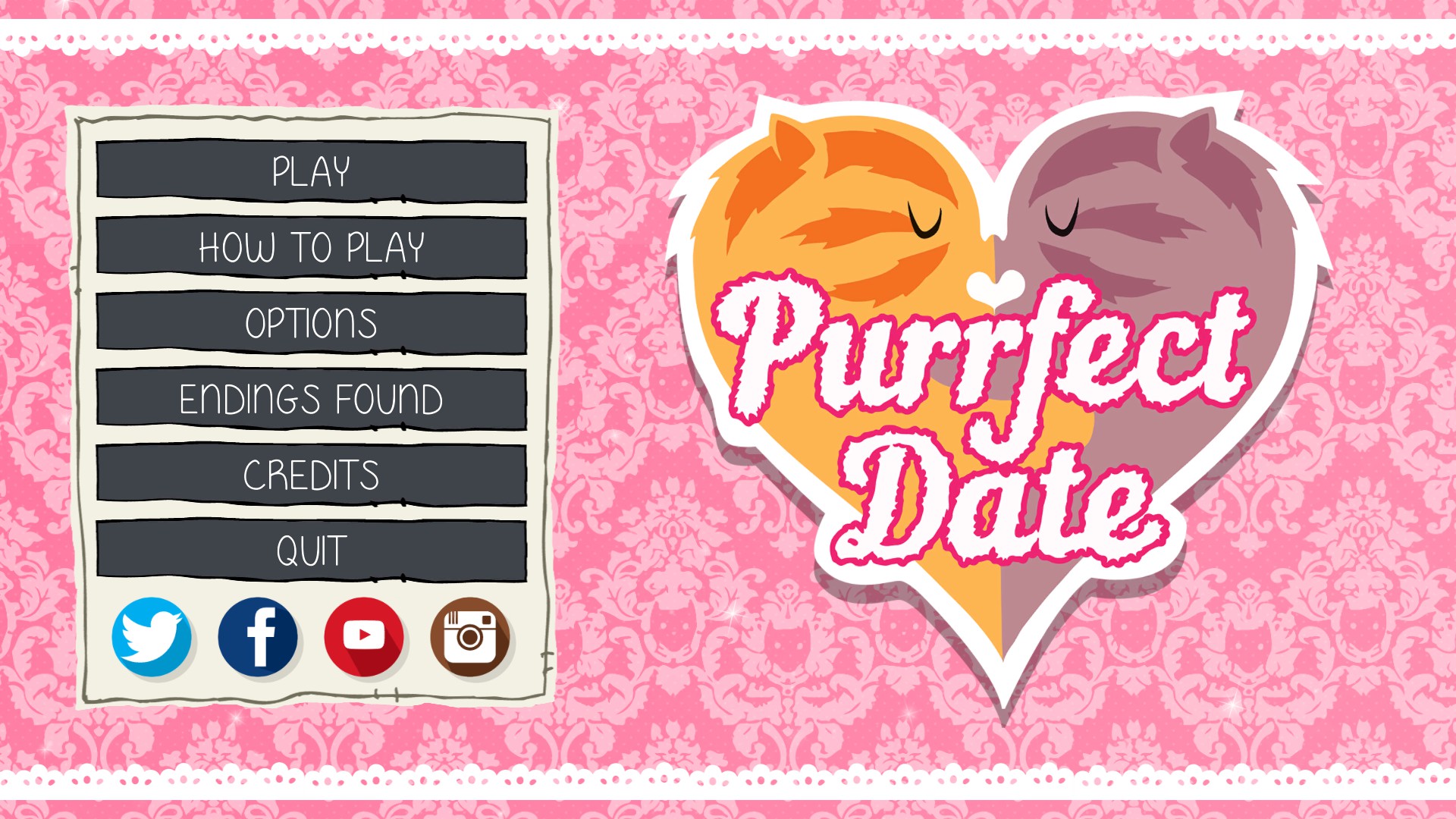 Bae Team have decided to give a spin on the dating sim by adding furry felines to the agenda. The question is, will Purrfect Date be the cream of the crop, or pussy whipped into oblivion?

Purrfect Date, as the name suggests is a cat dating simulator. I know what you are thinking, why? Why would anyone create such an experience? Well unfortunately I cannot answer that question without a little time playing with my ……. cats.

I started as a human. I chose a name. I wanted to be called Dick Whittington, but that was too long. So Dick began his adventure with the famous Professor Pawpur. Dick gets shown the famous Cat Island and to his tent and then his equipment. Have a drink? Don’t have a drink? What drink to have? The sense of realism and decision making was finally upon me. Dick wanted tea, but Dick got coffee. Dick was gutted. The experience entails just pressing space a lot, or to mix it up a bit I could use the mouse. I also have a heart to click on if you so desire for additional pulling power. The decisions that I actually had to make were very few and far between, I basically just read the story (didn’t forget the heart though).

At the beginning I was taken to the bad end of the island and started to feel nauseous (in the game). I became infected with a strange disease that will turn me into a cat. The cat’s lured me to the bad end so that I would help them, so basically blackmailed. Also this allowed me to talk to the cats who all have different personalities.

I had to choose between romance, recon or research to do with my energy, or rest when I needed more energy (Excellent alliteration guys) . Choose wisely though, the whole experience could change with a bad decision.

I must confess to not really understanding the dating element to the game. I got the humour when it was there, although it wasn’t really my speed, I understood the plot, but the dating was beyond me. Given the choice of a cute furry feline friend or a gorgeous vivacious woman, I know which way I would go every time.

The cats all have personalities, but these are not deep complex personalities, they are a little obvious and cliché. The Irish cat likes to drink? Really? Didn’t see that coming. The only surprise of the game is that I managed to play it for long enough to be able to write an honest review. No unexpected twists to the storyline, no real imagination, the script wasn’t great, though a lot of it was written exactly as I would expect a cat to talk. The main issue I had with the game was why put the text in 1st person? That takes away the whole point of the game for me. Instead of me trying to win the game, I was trying to get my 6 characters to win the game. I felt cheated that it wasn’t me in the game. The people you play make decisions that I wouldn’t have and I felt like control isn’t truly yours.

There are various endings that encounters can have, and just like Pokémon, you can collect them all, so keep an eye on your stats to track your efforts.

When writing a dating sim you want sexy sassy characters, debonair and suave. Unfortunately what you get with Purrfect Date is simply a collection of badly drawn cats in badly drawn locations. Some of these creatures look like they have been in accidents, bad accidents. I was hoping for more of a Jessica Rabbit, but what I got was Bugs Bunny, and not even in drag! My desire to actively pursue these felines was not in abundance.

Fortunately Purrfect Date has the option to just turn it off. I honestly have no words. The game needed sound and sound it got. It failed to add to the atmosphere, with it’s incessant plinky plinky. Music isn’t always essential for a game, but used correctly it enhances the experience. #justsaying. There are cat noises as well, these are truly very realistic and do sometimes make it feel like the cats are talking. I would leave these effects on for realism.

With graphics that look like they were drawn with the artist’s bad hand, music that sounds like an 80s Casio trying to play Brahms and gameplay that would be considered ok for a ZX spectrum. This game has very little going for it unless you are a cat lover, a serious cat lover, we are talking over 30 at least. Purrfect Date is anything but perfect. This is a game where humans try and date cats. Humans, date cats! The concept should be locked up in an asylum and the key swallowed by a mermaid who lives in Atlantis, because it’s crazy. I really wished I had been at the meeting where this idea was pitched and others said ‘Yeah, that rocks, we have a winner on our hands here’. That day needs to go down in history as the day Rumpelstiltskin should have made not happen. Purrfect Date is targeted at a very niche market, a niche market where I will not be shopping.

This is Bae Team’s first foray into game writing, and with a better script, graphics and music, I hope that their second foray will be closer to purrfect.

One thought on “Purrfect Date – Will You Get The Right Pussy?”