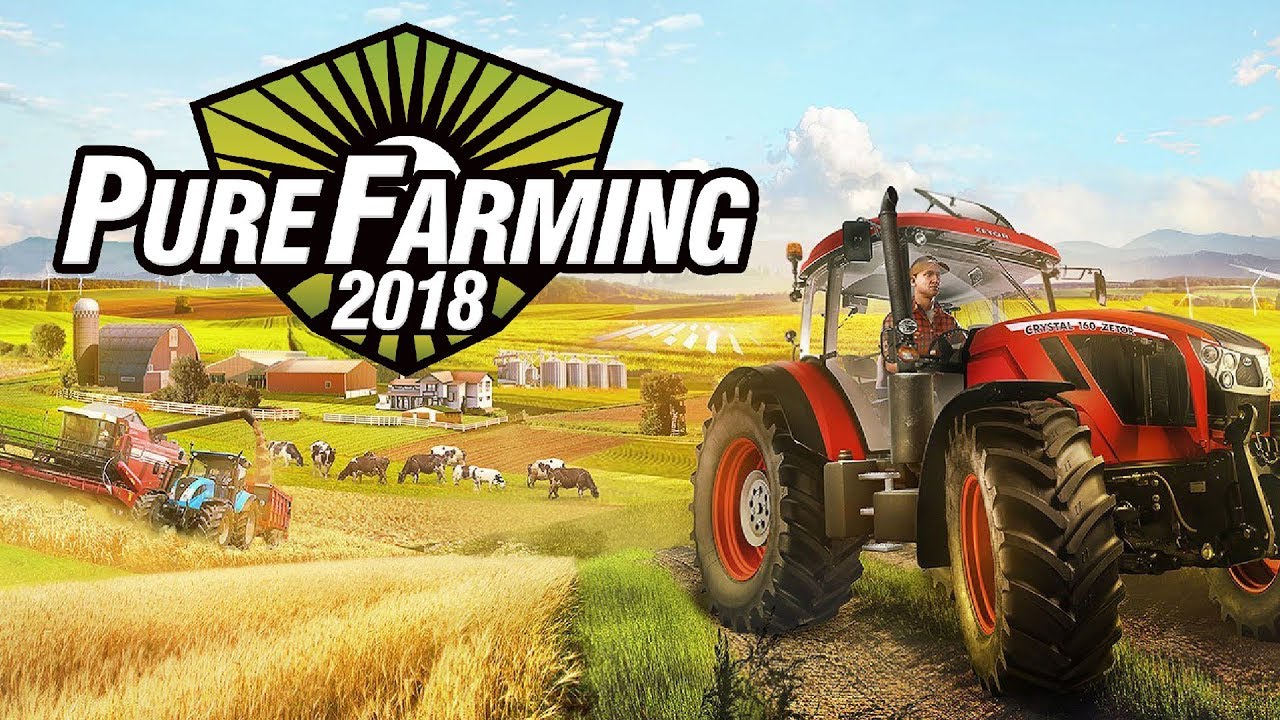 Pure Farming 2018 by new developer Ice Flames is their first gaming title release and is published by Techland (Torment: Tides of Numenera).  Available on PC, Xbox 1 and PS4, Pure Farming 2018 is unsurprisingly a farming simulator game that boasts playable farms set around the world and game modes that are suitable for newcomers as well as veterans of the genre.

With Giant’s Farming Simulator in my opinion being the leader in the farming sim field (sorry dad joke) and having played Soedesco’s Real Farm last year I was really hoping for something magical in terms of gameplay, graphics and sound.  What I found with Pure Farming 2018 was something refreshing and far from…Deja Moo.

“My First Farm”, “Free farming” and “Farming Challenges” are the three game modes that lay in wait for you at the menu screen and are dependent on your level of skill and amount of time you have to play as to which one you choose.

“My First Farm” is a great starter for gamers that are new to the farming sim world and require everything to be broken down into bite sized chunks in order to understand what to do.  The game mode features a background story that you have inherited a debt ridden farm in Montana from your late grandfather and it is down to you to turn it around in order to produce a profit and pay off the loan.

Every step of the way is guided by waypoints on a map and emails that serve to form a help guide which is located on your virtual tablet and can be called up at any time.  From the moment you walk out of the door it is instruction after instruction to ensure that you find the tractor in the shed, learn how to drive it, repair it in the workshop using the diagnostics machine before being told to get into the combine harvester for the first time and its off to the fields.  The way that it is guided is brilliant for newcomers however the constant emails that you receive at every single waypoint marker does get a little tedious at times due to the constant procedure of opening up the virtual tablet and reading the latest email to clear the notification.

As you gradually pickup the controls and the fundamental understanding of how to farm, your vehicles and machinery quickly multiply through purchasing new kit from the local shop allowing you to help other farmers with their jobs such as spreading manure onto an orchard or harvesting some wheat.  The time based side missions are a good way to earn extra money and buildup your empire.

The “Free Farming” mode allows you to choose where on the world you would like to build your farming empire choosing from a choice of Montana USA, Japan, Columbia, Italy and with the pre-ordered version “Germany”.  Each farm has its own visual style such as buildings and scenery that you would expect to find when in those parts of the world and also accompanying sound track.    Region specific crops such as hemp, rice and eggplants allow you to venture into the shop to buy farming machinery that you may have not ever used before in other farming simulator games.  Walking about as an American farmer in Japan did look a little odd though.  All of the machinery is available to be purchased right from the start and you are left to decide the best way to go about efficiently building a profit and expanding the business.

The “Farming Challenges” mode allows you to select from 20 realistic scenarios such as saving your farm from a fire, managing droughts and defending from locust attacks.  The challenges are designed to only take an hour of your time so they are perfect for a quick bit of farming action as well as taxing your brain to find the most efficient way to achieve the goal.

The game mechanics are not too bad, the authentic vehicles are responsive and they behave in the manner you would expect them such as slowing down when pulling loads and stopping when you hit obstacles.  The turning circles are not too ridiculous ensuring that you are not driving too far wide when running up and down the fields.  The usual vehicle accessories are present with the options to turn on and off lights, beacons and even windscreen wipers.  The camera can be either set outside the vehicle or inside for the full cockpit view which is great when negotiating tricky manoeuvres such as coupling up to the farming machinery or attempting to line up the trailer or tank below a silo or tower.

The depth of Pure Farming 2018 is pretty cool as it is down to you to oversee the entire farming process from even the smaller but still important aspects of farming such as refuelling the vehicles and repairing them in the garage.  You can turn your hand to livestock farming by raising cows, pigs, chickens and rabbits and even invest in green energy by purchasing wind turbines, solar panels and biogas stations.  Still not satisfied? Well there are large greenhouses to grow tomatoes, eggplants and wasabi as well as orchards to let you raise plums, chilli peppers, olives and cherries.  All of these items are alongside the usual cultivating and ploughing of crop fields.

The videos and static title screens look amazing and are bright and vibrant however the actual graphics during the gameplay are noticeably not to the same level of detail.  Don’t get me wrong, there has been much time spent in ensuring that all the machinery is well detailed and as accurate as possible however for me, playing on a Playstation Pro, I felt that there was a haze on my screen that made it lose some of its magic and the scenery such as buildings and trees looked a little basic at times and didn’t quite look right.  Sunrises and sunsets are smoothly animated giving a real feel to the day and night cycles, just remember to make good use of your vehicle lights!  I wasn’t the greatest fan of the way that the map boundary has been shown, to be honest it was a bit of an eyesore and heavily detracted from the picturesque setting that it is trying to achieve.  Below is a screenshot at night, it all looked a little spooky.  No zombie cows jumped out on me though!

The accompanying foot tapping country soundtrack to Pure Farming 2018 goes very well with the Montana farm setting and varies depending on the global location to help give it its authenticity.  The roar of the machinery is well replicated and reflective of how much strain you are putting onto the engine.  Ambient farmyard sounds of animals and birds help to immerse you while down on the farm.  I couldn’t find any fault here, everything you would expect to hear is there and it sounds great.

There is certainly a lot to accomplish in Pure Farming 2018 in order to successfully run a decent profit making farm, the question is how much spare time do you have to trundle up and down the fields ploughing, seeding and harvesting?  The 3 game modes are there to let you play how you want to play by adding challenges or removing restrictions and I would say that the “My First Farm” mode is probably the best laid out approach to enticing beginners to the farming simulator world that I have ever seen as it is so thorough but broken down simply.

There is sure to be new content added during the game’s lifespan to give you bigger challenges once you feel that you have cracked the farming routine.  To be honest if you do well in Pure Farming 2018 I would seriously consider that you re-evaluate your life and become a farmer for real. Pure Farming 2018 receives a Thumb Culture Gold award