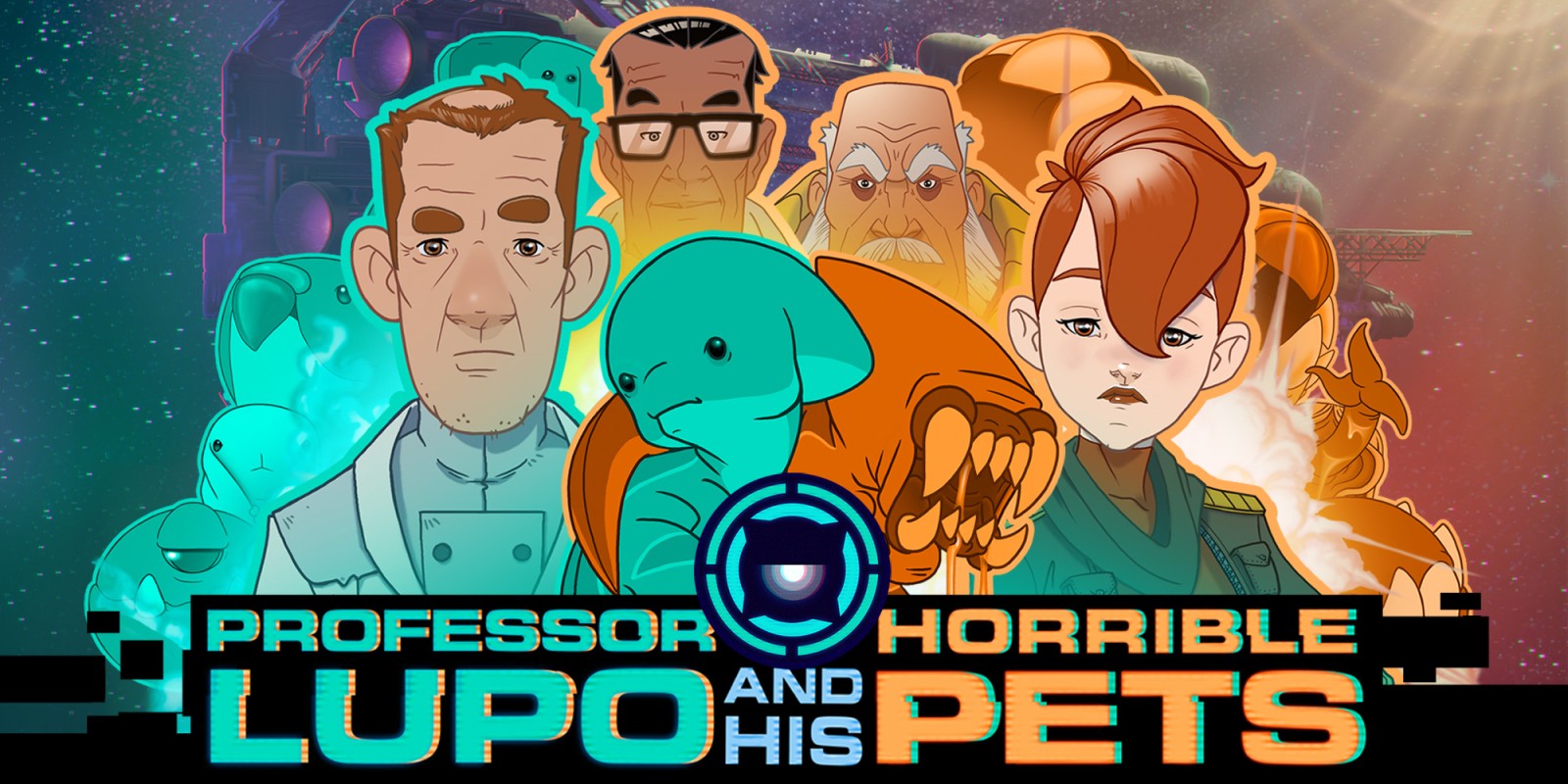 Hard to put down…

Professor Lupo and his Horrible Pets is the latest title from BeautiFun Games and is set to release on Switch and Steam on 11th July 2019.

PLahHP (ugh!) is a top-down puzzle game in which the titular professor has captured various insectoid alien species from the far reaches of the galaxy and stored them aboard the labyrinthine Aurora space station for safe-keeping. These “pets” all share both the ability to transform from cute monstrosities into slightly less cute monstrosities and a hankering for human flesh, and Professor Lupo makes a pretty penny from auctioning off them off to various despicable dictators who have conspired to turn Earth into an oppressive dystopia.

You play as The Intern, a lowly employee of Professor Lupo, whose job is to serve as bait to demonstrate the aliens’ unpleasant abilities to the would-be bidders, making that tedious 9 to 5 office job seem like a breeze in comparison. Unfortunately for PL (but not necessarily hHP) shortly after the game begins The Aurora is attacked by a mysterious organisation called Blue Ragnarok, who claim not to approve of the good professor’s business model from an ethical stand-point. The attack on The Aurora traps The Intern with the aliens, who soon discover that timid men in lab coats are a particularly good source of sustenance, and it becomes your task to escape The Aurora without becoming pet food. You are not alone, however, as you are joined on your travels by a BR operative called Flame and a deadpan AI called Plato. As a side-note, PLahHP is not to be confused with the similarly named Professor Layton games, so if you prefer your puzzles without a side of getting-your-virtual-face-ripped-off you might want to give this one a miss. 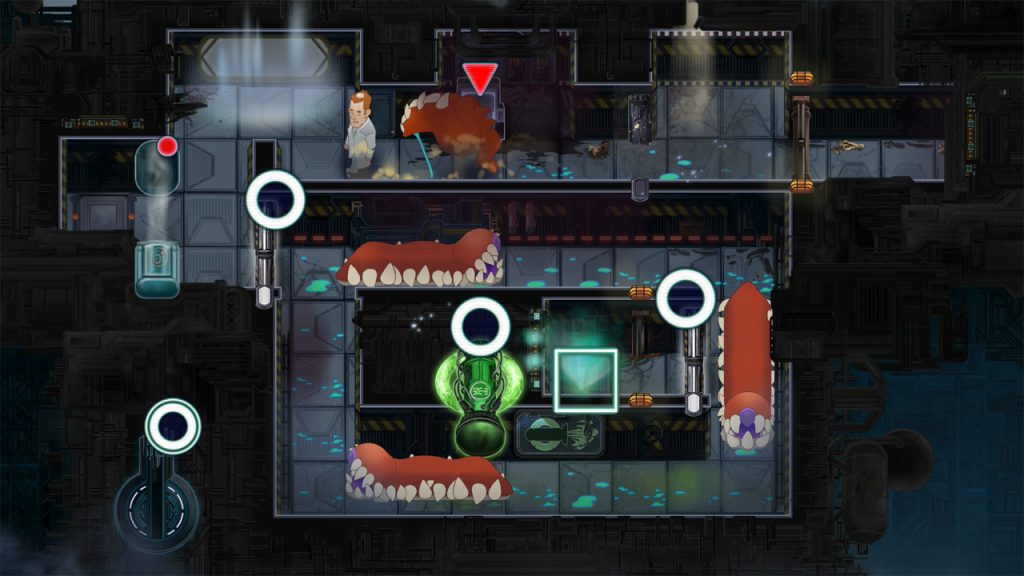 PLahHP revolves around escaping the alien inhabitants of The Aurora by navigating the maze-like layout and strategically operating doors and traps to confound and obliterate your pursuers. There are a variety of species aboard The Aurora and they can all out out-pace The Intern, so it is integral to learn their strengths, weaknesses and behavioural patterns and use them to your advantage. For example, the spheroid Sagitta is very fast but can only see you when it is stationary, meaning it will stop moving once it reaches where you were last time it was at a stand-still. This allows you to perform feints to lead it behind lockable doors or into traps. Another worm-like alien’s long, serpentine form means it can be tricked into travelling into restrictive corridors which it cannot easily escape, or be slowed down by being forced to take the long route to The Intern’s position. Some aliens like the taste of other aliens more than The Intern and this can also be used to your advantage. The various species are the high-point of PLahHP, and each time a new one showed up I enjoyed figuring its various quirks, many of which can be viewed within a glossary in the menu screen as you progress through the game. The game has that “Aha!” factor when you finally work out what you need to do, and the lethal nature of the “pets” add a juicy sense of peril. A good game design like this shouldn’t be taken for granted. 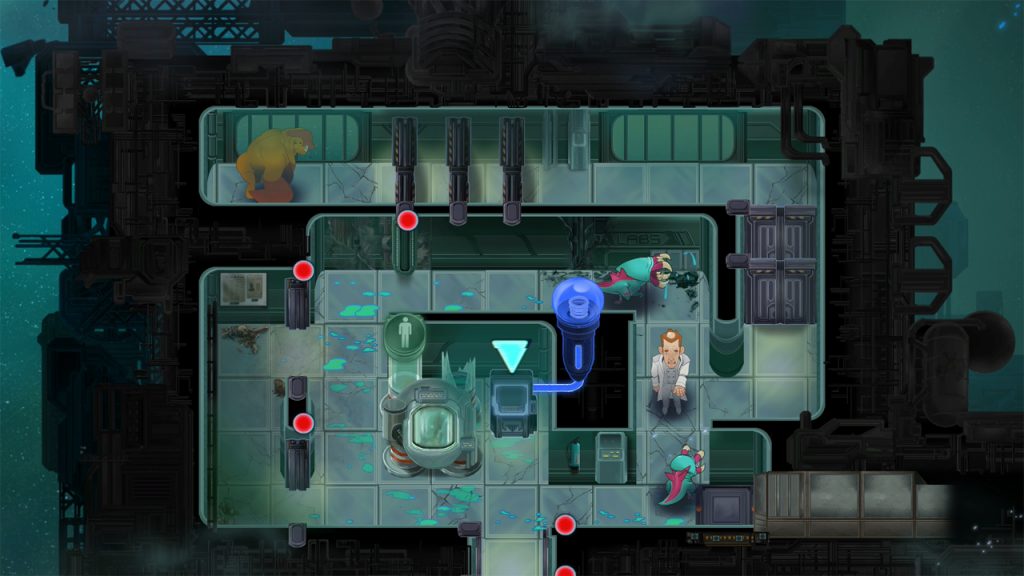 PLahHP feels a little like a mobile port at times, in that the controls sometimes don’t feel optimised for the Switch. In handheld mode touchscreen controls are available, but the Switch’s display is simultaneously small but a bit too big to hold with one hand so with an imprecise finger it’s all too easy to send the hapless intern (who isn’t that manoeuvrable, to begin with) past a console he needs to use to lock the door behind him or to miss a switch you are trying to operate. Given that escaping the terrors aboard The Aurora can be the seat of your pants stuff these issues can lead to frustrating deaths, which are thankfully mitigated by the frequent checkpoints and quick load times. Using the d-pad/buttons or the Joy Con as a pointer doesn’t resolve the issues completely as the remote switches are often easier to operate using touch. My approach was to play primarily using the d-pad and buttons, then, in moments where switches need to be remotely operated, holding the Switch with my left hand while tapping the switches with my right, which actually worked fairly well. These issues did not detract from the experience too much as a lot of the challenge comes from working out the sequence of actions you need to perform to escape each level alive, and there are no penalties for failure so once you figure out what to do you can keep trying until you get it right. 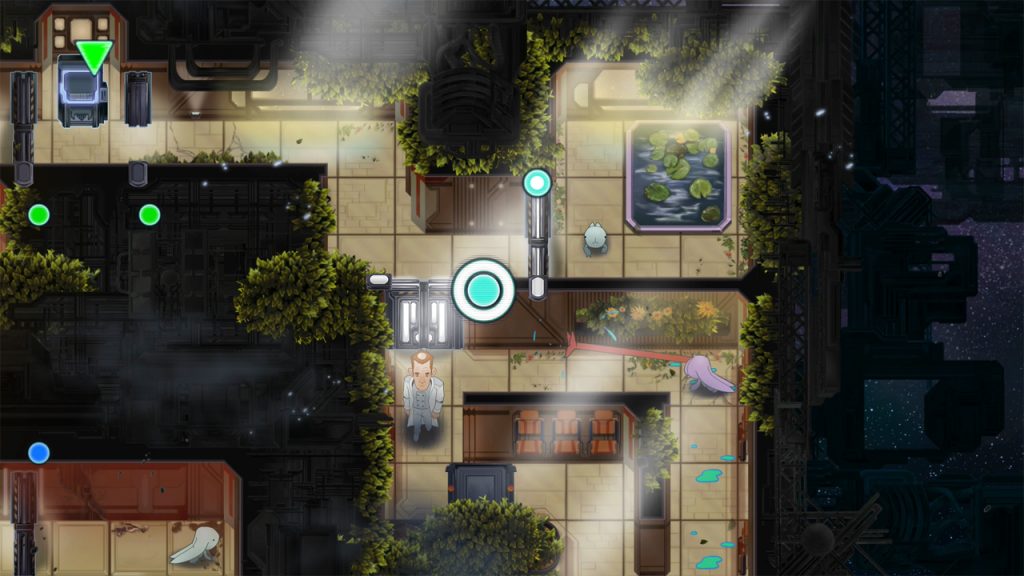 PLahHP is quite a dialogue and cutscene heavy for a level-based puzzle game. Unfortunately, the translation and voice-acting work is a sometimes a little below par and can come off as awkward, and at certain points I found myself considering skipping the dialogue to immediately progress to the next level. This is exacerbated early on by some levels serving solely as a means to progress the story. The narrative elements might frustrate people who prefer a pure puzzle-driven experience, but personally I became more engaged with the story as it progressed and became better-integrated into the gameplay, and in the end, I found myself applauding the attempt to weave a narrative through the proceedings.

There are many horrific bugs aboard Professor Lupo’s space station but the worst bug I encountered was in the later stages of the second chapter and was presumably not intended by the developers. Unwittingly I didn’t pick up on the preferred solution to a puzzle and found an alternative method instead. At a crucial point, this led to The Intern suddenly standing still in the middle of a corridor and waiting to be devoured by a pursuing critter and this happened every time I attempted the level. I eventually found the correct way to reach the goal but the level seemed generally quite glitched out, with your seemingly being required at one point to operate a flamethrower the controls for which were outside of what the camera was allowing you to see by default. Thumb Culture has reached out to BeautiFun to raise this bug but thankfully it can be circumvented. We will update this review if we are made aware that the issue has been patched. 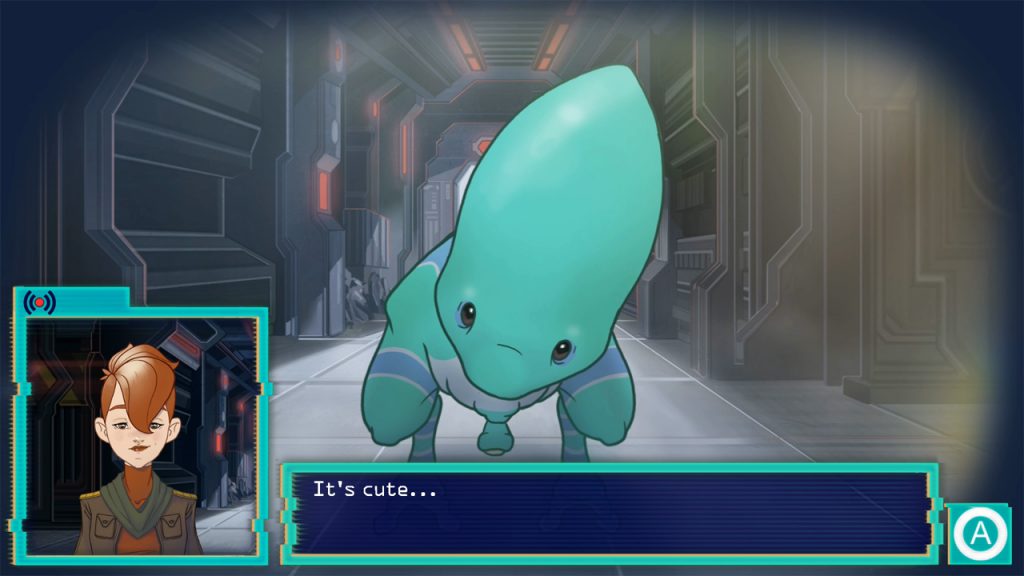 Graphically PLahHP looks decent, and I can’t be too critical of the simplistic visuals as too much “noise” can detract from games which revolve around puzzle-solving. The environments are uncomplicated in their aesthetics but there’s enough detail to sell the space station atmosphere without getting in the way of the puzzles. The character and alien designs are quite nuanced considering the simplistic art style but I would have liked to have seen more work put into the animation, particularly that of the aliens. A bit of a minor nit-pick, but there seems to have been an attempt to censor the game by colouring the gore green, and I think the tension would have been escalated with more realistic death animations (sorry, mum). Seeing your character dissolve into a puddle of green goo after being attacked by a creature with a surfeit of sharp teeth is a bit jarring. 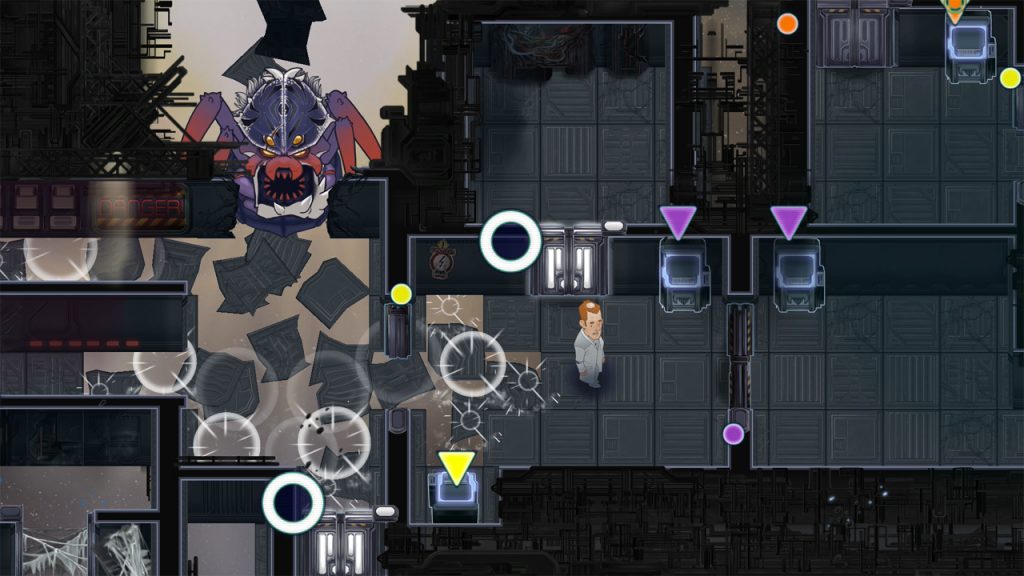 The appropriately synth-laden soundtrack complements the action without lodging in your head. A bit more variation would have been great, but the repetitive nature of the music makes me feel less bad about muting it when repeating sections over and over. As mentioned previously, the voice-acting is hit and miss but the sound effects do the job and everything comes together as a cohesive whole.

PLahHP is solely a single-player experience, though, as, with many puzzle games, you might be able to find some enjoyment by working out the solutions with a friend. The game is broken up into 100 levels and offers 12 hours of gameplay, which feels like more than enough content for a sub-£15 indie title (which is available at a discount during release week). There is an incentive to return to certain levels due to the presence of collectables. These are cleverly placed to encourage players to attempt a perfect run-through of a puzzle or intentionally put themselves in harm’s way by forcing them to take a detour through a hazardous area which could be otherwise avoided. I enjoyed attempting some of these challenges, although sometimes while trying to pick up a collectable I accidentally triggered a checkpoint which would prevent me from returning to the area where it was located. I actually appreciated that not every level had something to find as it allowed me to enjoy solving the puzzles without that niggling sense of having not found everything. 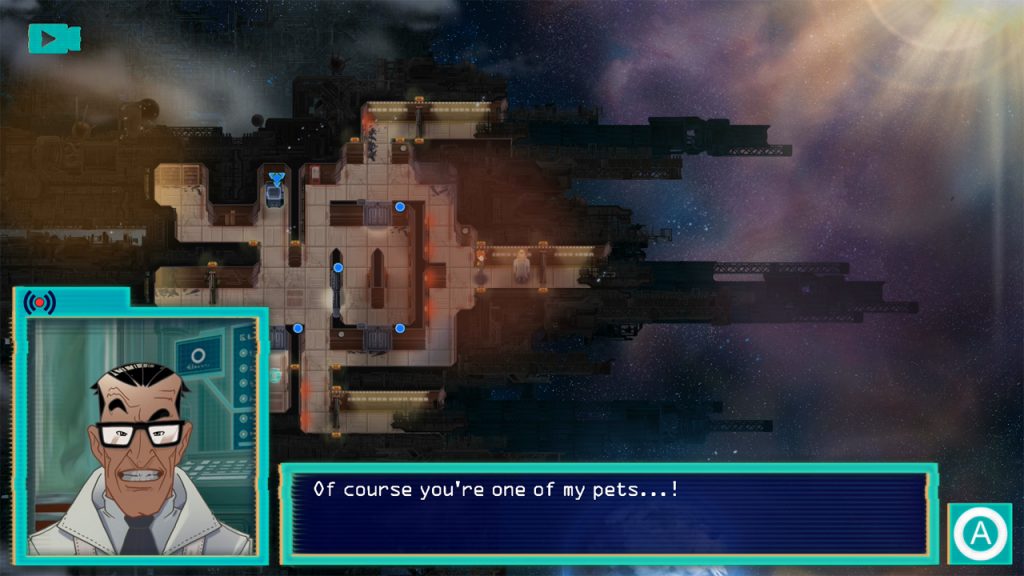 PLahHP is an enjoyable puzzle title with enough twists and turns in both the plot and gameplay to keep the player engaged for its relatively short run-time. What first seems like a simple concept is expanded with the introduction of characters with questionable motives and interesting new mechanics which change up the pace considerably. The game is not without its flaws but I found the combination of tricky puzzles and (very) light sci-fi horror quite satisfying. A quick glance over BeautiFun Games’ Twitter shows the enthusiasm and passion they have for this project, which is always heartening to see. In a sequel, I would like to see more of a focus on visuals and atmosphere, and with a bit more polish with regards to the script and voice-acting. I advise you to check out some gameplay footage as I suspect quick glance will tell you if this game is for you. Much like Professor Lupo’s pets, I found it quite hard to put down. I will be awarding it the Thumb Culture Silver award!