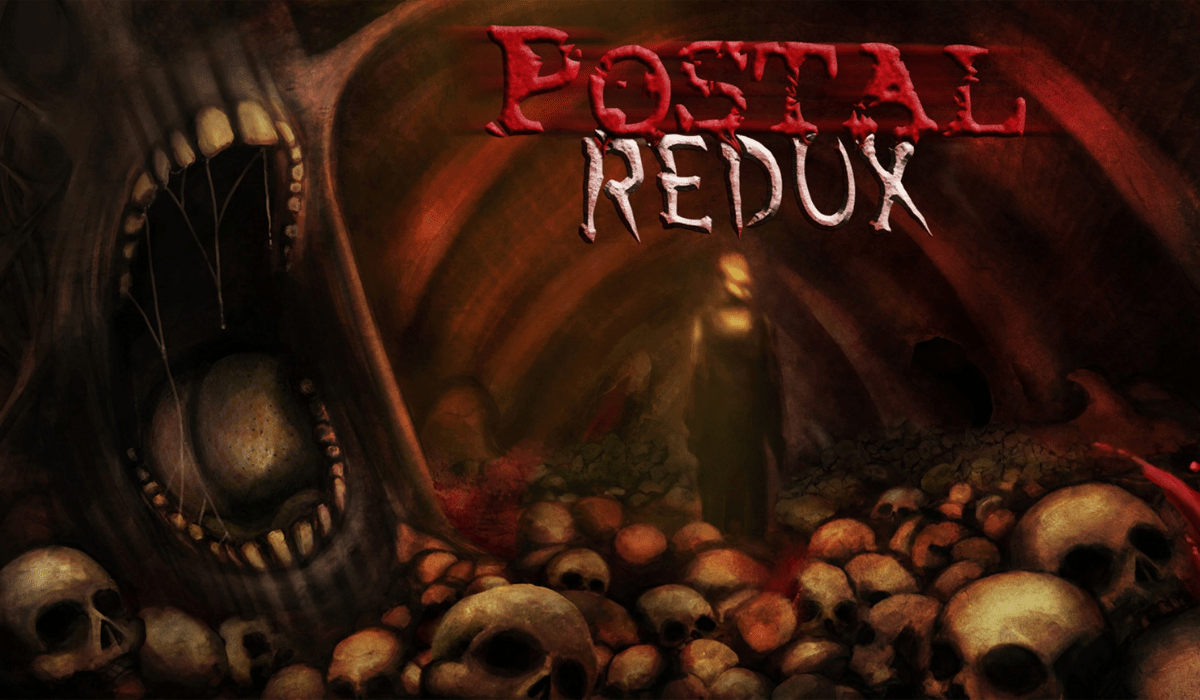 Postal REDUX is all the glorious murder from the original 1997 PC game Postal but remade in HD and with the Unreal Engine 4.  Once again it has been developed by Running With Scissors but this time around it has been published by MD Games.  It was originally released on PC in 2016, Switch in November of 2020, PlayStation 4 in March in the US, and April for the UK.  Postal REDUX was announced in 2014 but the PlayStation 4 version was cancelled in 2017 due to poor sales on the PC.

In Postal REDUX the air ripens with the odours of the dead and dying.  It smells like…Victory

Thankfully, MD Games announced a port of the game in September of 2020, and here we are.  We have the original game and all its expansion packs, so 23 stages in total.  Back in the day, Postal received moderate reviews and a modicum of controversy which is to be expected considering you are just mowing people down with an arsenal of weaponry.  But that is the draw to this game.  It reminds me of the Uwe Boll movie Rampage.  At its core, it’s just mindless and psychotic violence and I for one, love it.  It’s an excellent movie, I highly recommend it if you haven’t seen it.  Boll also directed the movie Postal based on the game, it wasn’t very good.  I mean, if ramming your pistol up a cat’s arse and using it as a silencer is your thing, then go for it!

Did you play the original game when it first came out?  Lets us know in the comments. Now, let’s “GO POSTAL!”

Postal REDUX is a good old-fashioned top-down, isometric twin-stick shooter.  The difference between this and other shooters is it’s not aliens or monsters you kill, it’s humans!  The story is very simple and dark.  You play as ‘The Postal Dude’ and you have been evicted from your home.  As a result, you ‘go postal’.  You’ve lost your mind and decide to take out all your rage on the people in the town.  As a result, you have a blatant disregard for human life and will murder anyone; cops, the army, and innocent people are all fair game.

There are two modes to play, Campaign and Rampage.  In campaign mode, you have to murder a certain percentage of hostiles to progress to the next level.  You only need to kill the hostiles who will attack you on site.  You don’t NEED to kill the innocent bystanders, but where’s the fun in that?  At the start, you are equipped with a machine gun with infinite ammo and can pick up more weapons and ammo out in the field such as a shotgun, flame thrower, rocket launcher, and others.  You will find health scattered around sparsely as well as dynamite, molotovs, and grenades which are perfect to conduct your symphony of slaughter.

Rampage mode is the same gameplay, but it’s more of an arcade mode. Here it is all dependant on your score rather than an objective.

The one thing that this game would benefit from would be any kind of multiplayer.  The PC version had it so I don’t really know why it would be omitted from the console version.  In the PC version, up to four players could play co-op or there was a competitive deathmatch mode.  It would have been great to include this on the PlayStation 4 version because homicide with friends sounds like such fun.

Graphically, Postal REDUX is a step up from the original, but it isn’t a significant one.  That being said, I don’t think it needs to be.  It retains that feeling of nostalgia as you remember playing this chaotic little number back in 1997.  There are other graphical modes that are essentially special effects so you can play in its original pixel format if you wanted and many others.  Some like the one below can even be helpful.  With the game being only a 1.19GB download, I was pleased to see that the loading screens were extremely fast and it doesn’t remove you from the violence for too long.

During your cacophony of killing, you can’t help but laugh at how funny it is.  One might find it quite perturbing and unsettling listening to the cries and pathetic whimpering as the light fades in the eyes of the innocents…but I am not that person.  Add into that the one-liners that the Postal Dude throws out, it’s glaringly obvious that this game does not take itself seriously.

The campaign itself won’t take too long at all, leaving you with the Rampage mode.  The game is strangely compelling and addictive and for those interested in bettering their high scores, you spend a lot of time in Rampage mode.  For the trophy completionists out there, it offers quite a challenging list to complete.  Sadly with the omission of any multiplayer, this is all we have.  If there was multiplayer I would definitely be spending a lot more time on this game.

Postal REDUX is a simple but fun little game that doesn’t take itself seriously at all.  It is addictive mindless violence.  If this was a brand new game and not a remake, I’m not sure it would have been made in this day and age.  In 1997 it certainly had its shock value going for it, but with mass shootings occurring more frequently in the subsequent years and games like Grand Theft Auto taking centre stage, as gamers, we are now accustomed to this violence.  A game like this will undoubtedly ruffle a few feathers in our current society, but I personally think it is great.  I just wish it had multiplayer, it’s the only thing stopping me from giving it a platinum award.

So for this reason, I award Postal REDUX a murderous Thumb Culture Gold Award. 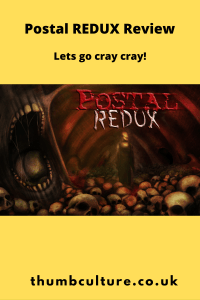