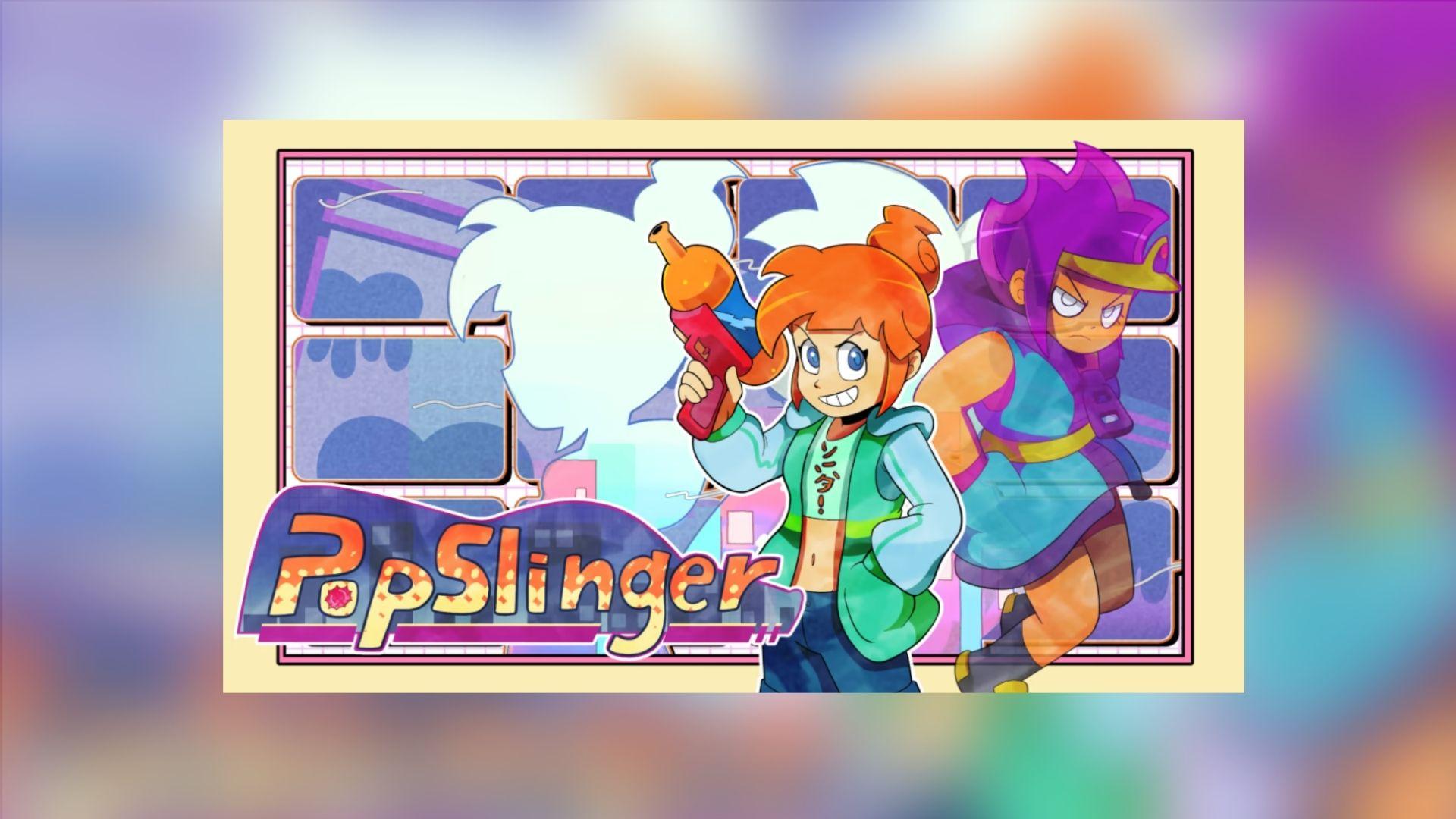 For any lover of 90’s, SNES, and arcade side scrolling beat em ups, boy do we have a game for you.

PopSlinger is a side-scrolling 2D action game developed and published by Funky Can Creative and was released on January 26th for the Nintendo Switch.

I usually play games with a rich story but I sure do love me some side scrolling goodness. Mario is a classic but I have a fondness for the arcade style side scrolling. Going to any movie theater or pizza place, I was bound to be playing one of those arcade machines. So something like this is a great game for me to play and review.

If you’re excited to play PopSlinger or enjoy the game and want to share your thoughts, leave a comment down below or give this a thumbs up. We always love hearing back.

PopSlinger is the story of a girl named Ria Carbon who becomes a popslinger, a long line of fighters, to fight against a force from another dimension called the Corazones. She is accompanied by a former popslinger named Gin. The player accompanies them along on their journey and through that, we endure cringey dialogue, pop music, and enough colors to fill Willy Wonka’s garden.

Besides the fact that the game feels like it was made and written by a 12 year old girl, this game can be real fun. It’s very clearly a homage to old arcade games. Turtles in Time and The Simpsons arcade game are the ones that come to mind. While those two are much better, PopSlinger definitely hits the nail with referencing the style and gameplay. This came from a place of love and nostalgia and I commend them for that.

As I mentioned above, the dialogue can get cringy. But I can’t really heavily criticize the game for that because the protagonist is a young girl and that’s how she’d talk but for me, a 21 year old man, It’s not really something I can praise either. The plot on the other hand is something I can criticize. For a side scrolling arcade style game, I will give credit to the developers for adding a story but it’s pretty forgettable. It doesn’t really draw you in and all it does is just make you want to skip the cut scenes so you can get to the gameplay. And the Gin character is pretty forgettable. She does help you out with fighting enemies and bosses but there’s just something off about her. It just doesn’t work. But for a side character, she’s not annoying like Fi from Skyward Sword. PopSlinger also features an open world level system. Similar to Super Mario World, it’s an overlay view where you control the main character from one area to another.

But to give credit where credit is due, PopSlinger is surprisingly fun and can get a little challenging. There are games that are too easy they’re boring but PopSlinger finds that balance. It’s not really difficult but it will take you a few tries to beat a boss.

PopSlinger’s love letter to arcade games continues with it’s graphics and audio. PopSlinger’s look is done in the style of something you’d see out of the 90’s. Has that look of an old VHS tape that I’ve seen a lot of games do. It’s not original but I can see what they’re going for. And the audio falls into that place as well. It has all the arcade sound effects and funky music you’d expect. The game does have a unique look to it, If someone showed me gameplay footage without telling me what the game was called, I’d definitely remember it so PopSlinger does stand out. I really wish I could praise all this stuff more but it’s nothing groundbreaking or new.

The bosses look very good and have an original design, but the enemies you fight in each level are pretty generic. In the first level, they’re basically just blobs or slugs that spit goo at you. Maybe it’s supposed to fit in with the arcade style games the developers are referencing but come on, give us something new.

PopSlinger is a proper length but I wouldn’t be surprised if people found it kind of redundant after awhile. I didn’t find it that way at all but for a more advanced gamer, it can become that way. Also, this isn’t the type of game to have any DLC or any extra features. I honestly respect the developers for not doing that because I feel like it would slow the game down more.

But I do think that the game needs more improvements and a better story. I’m not expecting a masterpiece of storytelling but I would at least like something that’s memorable. Like every time a new cut scene happened, I had forgotten what happened in the previous one. Besides that,  PopSlinger is a good game, but not a great one.

With that, I am giving PopSlinger the Thumb Culture Silver Award.