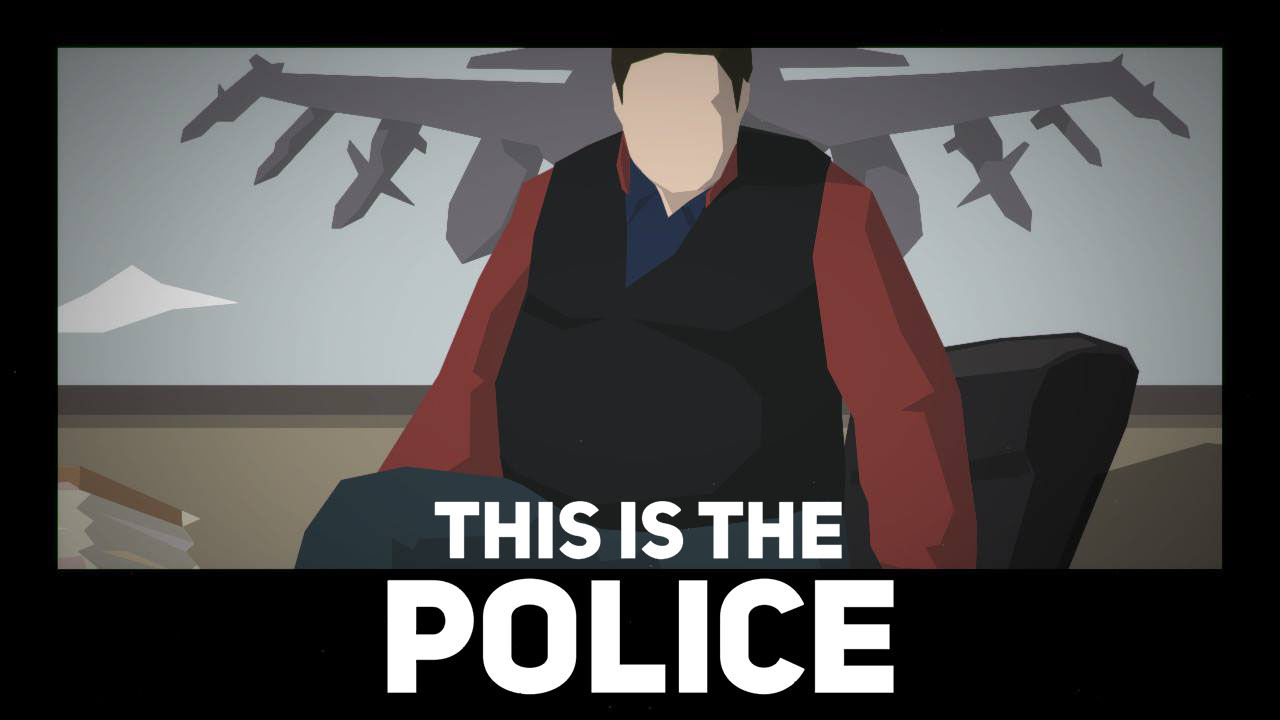 This is the Police is an Adventure/Strategy game from THQ Nordic. Freeburg is the city backdrop of the game, a city on the brink of chaos. You take on the role of Jack Boyd the City Police Chief who is on the verge of retirement. Being pulled between the Mayor, The Mob and his own personal issues (not to mention the city crime – you know the job he is actually paid to do). Will he reach his goal of retirement and a nice pension?

This is the Police has a gritty anime comic book style to the game overall which is mirrored by the personality of Jack Boyd. The game starts with a press conference where you are answering questions on your retirement and the city plans that will come to fruition afterwards. A comic strip explanation of Jack (Narrated by himself of course) explaining who he is and what is happening in Freeburg follows. It isn’t until quite some time after that we actually get into the meat and potatoes of the game. Luckily, I quite enjoy a film Noir style and dry sarcasm so I didn’t mind the wait. 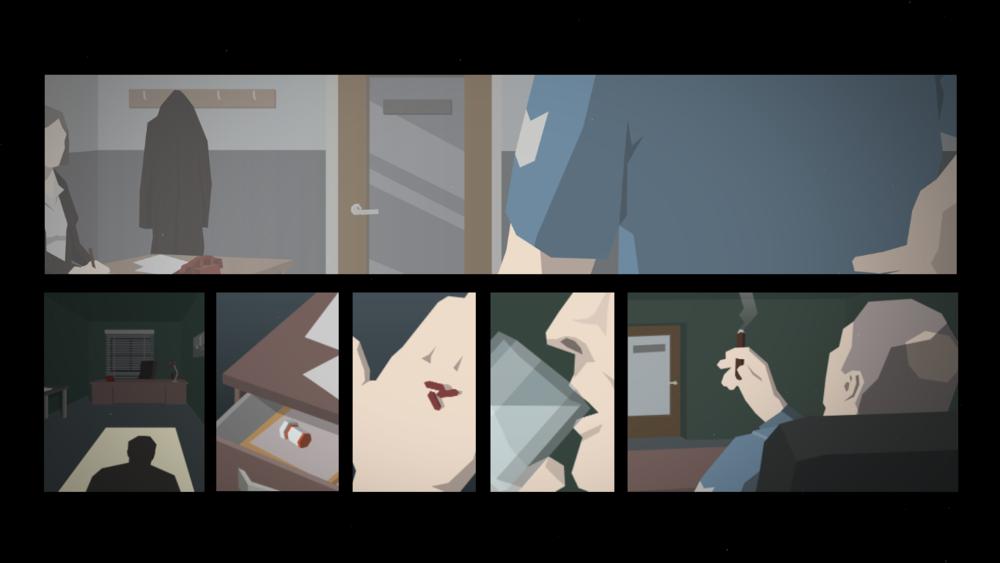 As the game progresses there are more of these ‘cut scenes’ which give an insight to Jack’s story. The problem is that they have little to no impact on the actual gameplay and strategy, other than to let you know you need to pay attention to a certain character that may ask for a favour that day.

Heading into the actual gameplay and strategy element itself, you take control over the police department, and help it deal with the crimes and issues that arise through each day. The city is laid out in the format of a map with the available ‘Cops’ along the bottom, as crimes happen a timed window will pop up to respond to. Sometimes you will find more difficult crimes which you need to call in the ‘backup’ for which is where the S.W.A.T or Paddy Wagon units come into play. 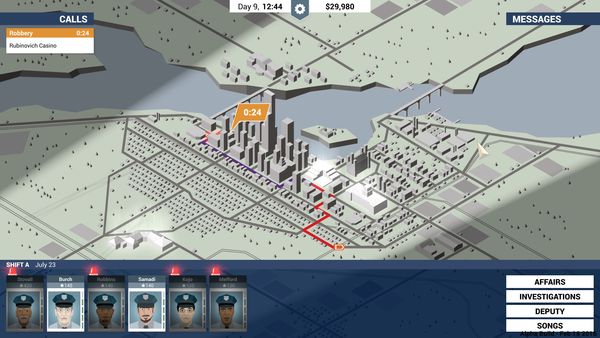 On top of this there is the option of City Hall which is where you can make requests of the mayor to improve your force by adding additional units or improving other areas (such as S.W.A.T).

I think it was Einstein who said ‘The Definition of Madness is doing the same thing over and over and expecting different results’. This is definitely how I felt after spending considerable time on this game. Unfortunately, even as the story progresses the actual gameplay doesn’t. Every day is exactly the same. If this is a true Sim of the police Department no wonder they eat so many Doughnuts!

THQ Nordic have tried to add a bit of variety in the types of crimes and by adding ‘false alarms’ into the mix but by day 15 I really didn’t care if it was a murder or a kid with a toy gun. As long as I sent the recommended number of units it really didn’t matter. 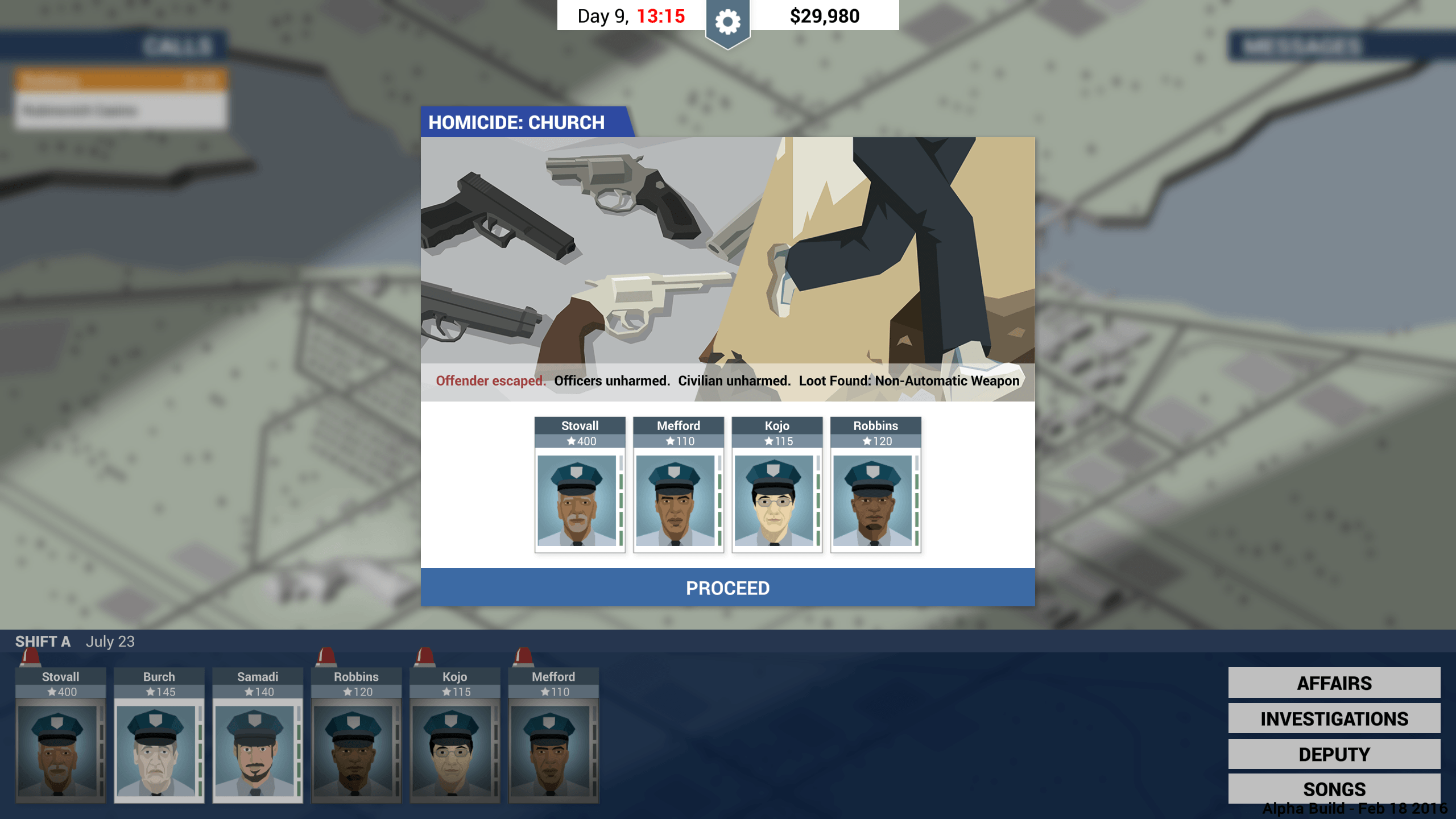 The only bit of salvation in my daily grind were the detective cases. (Thank god as I was starting to understand why Jack was so sarcastic and pessimistic at this point). These work in a similar way to the normal crimes, however you assign a detective instead of cops. They then work in the background and report to you with images and a report of what has happened. You then have to piece the images together (in the correct order) to work out who the suspect is and arrest them. 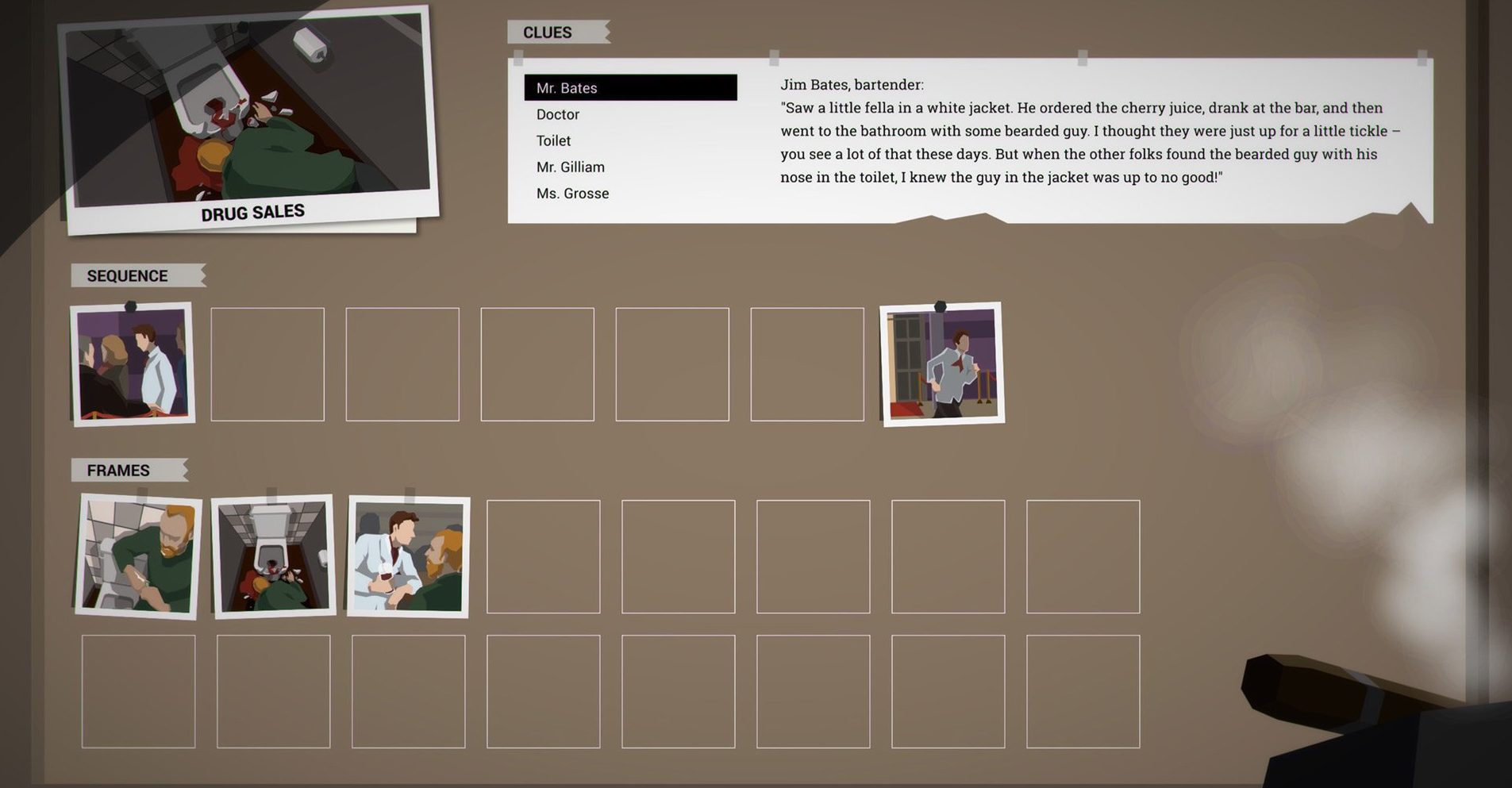 Something that became apparent was that the further into the game you progressed the more the game seemed to struggle, I was starting to experience what felt like Lag (odd for an offline game), as well as the game would freeze in places while it was trying to load up the days map. To put it briefly… The gameplay left a lot to be desired.

As I mentioned earlier this game has a very distinct anime styling to is which I actually really like, it adds a nice character to the cut scenes and fits the story very well.

Because of its simplistic styling I didn’t notice any frame issues or ‘glitches in the matrix’ so to speak. I only wish there had been more of the adventure side and less time spent staring at the same map layout counting down the time.

This is the Police has an audio that I would describe as Marmite. If you’re a fan of Classical Jazz and Piano style music then I think you will enjoy it. The game allows you to select a soundtrack each day. You can purchase more tracks using the in game ‘catalogue’. 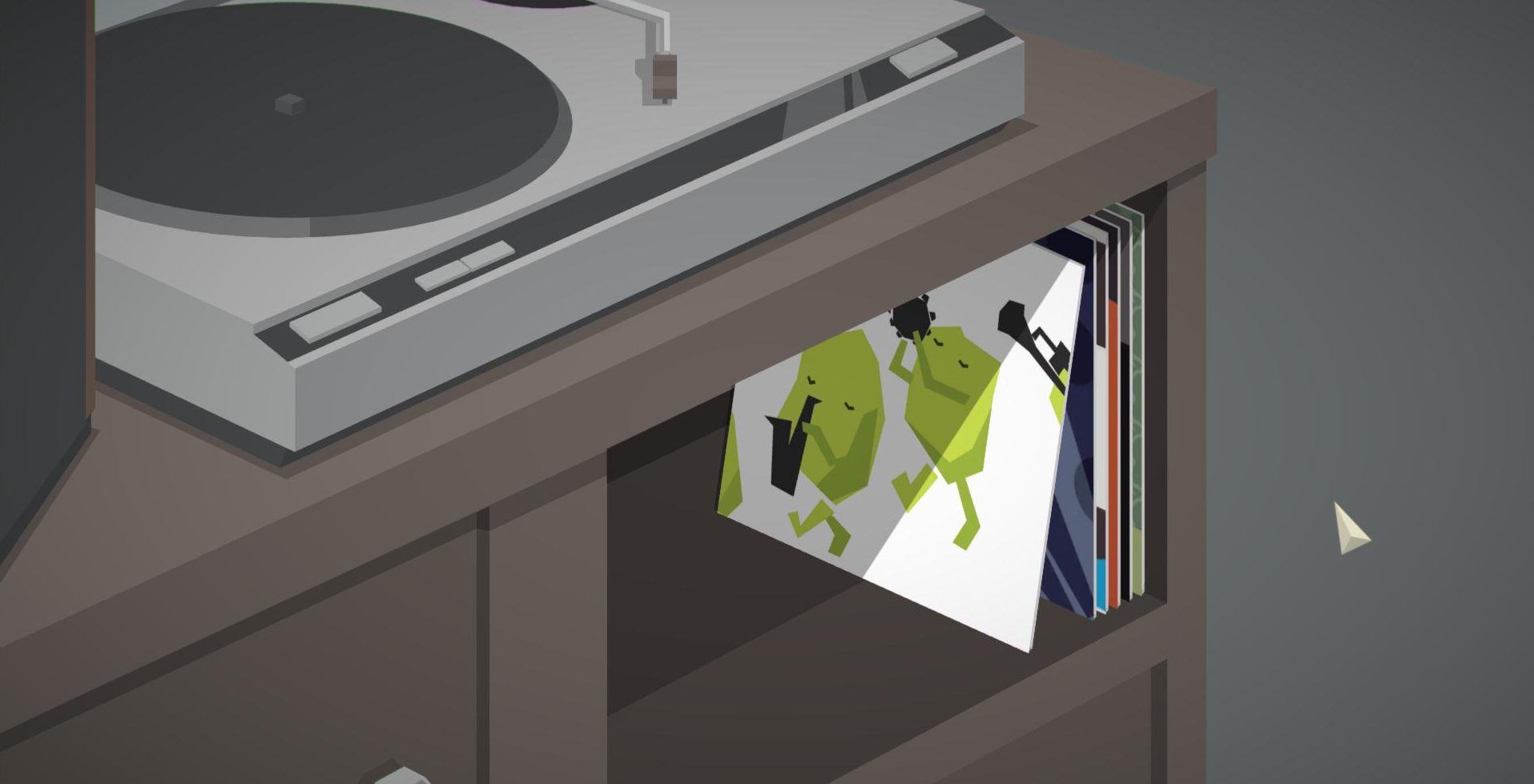 The voice acting is so rigid it’s almost like someone was bashing me in the head with a bat. The only character who seemed to show any kind of emotion was Jack. But even then, that may have been only because I quite enjoyed his outlook on things.

How much punishment are you willing to take? Jack has 180 days to go until Retirement. If you can last 180 days repeating the same task over and over then all credit to you. (Ok, yes, I know we have jobs like this, but at least we get paid for that. We don’t pay for the privilege of doing it). I think the words pulling teeth feel quite appropriate here.

This is the Police actually has a rather nice idea here of what it wants to do. It just doesn’t do it often enough for me. The actual story elements make for quite an interesting tale. If only the gameplay had any kind of interaction with it to make it feel connected.

I’m sure RTS / Sim fans will argue that the repetition is a critical part of any sim type game. I agree, but I would also argue that any game should be fun to play. This really wasn’t due to the disconnect between gameplay and story. If I didn’t have an affinity for dry sarcasm and the Noir styling I wouldn’t even have looked at this title outside of doing this review.

I feel this game deserves a Thumb Culture Bronze Award . Perhaps Police Sim fans will find a small nugget of something to enjoy. But, I will be locking this one up for a very long time!