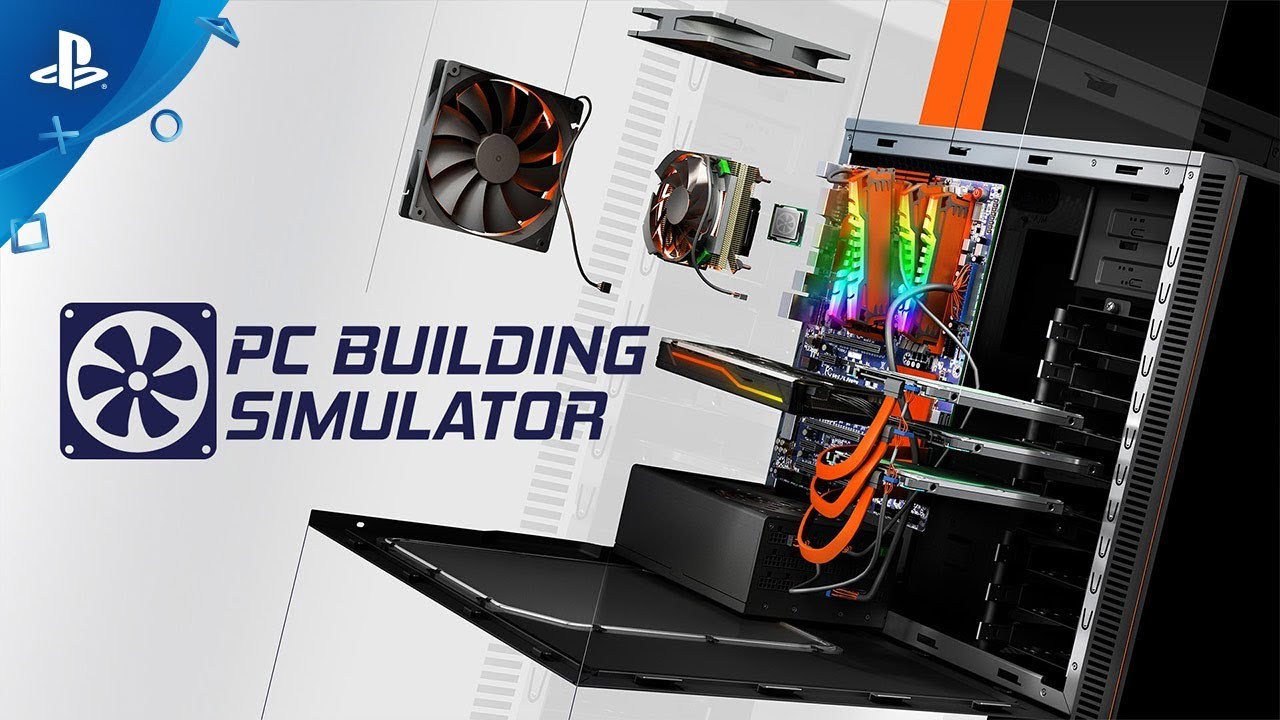 PC Building Simulator is the latest release from Claudiu Kiss & The Irregular Corporation and is the newest of the ‘Sim’ style games to make its way to the PS4 after Car Mechanic Simulator came out in June. At first glance, I was a little confused why a PC Building Sim would come to PS4, as it just feels like something PC gamers would be the market aim for such a title.

I briefly had a try of the PC release that came out last year and had a bit of fun so I’m hoping the PS4 version doesn’t reduce the spec on me (or if so, then not by too much).

As the title suggests, the main aim here is to build and repair PCs. You have taken over a PC repair shop from your Uncle who has moved on to bigger and better things (or at least ‘things’ somewhere else).

Customers will email through requesting that you do various tasks for them which at first will be little things like remove viruses or clean out dust from the PC, nothing too drastic! But then scales up the difficulty gradually until you’re building new PC’s based on the Customers requirements which can be anything from certain manufacturers parts used to reaching a certain benchmark score.

The actual PC work itself feels very much like you’re playing it using a PC. For the most part, it’s simply left analogue stick to move the cursor and the X button to install/remove/ screw / unscrew etc.

The D-Pad switches between the options of Install / Remove / Cables and the Triangle Button turns the power on and off the machine, so nothing overly complex to remember (PC building not complex? Who would’ve known?). 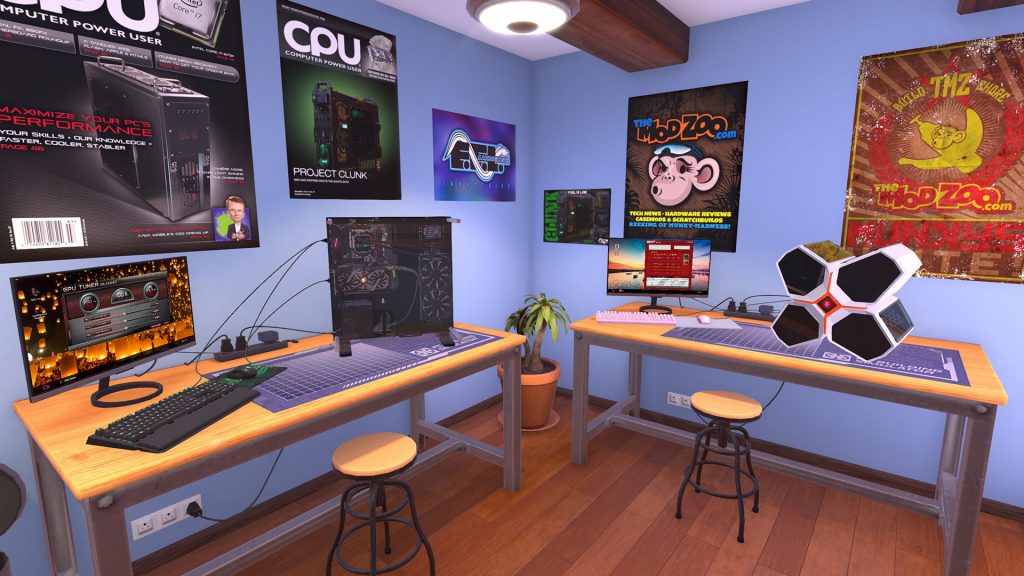 There are a few little ‘Career’ type functions to help give you some targets rather than just mindlessly repairing and building PCs. These come in the form of Bongle which is a review site, the higher the score the more money and more variety in the jobs you will be asked to carry out.

Also, once you get up to a high enough rating you can also buy shares in the business (which considering you’re the only one running it I think it’s only fair).

Within the PC menu’s there are stores where you can buy upgrades to make life a little easier, such as the cables automatically connecting, the speed of the screws etc. All nice additions that help ease the ‘grind’ of repeating the same over and over.

Unfortunately, that is one of the biggest problems in PC Building Simulator, the ‘Grind’. Don’t misunderstand me, I know that ‘It’s a PC Building Sim’ and yes, It’s to be expected as there are only so many parts that you can replace or build but other than unlocking better parts and extra workstations there is very little in-game to keep you wanting to progress.

I’d like to say that it looks fantastic, but in reality, it could use a GPU upgrade, there are times where parts glitch into each other and the Benchmark test doesn’t run smoothly no matter what parts you have inside the PC (it’s always stuttering and slow). 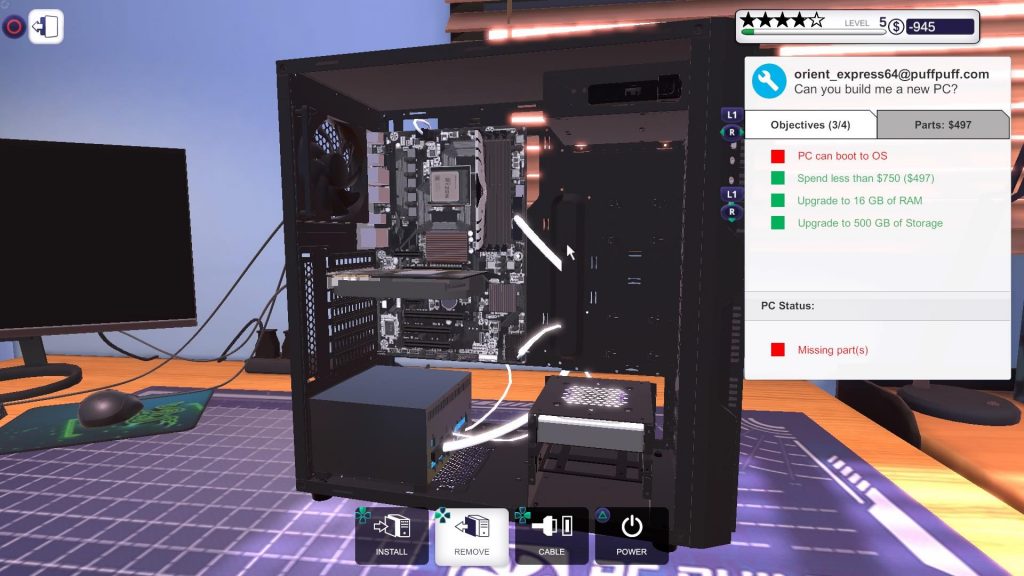 The audio is rather generic, with a built-in soundtrack that you can control via your office PC, that plus the PC fan effects and boot up noises left me with a bit of a headache due to the repetition and lack of variety… (Shame they don’t come with removable sound cards anymore!)

I do want to round this off by saying that while I’ve been negative on the audio and visuals, none of the issues is game-breaking and once I hit mute on the sound effects, I carried on playing for a few more hours.

PC Building Simulator has plenty of jobs and tasks to keep you busy for a very long time if you’re a glutton for punishment or a huge PC fan (in which case why are you not playing this on a PC?).

I don’t see casual gamers playing this for a very long time if I’m honest, although I do see some potential here for PC builders to use this as a cheap’ ish method of comparing parts in a build to see how they work together (assuming the information from the benchmark tests is accurate to the real-life components).

For anyone looking to grind through the pain of PC Building in search of the Platinum Trophy, there are a fair number of trophies to pick up, however, you will need to fix and build a lot of PC’s to get there. Probably not the most difficult Platinum in your collection though. 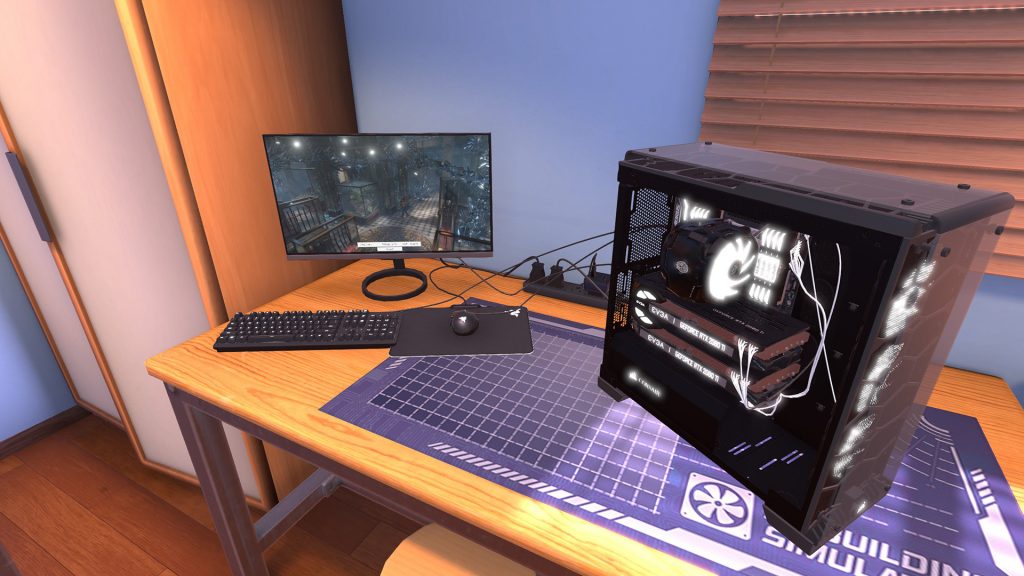 PC Building Simulator is fun to experiment with on a short-term basis, I think if it was possible to add in some more variants like Laptops, Tablets, Phones etc. then it may be more appealing to general gamers however I appreciate with all the components its most likely not a feasible option.

Unfortunately, the repetitiveness of the tasks means that it’s a game that will sit on the shelf for rather long spells in between use and after completion will most likely not be played again.

PC Building Simulator has reached the Benchmark of the Thumb Culture Bronze Award, usable and fun but could and maybe should be better.