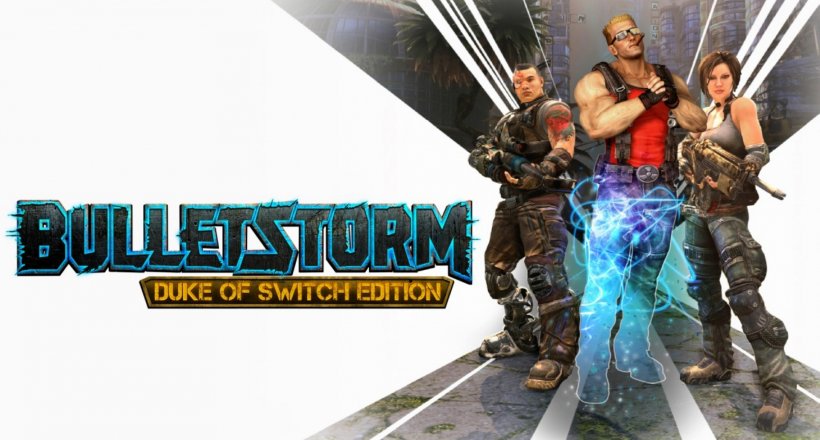 Bulletstorm was developed by People Can Fly and Epic Games, and originally released on Xbox 360, Playstation 3 and Windows way back in 2011. A souped-up port was released to the same platforms in 2017 and the Switch is next in line, with Duke Nukem’s appearance being given even more prominence this time around.

Start the game without investigating any of the options on the menu screen and you will find yourself playing as Grayson Hunt, the leader of an ex-communicated special ops team who previously served as state-sponsored assassins for the unhinged General Sarrano. We are told via flashback that the bad lads the team had been targeting weren’t such bad lads after all, but rather innocents who stood in the way of the General’s totalitarian regime. This led to the Grayson’s team going rogue and, in the present day, carrying out an attack Sarrano’s warship, leading to both parties being stranded on a resort planet which is overrun by mutated freaks and man-eating plants. Your goal is to escape the planet alive and hopefully take out the psychotic general in the process. You are accompanied by Ishi, a crew member who after the crash was hastily given a life-saving android upgrade which has altered his personality for the worst. But why play as Grayson when you can check that tempting box on the main menu and play through the campaign as the bubblegum-chewing bozo himself, Duke Nukem? Well, there are quite a few reasons actually but I’ll get to them later.

For the uninitiated, Bulletstorm is an FPS with a twist. In addition to the typical plethora of sadistic weaponry found in FPS titles, shortly after crash-landing Grayson (or the Duke) soon comes across an energy leash, a whip which enables him to manipulate the environment and pull enemies into the air, whereupon he can do terrible things to them as they tumble to the ground in slow-motion. However, the real shake-up to the FPS formula is that the currency for ammunition and upgrades is linked to your score, which is driven up by killing enemies in innovative ways, a mechanic which is surprisingly neatly explained in the plot. Some of these methods of execution are tied to using specific weaponry while others might involving forcing an enemy to interact with the terrain in a way they may not like.

Upgrades and ammunition can be purchased from drop-kits, which are situated in the no-man’s land between patches of hostile territory. These drop-kits also offer the opportunity to review which skills you have unlocked and decide upon your weapon load-out. These  functions are actually more closely linked than they initially appear, because in addition to your default rifle you are can carry two weapons at once, and it usually makes sense to favour those for which you have not unlocked all the skills, thereby enabling you to pick up new skill bonuses more regularly. This encourages you to mix up your approach and not favour the same weapons throughout your playthrough. You unlock more outlandish guns become available as you progress, with a personal favourite being the Headhunter, a sniper rifle which allows the player to shoot enemies in the arse with remote-controlled bullets, Metal Gear Solid-style. All of the weapons feature a “Charge” mode, which tend to make you feel totally over-powered, especially when you are able to vaporise a mini-boss within seconds. Unfortunately ammunition for these secondary abilities is expensive, which discourages you from using it except when you really need it.

Bulletstorm is a lot of fun. The world design is top notch and the many different ways to kill enemies keeps things fresh for most of the playthrough. I did start to become frustrated once I was trying to unlock the last couple of skills for each weapon, given that these tended to involve burning through expensive, consumable ammunition and I was no longer obtaining currency bonuses from unlocking new skills at this point.
The “Normal” difficulty is unlikely to present experienced FPS fans with too much of a challenge. Even from the off your arsenal is far superior to that of the enemy hordes, and some late-game weapons tip the balance even further in your favour. Enemies can be whipped out from behind their cover, and furthermore the game operates an auto-replenishing health system so you can be quite gung-ho before retreating back into the shadows to recover your breath. The challenge is instead derived from finding out how to unlock each skill.

Bulletstorm: Duke of Switch Edition is a technically fantastic conversion. Visuals are in the same vein as Cliff Bleszinski’s previous series, Gears of War, with classical and art deco architecture being juxtaposed with massive, roided-up dudes and horrific, mutated lifeforms. The game looks fantastic in both handheld and docked mode, and the frame-rate rarely dips below 30fps in spite of all the chaos on screen. I would say that for me it surpasses even the impressive Switch ports of Wolfenstein 2: The New Collossus and Doom in terms of visual clarity. Explosions sometimes look a bit like a fire-cracker going off in a shoe-box but that being said the visual make-over is quite apparent and this port stands as one of the graphical highpoint for the (let’s face it, slightly under-powered) hybrid.

Audio quality is excellent, and I didn’t notice any of the ugly compression or popping which can be found in weaker Switch ports such as Assassin’s Creed 3 and Saints Row 3, either in docked or handheld mode. The music is alternatively beautiful and cinematic in quieter moments and snarling and ugly as fire-fights escalate. Voice-acting is fairly strong throughout, although Duke Nukem’s lines have been simply plopped over the top of Grayson’s. This means other characters do not acknowledge the protagonist as the Duke and even refer to him as “Gray”. This is played as a bit of a gag, but Duke Nukem isn’t a three dimensional character, and the new dialogue feels out of place given that the other characters’ dialogue is unaltered.  Even worse, playing as the emotionally stunted, wise-cracking Duke means the redemptive arc which is meant to drive the main campaign falls totally flat. I recommend you play Bulletstorm: Duke of Switch Edition as originally intended to begin with then check out the Duke Nukem campaign if you’re after a palette cleanser. Even then don’t expect anything radically different as some of the lines are exactly the same for both characters.

The most glaring issue with the Switch port of Bulletstorm is the apparent omission of the challenge maps and multiplayer content present in the original. This means that once you are done with the 8 to 10 hour main campaign the only replayability comes from starting again on harder modes or taking on Overkill mode, where you are given permanent access to all your weaponry and the option to turn on infinite ammo for weapons for which you have unlocked all the skills. This is quite disappointing since much of the coverage online states that Duke of Switch carries over all of the DLC from previous versions, some of which was in the form of additional challenge maps. Some longevity may be derived from completing the campaign with each of the two playable protagonists but with only the main character’s dialogue differing this doesn’t feel as essential as it could have. I have reached out to People Can Fly to clarify that this content is definitely missing and will update this review if I hear anything back.

Bulletstorm: Duke of Switch Edition is an impressive achievement, but glaring omissions prevent it from being anything close to a definitive version, and it’s disappointing that games from previous generations are still being ported to the Switch in an incomplete condition. That being said, if you want a unique, single-player FPS which runs really well in handheld mode and you’re not interested in challenge maps or multiplayer you will most likely have a great time.

This game was provided for review by Gearbox Games.