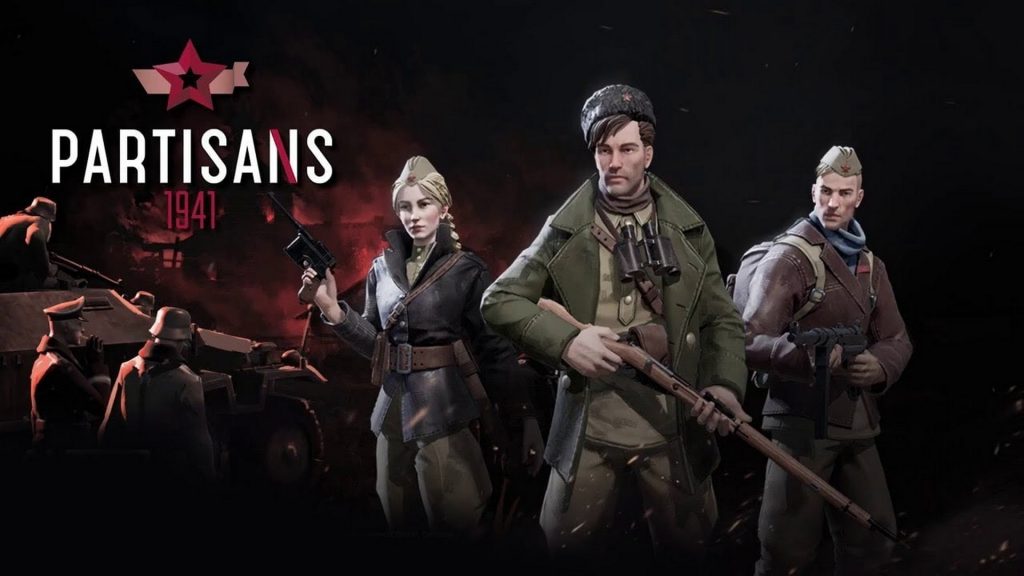 Partisans by devs Alter Games and published by Daedalic Entertainment is a real-time tactical stealth game set on the eastern front of WW2.  Playing your part in the war effort as a Russian army commander stuck behind enemy lines, it is down to you to rally the locals in order to form a group of Partisans, the dictionary definition being “a member of an armed group formed to fight secretly against an occupying force, in particular one operating in German-occupied Yugoslavia, Italy, and parts of Eastern Europe in the Second World War.” Can you make it out alive?

Partisans is certainly an interesting game to play and one that really made me think at every stage in the game as death is very easily come by.  Partisans come across as a mixture of Commandos and Xcom in that you have an isometric overhead style view, point and click to move your character from location to location and also you have hit and defence stats including chance percentages that alter according to terrain type, distance, weapon, etc.

Starting off in a war camp where you have been captured by the Germans you are introduced to your primary character Zorin who quickly makes his escape and is on the run from the enemy.

The tutorial that initiates gets you used to the controls and the gameplay mechanics.  There is a lot of sneaking around stealthily, avoiding the enemy’s line of sight that is shown in the game as you get close by as well as running from point to point.  Using the surrounding environment such as woodlands, hedges, walls, etc you circumnavigate the perimeter of the camp, all without a weapon.  At this point the checkpoints are bountiful should you get seen and shot.

To build your inventory you can loot chests within buildings, find unusual containers on the ground as well as rifle through fallen soldiers later on.  You will discover knives, guns and ammo as well as food.  Stealth is a major part of Partisans and you must use it wisely from creeping up on or around enemies to stashing dead bodies to stop them from being discovered.  One thing I quickly learnt was to move incredibly slowly through bushes.  The rustling sound that you create when travelling through the undergrowth can trigger an awareness bar on nearby enemy soldiers who will investigate should you fill it.

As you make your way through the missions, which are fairly roller-coastered in that you can’t wander off too far from the way that you need to go, you will obtain skill points for your achievements.  The skills that you unlock allow you to obtain minor enhancements that aid the character, for example, Zorin can unlock the ability to throw his knife further, have more inventory slots and have better chances of hitting with weapons.

Using your inventory you can select what you want in your hand.  From knives and guns to stones and grenades, choose wisely!  Stones are brilliant for sending the enemy soldiers off in the wrong direction so that you can safely sneak past.

Once you have the basics under your belt you will quickly begin to add people to your guerrilla group.  Each character has their own skills and weapons and these can be viewed and inventory swapped via the character screens.  From now on you can decide to either move as a squad or to control the characters individually, brilliant for setting up ambushes.  Should a character be hurt they will drop to the floor, if you have any meds you can walk over and patch them up or simply pick them up.

To really immerse you into the game, in between missions you can chat around the campfire as well as develop your base of operations.  The downtime is also great for ensuring that each character has the necessary resources for the next strike on the enemy.

One feature that I did find interesting is that you get warned about stealing early on in the game.  Should you break into a villager’s house and then take something from it such as food, etc. then this will have an adverse effect on your Partisans through stat decreases.  I like the morals!

I must say, playing Partisans really gives another perspective on the goings-on during WW2 as there are not many games that see you playing as the Russians during this era, especially tactical.

The graphics looked great on the PC.  I was running at 1080p and the details were crisp and the scrolling of the map smooth.  The ability to rotate the camera 360 degrees is great for working out your tactics.  The environment is lush with well-drawn buildings and animated swaying trees.  I did have a few issues initially where I couldn’t seem to click on the icon to aid my fallen soldier however this appeared to be fixed in a later patch, I also had a stealth issue where it was shown that I was hiding, however, the enemy still saw me at times.  Frustrating to say the least, especially if the save point was a short while ago.

The music in Partisans is brilliant and really sets the WW2 scene through its dramatic orchestral scores as well as haunting country-esque melodies.  Sound effects and the shouts from the enemy are all clear and concise although at times there was a bit of repetition in the lines said by your own characters.  When I first played Partisans the voice-overs were all in their native languages with subtitles below however you can select the audio to be in English or if you really want to turn it up a notch, Chinese.

Partisans feature around 15 missions and coupled with all the potential for exploration while navigating the environment the game will take you around 14 hours to play through.  I wouldn’t for a second believe that this is something you could achieve in a day as there is a very steep learning curve and it is very easy to fail a mission through being discovered by the enemy or an error on your behalf when throwing a grenade.

Partisans is a tricky game to master, especially if your previous tactics have been more of the ‘run and gun’ variety.  There is a lot to take in, however, the tutorial guides you very well so that you understand the basics as well as giving you in-game hints as to when there is a better way of getting around a situation.  Once they have dried up then it is over to you and your band of merry Partisans to carry on the uprising.  Thankfully there is an autosave feature, that will probably get hammered a lot, but so long as you learn from your errors then you will eventually make better choices and succeed! 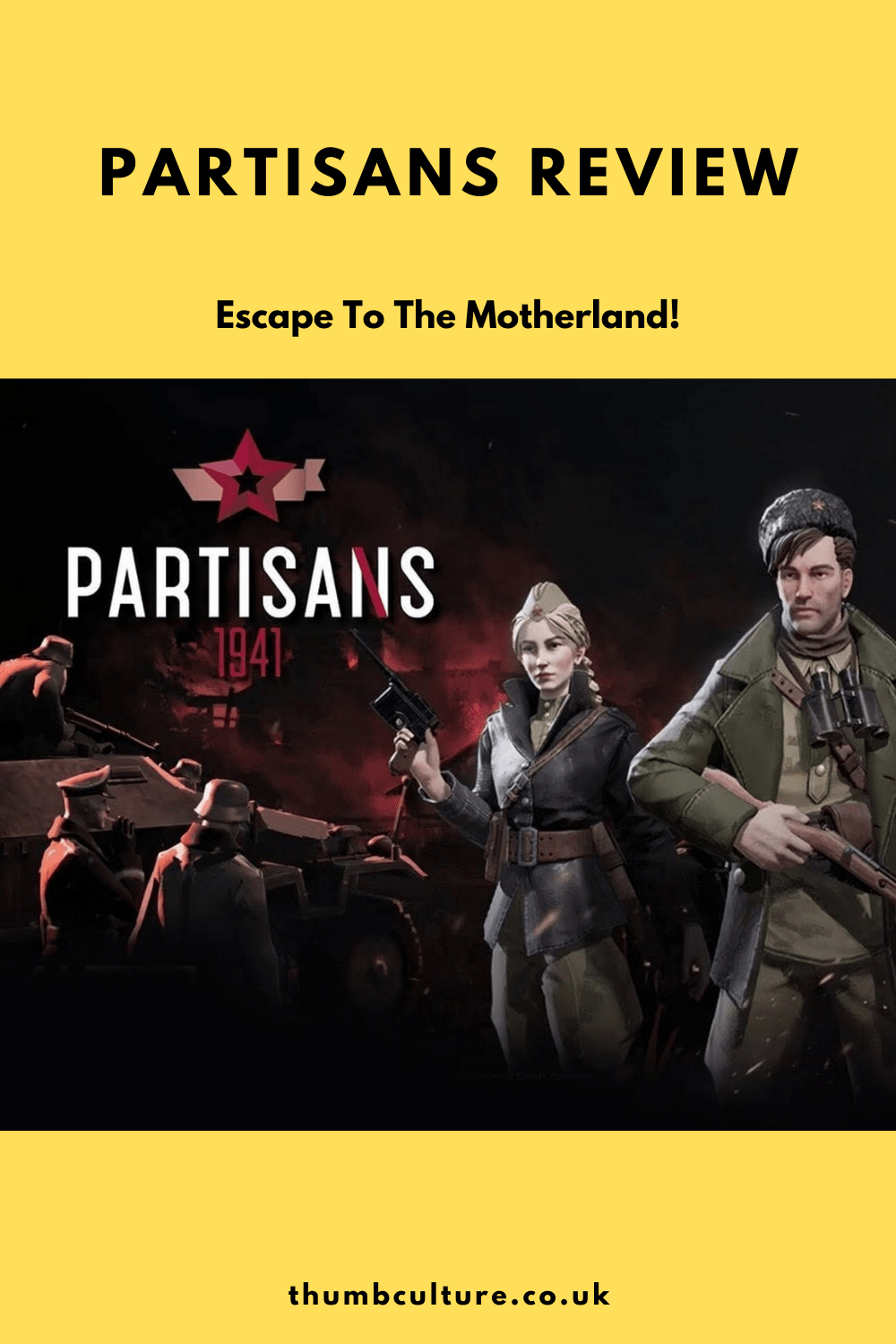