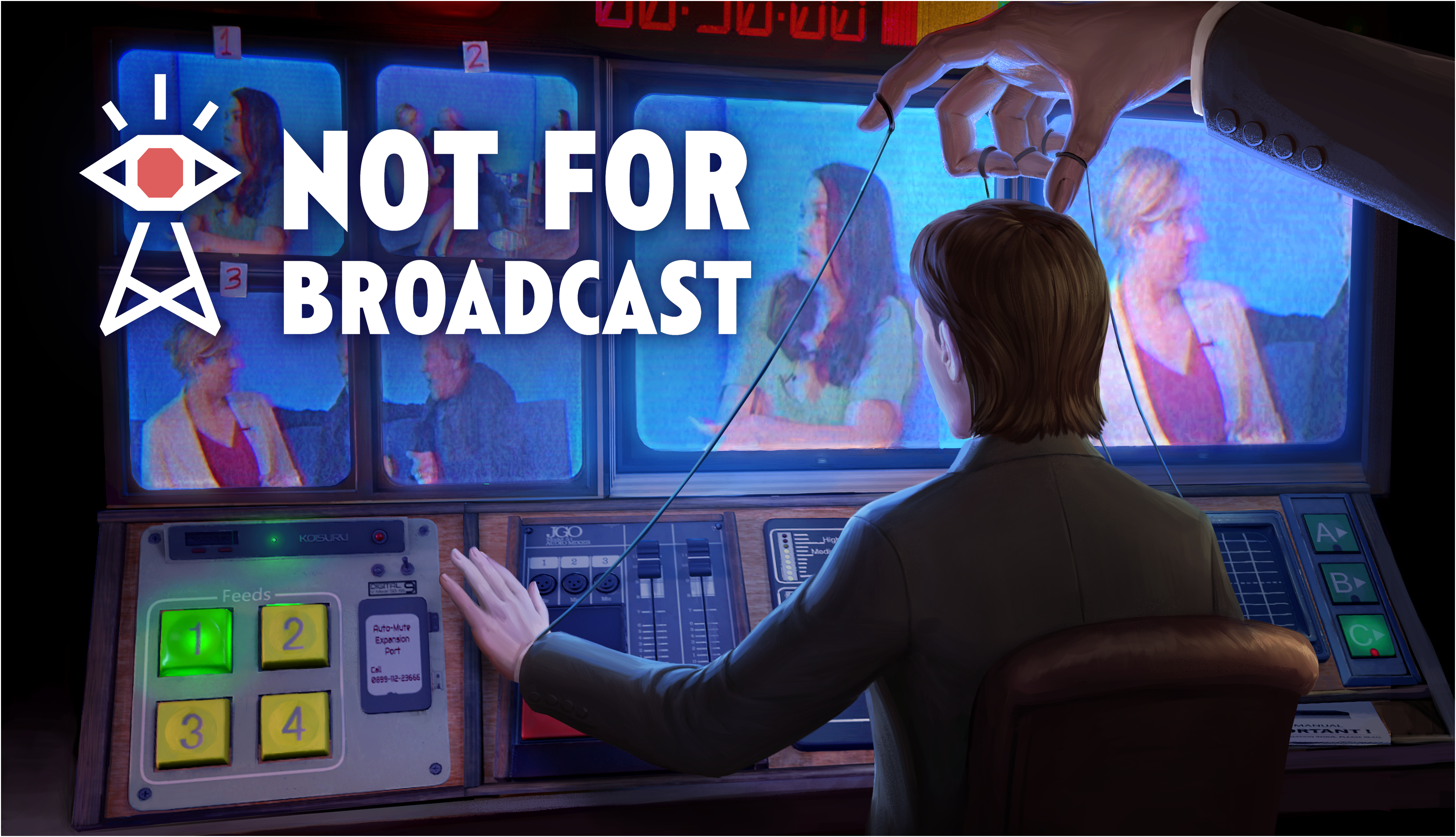 Have you ever fancied going backstage and accidentally picking up a role in the production of a TV station? If yes then Not For Broadcast is for you! Developed by NotGames and Published by TinyBuild Games, they bring you a sim game like never before. They let you control your own TV station and not only let you mix the video but decide on what gets put out to the general public. Will you go rogue? or will you be the best of the best of the best? Keep reading to find out how I got on in this comedic dark TV production simulator.

Where to start, Basically you land a job of controlling the desk by accident. Whilst the actual person who should be there is out partying having a time of his life. From what I have heard, this guy really doesn’t care about the news and loves his booze. One entering the game you are greeting with the new role and this is where you get your hands on your new toys! Thankfully there is a great tutorial otherwise I would have been extremely lost. With a lot of features to use along with a mini-game, there is a lot to keep you occupied.

After half hour of getting to grips with the controls and how everything works, I started to enjoy what the game was throwing at me. Everything from F-bombs to rude guests. You really have to be on the ball beeping out words and getting the cameras just right. For example, if you stay on certain cameras too long viewers get bored. The aim of the game is to get your views as high as possible, this is indicated at the top of the screen so it is nice and easy to see at all times. You really have to be concentrating, choosing the right feeds to ensure that you give your viewers the best experience.

Remember – The Viewers Are ALWAYS right!

Having said the above, it’s not just about controlling what you have in front of you. You can also control how your audience views the in-game sports heroes and celebs. You can paint perfect portraits or you can show the behind the scenes footage of what really happened. The question is how kind do you want to be to these people. After each Chapter, you can revisit the camera footage and you cant watch back everything you missed. These are the best bits and to be honest, I wouldn’t want to miss them, it does feel like you are watching TV within a game though.

Going back to the game you control everything from the cameras, audio, noise interference and even the trailers played in between segments. The mini-game was something I kept on forgetting about until it all started going wrong but it’s easy enough to get back on track. You can, however, have some more fun with the trailer tapes, as some of them clearly do not go through quality control! Also, don’t forget the studio can get extremely hot! Remember to the left you have some extra controls (Helpful hint there!).

Due to the type of game Not For Broadcast is you don’t really concentrate on the graphics, to be honest, it is more about the gameplay than anything else. However, they have done a great job with the overall look and feel of the console you work at. There is obviously a lot going on and the design of the screen you spend hours in front of has everything in the right place. All of the elements you control are nicely spaced out to avoid panic pressing something by accident.

As this game also contains real video clips I feel I should also comment on these as this is something I am always sceptical about. However, they are all put together really well. Kudos to all of the actors within the game they all play the parts really well. You can actually see attributes in them that Z listers these days have. It is a dark comedy with a lot to offer.

The audio is extremely well thought out. I say this as you have to really concentrate on what is happening and at no point did I get distracted because of the music. The game loads with an upbeat track and sets the tone for what you have to do next. Within the main game, there isn’t a music track as such as you are listening to what is happening in the studio. This is still quite upbeat. However, when you go into a menu screen you are greeted with an eerie, slow and almost tense soundtrack. Which brings on an extremely different mood set with the melody.

Currently, the game is not all that long. However, there is more and more content been released and there are also more chapters in the works. At first, this isn’t a problem, as if you are like me and struggle with multitasking then getting to grips with the game and not forgetting out elements takes time. Personally, I think the game is one play through kind of game as once you know what is going to happen there isn’t really anything new as such. There are other game modes which you can sink your teeth into once you have finished the main chapters as well. 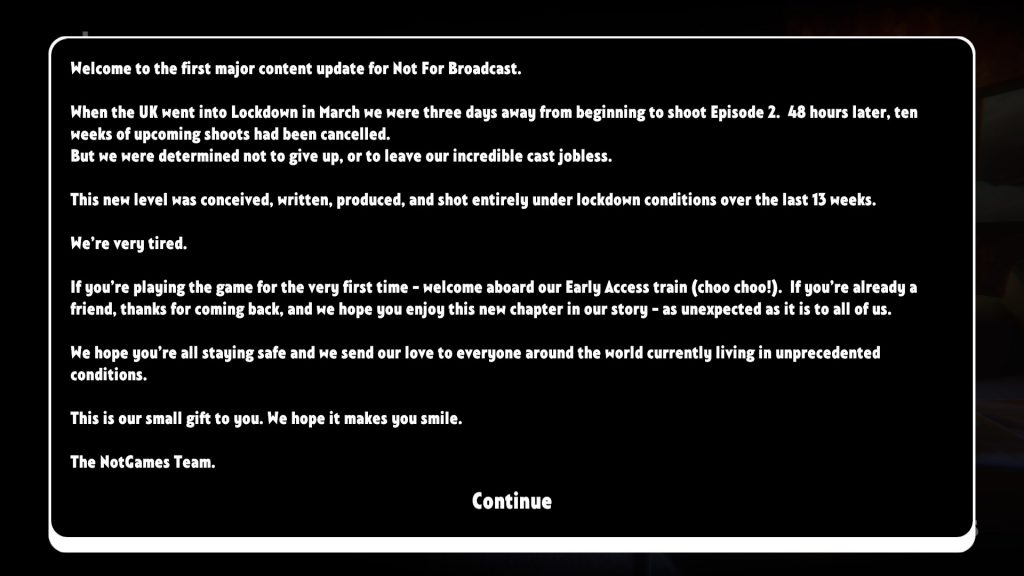 I enjoyed my time in Not For Broadcast as it was something completely different for me. As recently I have been spending most of my time on FPS titles. The only thing for me is that it sometimes felt a bit repetitive which left me bored on occasion. This is not me saying it is a bad game as everything is really well thought out and developed. I do however think that Not For Broadcast would be a much better title as a VR release. They definitely missed a trick on this one, I actually think it would make the gameplay on Not For Broadcast next level. Not only that I think it would make a really enjoyable VR experience. So taking all of this into consideration, I award Not For Broadcast a Thumb Culture Bronze Award