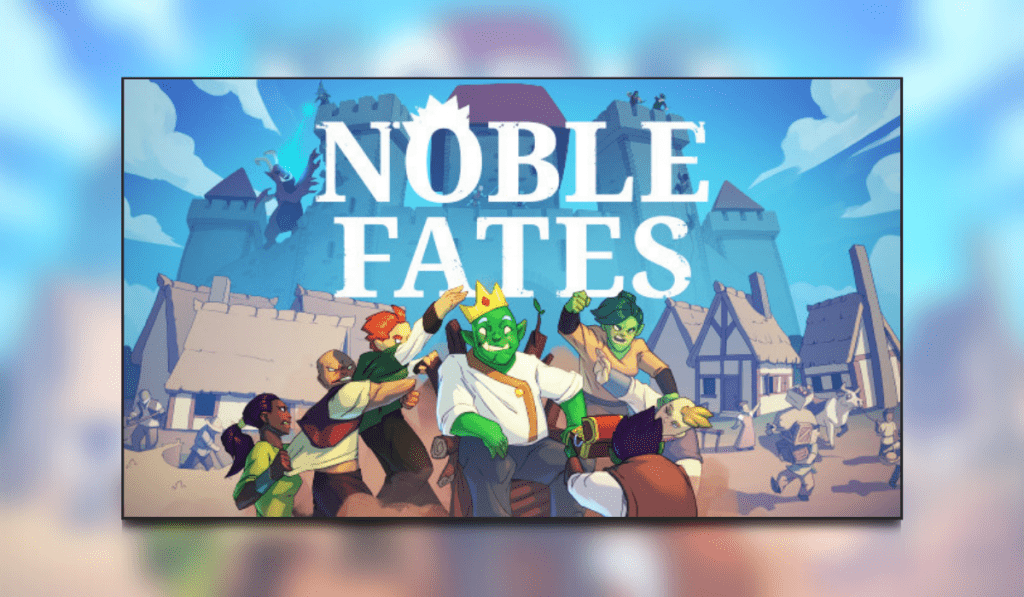 Noble Fates is a 3D kingdom builder sim game developed and published by Xobermon LLC. Set in a world where a pantheon of gods tries to bring order to the chaos of mortal kind. And opposing them are demons & devils who thrive on the chaos. You play as a Kontra, a type of demi-god with this ability and is keen to prove themself by building a kingdom that will last the ages. This means making decisions to influence their fate.

Seeing the kingdom grow with everyone doing their part and expanding within its own borders and relationships with others. With great power comes great responsibility. So will you be remembered as a benevolent, kind ruler or a cold, cruel one? I played Noble Fates on PC where it is available now on Steam early access.

In The Great Game Can We Achieve Noble Fates?

I was excited to play Noble Fates with the high fantasy setting giving the kingdom building sim something a bit different. I would love to hear what you think about the game, as would the whole TC team. So feel free to leave a comment below on what you think or are looking forward to with the game.

I must admit I hadn’t played many kingdom builder-type games before Noble Fates. When I started, however, the lore and worldbuilding were more substantial than I expected. Playing as a Kontra and seeing the struggle between the demi-gods and devils was interesting. Plus the world’s history was told slowly through dialogue. Starting with a kingdom of 4 people, I learned everyone has some background to them. This, in turn, led to the characters having randomly generated personal histories and skills determining their personality.

I didn’t realise going into it, but each person’s personality is a big part of how well your kingdom succeeds. They have their own thoughts, feelings and ambitions meaning you can’t please everyone. Your relationships with others in Noble Fates influences everything from being at peace to getting good trading prices. I found the dialogue basic and poorly done, little more than jibberish. Sadly, sounding more like improv when given a handful of names.

The first few in-game years serves as the tutorial and did help me learn the ropes of the game. Crafting and building have a simple-to-use interface and menus. I did find undoing misplaced structures or canceling tasks very frustrating and not at all user-friendly.

I enjoyed the leveling up and development mechanics of Noble Fates, however. The various members of the kingdom are given innate skills to start but they can be developed, even learn new ones. This means everyone has a purpose, from farming to foraging, and the community becomes well-rounded. I appreciated the ability to go at my own pace, literally with the options from pause to extra fast forward and seasonal changes. Meaning having plenty of time to be prepared or to get these points in the game over with quickly.

Noble Fates uses a low poly design style which does work with the environment but not so much with the characters. Given how much of the game is character-based, I felt not enough work was put in here. At least in the early access version of the game here. Taking place in a high fantasy setting there were various monsters and demons/devils around but otherwise, the setting felt realistic. I had no issues or glitches while playing and used the default settings on my PC. This allowed for adjusting several settings from resolution and framerate to shadow quality and ambient occlusion.

I quite enjoyed the sounds and score of Noble Fates overall. The score was really peaceful background music throughout playing and played a big part in making the game feel lively. I did find the orcish speech felt basic and didn’t really add anything to the game. Sounds from the environment and playing did help me feel immersed, however. Various animal sounds were present and using weapons and tools made actions feel like having more of an effect while playing.

I found that Noble Fates has a lot of content for those who enjoy this sort of game. Different approaches to the type of kingdom you build offer a lot of replayability. I had my playthrough with a community of orcs but I’d like to see how that may change in new runs. There are different elements to suit different players. Such as farming and crafting to sim elements with developing relationships. And while I didn’t get there myself, I can see there being many hours of gameplay here as you start from a wooden shack with 3 allies to a grand castle and lands full of people.

I definitely see a lot of potential here with Noble Fates. The setting and worldbuilding are detailed but its delivery through dialogue is the weak link here. I found the menus etc. used with crafting and other tasks straightforward, actual gameplay often wasn’t as user-friendly. Movement and switching between tasks are very awkward and that’s if you figure out how. Especially for being in early access, the game ran smoothly and the environment looked decent. Just when it came to character design and dialogue, things fell short despite enjoyable background sounds and music. I feel despite all of that there are the makings of a good game here with hours of playtime if you stick with it.

If you enjoyed my thoughts on Noble Fates then please check out my preview of Dolmen right here.