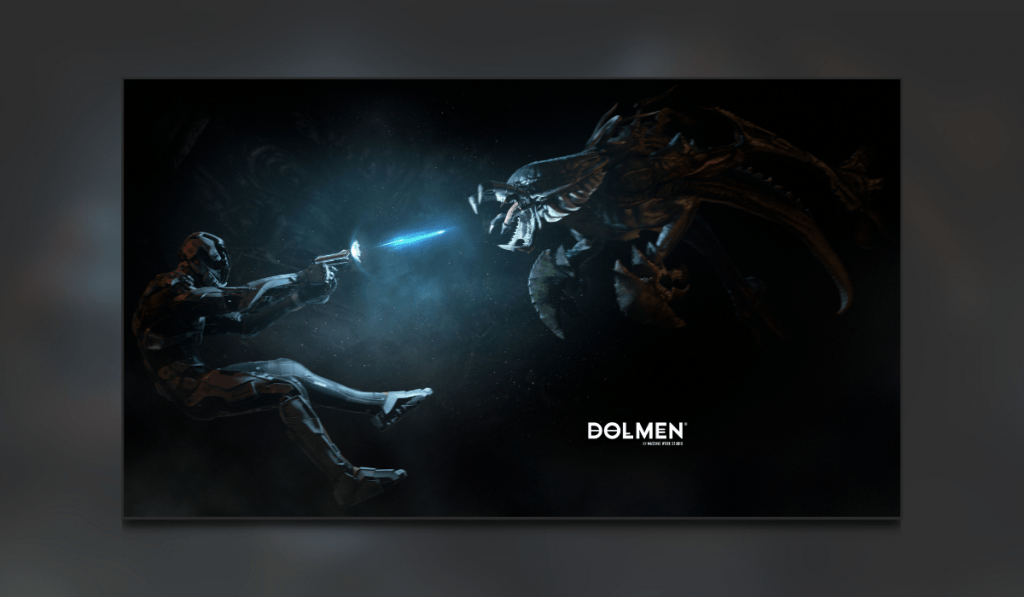 Dolmen is a horror action RPG set in the far future in a distant part of the galaxy. Previously having made Tap Hitz on mobile, this is the first major release for Brazilian developer Massive Work Studio. Massive Work made the game in partnership with publisher Prime Matter. And was made possible after a successful Kickstarter campaign. The titular Dolmen is a mysterious mineral whose discovery led to being able to cross into parallel universes. As you may expect this doesn’t go well and various monsters and creatures enter our universe. You play as the unnamed protagonist tasked to find out what happened on Revion Prime and recover the mineral.

I was able to play this preview version with a full release on PC during 2022 and later planned to be released on PS4 & Xbox One.

Slay the monsters, stop the bad guys and save reality in Dolmen. No big deal.

I am excited to see more of Dolmen with the full release next year. If you have gotten the chance to play it or are also excited then let us know. I and the rest of the TC team would love to hear from you in the comments section. After all who doesn’t like a bit of horror in outer space?

I played some select parts of this preview version of Dolmen and what I did play I really enjoyed. There were elements of games like Dead Space (without the gore) and Dark Souls with how it played and felt. The story is really interesting, experiencing it through flashbacks and computer logs scattered throughout. The plot is drip-fed just enough to keep me wanting to know more. The game begins pretty much in the thick of it with plenty of monsters in your way. Dying in Dolmen is very rogue-like, you respawn at the latest beacon with all the monsters having returned. And assuming you make it, you are able to reclaim your materials from where you last fell.

As well as an investing story, the exploration and combat were solid. The setting of Revion Prime and this mining colony meant it was expansive enough before feeling too open. The environment of Dolmen looks great, especially how detailed it felt. From the spaceship interior to the planet surface, it made walking and exploring very pleasant. Weapons and armour also looked really cool, especially the energy shield you summon at will.

The combat was really well-done with the variety of weapons and armour options. I felt targeting and locking on awkward at times but overall still good. Managing available energy quickly becomes important as your source of ammo and healing means finding a balance between the two. Switching between melee and ranged weapons, as well as different types of damage, made fighting the various monsters more rewarding. Likewise, the monsters also deal out different types of damage so being able to have acid or fire-resistant armour for example was key. Crafting allows you to even build your own gear with rarer materials giving a choice of properties.

I am basing my Dolmen preview on the PC version and all the settings that go with it. From low to epic there are options to change multiple settings, from resolution to ray tracing. I used the epic graphics option and felt the game ran quite smoothly overall. Though now and again cut scenes would lag and so felt a little jarring. From the planet surface to deep underground, the different environments looked really good. Even close to realistic given the futuristic sci-fi setting and likewise for the various monsters and the protagonist themself. I was left feeling with the level of detail, a significant amount of the areas seemed closed off. However, this may come with the full release next year.

Dolmen’s audio design was excellent both with sounds and score. Taking places at very parts of this alien planet full of technology so the sounds were numerous. At times this meant ambient and very often as significant as the graphics design. The sounds of the many monsters you encounter are in a word, creepy. From giant bugs to mutated humanoids, they have their own sounds and are often heard before being seen. I really enjoyed the weapon sounds too which really added to the experience. At one point you get a chainsaw sword type weapon and playing on the controller felt oddly tactile like the axe in 2018’s God of War. The protagonist’s dialogue did feel dull and robotic almost, not matching the situation at all in my opinion.

I played through 2 chapters in this preview version of Dolmen but enjoyed what I have seen so far. I did die quite a bit so playtime was 3-4 hours but I enjoyed my time playing. The game follows a fairly linear path and story but with different ways to approach playing. The variety available suits different playstyles from levelling up your character to weapons & armour. I found the unveiling of the story through log entries and flashbacks very engaging. I wanted to keep playing due to this worldbuilding since I feel we don’t have many futuristic sci-fi games like this. For the trophy hunters out there, Dolmen has 30 achievements on Steam and possibly more with the full version next year.

I quite enjoyed Dolmen and especially for a debut PC/console game I look forward to seeing what Massive Work makes next. With an engaging story told in an interesting way I was on board right away. The setting and worldbuilding and the potential those bring made me want to see and learn more. Gameplay was very good with the variety both for the player and the monsters you encounter. Visually too, the details and design looked great. Dolmen indeed did look and sound fantastic, definitely a strong suit here. A few hiccups like lag in cut scenes and bland voice acting were there but not enough to spoil the experience. And for those looking for a game to dive into, I suspect there will be no shortage of that here. Plenty to do and explore and achievements to unlock.

If you enjoyed my preview of Dolmen then why not check out my review of the Switch version of Star Wars: Knights of the Old Republic right here.