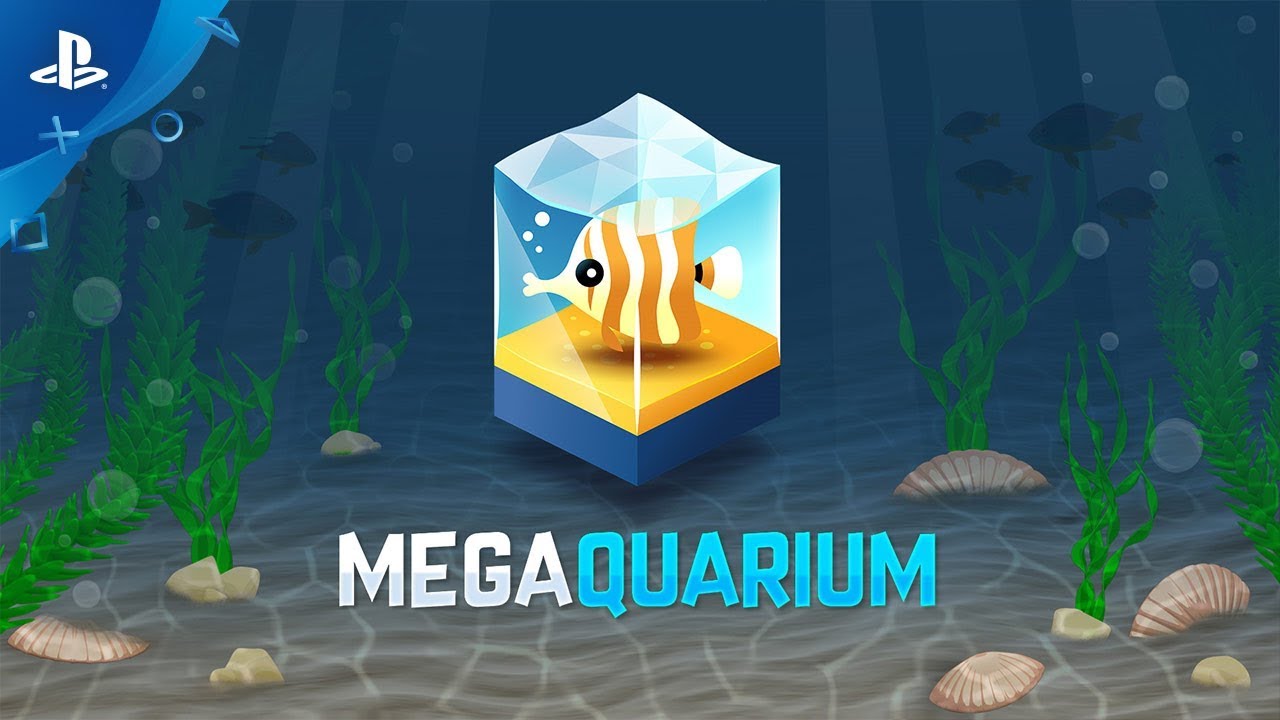 Swimming into gaming stores across all consoles on the 18th October is Megaquarium from developers Twice Circled, the creator of the wonder drug tycoon game Big Pharma.  If you are a huge fan of economic simulation games and also want to play something a little different, this brand new little gem may be just what you are looking for.

I love tycoon games.  There is something rewarding in trying to figure out the correct strategy for a particular situation and then either seeing it come to fruition or cause a catastrophic event further down the line.  Since the early days of games like Theme Hospital, Theme Park, Sim Tower and Holiday Island I have been hooked.  To be given Megaquarium to review was mixed emotions for me, yes I love tycoon style games however I am probably the worst when it comes to looking after fish.

Megaquarium, in a nutshell, lets you build your own aquarium for the general public to walk around while you generate an income to further your tanks and building.  Starting with a few glass tanks and placing filters and heaters in the correct locations you begin to add livestock and decorations to create amazing displays to wow your new best friends.  With nearly 100 different marine species to discover and eventually look after you must carefully design each tank to suit the requirements of that species, albeit a fish, shark, crustacean, coral, jellyfish or even a turtle.  Get it right and you have a happy tank, generating income, get it wrong and there will be lots of dead things bobbing around in the water.

In true tycoon style, it is down to you to hire the correct staff based on their range of talents and skills as well as decide which of them you want to train generally or even make them become an expert of a particular field.  If you want to give talks about certain species and at defined times throughout the day then you must have competent staff.

Research rears its fishy fin in Megaquarium.  As guests experience your amazing tank arrangements you will earn points that you can choose to assign to discovering new livestock and equipment.  The idea is to keep upgrading and expanding your awesome aquatic stage show to then let you unlock the most prestigious animals and displays within the aquarium industry.

As the Megaquarium curator, you are in charge of every aspect of the place, therefore, you will need to carefully manage your finances with a fine fishbone.  Hiring the correct staff for certain animals is not cheap, nor is the food stock or supplements that you may require.  Don’t think for a second this is going to be too easy, if you want that huge monstrosity of a fish tank then you will need to work hard to afford it.

Most of you have probably visited an aquarium at some point, therefore remember the obvious things like seating, toilets, food and drink outlets as well as the annoyingly overpriced gift shop that waits for you to walk through in order to reach the exit!  Profit is to be made everywhere!

Megaquarium has a couple of game modes to test your skills.  The first is the curator school style campaign mode where each of the 10 levels will attempt to teach you the fundamentals of the game so that you can confidently design and manage your own aquarium.  The levels do well to build you up slowly however my only complaint was that I had to keep opening the objectives tab to see what to do and then go around the screen to see what each button did.  You are literally thrown in the deep end of the tank as from the very beginning all of the toolbars are unlocked.  Now don’t get me wrong, it is good to not be completely spoon-fed however there was the odd occasion that I kept on missing a certain button or could not understand exactly what I was trying to achieve as I thought I had completed it.

The second mode is the good old fashioned sandbox mode.  Fully customisable and with a random challenge generator which will keep the most hardcore tycoon warrior hard at it for quite a while.

Playing Megaquarium on the PS4 Pro it ran amazingly smoothly even when there was a lot going on.  The grid-based view when deploying items was easy to navigate as were the toolbars once I started getting more experience in.  Ok the graphics are not realistic raytracings however the basic polygon style characters and items works well and does not detract from the game at all.

I love the way you can zoom in and out of your aquarium and actually get into the tanks to see what the marine life is up to and marvel at your amazing tank designs.  Each of the 97 species is beautifully animated and have their own traits as they navigate about their daily lives.

No complaints here, it is everything you want to hear in a tycoon game.  Ambient background music, chatter of people, sounds of marine life splashing about, notifications.  Megaquarium does it perfectly.

Megaquarium does have an end goal and that is to be the biggest and most prestigious aquarium in the industry.  It will take you many hours to achieve this!  Even the 10 campaign levels take a little while to get through as you are introduced to more and more pieces of equipment and objects to design with.  Then there are the decisions you will need to make such as do you group the marine life or do you deploy a centralised pump system?

I really enjoyed Megaquarium, I found it refreshing to take on the challenge of designing and managing my own aquarium and it took me right back to my childhood roots.  There has clearly been a lot of love and attention given to the game mechanics as well as the background understanding for each of the various marine species.  Will I ever get to Megaquarium status? Watch this space!