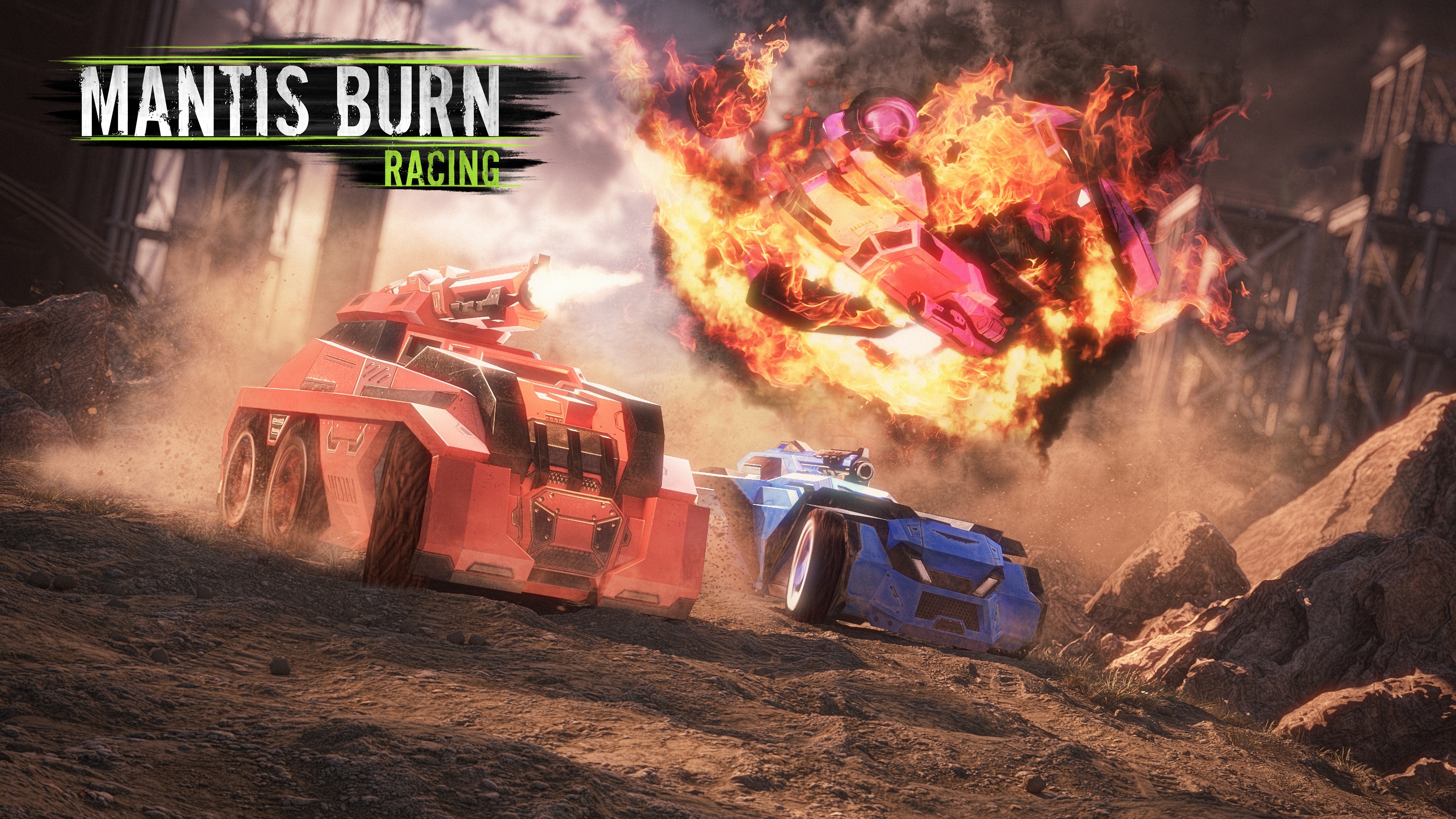 I’ve played a fair few racing games in my lifetime and thankfully have seen the evolution from the days of Super Sprint and Outrun to the latest offerings like F1 2018 and Project Cars.  Car games are fun be they realistic or arcade-style.  For me, there’s nothing better than being rewarded by a win for your efforts to race a car around a course.  Indie Developer Voofoo games’ Mantis Burn Racing has graced the Xbox One, PS4 and Steam store since the middle of 2016 and was announced at the recent EGX in Birmingham, UK that a Nintendo Switch version is in the pipeline.

In a moment I will talk about the new BattleCars DLC, however its worth quickly mentioning a little about Mantis Burn Racing incase you’ve never played it before!

So as I previously mentioned the game is a top down racer, similar to MicroMachines, Bang Bang Racing and it even gives a slight nod to Grand Theft Auto 1&2.  A video review of Mantis Burn Racing by fellow Thumb Culturist Stu can be found here.  Players race bumper to bumper around detailed tracks performing drifts and well timed over takes in an effort to win the race.  There is a compelling career mode that takes part across a 9 season career structure whereby you are in charge of your progression road.  There is also an 8 player multiplayer mode.  For the non-antisocial players there is also a 4 player local split screen for those Saturday night gatherings.  Nothing better than beer, pizza and some local split screen gaming in my opinion!

Vehicles can be chosen from 3 categories and fully customised to provide unique handling and performance traits to gain advantages on the track.  As you level up, an RPG style system includes for upgrade slots for your vehicle offering a large amount of vehicle variation.  The base game itself has 12 reversible tracks set in 3 challenging environments and on the PS4 Pro, full 4K support at 60FPS is offered.

There is something for everyone as there are 10 game modes such as Knockout, accumulator and time trial so there is always something to be playing for.  Weekly challenges give you a chance to compete with the best players in the world for top bragging rights.

Ok so with the base game outlined it is time to review the new DLC “BattleCars” that has just been released.

BattleCars is a paid for DLC that adds a new element into Mantis Burn Racing that so far has never been seen in the game.  The new DLC offers 3 new military grade vehicles (Stinger, Lancer and the Mauler) with mounted weapons along with 3 new destructive modes; King of the Track, Survival and Accumulator Rumble to whet your explosive appetite.  There is also a new challenging battle career that is composed of 26 frenetic combat events to lengthen the Mantis Burn Racing campaign.

Well yes, it is actually not that bad.

The new game modes can be played either online, locally or by yourself against bots.  I had a play of the Accumulator Rumble mode and found myself hooked for a while which really surprised myself as I can at times have the attention span of a goldfish.  The race began from a grid of 8 cars, weapons (a forward facing machine gun) were activated after the first checkpoint which allowed players to settle into the track before the chaos ensued.  Points were scored by distance travelled and by destroying an opponent.  To help with damage control, repair pads, similar to a pit lane were situated around the track.  The machine gun had unlimited ammo but suffered from overheating if repeatedly fired.  The dropping of mines (ahhh great flashbacks to local network play on GTA2) was limited to 3 mines per lap and had a detonation timer to prevent you from dropping them in the hope that some poor bugger would eventually drive into them!  As well as weapons there was also a nitro boost that steadily refilled however timing the usage was one of the biggest issues for me as I tended to forget about the impending hairpin corner and instead tested to see if my car could fly.  Crucially with racing games it comes down to car handling and controls, well i’m pleased to report that I found them to be pretty darn good!

The second game mode that I played was King of the Track.  In this game mode, a King is chosen at random at the start of the race and starts slightly infront of the field of cars.  The objective is to earn points by passing checkpoints along a course.  If the King is blown up then the person who carried this out becomes the new King.  While you are the King, your top speed is reduced.  I must say this was one of the most infuriating game modes that I have ever played as other players swamp you making it inevitable that you wont hold the crown for long.

The final mode to test me was Survival.  In this game mode the objective was simple.  Drive the furthest you can without being blown up.  If you are blown up then you are out.  Immediate tactics are to hang back and get behind the others! Once weapons are initiated it is guns’a’blazing however mines didn’t unlock until the second lap which is not a bad thing as it would only serve to ruin your game as it did mine when the top player chose to deploy on a bend that I was approaching!

Carrying on from the high quality visuals already seen in Mantis Burn Racing, the BattleCars DLC expands on this with further nicely rendered vehicles and smoothly animated explosions.  On the PS4 Pro, the graphics were crisp and looked really good.

Mantis Burn Racing features an original ambient-electro soundtrack that was written for the game by Birmingham based composer Robert Paul Allen.  The music lends itself to the game by providing some background beats while having fun on the track.  In-game sound effects are good and serve their purpose, the overall mix is well balanced with no overly loud noises to blow your headphones up.

The new BattleCars DLC, for the price of £1.99/$2.99/€2.50 adds a lot of bang for its buck and in my opinion is worth the price if you already own the game.  Having weapons in a car game is a great twist if you have already been used to merely racing around a track previously and is a great way to let off some steam.  I don’t condone violence however we have all probably had that moment where somebody has upset us on the road and we have pretended that the top of the gear stick houses a machine gun button…ok just me then. BattleCars DLC for Mantis Burn Racing is available now and I award it a Thumb Culture Gold trophy.