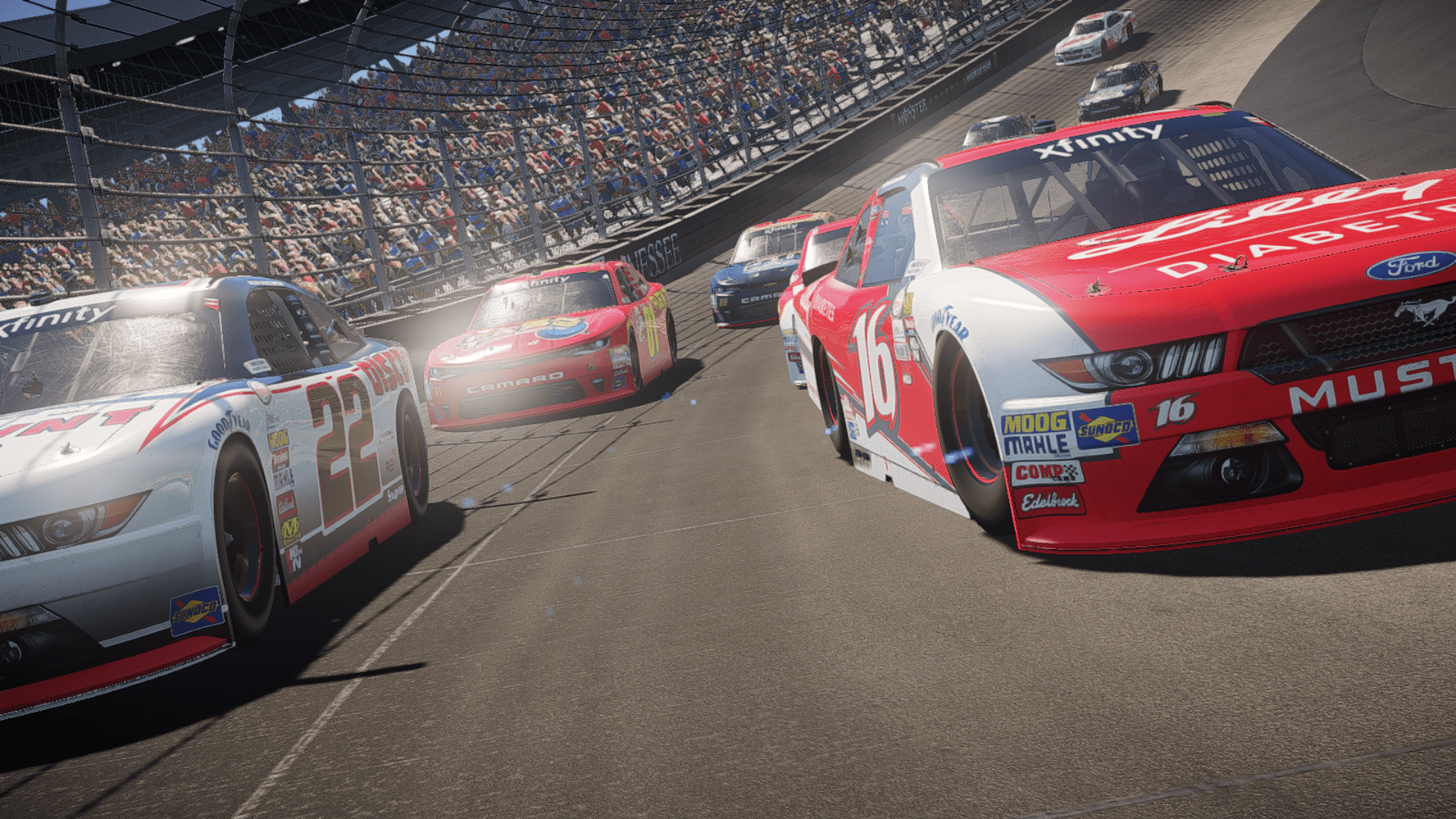 NASCAR Heat 2 is quite clearly a sequel to NASCAR Heat, but having not played the first iteration I was able to go in to this game with a clear mind. Although how much of a good thing that will be is left to be seen.

Developed by Monster Games and published by 704Games, NASCAR Heat 2 takes on the massively popular racing franchise over in the USA. So does it cut the mustard with an F1 fan like myself?

The gameplay of NASCAR Heat 2 is summarised in the following words, Round And Round. Essentially it’s an oval racer which challenges you to draft your opponents in order to overtake and make your way through the field. Sounds simple right? Well, you would be a fool to believe so. It’s tactical and brutal, go down to low on the corners and you can quickly find yourself facing oncoming traffic.

When you first load the screen you are greeted with a simple driver profile creation, which allows you to pick any of the drivers and then assimilate their driver numbers. Then onto the modes available to you, Quick Race, Split Screen, Challenges, Championship, Career and Multiplayer are all here each offering essentially the same gameplay just with a slight twist. Championship has you taking control of a team and playing through the entirety of a race season, gaining points and winning races.

Challenges give you a predetermined scenario that if you manage to complete you are then given a video from one of the professional drivers giving you track tips on the particular locale. These can be quite interesting but as with anything its all easy in theory. Its when it gets to the track that it all changes.

Then the Career mode, this lets you control your fate and take part in hot seat challenges, trying to impress teams to get a permanent drive-in seasons to come. Perform well and the other teams will take note and eventually you could be leading from the front in a car of your own.

Then we have the Multiplayer portion of the game, if you are able to find enough people playing online you could find yourself in a nice lobby waiting for the race to start. Then once it starts all hell breaks loose. There are cars everywhere, nudging, slamming into each other and then disappearing off into the distance. I have to admit to not being very good, although on my first race online I did manage to score a 5th place finish. Out of eight drivers, and one of them was static for the majority of the race. I’m still taking it as a win!

The actual racing is pretty solid. I have never driven a NASCAR so I can’t compare, but the cars seem to stick to the ground well as you go around the corners, with the brake being used to good effect so that you can make the corner successfully. Contact with other cars is always fun and a little nudge on the rear of the car in front can send them spinning out and causing enough carnage to leave your rear view mirror full of smoke.

All in all the gameplay is solid, although I felt that it just wasn’t enough to pull any non NASCAR fans into the series.

The graphics were decent enough, car models were accurate (I guess) and the environments were (I’m guessing) detailed as per their real life counterparts. Lens flare from the sun was good. You can tell that I am grasping at straws right? This is the kind of game that if you are looking for amazing graphics then you will be sorely mistaken. They are adequate.

Engine noises and impact noises are the run of the mill stuff with loud roars from the cars when you put your finger down. Aside from that the soundtrack is a standard Rock inspired number of tracks which fit in perfectly with the on screen action. Nothing is going to make you go out and look for the NASCAR Heat 2 soundtrack.

NASCAR Heat 2 will appeal to a number of people, but primarily it will appeal to those people with a familiarity with the NASCAR series. Someone like myself who has no knowledge of the series will be hesitant to purchase this game purely because of the underlying disinterest in the series. However, there is enough content in the game to keep you playing for a long time. Especially with the online modes. The danger will be that with a lack of interest comes a lack of purchasing and this will in turn mean a lower number of people playing online.

In conclusion, if you are interested in the NASCAR Heat series of games, then this is probably a great game for you to pick up. If you are like me and a newcomer to the series then you probably wont get the fun out of it.

The game mechanics are solid, the graphics are ok and the amount of content included with the game means that I award NASCAR Heat 2 with the Thumb Culture Bronze Award.