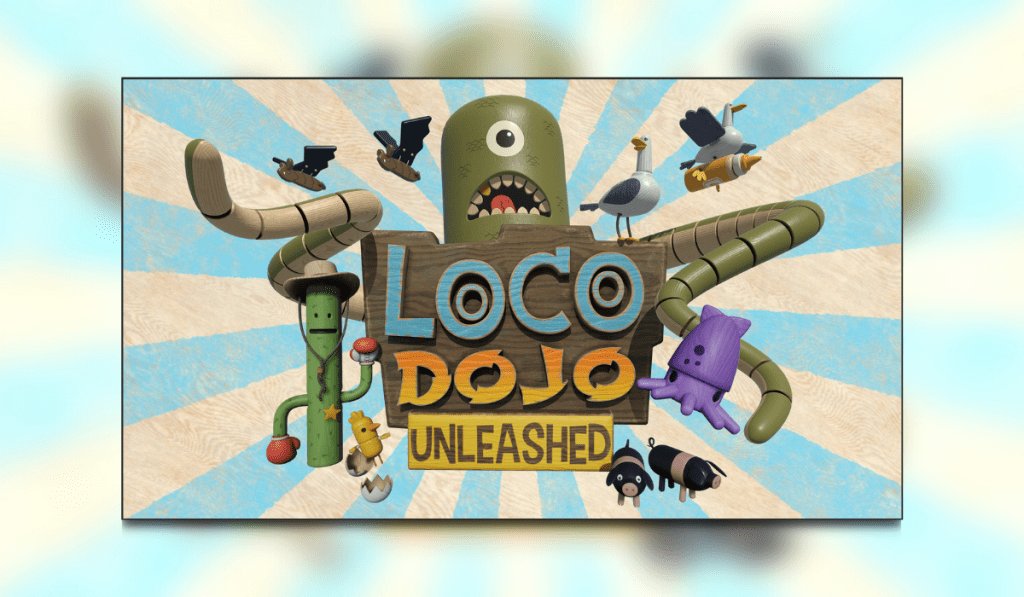 Loco Dojo Unleashed is the party game that you have been waiting for on the Oculus Quest 2.  Developed by Brighton-based Make [Real], the crazy family-friendly tournament and will be available across all mainstream VR headsets in the future.

The headset is on. Let’s get into the party game action!  Feel free to check out my other reviews here!

Loco Dojo Unleashed is a whacky VR tournament comprising of a central board game wheel that you spin in order to select one of the sixteen crazy mini-games to play.  The goal is simple.  Compete and win.

From the off, Loco Dojo Unleashed is very accessible and easy to enjoy thanks to the four available game modes.  If you are on your own then you can choose Solo Dojo whereby you can practice mini-games of your choice.  If you fancy a bit more of a challenge then you can undertake the Ten Trials Test in which you attempt to win the ultimate goal of a black headband in ten spins of the board.  It is worth noting that when it comes to player customisation there are twelve cool masks to unlock and choose from via achievements.

With multiplayer, there are two modes on offer.  A Quick Match that puts you in a four-round rapid-fire tournament and the longer main game mode called Table of Trials.

Table of Trials is the Mario Party of Loco Dojo Unleashed.  Here you get to compete as 1 of up to 4 online players at the same time.  On your turn, you spin the board game wheel that lies in front of you and it is where it stops that selects the mini-game for everybody on that round.  The idea of each mini-game is to obviously win and this awards you in Golden Suns and begins to level up through the coloured headbands.  This in turn helps you get closer to overall victory whereby you want to don the highly sought-after Black Headband and enter the Temple.

Each of the sixteen mini-games offers a variety of game mechanics to quickly get the hang of.  From firing wooden snakes with a bow at parachuting burgers, swatting bugs on the floor with a foot on the end of a rod to catching flying fish in your crab claws.  The Oculus Quest 2 controllers are put through their paces, as are you, in a really fun and imaginative way that immerses you in the party action.  Some of the mini-games will have you laughing, I especially loved the piglet milking one, especially when the overfed piglet backfired milk across my eyes!

Once you have the black headband you can spin the wheel in order to move your playing piece towards the temple.  Be warned as other players can block your path forcing you to seek alternative ways around.  Once in the temple, a little like Trivial Pursuit, you need to win a final trial to earn your first place trophy!

Loco Dojo Unleashed looks amazing in VR on the Oculus Quest 2.  The graphics take on a real wooden vibe that reminded me a little bit of Little Big Planet.  I can see how this will appeal to families worldwide thanks to the friendly-looking characters and well-designed games.  I experienced no motion sickness as all of the games I played more or less had you rooted to the spot.  The actions were smooth with no frame stutters whatsoever.

When it comes to the audio I must give a massive congratulations to Make [Real] for getting the iconic Brian Blessed to act as compere.  The guy is a total legend in my books and his deep booming theatrical tones keep you smiling throughout the game.

The soundtrack to Loco Dojo Unleashed varies between mini-games and matches the environment around you.  Nautical, wild west and of course Far Eastern vibes emanate through the speakers of the Oculus Quest 2, the quickening of the music indicating that time is nearly up!

With both solo and multiplayer modes available you can have a blast for an hour or so.  The main fun is within the multiplayer element.  One thing I noticed was that at times the Table of Trials managed to repeat a few of the games during a session rather than pick one that we hadn’t played already.  Although at first this is not an issue, especially when learning the games, this can get a little bit tedious if it happens.  One saving grace is that a few of the mini-games do feature two ways of playing, for example in Apple Dash you could be either controlling the pig to get apples or throwing bombs at the pig.

This game was much needed on the Oculus Quest 2 as there are not many party games like this for it.  Loco Dojo Unleashed is a pleasure to play.  With its lovely graphics, awesome audio, exciting game mechanics and whacky mini-games, Loco Dojo Unleashed hits high and scores an impressive Thumb Culture Platinum Award!