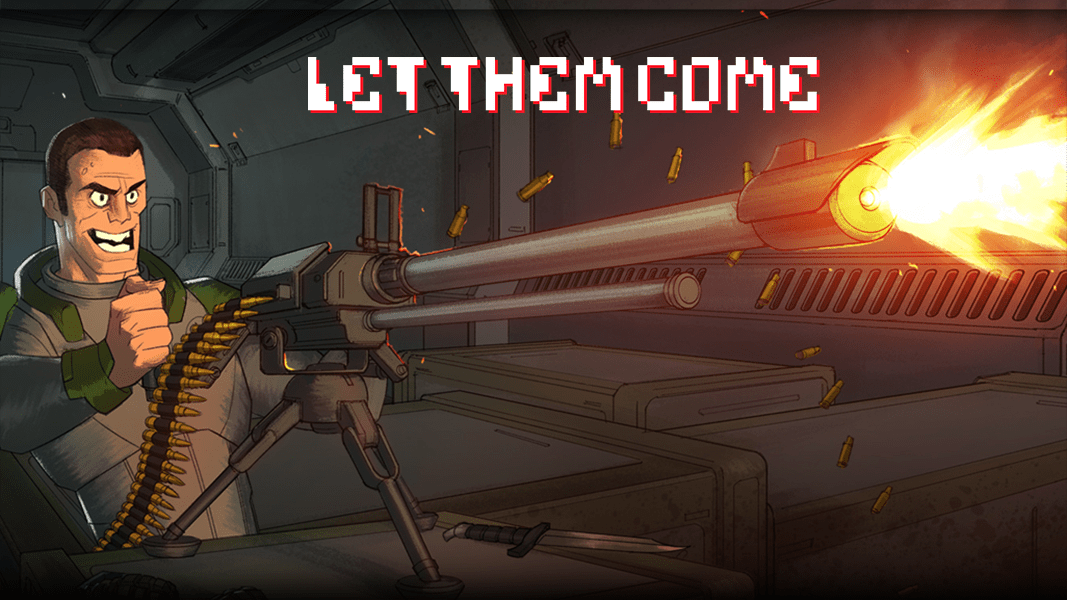 Let Them Come is one of those games where it doesn’t really need a massive amount of description, it is what it is, and what it does, it does incredibly well. Developed by Tuatara Games and published by Versus Evil you control Rock Gunar on this pixel art shoot ’em up. So what do you do? Let’s take a look.

You are tasked with preventing the alien hordes from getting past you. In its simplicity you stand with your gun aimed at the aliens and you blast them all away. Or at least that is how it was going to go in my head.

In actual terms, what you are playing is a simple game that is difficult to master, with battle tactics having to be used throughout your time. Simply holding down the fire button will only get you so far.

As you kill the aliens you get coins that you can then spend on upgrading both yourself and your weapons. Anything from rapid fire, grenades, all the way to black hold grenades which come in handy when you are up against larger crowds of aliens.

Let Them Come has a large array of enemies to take on, from small spiderlings that crawl along any surface and launch themselves at you when they get close to aliens that walk along the ceiling that then drop eggs which hatch into those bloody crawling nightmares. All of which lead you to a boss battle that if you manage to beat first time, you are a better player than I am. Let Them Come is incredibly hard in places, constantly replaying the same level just to get enough coins to refill your electricity ammo for your rifle.

As you destroy aliens you fill up your combo meter which when full gives you a random power up, these include a buddy robot that can come in and lend a hand when things are getting tough. Even a coin bonus and double reward bonuses are available. These are amazingly helpful when you are trying to get upgrades.

You also get access to some collectables as you progress through, these include emails and memos that got sent prior to the outbreak of aliens, all the way to new tracks on the boom box allowing you to have your favourite music to kill to.

Let Them Come is pixel art at its best. It has bright colours, detailed environments and lovely lovely blood red claret everywhere! If you enjoy pixel art then you are in for a veritable treat for the eyes. My favourite part of the graphics is the avatar in the bottom left of your screen. As you continue to fire at the aliens the face becomes more distorted with its rage and aggression. Then as you steadily get hit (and you will) it becomes bloodied and eventually expires, sometimes without a face and the brain showing. Its gruesome, but its brilliant.

Your enjoyment of Let Them Come will be spent most of the time listening to the rifle firing. I have to admit that I can’t recollect hearing the soundtrack during the fighting sequences. However this was brilliant as it allowed me to focus on where I was firing and not bopping my head to one of the 80’s inspired musical tracks.

With the boss battles taking their time, and seemingly endless numbers of aliens to take on, you could potentially be playing this game for a long time. Dipping in and out of the game in between playing other games will likely be the way that you start to play this game. However once you get hooked in the “just one more run” routine then you will end up losing hours, just as I did! Let Them Come is an endless amount of fun, with your enjoyment of the game only enhanced by what you put into it. Let Them Come battles it’s way to a Thumb Culture Gold Award.