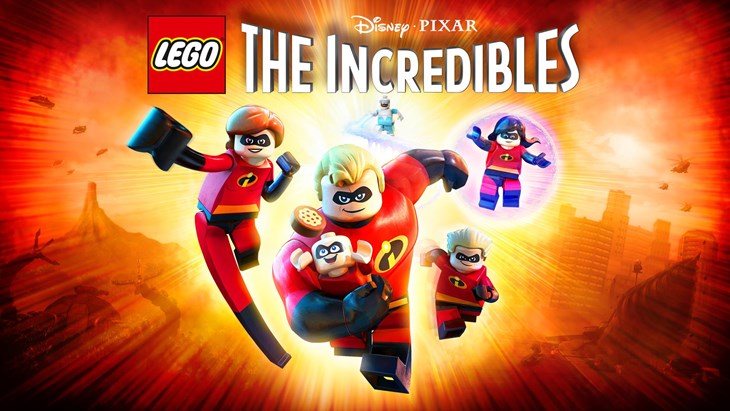 As ever, The Incredibles game follows the very much tried and tested Lego gaming formula comprising of witty dialogues, short dynamic cut scenes and essentially teamwork between characters to solve puzzles and complete the levels.  Here we get to play as The Incredible family, starting off with Mr Incredible and Elastogirl as we are thrown straight into the action onboard a huge tunnelling machine.  Now it is at this point I must say that I won’t be giving away any of the storyline of the game as clearly and historically in the franchise the gameplay loosely follows the story of the new Incredibles 2 movie!  however what ensues gives a great tutorial of how to use the superhero powers of each character as each scenario crops up.  Mr Incredible has a super smash and throw attack, Elastogirl can perform jump attacks as well as stretch herself to form bridges across gaps while Frozone can glide Silver Surfer style about the screen and freeze objects, you get the idea.  Each character also has a power up which is available once the attack bar is full which helps destroy a lot of what is on the screen quickly.

As you play through the first few levels you are joined by the rest of The Incredible cast, namely their children; Dash, Violet and the funny as hell baby Jack-Jack.  If you remember the first Incredible film then you will know what each of their special abilities are and here it is upto you to utilise them to your advantage to help cross toxic puddles, run quickly past obstacles and beat the crap out of a cheeky raccoon.  Jack-Jack is on form with his various morphing abilities such as multiplying, turning into a raging ball of fire and a monster.  I found his character was the funniest while playing as him with his innocent babbling and cooing hiding the carnage that you were creating in the game.  At certain points in each level you are prompted to combine your Incredible powers to construct a giant build.  Where multiple characters are present you must quickly switch between them and spam the relevant button ensuring that the power meter is kept at the top.  It is a bit like juggling saucers on sticks…but a lot easier!

Following in the footsteps of the Marvel and DC Superhero Lego games there is an openworld element to The Incredibles that sees you free roam about in a large city that is split into districts.  Here you can carry out side missions also known as Crime Waves as well as explore and discover hidden items.  Your reward for completing certain levels is the addition of other Pixar characters that have been strangely thrown into the mix.  Whether this is because the superhero world of The Incredibles is quite limited in comparison to the DC World i’m not sure, however I managed to unlock the Finding Nemo area along with Dory who oddly you can play on the land as she comes complete with a water filled bubble.  Other Disney Pixar movies that feature are Toy Story, Wall-E, Monsters Inc, Cars and A Bugs Life.

There are many vehicles that you can leap into and start motoring about the city but one thing the developers have never quite cracked is the handling of them!  Vehicles tend to go from turning slowly to quickly, leaving your car, lorry, digger, etc weaving crazily across the road through hedges, bushes and fences.

Clearly The Incredibles Lego game is aimed at the younger audience but don’t stray too far away when your littluns are playing as some of the puzzles may require your assistance as they are not always as straight forward as you imagine!  Although each obstacle clearly highlights which character is required to complete the task, the sequence of events is not always obvious.  Even my wife and I found ourselves getting stuck every so often!

I have always admired how everything that you see around you in these games has been built out of Lego bricks.  The bright vibrant colours, dynamic Lego builds of usable objects and the characters all take on a charm that is only associated with the Lego franchise and makes it easily recognisable.  The cutscenes are fun, imaginative and usually contain some kind of comedic act in the background that even make adults laugh if you enjoy a bit of slapstick comedy.

The camera angles can be a total pain at times with the rotation of it getting stuck while following a character or randomly glitching such as flashing between the normal view and zooming in however anybody that is used to the Lego games will be sadly expecting this.  It doesn’t happen often but can become irritating, especially if you are already getting frustrated with a puzzle or a boss that you are stuck on.

The Incredibles features dialogue straight from the new movie which keeps the game flowing however I would strongly advise that you see the film first before playing the game as the story will make a lot more sense!  The soundtrack includes the ’60s style superhero music, again true to The Incredibles movie along with bright and clear sound effects.  Call me mad but there is something lovely about the rapid “click click click” sound when you construct a build!

The Incredibles is purely an offline affair and perfect for all the family.  Each level is honed in to represent a part of the film and has a lot of replayability as there is always the need in Lego games to go back in “free play” mode where you can select from a pool of unlocked characters that you didn’t have at the time of originally playing in order to discover and collect items that you couldn’t earlier.

With the many studs to collect, special bricks to find, characters to unlock and mini kits to piece together, The Incredibles will keep you hooked long after the story has been completed, especially when you see that your progression is only a shameful 30% and you have many trophies to achieve!

So is the Lego formula getting tired?  Well all the time that family friendly movies are being churned out, there will always be the option of a Lego game based on it.  In the past I have loved playing their take on Jurassic Park, Harry Potter and Indiana Jones and it has not got boring yet despite some of the puzzles being very similar across the games.  I think the fact that you are following a film storyline which includes authentic dialogue (Ok some of the early Lego games didn’t) and there are recreated scenes albeit in a Lego form lets you look forward to playing as you feel like you are in the film and that makes it appealing and exciting, so long as you enjoyed the film!

I wish that by now in the Lego gaming franchise that the vehicle handling and dodgy camera views had been addressed therefore I give The Incredibles a Silver Thumb Culture award!

Disclaimer: A physical copy of the game was received to complete this review. No raccoons were really hurt in the process.