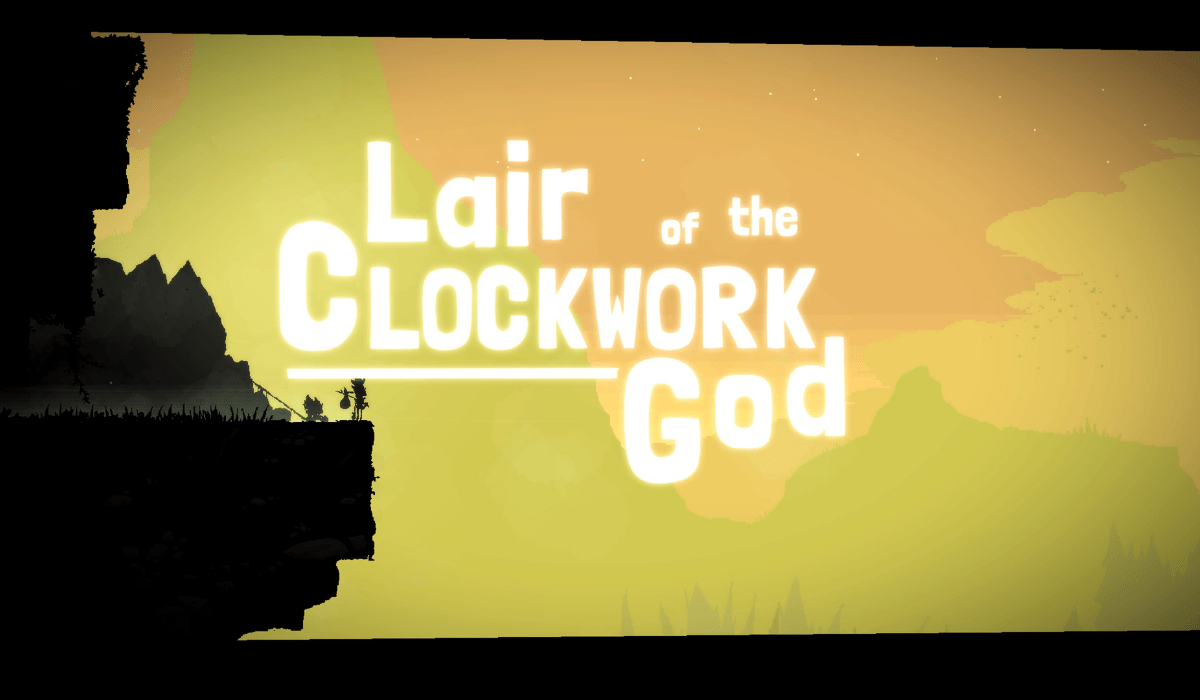 Lair of the Clockwork God is brought to you by BAFTA-winning indie developer Size Five Games. Initially released on Steam in February 2020 and now available on PS4. It offers a never before seen mix of mechanics. On one hand, it’s a point and click puzzle adventure in the vein of LucasArts classics such as Grim Fandango and Day of the Tentacle. On the other hand, it’s an indie darling platformer complete with double jumping and Naruto running. The blend of gameplay approaches itself creates new ways to pose, and solve puzzles. You’ll play as both Dan and Ben and will find yourself switching between the 2 frequently in order to utilise their skill sets. 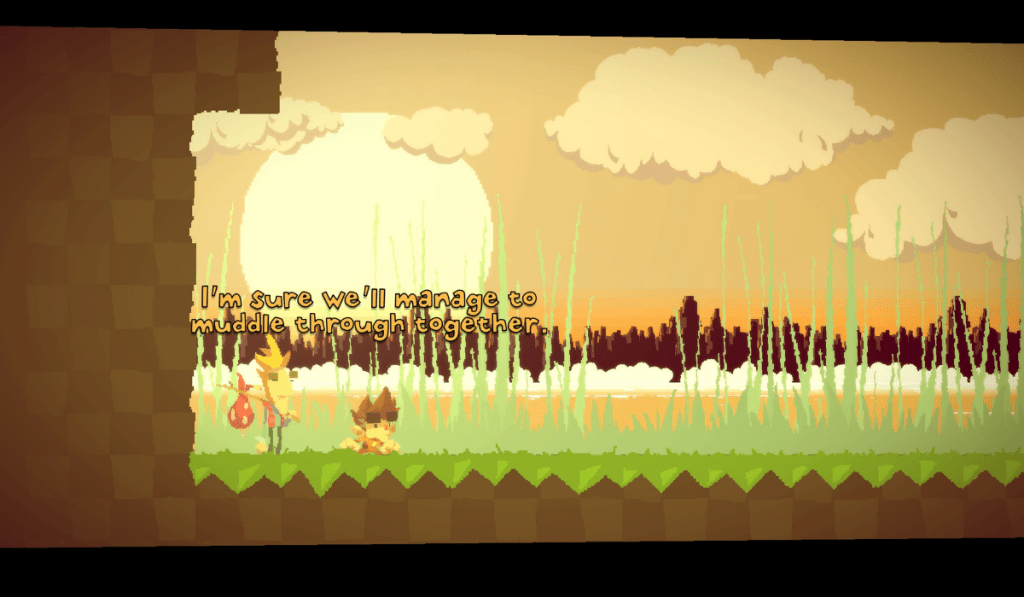 You’ll have a blast as Dan and Ben muddle through old school adventure puzzles and platforming sections. Together you’ll need to teach emotions to an artificially intelligent computer, in order to stop all the apocalypses happening at once.

Does Lair of the Clockwork God click with you?

Point and Click with platforming is an interesting mix of genres. If you’ve played the game, be sure to leave a comment below. We’d love to hear which other unique combinations you’d like to see explored.

The humour starts even before the game does. A series of splash screens greet you and you’ll soon realise that they don’t stop. If you appreciate a good pun, it’s worth sitting through the first dozen or so logos before they start to be procedurally generated. With the tone set, you land in the main menu. From here you can start or load a game, change your settings, visit the ‘store’ or play through a second game that is included for free. 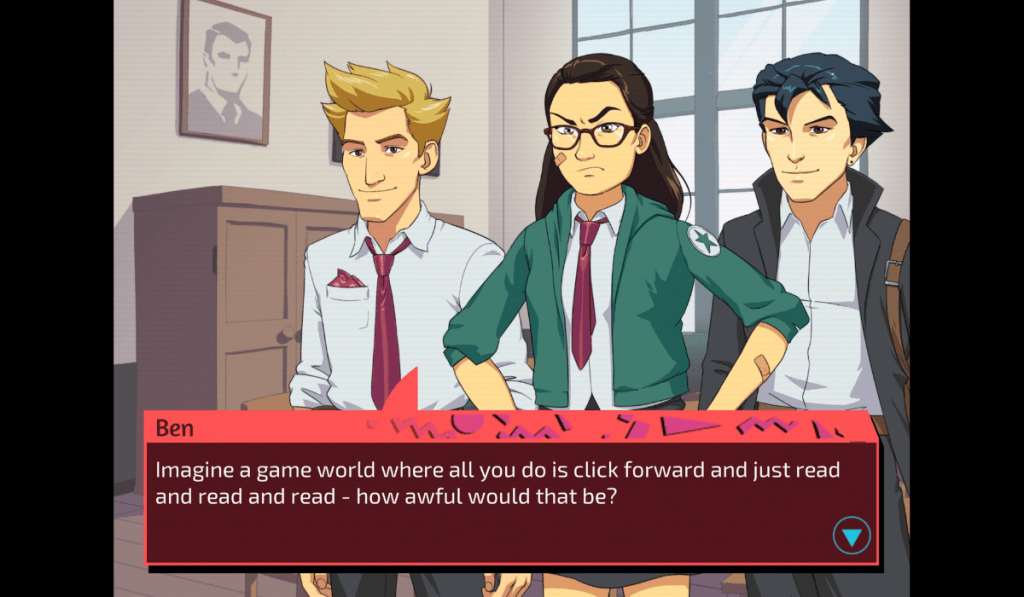 The free game, The Devil’s Kiss, is a visual novel (VN) that bills itself as telling the story of how Dan and Ben met. Following the comedy style of the main game, The Devil’s Kiss uses self-aware humour to poke fun at the VN genre. Some of the jokes contained within are called back to in Lair of the Clockwork God so it’s worth spending the 15 or so minutes it takes to complete it before you tackle the main event.

The dialogue in both games is superb. There are many moments where I genuinely laughed aloud to myself. Some of the jokes are dropped in so quick that if you blink, you’ll miss them while others are a little more obvious. Whether they are lamenting about the very mechanics needed to achieve their goals or making sly pops at real-world events, there’s a joke for everyone here.

Adventuring with Dan and Ben

Lair of the Clockwork God starts with a tutorial stage where Ben and Dan are on a quest to retrieve a flower with the power to cure cancer. Ben is the adventurer. He is able to look at points of interest, talk to characters, pick up (see also: steal) and/or use items and craft new ones. Ben is responsible for solving puzzles and supplying upgrades to Dan. Dan is the platformer. It’s up to him to make his way around the environments and unlock new areas to explore. Dan refuses to collect or use items, Ben refuses to jump. To progress, you will need to use both characters in tandem to overcome obstacles of the mind and body. 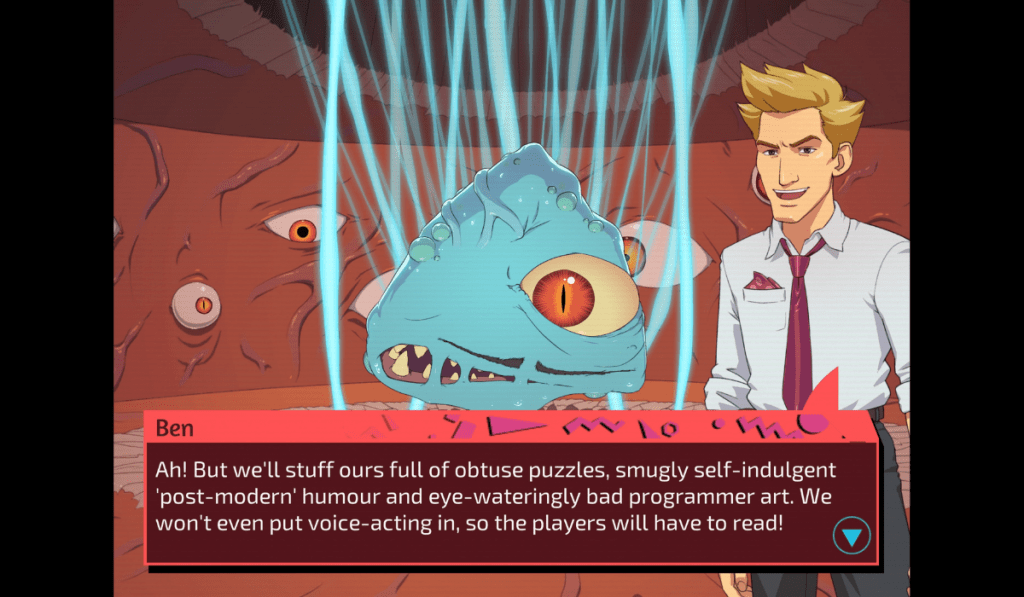 You will need to pay attention to what characters say to solve Ben’s puzzles. There are subtle hints in the conversations that will help you along the way. The game is forgiving though and if you need a hint, talking with Dan will often remind you of current objectives or give you a push towards the solution. You will often need to combine multiple items to get to a solution.

Early on in the game, Ben is ‘killed’ in a simulation. Upon arriving in platformer limbo it only took 1 conversation to figure out what the puzzle was and what the solution would probably be. One or 2 more interactions later and I understood the solution and was able to start working towards it.

Dan’s platforming challenges start off easy, but they get tricky quite fast. You’ll need to get used to controlling him whilst battling various gravitational direction changes. You’ll also be avoiding pitfalls and dangers, which will require well-timed jumps and movement. You can use the right analogue stick to move the camera view in order to find safe platforms that are just out of sight. If you do fall victim to any of the hazards, checkpoints are liberally scattered throughout the levels and respawning is practically instant. 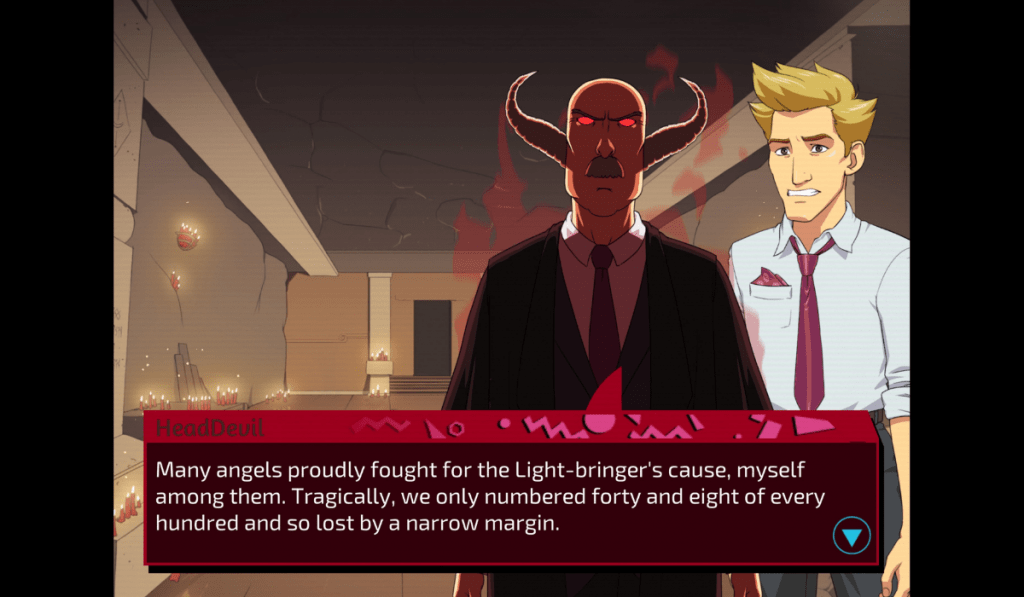 There are 13 accessibility settings found in the menu under ‘Game > Accessibility’. They cover text options like toggling a Dyslexic-friendly font all the way to vibration and screen shaking. It’s great to see that Size Five Games has taken the time and care to include these. I recommend turning off the speech auto advancement so that you have time to take in conversations and clues. The text doesn’t move too quickly with this option enabled, but I found myself missing dialogue when distracted after a loading screen.

Lair of the Clockwork God has a 2D, side-scrolling perspective.  The pixel art style has a hand-drawn feel to it as opposed to a more retro 8-bit or 16-bit look. It’s a unique style that keeps its roots from previous Dan and Ben games but has certainly evolved and improved. 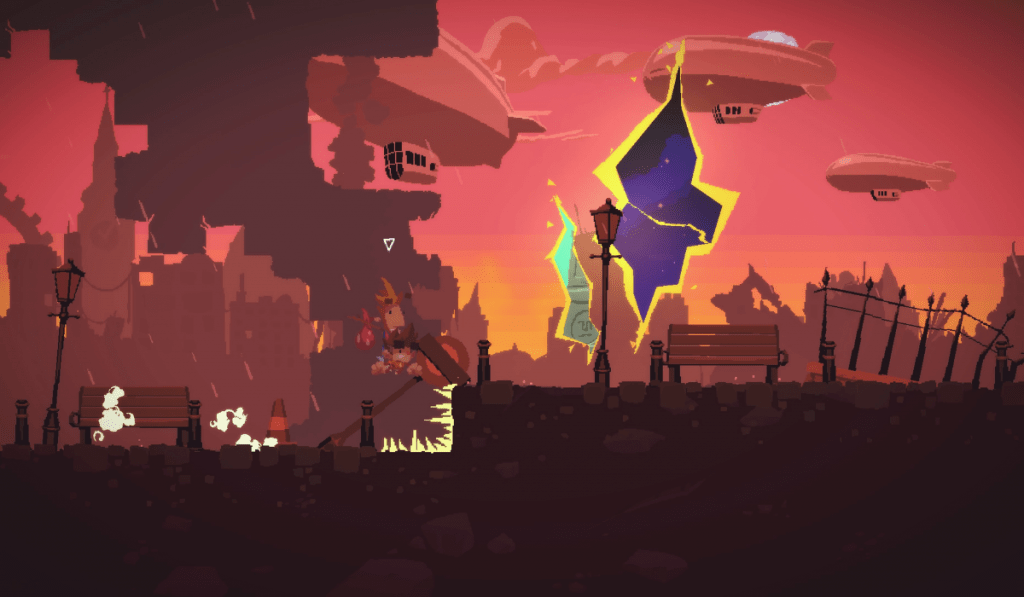 The soundtrack is glorious. More than once, a section of the music would remind me of a Final Fantasy theme. The piano piece around the start of the 4th area was particularly beautiful. There are no voice-overs for speech in the game but characters do make sounds when they talk.

The main game will take between 10-15 hours to complete. This will of course all depend on how well you do with solving the puzzles. Aside from that, the Lair of the Clockwork God has in-game achievements for you to track down and complete. There is a chapter select mode for completionists to assist with post-game cleanup.

I thoroughly enjoyed my time with Lair of the Clockwork God. Having previously also played Behold the Kickmen, I will definitely dig into their other games…once my backlog is under better control.

I award Lair of the Clockwork God a Thumb Culture Platinum Award. 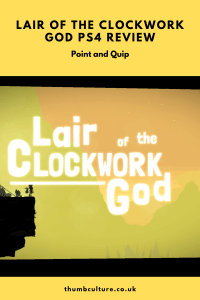