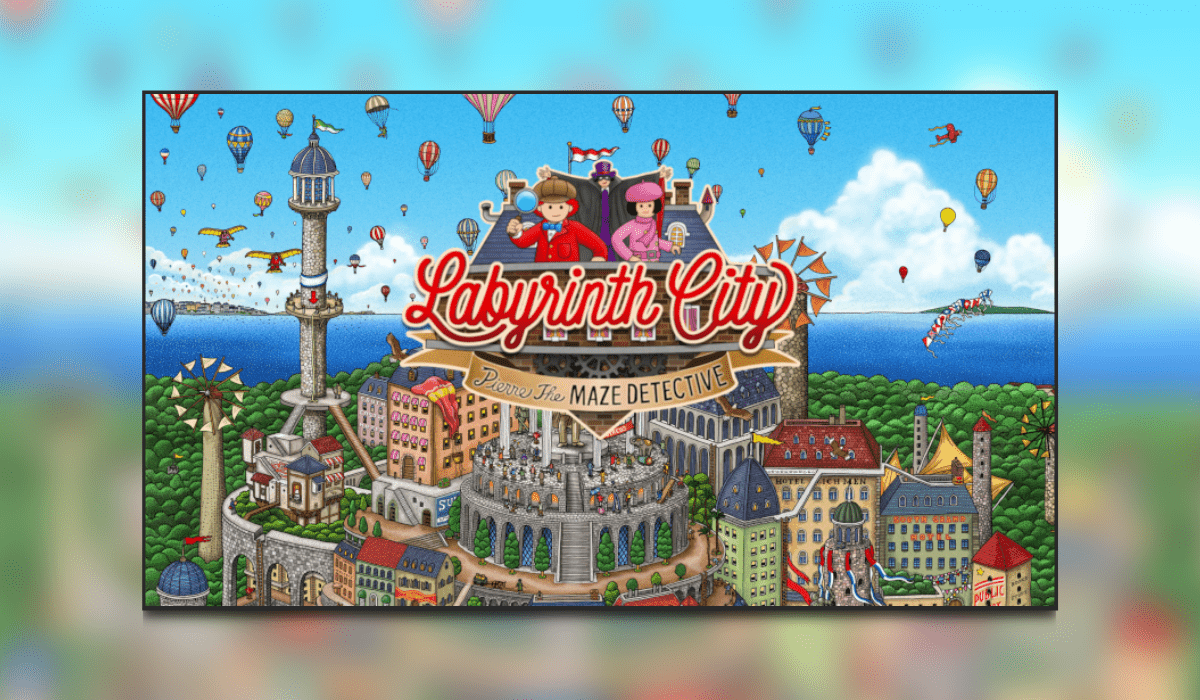 Developed by Darjeeling and Published by Pixmain comes Labyrinth City: Pierre the Maze Detective. Released on the Nintendo Switch on the 21st of June. Based on the best-selling book. Labyrinth City: Pierre the Maze Detective is a 2D puzzle video game in which you play Pierre, an eminent Maze detective. You will have to find your way through the immense labyrinths of Opera City to catch Mr. X, an infamous thief who stole the Maze Stone. ​

Take a trip through a fantastic world of amazing cities, tree-top towns, and haunted houses. During your adventure, you can explore each level to find all the collectables, solve the mini-games and talk to all the characters to discover their story. Designed to be played by the whole family, trace your way through each maze, spot the clues and solve the extra mystery challenges along the way. Let’s hope we don’t take a wrong turn in this Labyrinth City: Pierre the Maze Detective review.

Now I’m going to come out straight away and say that I am absolutely useless at puzzle games. I just have no patience for them whatsoever but there was something about this that drew me in. So let’s find out if we get lost, shall we? As usual, if you enjoyed this review then why not check out my latest one here. You can also check out what the rest of the Thumb Culture team are up to on our social media.

The premise of Labyrinth City: Pierre the Maze Detective is very simple. Multiple maze levels with the object of finding clues while navigating a said maze. Yet this game does it with a certain charm and charisma that you just can’t ignore. As I said before. I just don’t have the patience and lose interest very quickly. But wanting to find clues and interact with the quirky NPCs just kept me playing. Each maze is perfectly planned out. It reminds me very much of the Where’s Wally books as the artwork is just the same.

The gameplay itself is simple as it’s made for all the family to enjoy and get involved in. There are a total of 10 mazes with each maze getting bigger and harder to navigate. Each level can have 5 or 6 NPCs that you navigate around the maze to get to in order to get to your next clue. There are also collectables that you can collect in each level just to give you that extra bit of gameplay and to unravel some more of the story. But the appeal of the game has to be the artwork and the design. It is just so wonderful that you would think it’s easy to get lost. But while some levels can be quite daunting. The pathways are highlighted so you always know which path to take.

The graphics are brilliant and charming with amazing artwork that literally comes straight from a book. Each maze is beautifully drawn and put straight to the screen and the animations of the surroundings and the NPCs are great. From scenic scenes to spooky haunted houses. They are just a joy to look at. The music can get a little tiresome after a while but it’s no major deal.

The only little downfall I can bring to the game is that it is extremely short. A full playthrough can take just 4 hours. If you wish to go back and play every level to collect all the collectables then it may take about 6 hours. It is such a shame because once you really dig your nails into it. It isn’t long before the last maze is just around the corner and you’ve finished the game. I just think it needed an extra mode just to give that extra gameplay but sadly it isn’t there.

My final thought is that Labyrinth City: Pierre the Maze Detective is a game made purely for the Nintendo Switch as it’s great for a road trip or laying in bed passing a few hours away. The light-hearted gameplay and addictive mazes are perfect for the whole family to get involved in. Even though I completed the game twice. It will stay installed on my Switch as it’s just one of the feel-good games that’s great to pass some time away. So it’s with great pleasure that I give Labyrinth City: Pierre the Maze Detective the Thumb Culture Gold Award.