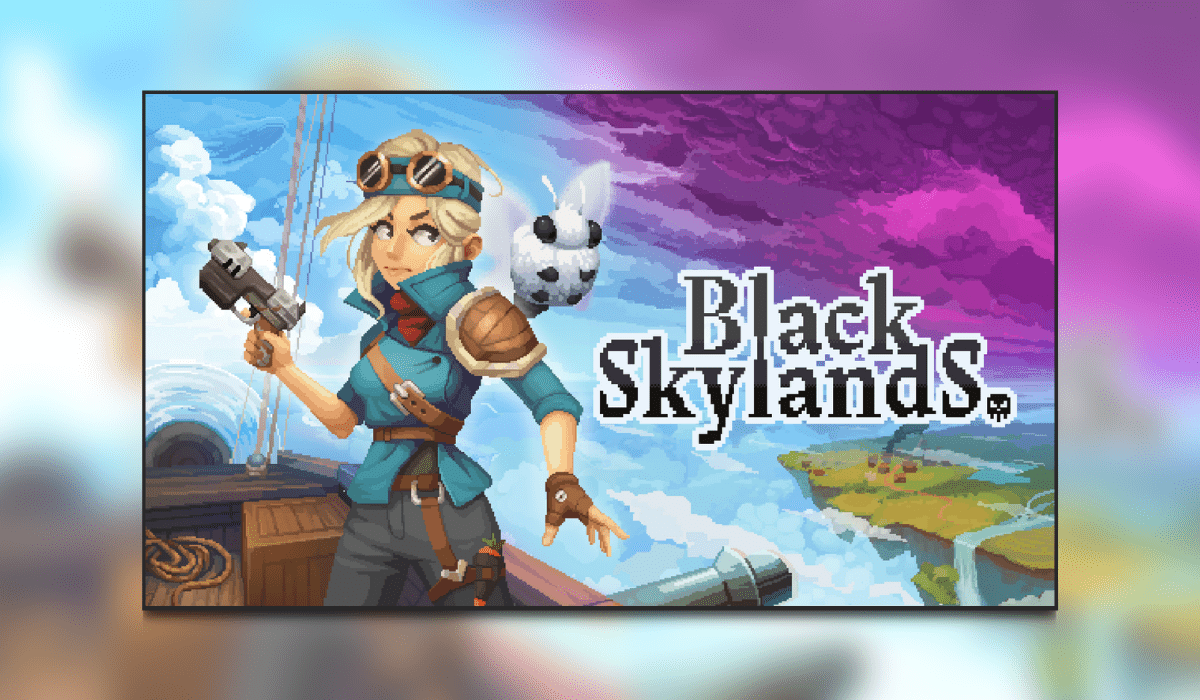 Black Skylands, developed by Hungry Couch Games and published by TinyBuild. It is a title that will take you back with its top-down aspect along with its pixel-art graphics. Black Skylands is available now in Early Access on Steam, enabling you to play as it is getting developed and supports keyboard and controller.

Topdown pixelated gaming that will take you back!

I had no idea what to expect from Black Skylands, I am not a massive fan of JRPG and from the teaser trailer, it looked like it could fall that way. I was pleasantly surprised when I saw the gameplay trailer. It was at that point I knew I had to check it out for myself.

You play as Eva, she and her family reside on the Fathership. Her father is trying to keep the Fathership and its villagers safe, whilst at the same time trying to find out what is happening and how they can restore peace. One day he returns with a monster, thinking everything would be safe, and lets it out of the discovery crate. The monster attacks and shots are fired, one of the Falcons (another faction) is injured in the process as he is caught in the crossfire. The Falcon’s eventually retaliate causing mass destruction to the Fathership and killing many within the village. This is where Eva’s adventures really start.

You jump into the game, and there is a tutorial that teaches you the basics, from flying to weaponry. From here you learn just about everything you will need to know. A typical mission would be jumping in your craft, navigating your way across the map to the news lands until you reach a destination. At the new destination, there will be a lot of resource collecting. Amongst this, there will be battles to defeat the Falcons. On defeating them, you can then reclaim the village, which in turn allows you to upgrade Eva’s abilities.

Not only will you be battling in the villages across the map, but you will also be battling in the sky. Your craft starts off fairly basic with 2 cannons but you can soon upgrade it into a titan. The aerial battles are just as important as the land battles, this is another way you can gather some great resources. Via an in-game tablet, you can also upgrade Eva. You can upgrade Eva directly, however, you can also many items to her that improve various attributes.

There is also an in-game ability to upgrade any weapons that you might have. Mod boxes are scattered around the map, these are required in order to find the upgrades. These unlock anything from sights to rounds and barrels. These upgrades you do not want to miss out on, so my advice is to keep an eye out for mod Boxes.

The Fathership is your home. Here you will be rebuilding the future and has an element of a sim built-in. You will be clearing the Fathership of debris, and making many repairs across it. Not only that, but you will also be building everything from armories to farms. All of these new buildings will also assist in your progress within the game bringing you new items as you upgrade the Fathership.

The graphics are the first thing that really drew me into Black Skylands. The way pixel art has been created is just stunning and very smooth when playing. Some pixel art indie titles can sometimes be a bit harsh. In turn, this makes playing the titles for any long period of time extremely painful.

Black Skylands is currently in Early Access, this can sometimes usually mean you come across bugs or glitches within a title. However, the developers have done a really good job, the game feels polished and an end product. There were no issues whilst playing which is great to see, especially at this stage.

Black Skylands is one of the titles that depending on the type of gamer you are, depends on how much you will spend on it. For example, if you are a run and gunner, you can fly through the game doing the missions and not really focus too much on the upgrades unless you need them.

However, if you are the completionist, it might be that you spend time between missions exploring and unlocking the map. You also might spend that time collecting resources so when upgrading later on in the game you have what you need already. I can safely say no matter what type of gamer you are, you have hours of fun with your first playthrough.

I haven’t played that many solo titles this year and really enjoyed them. Mainly due to enjoying time socialising on games with friends. However, Black Skylands dragged me in due to its captivating storyline and its gameplay. The mechanics of the game along with the assets took me back to the original PlayStation days. I thoroughly enjoyed my time jetting around Black Skylands, and saving the villagers from the terrible Falcons! As the title is still in early access, I imagine there will be many changes to come. So I will be keeping a close eye on what the devs bring to Black Skylands next.