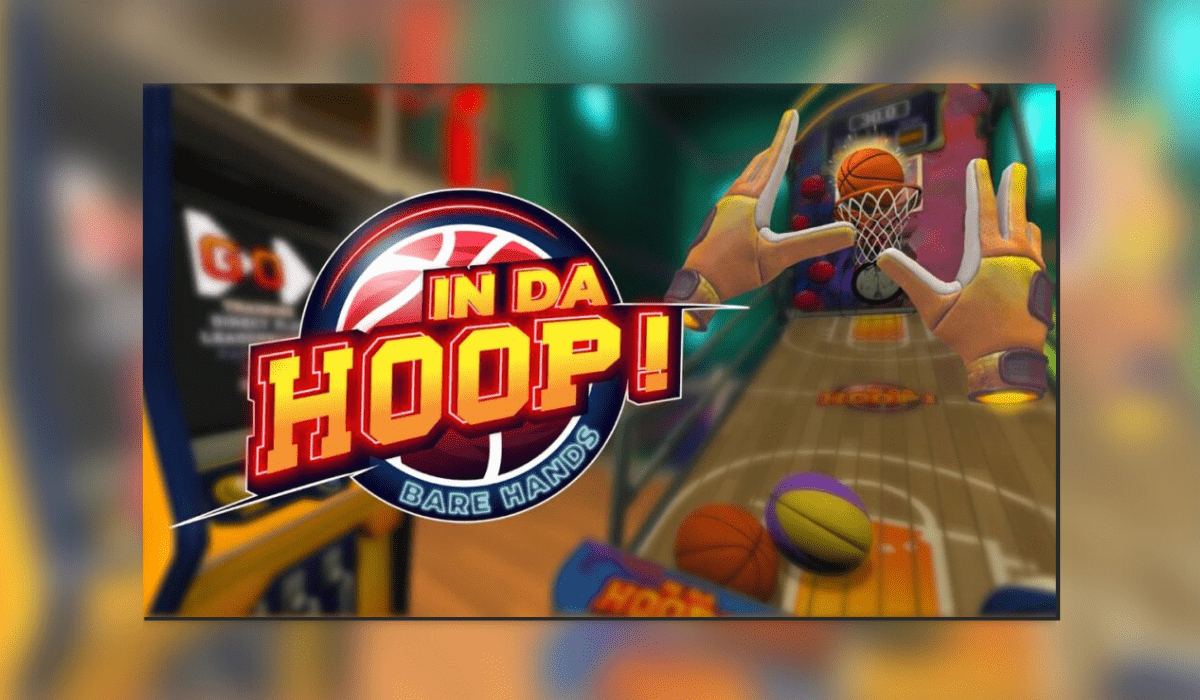 Missed those 90s arcade basketball cabinets? Got a fancy Quest 2? Well, now you can relive those experiences with In Da Hoop! Currently released on the App Labs store on Oculus, developed and published by Realcast. In Da Hoop! Brings a nostalgic nod to the old school basketball cabinets that you may have spent many a pound on in the past.

Has anyone got a spare pound?

If you enjoy this review, maybe consider checking out our social media where we keep you up to date with the latest reviews and news.

Starting up In Da Hoop! You start the game and are on a balcony overlooking a neatly rendered arcade. Sitting on its own is a single arcade cabinet. It’s not a basketball hoop by any means, but what it is is your method of controlling the gameplay.

Starting you off on a number of tutorial levels, In Da Hoop! Developing your skills from placing large dice on top of one another, to holding a glass ball without dropping it. It’s a neat way to get the game mechanics into your memory because after all, you aren’t really throwing a ball into a hoop.

Once you progress further through the tutorial section you unlock the different levels, including Quick Play, allowing you to take on the worldwide leaderboards.

Don’t worry though, if you are struggling with the finger tracking controls you can opt to use the touch controllers, which definitely makes things a little bit easier. Although less rewarding.

Once the basketball hoops make an appearance, you really do get a great sense of what exactly the developers have done here. Having played basketball for a number of years in my youth, I was able to quickly retry the techniques learnt for taking free throws and replicate them to varying degrees of success in the game. However, I did get to number 1 in the world in one of the levels.

Initially, I was a bit let down by the lack of ‘stuff’ on this mezzanine of fun. The game is stunning, the area that you play in is clean and well detailed. If you have a big enough play area you can walk right to the edge of the balcony and look over at the cabinets down below.

The neon signs give a great ambience when shooting hoops. I never lost the immersion due to any graphical issues.

Audio-wise, you get the standard over the top sound effects that you would expect from a games arcade. Nothing at all seems out of place.

At its heart, it is a simple arcade-style game. Digging a little bit deeper, and with the coming soon addition of online play you could quite easily lose hours trying to best your friends on their leaderboards. It’s this element that will keep you coming back for more and more. Using hand tracking gives a challenge to the game that leaves you trying again and again. Plus with each tutorial level having 3 stars available, you will keep trying and trying to get that score even higher.

In Da Hoop! is a revolution of what is possible with the Quest 2 platform. Finger tracking and the environment gave me hours of enjoyment. Although my right shoulder definitely was a bit sore after all those hoops.