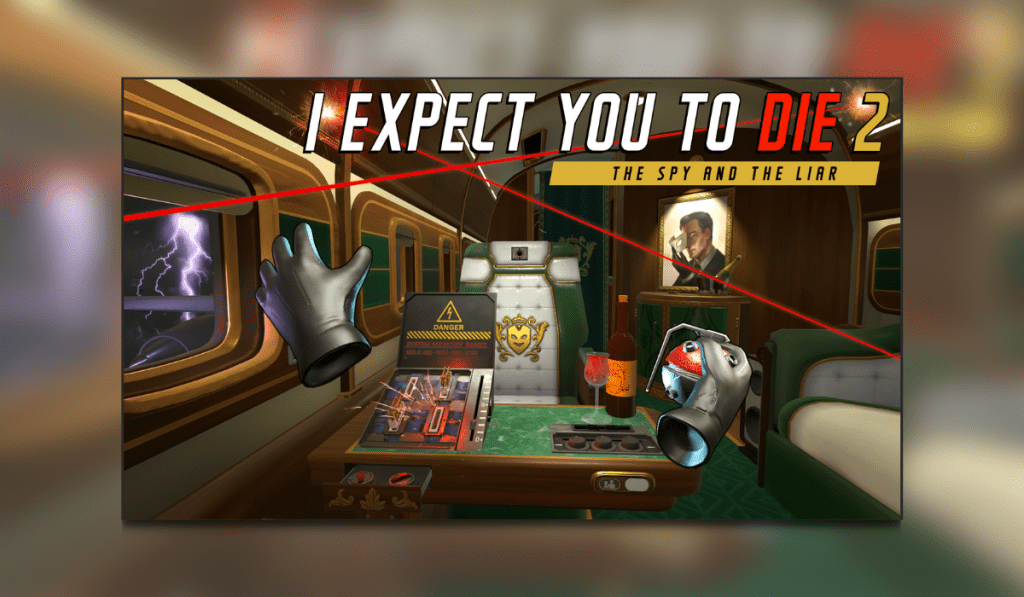 I graduated spy school became an elite super-spy and now I’m ready for espionage, explosives, and gadgets galore. The popular escape-the-room VR franchise is back with more ingenious puzzles, cunning villains, and dangerous locales. Developed and published by Schell Games and released 24th Aug 2021. I Expect You To Die 2 gives a second chance to play a world-famous spy and is available across all Virtual Reality headsets.

Turns out I’m more of a Johnny English than a James Bond.

If you’re a fan of VR titles why not check out one of my other reviews such as SURV1V3 here.

While the storyline carries over from the original game I Expect You To Die, previous knowledge is not required. You start with a small tutorial on how to use the controls and the telekinesis powers that you utilize throughout. After this brief demonstration, you are then taken into your spy van where you load to between missions.

Missions are played by loading a small cartridge into the player, this then plays an introduction and gives you some snippets of information. After your mission briefing, you load in and things quickly begin to happen. You very quickly get introduced to John Juniper who is voiced by famed actor Wil Wheaton.

There are both visual and also audio cues that keep you moving in the right direction throughout however it does require you to search and look for the next steps yourself as well. Be aware though, for every right action, you can take there are a few wrong ones available as well. From poison cakes and exploding cigars to hand grenades and sneaky traps, You will die multiple times during missions. Don’t worry though death is only the beginning, the beginning of the mission that is.

This is a seated experience and as such, it is very comfortable to play this game for those with less experience of VR. All controls are done either by reaching out and grabbing or by your telekinesis powers.  The controls are nice and simple and work extremely well for the style of the game. The wit and humour used throughout are amazing. They really bring this game and its characters to life. From multiple deaths to glorious victory when your winning, you really are winning in this game. There is plenty of opportunities to stop and grab a bite to eat and you can even celebrate each successful mission with a glass of champagne!

Graphically the game looks amazing. The opening scene is one of the best I’ve ever watched. I played mine on Quest 2 and had bright beautiful graphics with no tearing or any other issues. It runs smoothly and is very easy to spend long play sessions in without any fatigue. The audio in-game has been done perfectly. Voice lines are easy to hear and focus on while interacting with objects gives fantastic audio cues. The sound effects are all very well done and sound as you would expect the real-life equivalents to sound. The different volume levels give a real depth to the levels and voice lines appear to have a priority meaning you don’t miss anything being said.

While there are 6 missions to work your way through, there is added replayability in pushing for better times. There are also hidden collectables throughout each level that you can go back and pick up if you missed them on your first playthrough. For PCVR users there are 19 Steam achievements to collect for the completionists. Between the initial playthroughs and the speed runs there is definitely a level of replayability although somewhat limited compared to other game types.

This is by far my favourite escape room styled VR game. The humour used throughout the game keeps you smiling even through various deaths. You need no prior knowledge of the franchise however both games are worth picking up if you haven’t already. It is comfortable to play for all experience levels and leaves you frantically searching for the next clue. I highly recommend this game Therefore I award I Expect You To Die 2 a Thumb Culture Platinum Award.