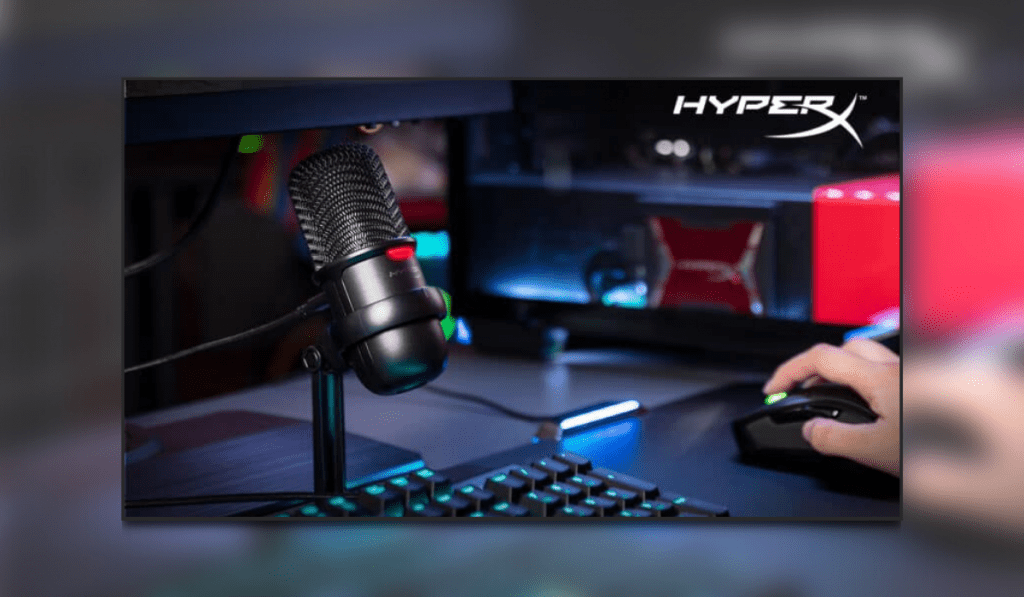 HyperX has been in the peripheral game for a while now, products ranging from its Cloud headsets to its Quadcast microphones (previously reviewed here). Now in post-covid / various lockdown times everyone’s Gran, Aunt and a long lost cousin have a need for a microphone that involves no fuss at all. This is where the Plug-N-Play HyperX Solocast hits the spot.

From the outset, it’s obvious what you are getting in the box, and the box imagery couldn’t be more perfect. The Hyper X Solocast comes set up in its cradle and ready to rock. Simply plug the provided 2m USB cable in and away you go.

It comes in a matt black finish, with a nice glowing red light to show you it is active. This is a design feature which is now common across the Hyper X microphone range.

The cradle itself holds the mic vertically but this can be adjusted up to an angle of around 45 degrees, depending on where you position it on your desk. It also comes with a 3/8″ -5/8″ mount threading (more on that later)

I particularly like the quick mute tap button on the top, the red light flashings to know you are muted. If you are using this microphone on Zoom, Teams or even Discord they have no idea you are muted. This is very handy if you quickly want to say something to someone off-screen.

The HyperX Solocast supports Microsoft, Mac and Playstation4 platforms. I did attempt to connect to a Xbox Series X and although it showed it as a device, that was all it was good for.

It is at this point you should note that if you use a Mac and leave the microphone on mute, at some point it will unmute itself without you doing so (this may be to do with how my Mac deals with USB power, but it hasn’t happened when using it via my Windows laptop)

The HyperX Solocast has a cardioid pickup pattern, meaning it picks up sound in front and to the side of it. With no functionality to adjust the threshold it, unfortunately, picks up any keyboard/gamepad sounds very well, so expect to be hitting that mute button whilst furiously typing during an online meeting!

Feedback on the audio quality from both the Thumb Culture team and my day to day work has been positive. Everyone said it was a massive improvement over the built-in laptop microphones and headset mics.

The HyperX Solocast is a great introduction to the world of standalone microphones. With its easy to use Plug-n-Play style and barebones interface, you really can’t go wrong at the price point. As an audiophile, the sound quality isn’t the greatest but we aren’t here recording this year No.1 hit. In this space, it goes directly up against the Blue Snowball ICE, so it would be interesting to see the 2 side by side, as Blue have a deep history in microphone technology. I, therefore, award the HyperX Solocast a Thumb Culture Gold Award.