Headsets, I don’t know about you, however, finding one that is decent can be difficult to do as there are so many to choose from!  In the past I have been able to test and review a few different headsets from various manufacturers, each have had their own pros and cons.  This is my first foray into the world of HyperX so I did not know what to expect when the HyperX Cloud Flight S wireless gaming headset arrived on my desk.

Come with me as I put this headset through its paces and give you my verdict to whether it is worth your hard-earned cash!

Straight out of the HyperX emblazoned cardboard box you get one wireless headset, a detachable boom mic, a 2m charging lead and a USB 2.4GHz receiver.  The Cloud Flight S features QI charging should you happen to have a QI dock around.

The aluminium frame felt sturdy as I picked up the 310g headset to take a look at the features which surprisingly do not include for a wired audio connection, somewhat limiting the usage with devices other than a PC and a PlayStation.  It is worth noting that there is a CloudX Flight specifically made for XBox One with slightly fewer features than this particular model.

The HyperX Cloud Flight S is fairly easy to use with controls situated on both of the 90 degree rotating earcups. There you will find 4 customisable onboard controls on the left earcup that can be configured when using it with a PC using the HyperX Ngenuity software.  The default settings allow for mic mute, mic volume as well as balance buttons between game and chat.  The on/off button, 7.1 virtual surround sound and charging port are also located on the left earcup leaving just a volume dial on the right earcup.  The mic is detachable and features a red illumination when it is muted, so long as you can strain your eyeball down far enough to catch a glimpse of it.

Sitting on your head the HyperX Cloud Flight S feels very comfortable and the “extra-plush memory foam with breathable leatherette” appear to do their job with no nasty ear sweating occurring during long sessions of wearing them.  The headset rests gently and does not push down like some heavier headsets have done in the past.  One complaint I would have is that although the headset has been looked after for the duration that I have had them to test, there are noticeable tears inside the cups where the soft leatherette material meets the foam of the speaker exposing the red material inside.  I am unsure if I have just been unlucky or if this a general issue with them.

I have tested the HyperX Cloud Flight S on both PC and Playstation and it has performed very well.  The wireless connectivity is certainly a bonus as it does allow you to wander off between rounds to the kitchen or toilet (remember to mute the mic!) while keeping up with the chat/banter.  I found that I could walk around 8m away from the USB receiver and through 2 stud walls before the signal starting to get interrupted.

The noise-cancelling mic is very good and has been especially useful during this time of working from home.  I have sat through countless online Teams meetings using this headset while littlun has had his cartoons playing on the TV in the same room.  After each meeting, I asked how clear the mic was and whether anyone could hear any background noise and the answer was a resounding “No.”  Either they were being really polite or they loved listening to back to back Paw Patrol episodes.

Through the Ngenuity software you can turn on mic monitoring, a really handy feature that I missed on my previous headsets and has since stopped me getting told off by the other half when gaming late at night.  The 7.1 surround sound feature is ok when you can tell that it is doing something.  It does feature an “auto-optimisation” button that configures when playing certain FPS games such as Call of Duty Modern Warfare and Rainbow Six Seige.  I certainly could hear better clarity in footsteps when it was on.

Getting to the sound output, the bass is really good on the HyperX Cloud Flight S with a noticeable seismic rumble at 20Hz when testing the headset using an audio checking platform.  I am happy to report that it passed the bass shaker frequency test without any buzz or rattle occurring from the earcups.  Phew! As that one has killed a headset before!

Marching on through the tests, the trebles are crystal clear and within its range with great reproduction.  The driver matching test checks to see if the sound stayed dead in the centre when playing a sound equally from both speakers, again the headset performed well.  When it came to the binaural test it was truly immersive.  The test features playback of somebody knocking on 2 wooden doors, one on your right side and the other from the left.  The realism was excitingly profound and sounded as if somebody was banging on a door next to me.

To summarise, the HyperX Cloud Flight S is bright and punchy when it needs to be.  The wireless connectivity works very well and having a detachable noise-cancelling mic is convenient, to say the least.  The battery, touted at 30 hours life, is spot on and it was refreshing to not be having to find the charging lead mid-gaming session.

The negatives I discovered was that the volume seemed to be a little low at times with no further adjustment available, the earcups have both seemed to of suffered tiny tears around the inside for some reason and finally, there was the matter of not being able to connect the headset using an audio lead, something I would have found handy when using the Nintendo Switch Lite or even my phone. 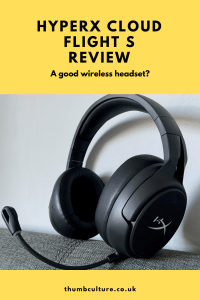