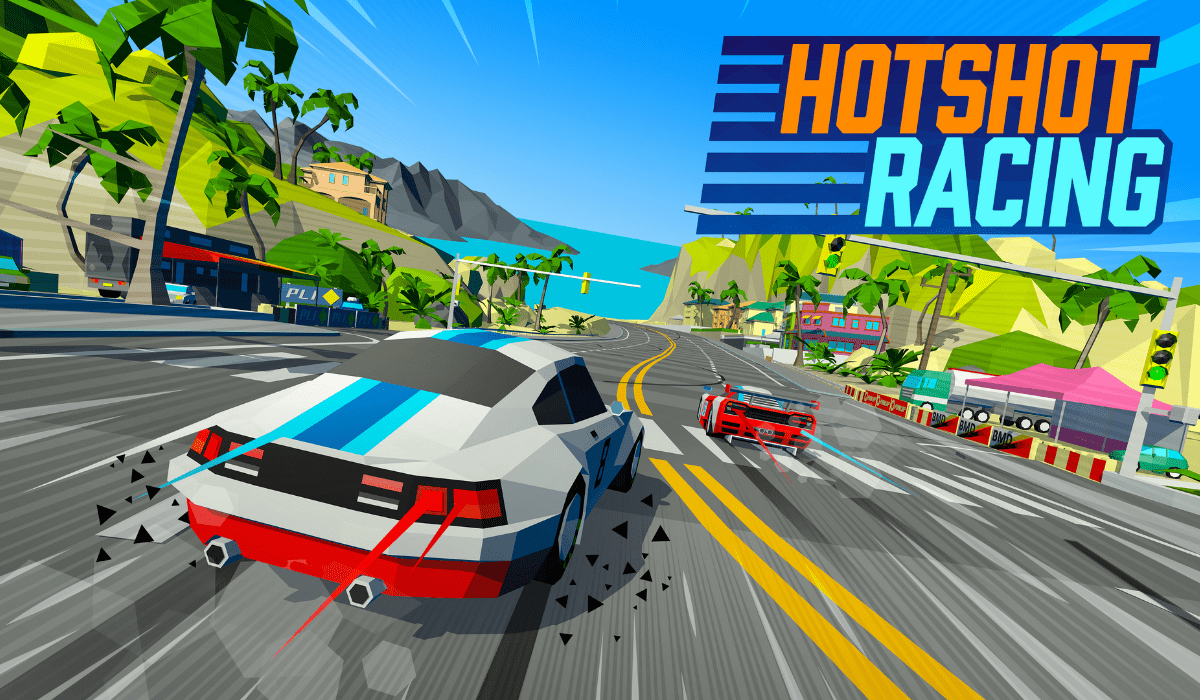 Somebody hit the turbo button on the indie scene a few years ago now and kicked it into high gear.  It has flourished wheel to wheel along with retro gaming, so naturally, new retro-inspired games are a big thing.  Hotshot Racing is a nostalgic love letter to the 90s arcade racing games.  Developed by Lucky Mountain Games and Sumo Digital, who have a fine racing pedigree including Outrun 2, TOCA 3, DiRT 2, F1 2011, and Forza Horizon 2 to name a few.  Published by Curve Digital who specialise in indie games, Hotshot Racing is a very British affair and will be power sliding onto consoles and PC on September 10th.  Now its time to reminisce about skipping school to go to the arcade and pumping 50p coins into Daytona USA.

Disclaimer: Thumb Culture does not in any way condone skipping school – stay in school kids!

The Grand Prix Mode is where you will be spending most of your offline playtime.  Within this mode, there are 4 cups to take part in. Each of these cups has its own setting; Coast, Desert, Jungle and Mountain.  Choose your cup and choose your difficulty setting from Normal, Hard and Expert.  These settings generally change how aggressive the AI is and their speed.  You then have a choice of 8 characters who offer their own comical quips in the race and a delightful little scene after you win a cup.

You’ve chosen your cup, your difficulty and your character, now its time to choose your vehicle.  Each of the 8 characters has 4 vehicles to choose from with their strengths.  Choose to have a more balanced car or one that focuses more on speed, acceleration or drift.  So, 16 tracks, 3 difficulties, 8 characters and 32 cars – its time to GO GO GO!

To achieve victory on Hotshot Racing you are going to have to drift, slipstream, slam and boost your way to the finish line.  The controls are simple enough but you will have to master your car and you will be power sliding with ease in no time.  The courses are designed in such a way that you have ample opportunity to fill up your boost chambers by drifting or slipstreaming.  You are going to have to be fast and aggressive if you want that win! The simplicity of the controls allows for a smooth and precise driving experience.  In Hotshot Racing, using other cars as a brake may be a necessary evil!

With an emphasis on speed and corner negotiation, this is nothing but pure fun!  It does feel like there is a bit of rubberbanding going on at times, especially when you are in 1st place, but for me that only heightens the excitement as you approach the finish line for a photo finish.

In addition to the Grand Prix mode, there is a Cops and Robbers mode.  Here you will either play the cop or the robber.  As the cop, naturally, your job is to take down all that nasty robbers who are making away with all the cash.  In doing so you turn them into cops to help your cause.  As a robber, you just have to last as long as can getting as much cash as possible.  Drive or Explode is an elimination-style mode in the style of the movie Speed.  Keep your speed above the minimum for as long as you can, or its race over!  As the race progresses this becomes increasingly difficult as the minimum speed gets higher and the AI gets more aggressive.  With the BPM of the music rising all the time only adding to the urgency, Drive or Explode is probably my favourite game mode.

Of course, there is the obligatory Time Trial mode which is self-explanatory.  All of the tracks are available as a mirrored version to add a little variety and there is a staff ghost to give you something to aim for.  Though you can compare your times globally, it would be nice to compare with your friends; maybe something that could be implemented at a later date. 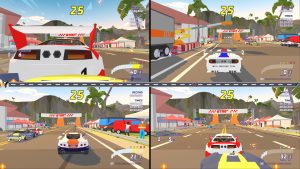 All of the above is available in multiplayer, both online and in split-screen offline.  I did manage to play online with a couple of guys from the Thumb Culture team and it was an absolute blast.  Many laughs and expletives were exchanged without any technical faults.  However you decide to play, there is a whole heap of challenges to be completed it incentivise you to keep driving.  Some exclusive items are rewards for completing such challenges.  Money earned can be used to purchase race suits,  colour palettes and purely cosmetic upgrades.  Sadly these do not influence how your car handles.

The developers are tipping their hats to SEGA on this one with razor-sharp polygons.  With a pinch of Daytona USA, a splash of Split/Second and a healthy dose of Virtua Racing, Hotshot Racing has the distinctive look and feel of a 90’s arcade racer.  It IS a 90’s arcade racer that, at 60FPS suffers zero loss at high speeds.  The environments are great with subtle but noticeable visual finesse.  Look out for the little nod to Jurassic Park on Dino Dash.  Hotshot Racing is sleek, stylish, retro – it is beautiful!

The music composed here has been done so by Norwegian EDM composer Waterflame, and Jason Heine of Heine House.  They have created an awesome soundtrack straight from the heart.  Evidently, a lot of passion has been injected by these gaming musicians to create something that fits perfectly.  Fusing different electronic musical styles from light synthwave to jungle beats, it is the consummate soundtrack to the high velocity of Hotshot Racing.  The sound effects are done really well too.

Honestly, it is a bit of a shame there isn’t more to do at this stage.  For the completionist, there’s enough in the challenges to keep you going.  However, you will be spending a lot of time playing online with friends because there is a lot of fun to be had there.  There is more potential to be had here and I think the developers and publishers will recognise that, so hopefully there is more to come.

Q&A with the Developers

I recently caught up with Trev, a developer at Lucky Mountain Games and he was gracious enough to have a bit of a chat with me.  So here’s what Trev had to say.

Thumb Culture: “How long ago did you start development on Hotshot Racing?”

Trev: “Development started back in 2010.  I worked on the Burnout games at EA, then went to work on the Midnight Club games in at Rockstar London.  When I went independent, I wanted to remind people of Virtua Racing and all the racers I used to play in the Trocadero in London, but use modern handling, multiplayer, etc.  Originally I planned to launch on iOS and Android devices, but we stuck to PC.  After many years of self-funding, Curve Digital got involved.  Then about 18 months ago, myself and Curve Digital partnered with Sumo Digital to create the game as it is now.”

Thumb Culture: “What obstacles did you have to overcome while developing the game?”

Trev: “In the early days, self-funding the game development was a massive challenge”

Thumb Culture: “Why was the name changed from Racing Apex and what are the fundamental differences between that and Hotshot Racing?”

Trev: “Regarding the name change, Apex Legends had come out and there was a top-down racer called Apex Racing (now called Circuit Superstars I think).  There are a lot of differences between what Racing Apex was a few years ago to what Hotshot Racing is now.  The main difference was to return the focus back on the racing, and back to the original inspiration of Virtua Racing, Daytona USA, etc.  So weapons, vehicle conversions and some other bits were dropped, and we and we focused on working with the team at Sumo Digital to get the handling feel somewhere between OutRun 2006 and Split/Second.  For those that like a bit of car on car action, the Cops and Robbers and Drive or Explode mode allow players to take down their friends in multiplayer sessions if they wish.”

Thumb Culture: “Do you have any further plans for Hotshot Racing.  Extra tracks or game modes as DLC?”

Trev: “Regarding DLC, Curve Digital should be releasing some information in the week I believe”

Hotshots Racing is an exemplary entry to arcade racing and is sure to satisfy modern and veteran players alike.  It takes the astute retro aesthetic and combines it with modern handling to bring you a thrilling racing experience.  If this was in arcades now instead of the sad ticket machines we have, I would be ploughing money into it all day long.  It looks brilliant, it’s nostalgic, the soundtrack is awesome and the handling is spot on.  I just wish there was a little bit more of it with some more complex tracks for those who like a bit more of a challenge.

With all this said, Hotshot Racing stands proud on the podium and is awarded the Thumb Culture Gold Award