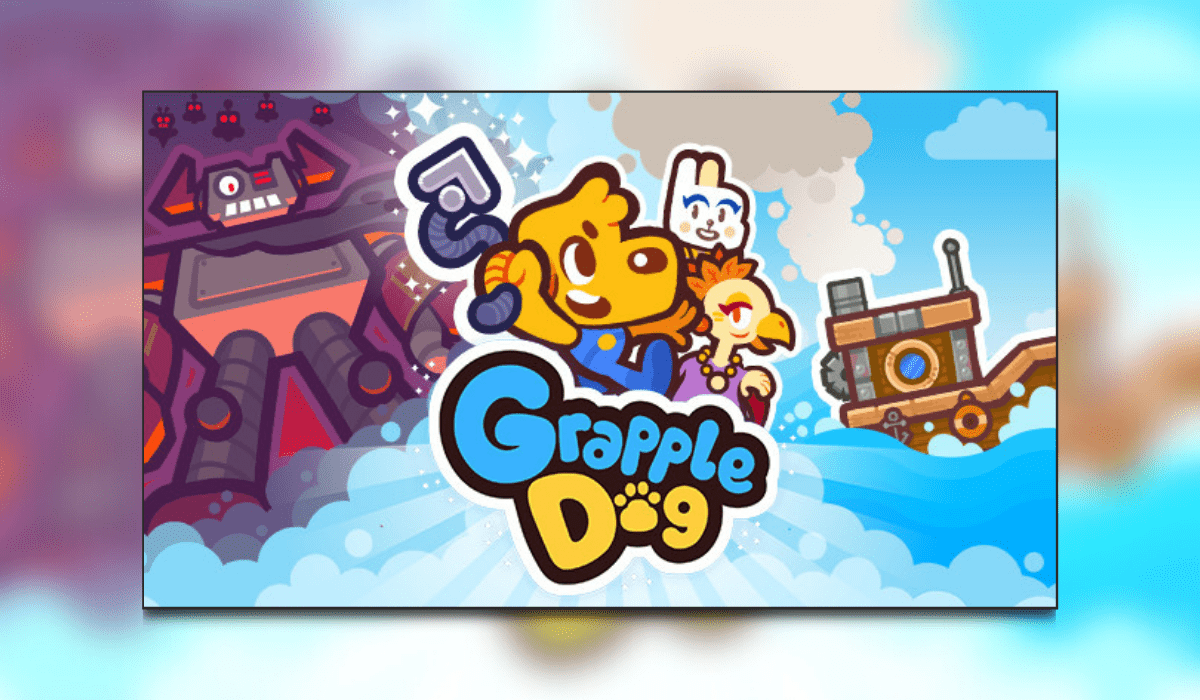 Grapple Dog is a unique 2D action-platformer developed by Medallion Games and published by Super Rare Originals. Released 10th Feb 2022, this appears to be the first title from Medallion Games. It’s currently on Steam for £11.99.

If you’ve followed my previous reviews on Thumb Culture, you’ll notice I tend to go for open world 3D games over 2D platformers. The last platformer I played was a fantastic little game called Hoa. Inspired by this, and armed with a new outlook on 2D platformers, join me as I delve into the world of Grapple Dog.

“Jump, Swing and Zip your way through colourful worlds and exciting challenges in this unique 2D action-platformer! Master the power of the Grapple on your adventure to save the world!”

First of all, the title ‘Grapple Dog‘ tells you pretty much everything you need to know. This title is a 2D pixel-art action platformer who’s main character is a dog with a grappling hook. Grapple Dog sees players swing through levels, facing puzzles, enemies and collectables along the way.

True to the classic style of platformers, the story of Pablo is told through short cut scenes and light NPC interaction. Pablo must find and defeat Nul – an evil robot who seeks to find the cosmic stones, which are scattered across the cosmos. Accidentally awoken by Pablo himself, Nul has tricked Pablo into helping him escape his 1000 year long prison. Accompanied by his allies, Pablo must set out to stop what he himself has set in motion.

At first I found the control system for to be a little confusing, probably because I’m not much of a platformer. However, after a brief adjustment period I managed to grasp the concept of having both hands on the keyboard at the same time, using L, K and J to jump, swing and smash, and WASD to move. Once I’d mastered the control system, I found them to be crisp and clean.

Finally, it has to be said that Grapple Dog is full of extremely well written jokes. These well placed moments of humour scattered through really help with the playability and bring something to the title that is often lacking in platformers.

Grapple Dog is exactly what it says on the tin, a colourful 2D pixel art platformer with some adorably cute characters and collectables. I didn’t notice any visual or audio issues while playing. By using layers, Medallion Games has also managed to create some amazing background art, take a look!

Accompanying this colourful art style are some light and upbeat soundtracks to match. For £4.97 we’re able to pick up the 15 soundtracks created by Jazz Mickle via the Steam store.

There isn’t a whole lot for me to say here. Overall I found this title to be enjoyable, and at no point did I find myself thinking “Boy… I don’t want to do THAT again”. However, I’d happily play through once or twice more to try and get a better speed and make sure I’ve explored the levels to the fullest.

I think for more ‘hardcore’ speedrunners, some tweaks to the grapple mechanic to allow faster deployment would be appealing. Other than this, I can’t think of anything to call out on this title.

I’m pleased to say that puzzles and collectables are introduced over time, and the difficulty/learning curve between stages is very friendly to even the most novice platformer – like me!

Overall I think Grapple Dog is polished and very well designed. It really does stand up to any other platformer I’ve played and takes me back to old school Nintendo vibes. With great mascot-like characters, puzzles and a sense of challenge running throughout, this is definitely a title worth playing. I award Grapple Dog a Thumb Culture Platinum Award.