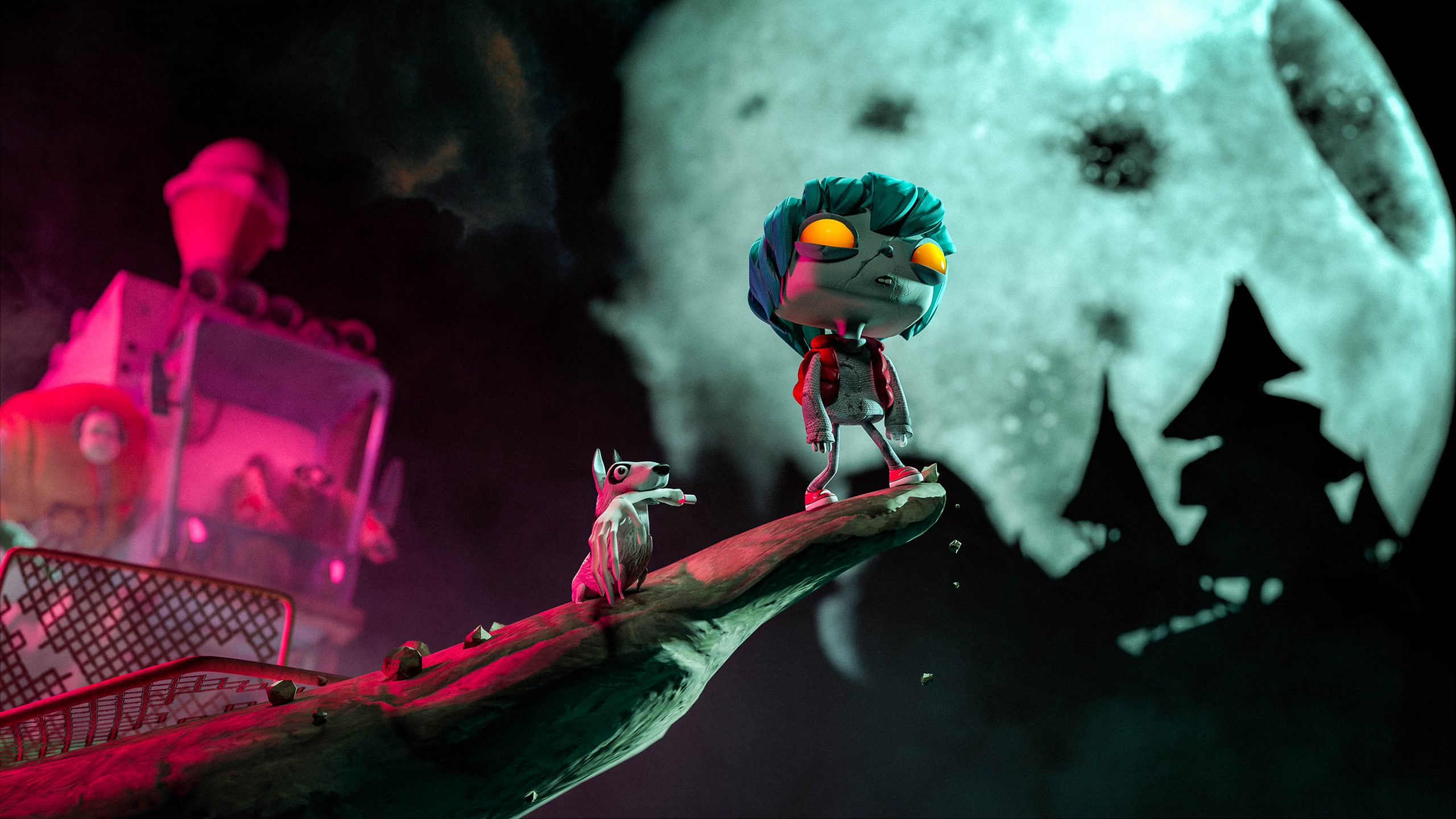 Gloomy Eyes is an immersive narrative VR experience about the sun giving up on mankind and going into hiding; this leads to the world being plunged into darkness with humans and zombies having to co-exist. Gloomy Eyes tells the story of Gloomy and Nena forming a bond and playing out a story in an almost Romeo and Juliet like tragedy.

Gloomy Eyes is the debut title from 3DAR in collaboration with Atlas V; it features a unique art style and the voice of Colin Farrell to narrate the tale. Gloomy Eyes has won multiple awards across the Annecy International Animated Film Festival and the SXSW Film Festival; not to mention a plethora of award nominations at various events.

With Gloomy Eyes being a 3 episode short film, it doesn’t have any gameplay; your only real interaction comes from admiring the animation and trying to get stuck right into the action.

The story does unfold in front of you and as the time progresses you do slowly rotate yourself on the spot to follow along with the story; it’s almost like being able to watch stop motion unfold before your eyes and it is quite magical.

Gloomy Eyes is quite frankly stunning; it plays out like an immersive diorama in a style reminiscent of Tim Burton classics The Nightmare Before Christmas and Corpse Bride. To directly compare this story to those would be disingenuous however as it really does have a unique style all it’s own and tells a unique narrative.

You’ll find yourself following along with the story and immersed by the visuals; episode 1 has you move from a caged zombie/haunted house vibe, through to a sinister ice cream truck raiding what appears to be a DeLorean at a drive-through cinema. Whilst this may sound like the creator chucking ideas at a wall to see what sticks it actually plays out masterfully with each episode being cropped into smaller chapters to tell the story.

Gloomy and Nena want to return the light to their world and some of the set pieces as their love story plays out are absolutely stunning; there’s a particular section within a theme park in episode 2 that really stands out.

The sound of Gloomy Eyes is truly immersive. There is a booming score as Colin Farrell narrates the story unfolding before your eyes; not only that but there is an attention to detail with the sound which can be brought to life with VR.

When you’re watching a normal film, you are presented with the exact framing and sound that the director and film crew brings together. In VR however you’re free to move around and get as close or as far to the action as you wish; with this, in mind, I was often trying to push some scenes to their limits; as one section brings you to a lake, by lowering my head underwater the sound did become muffled and did sound like I was really underwater.

Almost as if Gloomy Eyes was made for me to watch; the soundtrack features some 80’s synth music (think Stranger Things) that really hypes me up at the right times.

Naturally, it’s 3 episodes that form a short story, as such you’re not going to be getting an epic 20-hour open-world adventure; but equally for less than a tenner you’re going to have an engrossing story that you’re free to replay on demand.

If you find value in watching movies or streaming episodes in the traditional sense then you’ll likely be thrilled to witness a VR movie and to engross yourself.

Gloomy Eyes is quite frankly an artistic masterpiece that tells an emotional story of forbidden love in a dark world. With memorable set pieces and incredible character design, you may find yourself wanting to rewatch each episode from time to time and it marks for a wonderful experience to share with friends and family alike.