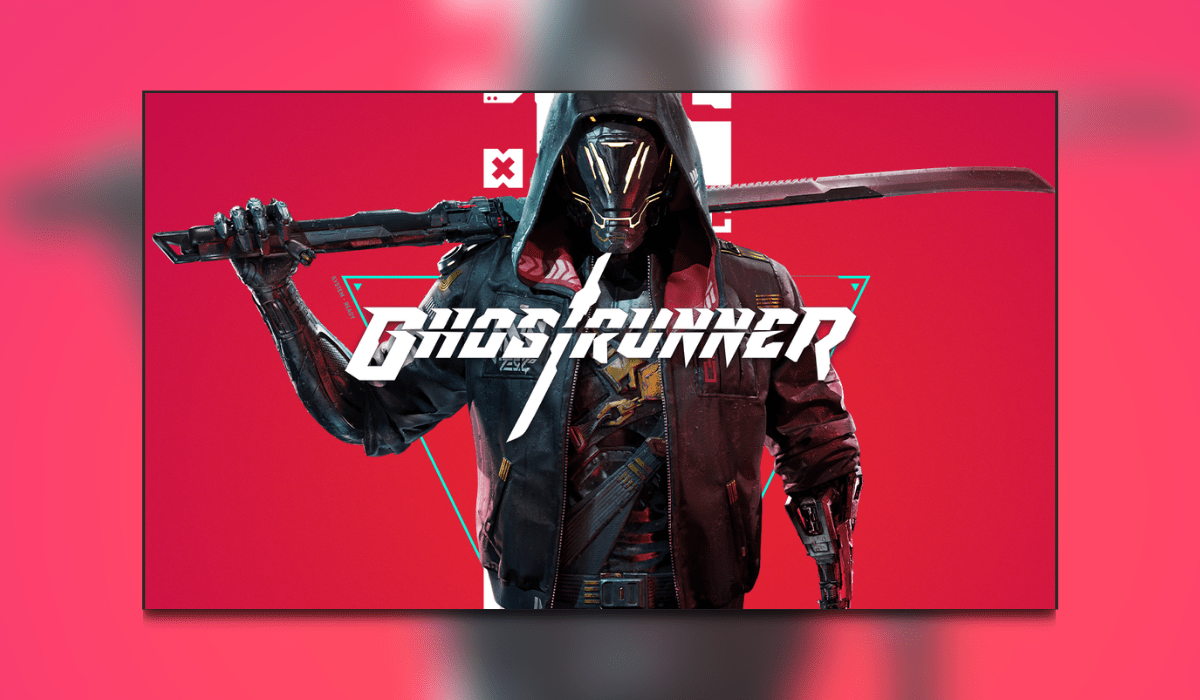 Ghostrunner has received its PS5 and Xbox Series X release taking the originally released game to new heights.  Developed by One More Level, Slipgate Ironworks and 3D Realms, this cyberpunk parkour-samurai-ninja foray looks stunning.  With so much history steeped into the development companies, I was excited to get my PS5 switched on so I could get going!

Ghostrunner – The Ultimate Version of Bop It!

Should you have the PS4 version already then it is refreshing to know that the PS5 version is a free upgrade.  I wish others would follow suit!

After playing the likes of Mirror’s Edge, could I transfer any of my building leaping skills to Ghostrunner?  Let’s get it on!  If you enjoy my review be sure to check out my past articles here.

Set in a post-apocalyptic cyberpunk world, Ghostrunner has a very simple objective.  Get from the start to the finish of each level however you can without falling, being shot, crushed or minced up.

You’re Jack, the last of the elite cyber-ninjas known as Ghostrunners. You must parkour your way through Dharma Tower on the hunt for a self-appointed ruler known as the Keymaster.

Starting off the game, the controls are slowly fed to you as you begin your run through the tower.  Surrounded by a neon landscape that gives an amazing sense of depth, the Blade Runner-esque world looks amazing.  Don’t stand still for too long though as the chances are that you will die!

Guided by a mysterious voice, the skills of jumping, sprinting, wall running, grappling, slashing, and the ability to briefly slow time to allow you to focus your kill are all explained.  The fun bit for me was that a majority of these actions are on the bumper buttons which makes it interesting, to say the least.  What ensued for me was similar to a game of Bop It!  I knew what button to press but in the speed and pressure of the gameplay I ended up pressing the wrong bumper button and falling to my doom.  It is definitely a game to test your cognitive skills!

The haptic feedback on the PS5 controller is brilliant.  Resistance in the triggers along with on-time vibrations match everything you are seeing and doing with what is happening in your hands.  Grappling and wall running feel so great as do the sword swings.

As the enemies stand on their spots with guns training on you, it is your split-second decisions that decide the outcome.  This is a “one kill you’re dead” style game.  Thankfully, should you screw it up you are blessed with two decent features.  Firstly, the checkpoints are never too far back from where you died.  Secondly, the loading times are virtually spontaneous.  What could so easily be total frustration every time you die has been massively relaxed as you are thrown straight back into the action again and again.

As you complete each level you are given a summary of your time and the number of deaths you had (chortle).  On the same screen, there is an indication of the number of collectables, such as audio logs, you found and the best time leaderboard.  Always a great feature when you are either super competitive or love your trophies.

On the PS5 Ghostrunner looks amazing.  In the options, you have the chance to choose between 4K 60fps and performance 1080p 120fps with a 4K backbuffer.  The vast neon cyberpunk cityscapes give an amazing sense of depth as you parkour your way through Dharma Tower.  The details of each platform and obstacle are well drawn with the nearby light sources glistening from them.  Equally the shadows and overall environments just add further to the haunting atmosphere that you are absorbed into during each run.

I must say that the digital levels whereby the world around you is replaced by virtual constructs are really something else! Simply stunning.

The soundtrack that helps bring Ghostrunner to life is composed by Russian born Daniel Deluxe.  With his eclectic electronic synth and retro wave style, it accompanies the game perfectly.  The sound effects nicely blend in with the action as you navigate each grapple point, slide and wall while guidance is given verbally by a few characters such as the Architect.  Whispers can be heard at times from neighbouring houses as well as industrial ambience as you traverse from area to area.

Ghostrunner has around 8 hours of story to it depending on how skilful you are.  There are of course a number of achievements that can be unlocked that will almost double that time.  Extra game modes such as Wave Mode and Assist Mode serve to both challenge you and also lessen the intensity of the game by allowing you to change some of the gameplay options.  Changing reaction time is definitely a big hit for those late-night gaming sessions!

Ghostrunner is jaw-dropping on the PS5 making full use of the raytracing capabilities as well as the haptic feedback on the controller.  There are not many games that show off the PS5 in all its glory, thankfully this one does.  Thanks to the super-speedy loading times what could be a really annoying game due to the ease of death, is not.  What you are left with is a masterpiece where your lightning reflexes will be tested to the core and eventual success is amazingly rewarding.