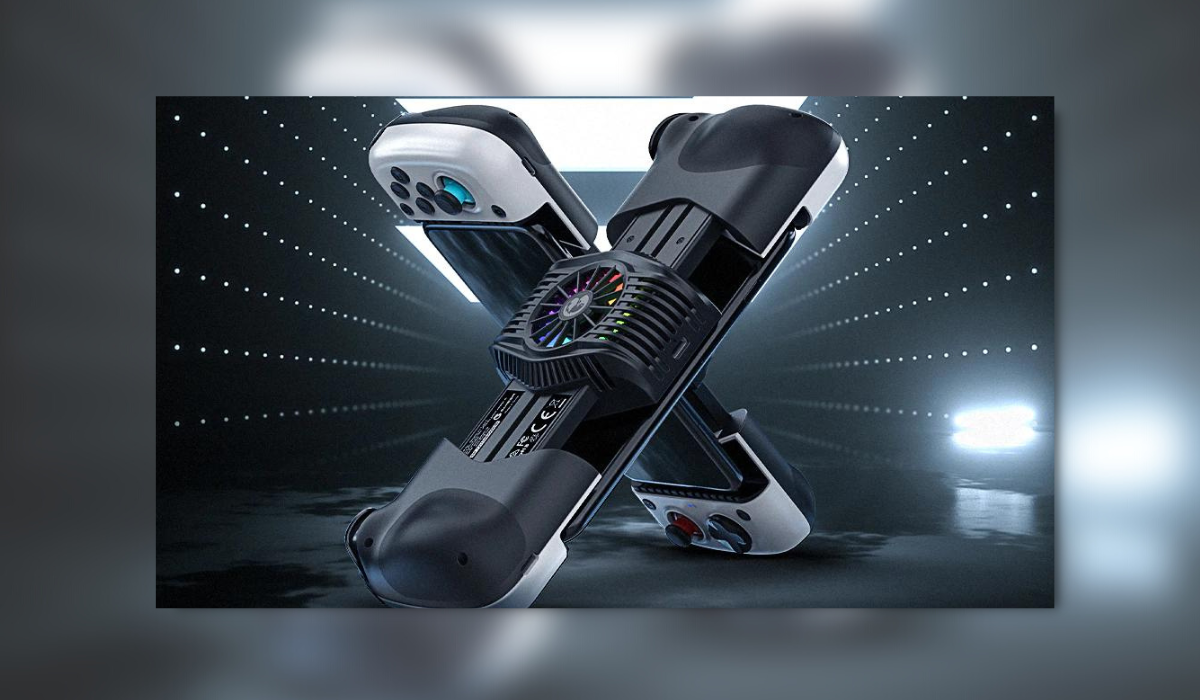 Mobile gaming has been evolving for years ever since snake gave us other things to do than actually ring and text people. With the advent of more sophisticated mobile phones along with cloud-based game streaming, controlling your favourite racer or fps can be a bit limiting when trying to rub your fingers and thumbs over the touch screen. While devices have been around for the last couple of years to allow you to provide your mobile phone with thumbsticks and buttons, I must say that I haven’t seen anything quite like GameSir’s latest device, the X3.

GameSir X3 – Gaming that is chilled to the max

Zipped up within a black and red piped hardcase lies the GamerSir X3. Conveniently ready for travel, it is held in place with Velcro straps while the top part of the case houses a power cable along with a red box of accessories. As no doubt you have seen from the image earlier, the X3 comes in white and has an almost Nintendo Switch look to it with red and blue thumb stick bases.

I received the GameSir X3 type C that is compatible with Android phones with a USB-C charge port and have Android 9.0 onwards. There is not currently an iPhone version available. The X3 simply expands left and right to open up wide enough for your (uncased) mobile phone to slide onto the USB-C connector and be held in place centrally (phone length must be between 110mm and 179mm). You can rest assured that your mobile phone is not going anywhere due to the immense grip thanks to the sprung mechanism within.

When it comes to the controls you have a typical gamepad setup featuring two clickable thumbsticks, a directional pad, 4 action buttons as well as 2 bumper and trigger buttons on either side at the top. The four circular black buttons that are located on either side of where your mobile phone goes become functions such as options, one-tap screenshot, home, etc depending on your mobile device and what you are playing. The triggers and buttons are all Kailh switches with 0.6mm of attenuation distance which makes them a lot more responsive than the traditional membrane buttons.

Within the accessories box are a couple of different style thumbstick caps as well as two taller replacement thumbsticks and a more ergonomic D-pad if you prefer the feel of more directional ways for your thumb. What I did love about the X3 is that the buttons, D-pad and thumbsticks are all magnetic. This makes interchanging accessories slightly easier although the buttons, which can be reconfigured into new positions, are quite tricky to get your fingers around in order to pull them out.

The GameSir X3 controller does not have an integral battery and therefore weighs in at 270g. To put that into comparison, my Samsung S21 Ultra weighs 229g. In your hands however, the coupled up controller and phone ensemble does not feel that weighty, although you wouldn’t want to be dropping the unit as that would spell game over. As the controller does not have a battery it therefore uses some of your mobile phone’s juice to keep it functional. When I say functional, I mean to say that this is just for being able to press the buttons and play a game. The X3 is ultra-low on the battery and is recorded to use around 2mAh based on a 3000mAh typical mobile phone battery.

One of the biggest selling points for the X3 is the cooling that it offers. Located on the rear is a small fan that keeps the 4000mm² back plate where your mobile phone rests cool. The idea is that any heat generated by operating your phone for long durations will be dissipated. In fact, there can be up to 24°C drop in surface temperature! To make it more of an eye-catcher, the fan does incorporate some snazzy RGB lighting. For the fan to be functional you will need to power it separately via the included 1.5m USB-C cable. This can either be from a 5v 2A power bank or a USB plug socket and this stops your phone from being drained!

Getting to the end of my design section, there is a second USB-C port on the bottom of the controller that lets you charge your phone while playing. This is so long as your mobile device allows pass-through charging.

Finally, when it comes to the audio you are best to pair to your phone using Bluetooth as there is no 3.5mm jack outlet.

With zero latency I couldn’t wait to jump into some of the games that were waiting for me on Xbox Cloud Gaming. I had refrained from playing certain games on my phone purely because I didn’t like blocking the screen out with my large fingers, nor did I like the feel as it was not tactile. The X3 made it feel as if I was playing on a Nintendo Switch Lite and gave me the button and trigger feedback that I was desiring. The thumb sticks felt equally smooth when aiming and moving my character around.

Playing a few rounds of Fortnite and also taking my F40 out for a spin on Forza was great fun! After a little while of playing with the various thumb grips to see what worked best for me, I finally found a winning combination. I wasn’t too fussed with altering the action buttons around as I seldom look down at them anyway.

If Xbox gaming isn’t your thing then feel free to download the TapTap app onto your mobile phone. TapTap is a mobile games discovery platform where you can find awesome games such as the incredible Pascal’s Wager and House Flipper as well as classics such as Call of Duty Mobile and of course, Fortnite.

Now what makes the TapTap app better than the usual game store apps is that it is more of a social hub. It is full of gaming videos, guides, community discussions as well as some exclusive games and beta opportunities that you will not want to miss! The menu is very simple to navigate and provides a welcoming platform for gamers of all genres.

I tried playing with both the fan on and off and it did not make much difference to how my phone reacted temperature-wise while I was gaming. That said if you have both the fan and your phone charging at the same time while gaming then the fan does help to keep the phone cool. My S21 Ultra did not feel at all warm on the back plate when I finished my session.

The GameSir X3 is a very desirable mobile gaming controller to have. It does not feel cheap due to the build quality that is shown off the first time you play. The cradle is strong and encompassed my mobile phone securely, I had no concerns that it was going to fall out if the controller was knocked. The fan does serve a purpose and I do believe that with more demanding mobile phones it isn’t a bad feature to include, however, it is purely optional if you want to have it running or not. I would rather grab some charge via the other port so that my phone is in a good place when I get off the train.

Overall with its solid build I give the GameSir X3 a Thumb Culture Platinum award.

Disclaimer: This is a sponsored article with Gamesir & TapTap