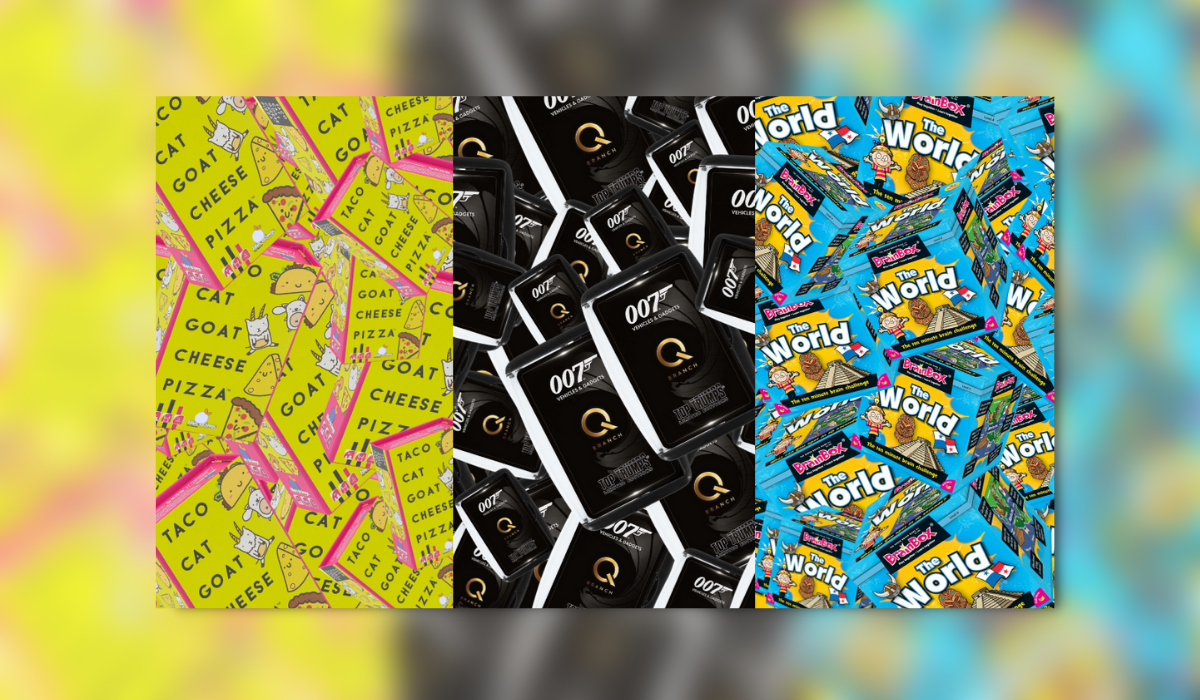 Video games have been a part of our society since the 1970s. Where it has got to the point of it being the most profitable entertainment in the world. But what about the other forms of games? The card games, the board games. Well, today we are going to take a little look at just a handful of these games and give ourselves some breathing space from video games. As we take a look at Games To Play Away From Video Games.

If you enjoyed reading this little feature and the world of games outside video games then why not check my latest review here. You can also catch up with what the rest of the Thumb Culture team is up to on our social media.

Now saying Top Trumps has been around for a while would be an understatement. A company that was founded back in 1978 with only a couple of sets being made. It wasn’t before long till a couple of sets turned into a couple of thousand.

There have been more franchises associated with Top Trumps that it would be borderline impossible to mention them all. The premise of the game really simple. Each card has a set of numbers and it’s up to the player to pick and choose a number. If that number is higher than the opposing player’s number then you win that card. The process continues until you have all of your opponent’s cards. 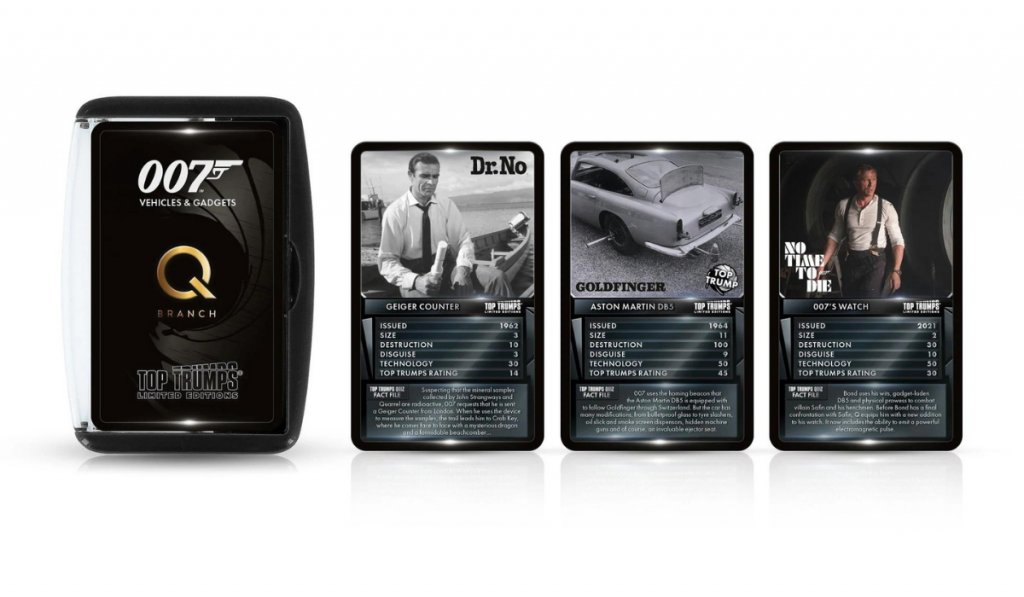 If there is a movie or a tv series, or into classic cars, boats, planes, or mythical creatures that you are into then can guarantee that Top Trumps have made a card set based on it. Now our good friends over at WinningMoves were kind enough to send over a couple of sets.

The first set is the Limited Edition James Bond Vehicles and Gadgets Q Set. If you are a James Bond fan then this set is definitely for you. from the classic Aston Martin to the watch in Goldeneye. Each game can last around 10 minutes just most of that time will be spent reading the little info bits that each card has. Only 10 minutes but 10 minutes of some light-hearted fun. 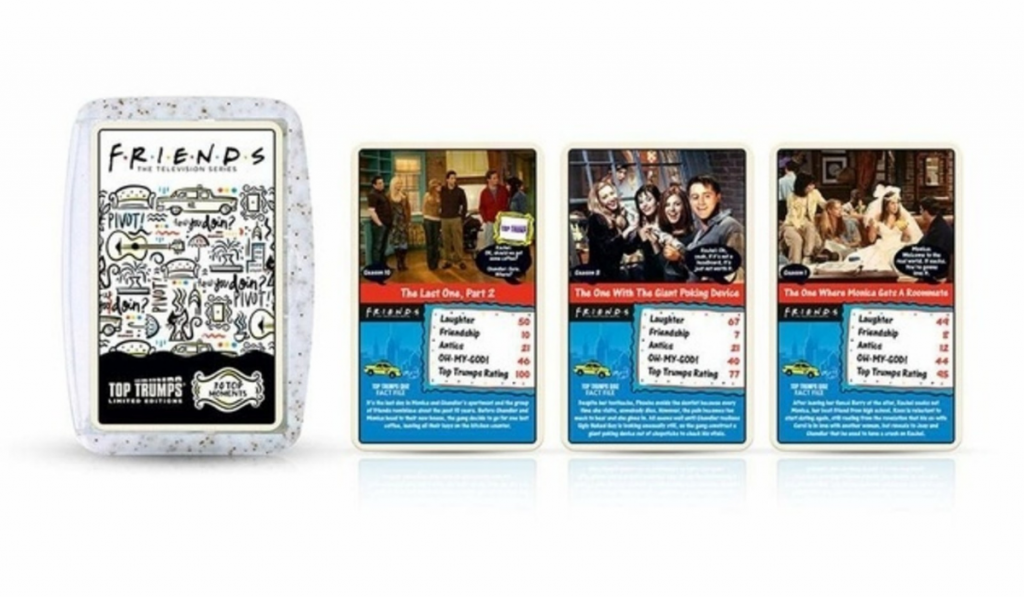 The second set we got was the Limited Edition Friends Set. Now, this set was more up my street as I am a huge Friends fan and still watch it to this day. It’s the same as every other Top Trumps game where it can last only around 10 minutes but the little behind the scenes text you see on each card will make the gameplay longer. I had more fun with this but maybe I’m just being biased as I’ve never seen a Bond film before (I know shocking right)

BrainBox has been around since 2007 and it just keeps getting more popular with each passing year. With over 8 million copies sold worldwide, it’s not hard to understand why this game has so many people hooked. There are so many editions now that it’s easy to find the kind of game that suits you.

Editions like Football, movies, animals, maths, there is even a whole board game based on BrainBox. The edition we look at today is The World Edition. The game features 55 different countries and contains over 440 questions. The rules are so simple that the age range can be from children to adults. 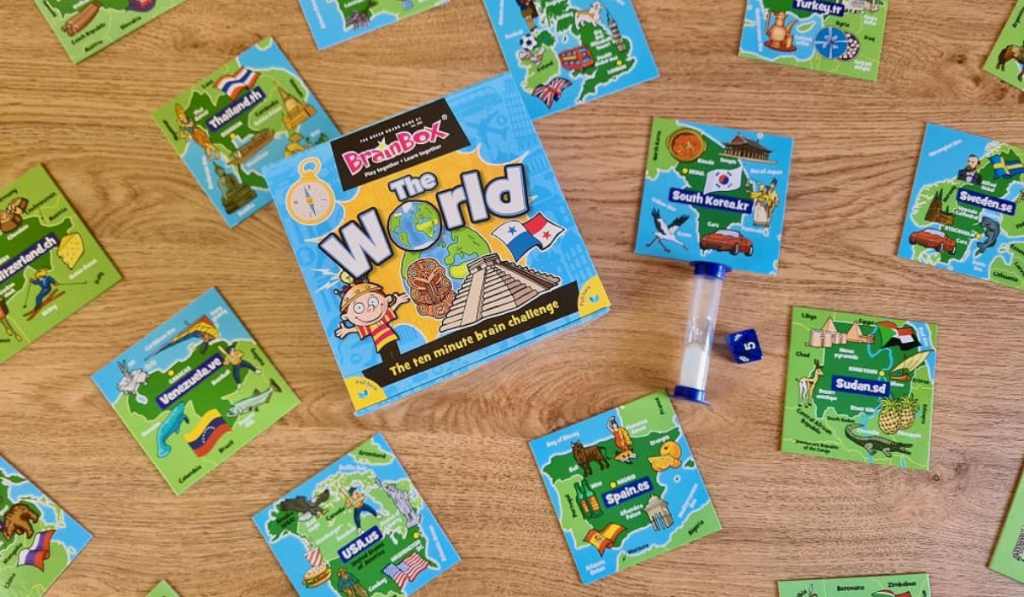 The rules are as follows. Each player picks a card from the deck and has 10 seconds to memorize the details that are on that card. Then you roll the dice and answer the numbered question that is on the reverse of the card. You repeat the process for 10 minutes and whoever has the most cards after 10 minutes is the winner.

What I personally love about the BrainBox games is the artwork. Each illustration on the cards is hand-drawn and I really like that.

Made by Blue Orange. Taco, Cat, Goat, Cheese, Pizza is a game that will test your reflexes while also doing its best to scramble your brain. In the game, each player calls out Taco, Cat, Goat, Cheese, Pizza in that order. Until the spoken word matches the card and all players must avoid being the last to slap the pile and have to add it to their hand.

On the surface, the game doesn’t really look like much and it may take a couple of games to really get into it. But once you get into the groove then it just becomes quite addicting. This is a prime example of a family game. It can be played with 2 players but to get the most enjoyment then get 4 players. 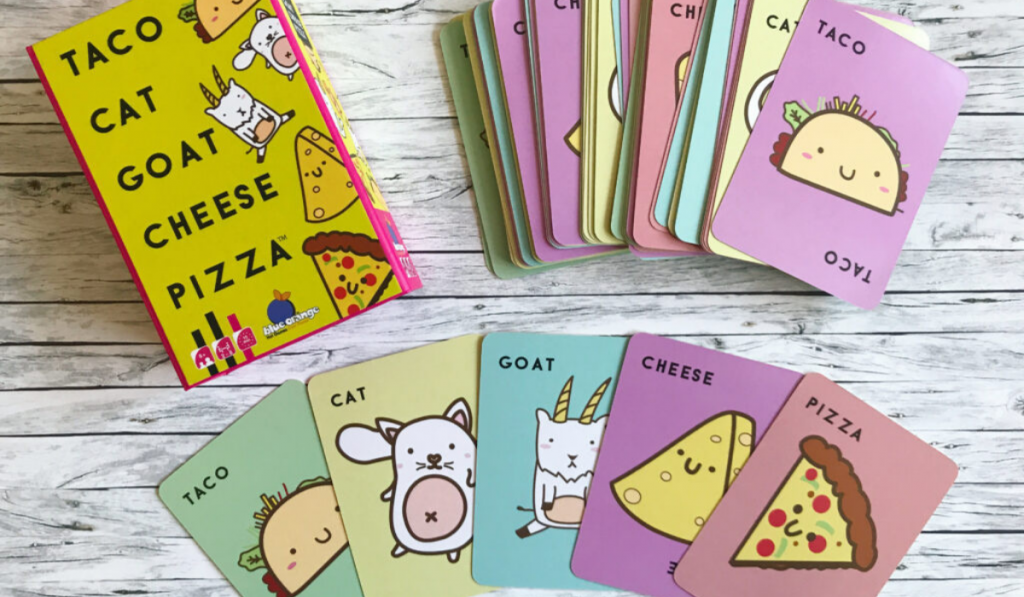 When 4 players are involved then it’s just a free for all and you probably won’t stop laughing to even take the game seriously. The artwork on each card is great as they look like a child has drawn them and that gives it a certain charm. It’s the box that does it for me. The cards and instructions come in a little box that opens and closes on a magnetic strip.

All four games are great for some entertainment with not just adults but with kids as well. So if any of these games take your fancy then make sure to check out both the websites for Asmodee and Winning Moves and let us know if you end up picking anything up!

Disclaimer: A product review was received in order to write this review.