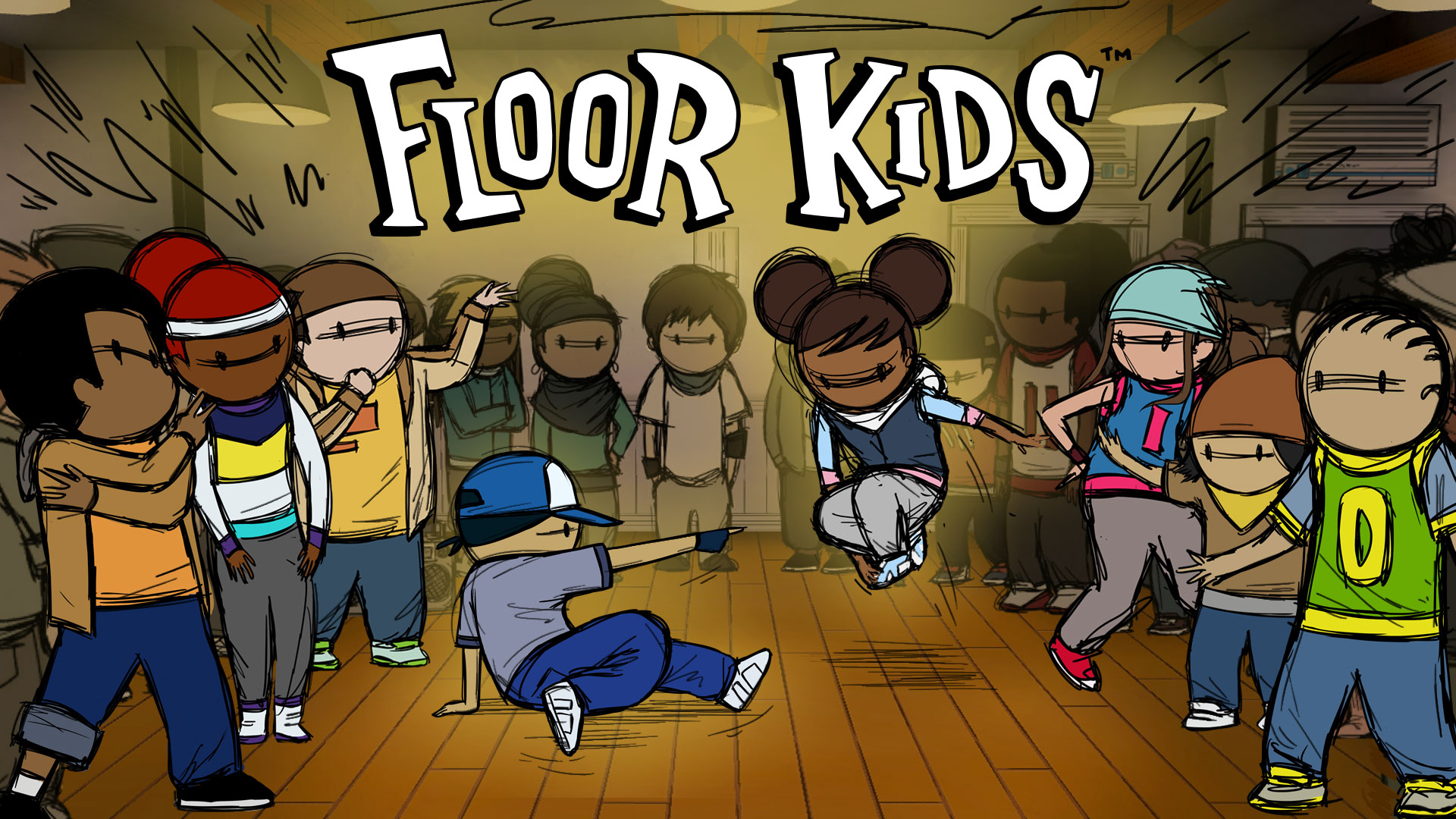 Floor Kids by Canadian based MERJ Media is a break-dancing battle game available on Nintendo Switch and PC with Playstation and Xbox in the near future.  Floor Kids lets you learn skills, build a crew and find your style.  Are you the next Ashley Banjo? or maybe you fancy yourself as an extra from that Run DMC music video!

Feel the rhythm, feel the rhyme! Get on up, it’s Floor Kids time!

With a GTA intro style beat playing in the background I was optimistic how Floor Kids would play out.  The only dancing games I have ever played have either been down the arcades (back in the day) or behind closed curtains using the Playstation Camera to track my silky movements across the living room floor.  The fun and rewarding aspect of your physical movement being in time with the beat is how dance games work right? well not in this case.

Floor Kids invites you to pickup a controller and take your quick-fire street fighter skills to the test.  Can you press buttons in time with the beat? Can you impress the crowd with your dance moves? You are about to find out!

Floor Kids is set in a city and revolves around a group of young dancers, 8 to be precise, with funky names such as Scribbles, O-Live and Noogie.  Each character has their own set of skills and abilities which affect their performances.  Starting at The Studio, the idea is to take on the 3 dance tracks that feature in each location within the city and be scored out of 10 for your Funk, Flavor, Flow, Fire and Flyness.  Your final score denotes the amount of crowns you gain for the track with a maximum of 5 possible.  As you accrue crowns you unlock the next city location such as The Corner and Groovy Store all the way to your goal, The Peace Summit.  If you score 3 or more crowns on a track then you are rewarded with a Dancer Card, once you have 4 Dancer Cards, guess what? you unlock a new dancer!  In total there are 8 locations to party through, each with their own set of tracks.

Once you have selected a starting character and track to dance to, it is off to the floor to strut your stuff infront of the crowds.  Each 2 minute track is split into 4 parts switching between a freestyle dance and a tap to the beat section.  To score points  and keep those watchers entertained you need to press the controller buttons in time with the beat of the track, a handy ghetto blaster style EQ pulses across the top of the screen to keep you in time although the thump of the beat is pretty obvious and stands out well in each track.  Your dance moves are split into 4 categories; Toprock, Downrock, Power and Freeze.  They are selected by either flicking the left stick of the controller up, down, around in circles or holding the stick in a particular direction while holding/hammering the buttons at the correct time.  Keeping the moves fresh is a must to score those combos and every so often the crowd calls out for you to pull off a certain category.  Get it right and you are rewarded with a score bonus which also helps towards your final rating at the end.

The Tap to the Beat stage was pretty chaotic first time around as I didn’t appreciate what was coming up.  After a count down of 4,3,2,1 you are shown a row of squares with X’s spaced out along them.  Pretty soon I realised that I was to hit the controller buttons in time with the X’s as the beat carried you along.  After 2 rows of precise tapping you are then shown a grid of question marks and you are to rapidly press the buttons as quick as possible to boost that score.  This part was a nice break from the freestyle dancing however as it is a chorus part of the track the beat you have gotten used to is slightly different and it will test you until you get used to how this part of the track goes.

The controls during the game were very responsive with no signs of lag when tapping in time to the beat, I struggled a little to sometimes switch between moves however with a little more play I’m sure I could better my Flow score easily.  That said I smashed 4 out of 5 crowns on my first track!  A Sesame Street style calling out of the number “4” resonated through my headset as both children and adults hollered out the number of crowns I had scored randomly in the background while the beat of the track banged on.

The number of discovered dance moves appear at the end of the track along with the Dancer Card that you have hopefully gained.  Looking at your Break Deck allows you to go back through the dance move cards for each dancer to see how to pull of that particular move, if you are that interested in what the name is of it is, however in the heat of the moment I found myself popping all kinds of moves out while ensuring that I banged the buttons at the right time without necessarily realising what dance move I was actually performing.  Combo scoring all the way baby!

As you can probably tell by the screenshots, the graphics are of a cartoon-sketch style that are not quite complete, i.e some of the sketch lines need rubbing out and other bits coloured in.  To be honest I love the way that Floor Kids has been drawn and it gives a real urban graffiti feel to the game as well as animating really well.  Pulling off spins, freezes and shuffles looked effortless on the screen as the crowd begged for more.  The cutscenes between city sections are in a comic book style with picture panes and text beside them, each interlude comes across with a mystical and almost spiritual connection to dancing and the music.

The heart and soul of Floor Kids is indeed the rhythm.  Here you will find many tracks to get your groove on to ranging from funk to hip-hop, each style testing your ability to dominate that dance floor and string the best combos you can muster.  For me I had a real chemical brothers moment with a few of a tracks as the beat took over my brain and I became one with the bassy tones. (Lookup the album Exit Planet Dust, you won’t be disappointed!)

Floor Kids features 8 unlockable urban areas within the city as well as 8 crazy dancers to eventually use so long as you score those crowns and gain those Dancer Cards.  As well as the single player campaign there is a multiplayer option which lets you pit your skills locally against a friend to earn those crucial boombastic bragging rights.  If you still want more then there is an infinity mode where you can dance to your hearts content without the restrictions of time or goals.

In summary Floor Kids is a fun and unique game that tests your rhythm without the need to get too physical and start embarrassing yourself infront of the rest of your family and friends.  The number of dance moves that you can pull off and combos that you can discover make for a great variety of tricks and throwdowns to aid your climb to dancing fame and conquer that ever nearing final city section.  There is plenty to do and this is certainly less frustrating than learning all the moves to streetfighter!

Disclaimer: A review code was received to write this article. My neck hurts from all of the nodding to the beat!