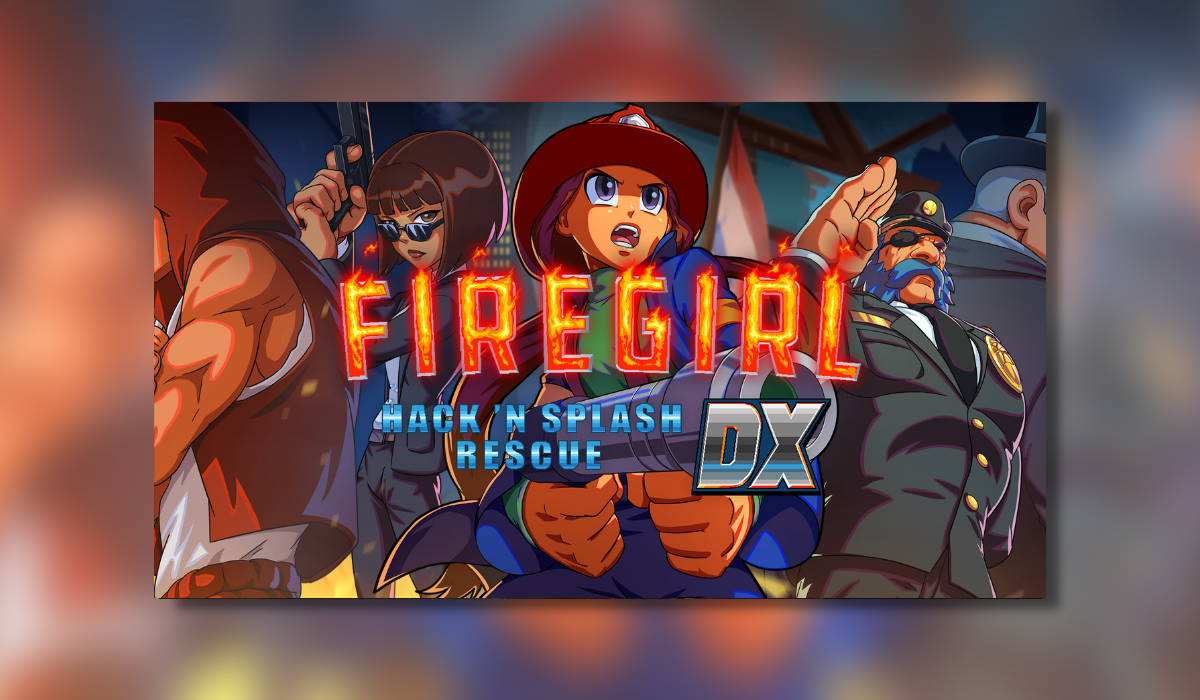 In the age of modern-day AAA games with complex storylines that can run for hundreds of hours, it’s nice to return to some smaller indie titles to recharge the gaming mojo. Firegirl: Hack n Splash Rescue DX is one such title that offers some simple pick-up and play controls with a straightforward story. So let’s jump into this Firegirl: Hack n Splash Rescue DX– PS5 Review

The Roguelite Action Platformer is developed by indie studio Dejima Games and published by Thunderful Games.

Playing as Firegirl, the rookie daughter of a firefighter who died in the line of duty, players are tasked with tackling the many mysterious fires occurring throughout the city. Arriving on the scene, there’s a set time to get through the level and find people/animals to be rescued.

The run can be extended with in-game time extension pickups and extinguishing fire monsters also grants some additional time.

The 2.5D rogue-lite action platformer has a retro arcade feel to it. Armed with an axe and firehose players smash debris or open doors to new areas and propel themselves to out-of-reach areas using the pressure in the hose. Said pressure is finite but can be replenished by finding water within the level.

Equipment can be upgraded by spending the funds you receive from completing missions. New recruits can also be hired to aid with lowering costs, increasing health, and gaining more fans, to name but a few.

Levels are procedurally generated in real-time, with some varied locations. This variation does take some time to arrive in the game which is a shame.

It would serve the game better if the various locations cycled through the game earlier, increasing the challenge with enemy types and more rescues to complete as the player increases their skills.

Although the story is simple and easy to follow, it touches on topics like corruption and post-traumatic stress. It plays out at a nice pace with some mysteries to uncover.

Upon completing a mission you are given a breakdown of how you fared and the rewards you are receiving and the fans that you have accumulated. The greater level of fans you have the bigger the potential rewards for a successful mission.

The hand-drawn pixel art here is beautiful. Dynamic lighting, shadows and reflections make the world feel atmospheric and the 2D character traversing a 3D diorama has a real charm to it. It has a very unique style.

The character designs are great and aptly embody the different personalities Firegirl encounters throughout the adventure.

The catchy music perfectly fits the levels and even though repetitive, it never felt so. One tune got stuck in my head and had me humming it while away from the game.

There’s about 6-8hrs of fun to be had here. Unlocking skills, perks and upgrades makes you feel more and more badass. You really start to speed run through levels picking up some sweet monetary rewards for your exploits.

There is also a Platinum trophy to aim for that’s fairly achievable, with just 22 trophies to collect. At the time of writing, I’ve just one task to complete to ding that plat.

Firegirl: Hack n Splash Rescue DX is fun, but only when you get past a frustrating initial hump. It suffers from balance issues with its progression and economy. It may be a push that many players are unwilling to grind through.

The team at Dejima Games have created a great-looking game with addictive gameplay however, the balance issues need to be addressed to allow the game to get its hooks in.

If you want a fun arcade-style game that’s easy to jump in/out of then check this one out.