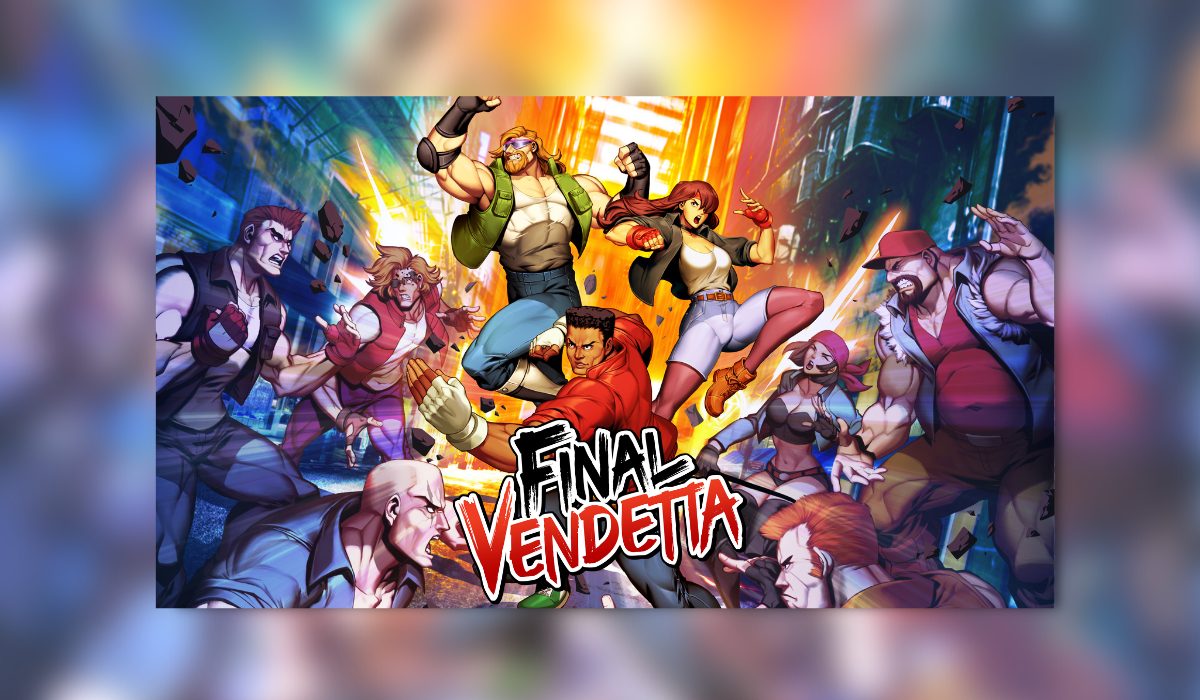 Today we take a look at a game that 90s beat-em-up fans have been foaming at their 40-year-old mouths for. We are checking out Final Vendetta. This is Bitmap Bureau’s love letter to games like Streets of Rage and Final Fight that promises to pack a pixely punch.

Final Vendetta releases on June 17th, 2022 on Switch, PS4, PS5 & Xbox, and Steam. The game will be released digitally but fear not physical collectors! If you like me, were born in the 80s and will always want a physical copy over digital, some Limited edition versions have you covered. The standard, collector’s, and the Super Limited Editions will be available in limited numbers.

So let’s see what has the retro gaming community chomping at the bit in Final Vendetta.

It’s a classic kidnapping situation, but this time it’s no one’s girlfriend. Juliette, the sister of one of our heroes Claire Sparks, is being held for ransom by the group known as Syndic-8. Naturally, Claire is not impressed so she is on a mission with her mates to go and get her back.

Before you get started, you can pick one of three characters. Claire, my hero of choice reminds me a lot of Blaze from Streets of Rage, who is also my favourite from that game. She is a sassy little minx with a lot of pent-up aggression and it shows in her style. She is fast and the strongest out of all three of them and her move set will rival that of any of her enemies. You do not want to get in her way.

My second favourite is Duke. Another British badass whose strength does not quite match up with Claire’s. But he more than makes up for that in speed. He is the fastest of all three and with lightning-fast punches and street fighting style, he makes for a formidable opponent. And to talk about Streets of Rage again, if you ever played as Axel, you may recognise some of his moves.

Lastly, but by no means least, we have Miller. He is the slowest of the three and despite his stature, he is also the weakest. I’d like to say he reminds me of Haggar from Final Fight. But in reality, he looks like what you would get if you ordered 80s wrestling legend, Ultimate Warrior, from Wish.com. Looks aside, you still want him in your corner in a crowded situation. His Tornado Twister special move is just what you need to get out of a tight spot.

From the outset, you might want to check out the options and change the difficulty. Easy and Hard are available straight away, but hard is set as default. I grew up on games like this and even I found it challenging towards the end on Easy mode. This makes for some fantastic and rewarding fun. Oh, and just to add, when your lives run out it is game over! There are no continues, there are no save states. Right back to the start, you go. Even older games had continues, and you needed them! If, and that’s a big IF, you beat the game on hard mode with Ultimate Warr…ahem, Miller, you then unlock the Ultra difficulty. Good luck!

You can choose to play single-player, or 2-player with a buddy locally which is brilliant fun. Just try not to hit each other ok. That goes for real life too, not just in the game. Until you beat the game, only Arcade Mode is available. Once you beat the game that opens up the Survival, Versus, Boss Rush, and Training Modes.

These are exactly as the sound. In Survival Mode you just have to last as long as you can without being pummelled to death. Complete the game with Duke to unlock this. In Versus mode you just have to fight each other. Boss Rush Mode is a particular favourite of mine and is only available after you beat the game with Claire. I’ll tell you, Dark Souls has nothing on this, as you only have one life in which to beat all the bosses one after another. Training Mode is where you can choose to fight any enemy you wish and hone your skills.

Arcade Mode is where the meat and bones of the package are and it is a truly classic beat-em-up! You will be side-scrolling your way, kicking the ass of everyone you meet to try and save your sister. Along the way, you will find various weapons with which to brutalise them ranging from a dagger, a katana and even a discarded drainpipe. And because it is totally normal to eat chicken from a bin and pizza off the ground, there are health pick-ups too. Only in beat-em-ups!

You will also find money, jewels, and other valuable items along the way to increase your overall score. At the end of the stage, you will be ranked based on a number of factors. Avoid getting beaten, using up lives, keep your attack chain high and you might get that S-rank! The game is set over six stages with a boss at the end of each one. If I had one criticism, I would say the stages were just a little on the short side. I would have liked just a few more minutes of gameplay on each stage.

Combat is incredibly satisfying as you are knocking the pixels out of your foes. You have a hodgepodge of moves available to you so mix it up, get into a rhythm and see what suits you. Take advantage of the fact that when an enemy is down, you can get some cheap shots in by stomping on them. You can also block and dodge, but that’s for wimps. Make good use of your special moves to get out of a tight spot. Your super gauge will fill up with each successful attack and once full, you can unleash your devastating super move. There are even some secret moves in there if you can work out the button combinations. Obviously, I had some accidental ones and could not replicate them.

Final Vendetta feels slick and really smooth to play. It’s a hard-hitting throwback to when the beat-em-up genre was king and I loved every minute of it. It left me grinning from ear to ear thinking that this would have sat nicely in my Mega Drive collection back in 1991. It would have been a classic and gone down in history as one of the greatest if it was made then.

What can I say? This game is proof that you do not need to have realistic graphics to make a great game. I might be a little biased because I grew up on a diet of vectors, pixels, and then polygons, and I still play these retro games today, but the pixel-art knocks it out of the park! The presentation and the colour palette really jump out at you from intro to finish. If you were so inclined, you may also use the CRT shader in the options to recreate that authentic retro experience.

The sound effects really pack a punch too. There is a colossal amount of gratification hearing your punches and kicks connecting as you see their pixelly mush distort with pain. Something else that was great about the Streets of Rage games is that the tunes were always on point. Final Vendetta is no different. Utah Saints and Featurecast bring their A-game and lay down some phat techno beats. The perfect complement to beating down douchebags.

The game itself is fairly short and can be completed in about an hour or less. But it is so good it keeps you coming back for more. There is always the prospect of trying to beat your or your friend’s high score. Of course, there are three characters to beat the game with, opening up the other modes for even more hours of fun. For an additional challenge, there are the trophies/achievements to keep you going. And they are far from easy, which makes it all the more delightful when that trophy pops.

Get your favourite shell suit out, put your Pogs away, slap a Mega Drive label on it, and add it to your collection now! Final Vendetta, although short is fun from start to finish with tons of replay value and I would recommend this to anyone who is a fan of beat-em-ups. Even if you’re not a fan, I would recommend it because it is that much fun! I found it hard to put down without picking back up and saying “just one more game”. The biggest lie we all tell ourselves. The combat is classy and the beats are sick. Therefore Final Vendetta gets the Thumb Culture Platinum Award.