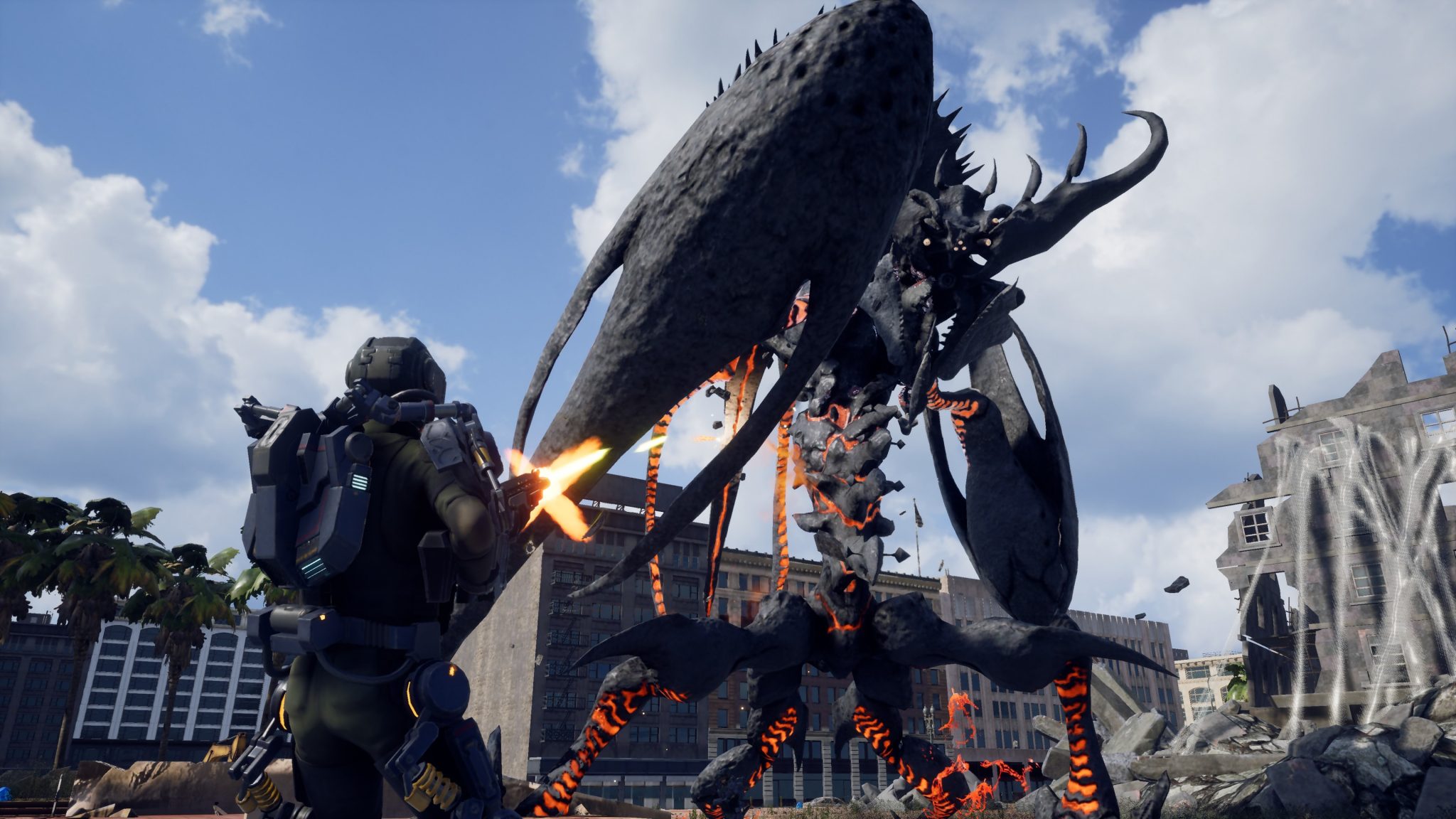 Earth Defense Force: Iron rain is a third-person arcade shooter game developed by Yuke’s and published by D3 Publisher. The game will be released on PS4 on the 11th April 2019. With multiple weapon choices, your own personalized character and giant bugs to squish (via rockets and bullets) what else is there to have in an arcade game? Huge robots that want to kill you of course! if you’ve played the previous Earth Defense Force games you may want to try this one out, I hear Yuke’s have upped their game massively to bring you Iron Rain! 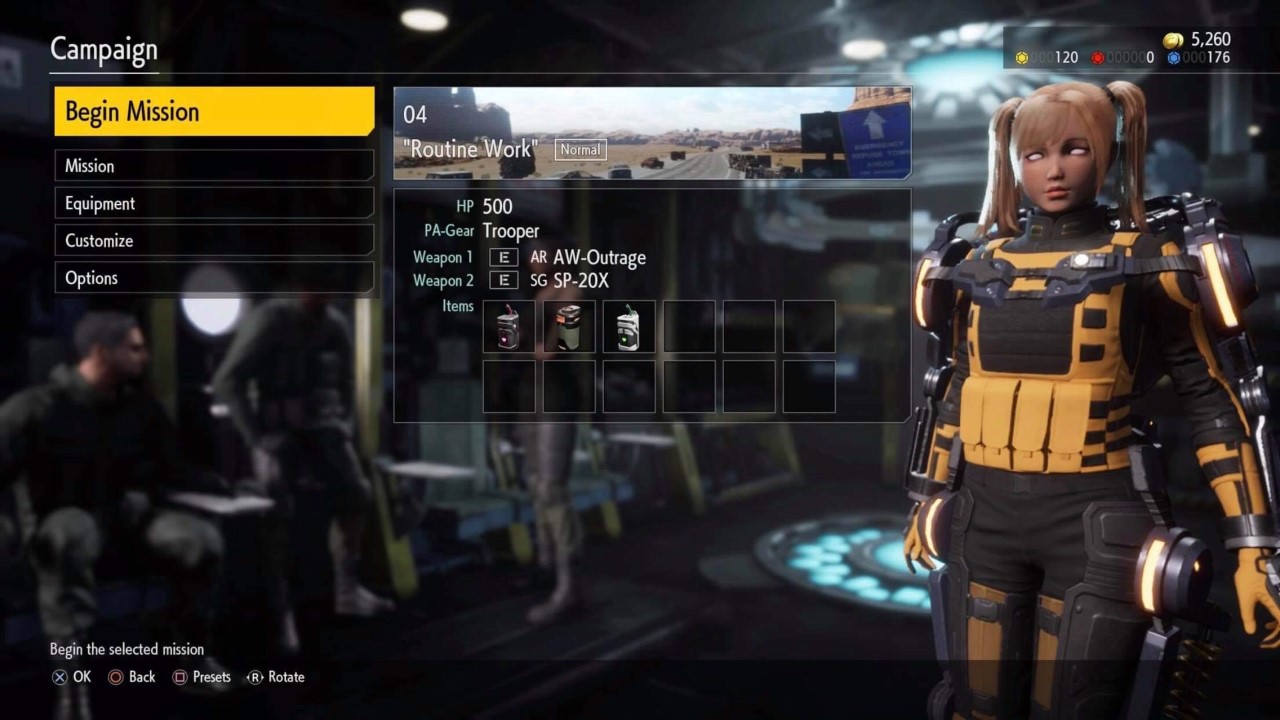 hit me baby one more time?

First of all, you get to design what character you want to create, you can personalize it any way you want, starting with gender, then hairstyle, body type, facial hair and many more! I think as an avid sims player I did enjoy this a lot more than others may do! Once you’ve discovered what beautiful character you want you can then head into what loadout you wish to have, shotguns, machine guns there are loads to go through!

Along the campaign, you will see different pickups like gems which are used to purchase better guns or green crystals that regenerate health so them huge critters don’t finish you off!  Throughout the scenes given from huge towns with buildings ready to collapse, to beach scenes with unexpected guests you’ll be making sure you’re taking into account where all and any enemies can attack you from, you do however have a mini-map in the top right corner, as far as I’m aware the different dots mean this ;

–Green are pickups, these can be anything from gems to health! so look out for these

The only issue I had with the minimap is many times there are tons of enemies coming at you, by the time you’ve checked your map to see behind you .. they’ve probably already tried stomping on your head and you already have to recover and shoot them up again!

During the game, by killing enemies and retrieving pickups you will charge up your overdrive! this means you can move faster, shoot faster and essentially clear levels faster, it lasts around 20 seconds ( i think) and you can clear a good few enemies whilst it’s in use, so don’t forget to use it especially when the big guys come for you!

The first rounds of bugs always seemed super easy to kill and I didn’t feel as though I had accomplished much by the time the campaign level was done, but as always that changed when I processed through the higher levels!

Returning to the main menu I discovered that there were other options, including playing the campaign with an extra controller or even online with a friend! this could up things if you fancy another play through it you could challenge your friends to who gets the most kills or gems!

Another option was something called Mercenaries, you could play this online with other players or with your friends, I couldn’t find a match ( I’m sure it’s due to not being released yet! )  but I found out online that it is a versus game mode where you compete for energy gems, you’re divided into two teams and you choose to join either team earth defense force, or team kindred rebellion and you defeat each other, collect the gems and deliver them to your own recover drone – whoever gets the most wins! I’m excited to get into a multiplayer game of this, so I’m hoping to return to test this side part of the game

The graphics look similar to ps3 games but as a more indie game, I think it looks fantastic!  I enjoyed how detailed the bugs were and how your hair bounced as you jumped, it’s the little things!

I did have a few issues with the audio at first and found it easier to understand what I was being told to do by putting on a headset, I’m unsure if I have old lady ears or if it was the background noise, whatever it was I couldn’t hear over the shooting what they were saying down the comms, it soon  became clear when I had my headset on and could focus properly, there is a lack of noises when it comes to the giant bugs and often I turned around to an ant all up in my grill.

I feel that when Earth Defense Force: Iron rain is fully released and others have the game you may spend hours playing online with friends or even doing the campaign trying to better your score each time you do it! it does have a good few hours worth of play on it and when Mercenaries is available and I can join the online games i feel it could be what drags me back to playing the game, where this be to be a goodie or a baddie I’m not too sure !  if it has a positive effect on me I will continue to play it but until the full version is open I do not know!

I personally think Earth Defense Force: Iron rain is pretty good, maybe not so much my style of gaming as I didn’t feel the “nag” of wanting to go back and play it more like I usually would with many other games, the storyline is nice but I also think if I were to play the previous games I would understand  the game and enjoy it more! I am going to give this game the thumb culture silver award as it did open my eyes to a whole new genre of gameplay, I just didn’t have the ” I NEED TO PLAY NOW” feeling towards it.