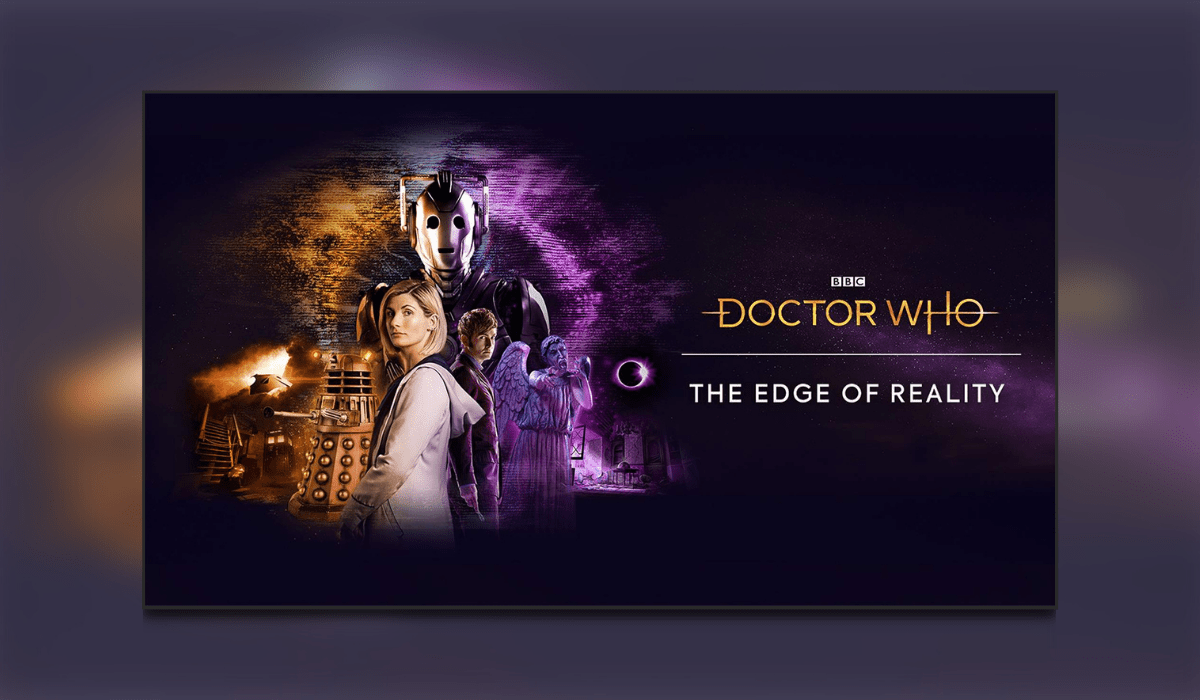 With Doctor Who making its long-awaited return to TV. I take a look at what the teams at Maze Theory & Just Add Water have created with Doctor Who – The Edge Of Reality. Originally released as a VR title at the end of September, it is now available for consoles. Complete with character likeness and voice from the 10th Doctor (David Tennant) and Current Doctor (Jodie Whittaker).

You start the game in a laundrette, playing as a faceless/nameless person in first-person view. It isn’t long before you are contacted by The Doctor (Jodie Whittaker). Reality is under threat from a mysterious new enemy who has released a reality virus to remove humanity from the universe. You have been tasked with finding 3 items through time and space when these are combined they can stop the virus.

Outside of the laundrette, the earth is under attack from a Dalek invasion. Dalek ships fill the night sky and a handful of Daleks patrol the neighbouring junkyard. Playing the game solely in first-person view is the same as the VR release that shows your right arm holding items such as the sonic screwdriver or a torch. This can be lowered when interacting with objects or collecting items.

Throughout the travels, players can find two types of collectables. First, a journal that gives information about the enemies and the virus. Secondly, some items will be familiar to fans of the show such as a bowtie and fez as a nod to the 12th Doctor (Matt Smith). The Edge of Reality doesn’t contain any combat, so you will need to avoid enemies or use other means to disable them. Some puzzles hinder your progress, but nothing overly difficult.

The Daleks, Cybermen and Weeping Angels are the trio of enemies that you will come across during your adventure. A perfect selection of perhaps the most popular enemies. With these enemies, you would expect a level of difficulty however you can easily outmanoeuvre or confuse them by simply hiding behind a box. It isn’t until you face the Weeping Angels that you get the feeling of any sort of panic. Narrow corridors and an enemy that moves when you are not looking at them it has been well implemented. This was the only time the trio of enemies felt threatening and I think more of that is to do with the character. Daleks only shoot when you are up close and Cybermen weapons are easily avoidable. There is a lack of enemies throughout the game which is disappointing and as such the difficulty is very low.

Straight from the outset, you can see the influences that have come from the VR release. The characters arm position is limited to one movement. Character definition is low, especially when it comes to the Doctors. Often only seen via a grainy holographic display of their face. Which considering being a console release could have been drastically improved. There are some times where I was impressed, looking at the views of the Tardis in cutscenes is one example. This is counterbalanced by rough edges and screen tearing. I did experience a few glitches whereby it was impossible to interact with an object, thankfully Maze Theory have been quick to fix this particular issue.

The music often drains out the character audio and with no way to adjust this in settings you can be left wondering what is happening.

Voices of David Tennant and Jodie Whittaker give the game the authenticity it desperately needed. Nick Briggs voices the Daleks and Cybermen as is done on the show. The sound of the Tardis and sonic screwdriver both as fans would expect are also very good.  It feels that for every positive aspect of the game there are at least 3 or 4 things that go against it. Fans are going to love the return of David Tennant who is arguably the most popular incarnation of the Doctor since the series came back to our screens.

The Edge Of Reality is a short game with a completion time of 2.5 hours or 3 for full completion. Fans of the series will notice a lot of easter eggs for players to find, this does extend the gameplay slightly but even die-hard fans will find little reason for multiple playthroughs. With no additional difficulty options, it is possible to get all trophies on a single playthrough. I can’t help but wonder was this VR port actually necessary? I get that it will give non-VR players the opportunity to experience it but there is a big difference between hours in VR and sitting on the sofa with a controller.

Doctor Who – The Edge Of Reality left me feeling disappointed. Having played Doctor Who – The Lonely Assassin also developed by Maze Theory I was hopeful when this was announced. The greatest appeal of The Edge Of Reality is that it has David Tennant and Jodie Whittaker as their versions of the Doctor. The obvious flaws. not to mention the bugs on release will no doubt affect other reviews. I know that Maze Theory are capable of better than this, and I hope that they bounce back with another hit.
Developers need to see that simply porting a game from one format to another isn’t always going to work. Unfortunately, this is one of those times. For that reason, I award Doctor Who – The Edge Of Reality the Thumb Culture Bronze Award