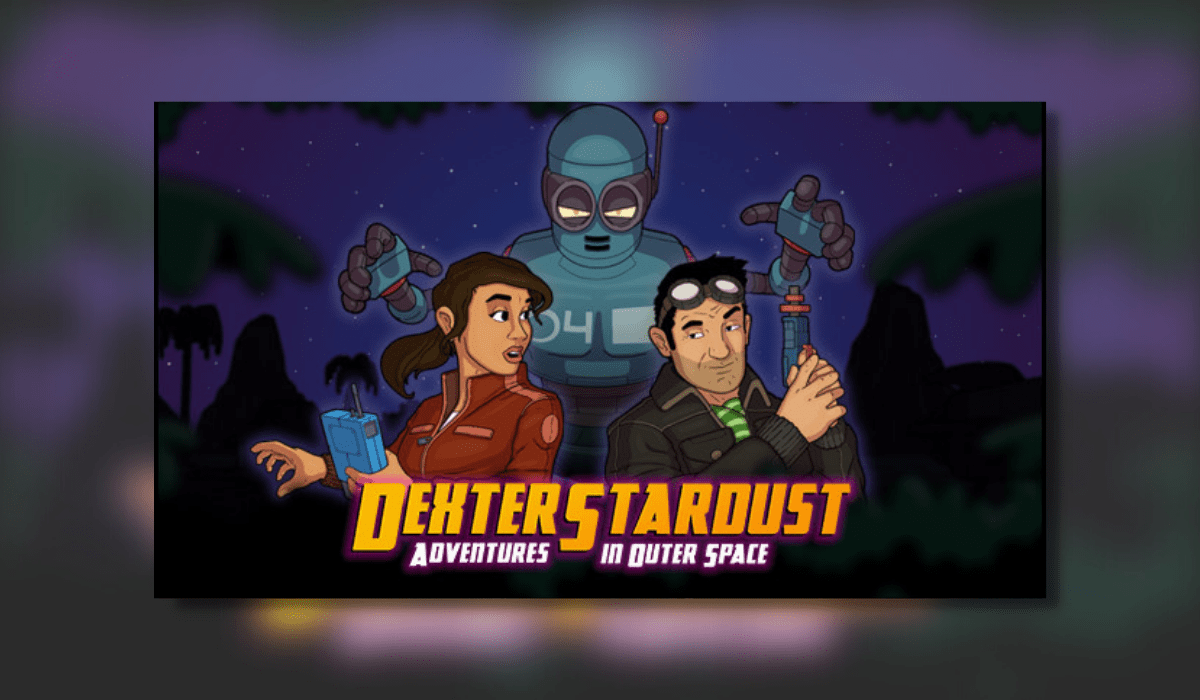 An enjoyable debut from newcomers Dexter Team and published by Flynn’s Arcade, Dexter Stardust: Adventures in Outer Space is a point-and-click adventure game set in the world of tomorrow and inspired by the greats of yesteryear from LucasArts and Sierra.

Get Ready For Some Familiar Space Adventures!

Indie point-and-click adventures have seen a tremendous boost in popularity in recent years, even with those new to the genre. And classic fans have found those elements that give them the adventure fuzzies come back with a bang. Dexter Stardust: Adventures in Outer Space is a love letter to all of those elements: kitschy 4th wall breaks, on-the-nose in-jokes and all.

Space exploration is now an everyday occurrence for humanity. But the discovery of ‘Planet X’ or ‘Vrees’, the 10th planet, signals great promise. This discovery ignites the destruction of Earth’s ecosystems by Vreesian robots and the evacuation of its populace to Mars. Young titular protagonist Dexter Stardust barely escapes with his life. Twenty years later, he and his best friend Aurora are scraping a living as space couriers. Not to mention using the spoils to feed an ungodly taco obsession. But a strange encounter with a Vreesian robot signals a change of galactical proportions for Dexter. The adventure he’s been waiting for is closer than he thinks.

Like any classic point-and-click adventure game, you control our taco-loving hero Dexter on his space adventures with a crosshair pointer and 4 interaction options: Pick Up, Use, Talk To and Look At. When a point-and-clicker makes its way onto consoles, there is always a slight worry of how well the interface will fare. No such worries here. The interface works with both the Switch’s movement sticks and the touchscreen, but the latter was never used. Cursor movement with the sticks is silky smooth and precise – perfect for keeping an avid adventure game firmly in the pointy clicky action.

Anyone familiar with this style will feel at home; weird and wonderful characters to converse with, strange items and puzzles to solve. All the meat of a good old adventure game. Channelling the cartoon serials of decades past, the chapters of the game are presented as ‘Episodes’, all prefaced and ended with punchy credits sequences. Every episode also has bars indicating the amount of focus given to story, puzzles and length in each, varying from one episode to another (though not necessarily in gradual progression). This is certainly handy as it gives an insight into what to expect gameplay-wise in each episode.

From a puzzle standpoint, nothing strays into moon logic territory which is always welcome. Pretty much all puzzles have a logically attainable solution and you can view Dexter’s objectives at the push of a button. Items or aspects of note in a conversation are highlighted and can usually be discovered in a single instance. This, however, does bring the difficulty down quite drastically. Adventure game veterans may be left wanting in terms of challenge, myself included. Very rarely did I have to think in-depth about how to solve a puzzle. When a hurdle did surface, it was often simply to find the “reason” for Dexter to complete an action and was quite brief.

Writing, however, more than picks up the slack on most occasions. Chock full of witty tete-a-tetes, cheeky references to adventure heavyweights and “Space!” in lieu of profanity, chuckles are guaranteed for even the most stone-faced players. There’s definitely a tremendous sense of fun running through the dialogue and interactions. But even this can be somewhat of a double-edged sword. Because of the overly comedic emphasis, the intended impact of more heartfelt moments is often lost, particularly as these moments come directly after highly comedic sequences with little to no buildup. The lines in these moments feel rather flat and lack the depth needed to make them truly stick.

Nevertheless, the gameplay is rather enjoyable overall and will certainly suit newbies to the point-and-click genre.

In keeping with its cartoon vibe, Dexter Stardust opts for traditional animation with bold lines/colours and limited frames: ‘60s Hanna Barbera meets Futurama. Characters are vibrant and expressive even in limited frames and in some cases limited exposure. Without giving context away, a favourite character of mine from Episode 1 was literally just a large muscled arm sticking out of a hatch at the entrance to a city. The animation and voice acting on this simple arm oozed character and had me in stitches!

Speaking of voice acting, Munk Alejandro does an excellent job of portraying the clumsy but lovable Dexter injecting the warmth and wit of those classic cartoon protagonists that graced our childhood screens. Lola Mendez also delivers a solid turn as the realistic and practical Aurora, though some lines read slightly detached – a combination of both delivery and wording. And as mentioned earlier, the heavy emphasis on comedy sometimes does make the more emotional lines/scenes less impactful. But on the whole, both performers embody their roles well. The integration of Spanish into the dialogue also works nicely and feels very smooth.

Naturally the soundtrack also follows the visual themes: heavy helpings of ‘50s/60s surfer rock mixed with Latin rhythms and outdoor ambience. No track feels out of place or at odds with the visuals. You’ll find yourself bopping along space style in no time!

As mentioned earlier, each episode has a different level of focus on story, puzzles and length. Episode 3 takes up the majority of playtime with a heavy focus on the latter two. Completing it roughly takes around twice the time of the others combined. But given that the difficulty is not too strenuous and control is smooth, players will likely average around 5 hours in total. 6 hours if you refrain from fast walking and take in every little nook and cranny. Like most point-and-click adventures, once you know the way, there is little replay value to be content-wise. Unless it becomes a favourite for you.

If you’re looking for a comfy adventure to slip into, one that will put a smile on your face and pass a happy few hours, then Dexter Stardust: Adventures in Outer Space is for you! Definitely a game to play while travelling or to make the morning commute a little more fun. Point-and-click newbies will have a warm introduction to what makes these games tick and veterans will find the writing, references and humour they know and love. Those wanting more brain-teasing puzzles for their buck however may not necessarily find what they’re looking for. But either way, it’s definitely a space adventure worth taking for a spin. And for this, it receives the Thumb Culture Silver Award.

Give it a try for yourself, see where you end up!