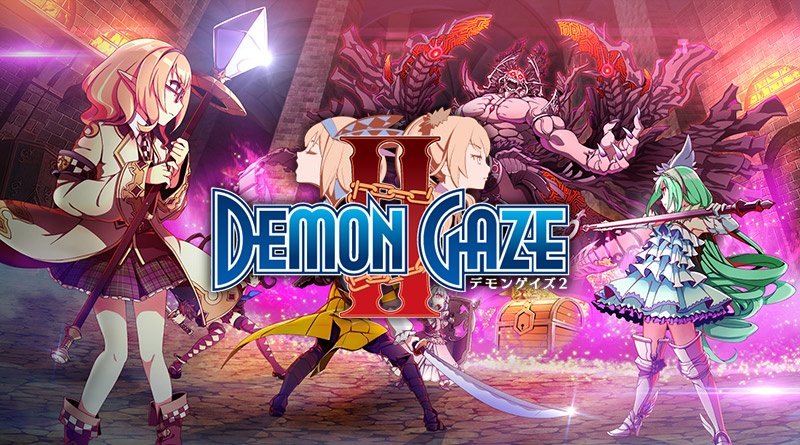 Demon Gaze II by Kadokawa games and Experience is a Japanese role play game (JRPG)/dungeon crawler that is available exclusively on Playstation 4 and PS vita.  Demon Gaze II is unsurprisingly the second instalment of the series that has been produced due to popular demand as a follow on to the original Demon Gaze that came out 4 years ago.  So what’s it all about? Lets find out!

Diving straight in, character creation is the first port of call.  Choosing a portrait from between a dozen anime looking people then leads to selecting your temper, skill, name and voice.  Temper is a choice between good, neutral and evil, something that ultimately is connected to the skills that you can then choose between.  I went for a neutral temper and then had the choice of either a defensive or attacking skill named “hamstring” and “terra bane” respectively.  Selecting a voice is merely a choice between various grunts and groans that you get all too familiar with when navigating within the world.  Ok, so character created and finally its time to get into the story.

You wake up within a castle, unsure of who you are and how you got there.  You are not alone, a character called “Farmer” is also with you and he too does not know what has happened to everyone.  In true anime fashion there is a lot of voiced dialogue to get through which requires you to press “x” on your controller to continue to the next part of the dialogue.  Every so often you are allowed to pose or answer a question by selecting from a choice of 3 sentences of text, it doesn’t seem to matter what you say as the next part of the story plays out regardless.

After what seems like an ice age the dialogue falls away and you can begin to move around within the castle.  Movement is very simple.  Forwards, back, turn left and right and strafe.  To the retro gamers, movement is similar to FTS’s classic Dungeon Master and to the young’uns it is a bit like moving the google car along the road while in street view.  Its a little clunky to say the least and the textures are very basic.

There is a mini map that slowly reveals the areas you have visited and highlights any doorways.  Locked doors require you to find a lever.  After a bit of wandering, well sorry that’s a lie, being told where to go, I found a room but it wouldn’t let me explore it and spun me back around to face the corridor!  After a few locked doors you meet a girl called Peg who says she can lead you out of the castle.  She reveals that the city you are in (Asteria) was founded by her father, Lord Magnastar.  She leads you to an incinerator, sorry, an astral furnace, and tells you to get in as it helps turn your soul into star power.  The poor farmer refuses and gets thrown inside, he becomes rather crispy.  No more farmer.  When it’s your turn a strange voice comes from a nearby radio talking of revolution and that Lord Magnastar must face his crimes.  There’s an intervention and what appears to be rebels lead you away to the 2nd floor of the castle, all the while being chased by Peg.  Spoiler alert, Peg is infact a demon called Pegasus and she has morphed into a half horse type person wielding a huge blade, pretty much your average Saturday night stuff.  Finally it is time for a battle and about time too as the “x” button on my controller needs a rest after reading through dialogue after dialogue for the last 20 minutes!

Battles are turn based with a static backdrop and an anime adversary stood before you.  By selecting your attack from those available, a random amount of damage between a set range occurs depending on what you used.  I used “wakizashi”, caused 21 damage and got 2 hits in on Peg.  She didn’t retaliate and I basically repeated the procedure another 2 times.  Once her health had depleted she disappeared and a results screen appeared showing me my XP gained and if any treasure was found.  Once XP has reached a certain total you level up and can choose a point upgrade for your character’s abilities.

Back to the dialogue and your eye pulsates.  Peg is strangely back, didn’t I just kill her?  She states that my eye is “like papa’s” and is then absorbed into my eye.  Okay.  Here you find out that you posses demon gaze power, also known as an evil eye.  Cue a rescue and then a pretty cool animated cut scene. (see trailer below).  I only wish that this was how the gameplay looked!

Short version of the story is you get taken to the rebel hq, known as “Stella’s place” where you found out the background of the rebs and their beef with Lord Magnastar.  You learn of various locations within the hq that you can visit via clicking on a map such as a tavern, item shop and radio room.

You should be thanking me for that titbit of information as it took me over 40 minutes of dialogue to get through it.

The goal of Demon Gaze II is to enter the various restricted locations around the city such as Dragonwood, Olm Street and Star Temple to defeat enemies in order to take control of spinning pink diamonds before taking on a boss therefore capturing the city zone.  With each win the rebels gain more popularity and ultimately followers to aid their cause and rid the city of Lord Magnastar who can also control demons like you.  The party that you decide to visit locations with can be selected before undertaking explorations to the various city zones.  Peg is now your ally and you can control her thanks to your evil eye, her abilities such as “demonize” coming into play during battles as she provides an extra attack to the party or considerable damage.  Wandering about the city location uses tedious movement as seen before while the battles utilise better looking static backdrops with superimposed anime baddies such as “city goblins” that look like psychotic bunnies and twig chewing mutant guinea pigs called “Mupybara”.  Before each pink diamond battle you can choose to play gems that give a greater chance of dropping unique or high quality items such as armour and weaponry should you win.  Any damage that is inflicted is healed upon returning to Stella’s place.

Being a JRPG the characters are all drawn in the great anime way sporting everything from the large eyed feminine heroes and villains to the oddly looking japanese man with cat ears.  The graphics while navigating through dungeons and city locations is pretty bad and is very much like the early RPG games of the 80s/90s.  Textures are nothing special to write home about and twinned with the google car style movement it is very easy to get disorientated when accidentally turning around.  During the battle phases both the backdrops and the characters are greatly welcomed by the eyes!

The soundtrack isn’t too bad if not a little cheesy at times however this is something characteristic with anime productions and therefore is not at all out of place.  The sound effects are monotonous with the grunts and groans constantly playing as your character is either struck by an enemy or you accidentally walk yourself into a wall.  The dialogue that accompanies the story goes on and on and on and on and is nice and clear.

The story takes several hours to play through, just getting to the first city exploration took me 2 hours and that was with skipping a little bit of the dialogue here and there as I was itching to get on with the actual battles.  If you are a fan of anime and JRPG’s then you will probably love this game however for me I spent too much time pressing “x” at the end of each sentence and felt boredom ensuing.  I was disappointed with the whole dungeon/city exploration experience and it would have been nice to of had better graphics and movement to make it feel that you are actually wandering about rather than the basic maze approach that it conjures up.  Battles can be played as simply or as complicated as you want with lots of different attacks and defences at your disposal once you have unlocked the parties various abilities.  There are many characters and demons to discover along with a broad range of attacking and defending abilities.  For me however, it was all a little long winded with minimum action. I award Demon Gaze II  a Thumb Culture Bronze Award.