Dead or Alive 6 is the latest in a fairly long running franchise from Team Ninja. Personally, I don’t have too much experience with this particular series, however, I am a big ‘Beat’em up’ fan so when given the chance to review this I was looking forward to it.

Everyone knows the DOA games, however not necessarily for the fighting, it has a somewhat rough reputation as ‘oh the one with the bouncing breasts’ which, while true enough is a little harsh in my opinion (at least going into the review).

The Developers did make it clear that Dead or Alive 6 would be a much more serious entry into this genre and offer more in the lines of competition and less ‘jiggle’ mechanics.

So, does this game offer more than a little titillation? Let’s find out…

Dead or Alive 6 is split into a variety of different options; Story Mode, Quest Mode, Fight, Training, Online and Options. Pretty standard choices really, although the game does offer you a tutorial ‘quick start’ upon first play which can be repeated at any time from the main menu by pressing the Options button.

The majority of these choices are fairly self-explanatory, so I will focus mainly on the Story Mode and the Quest Mode since they seem to be the most unique to this title. 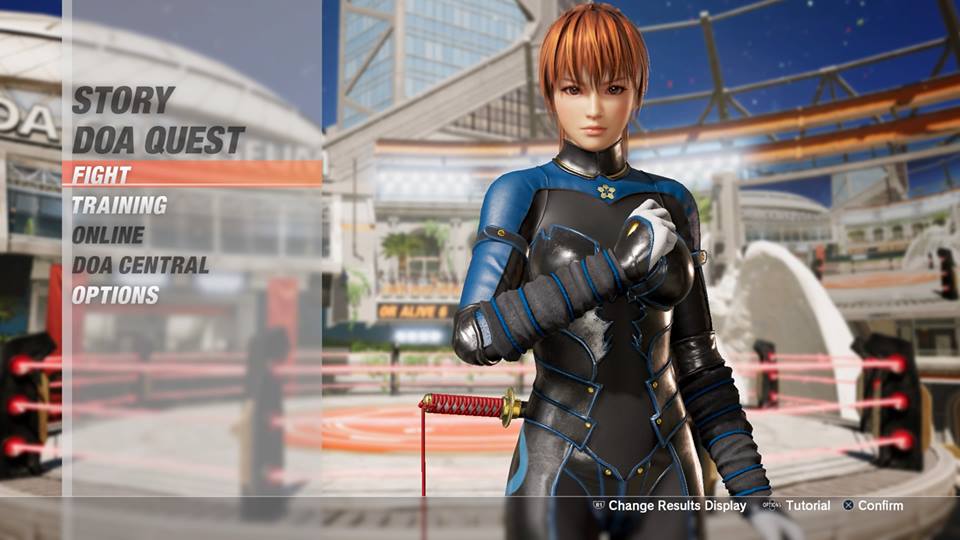 This is the staple of any fighting game when playing on your own. Dead or Alive 6 does this using a rather unique timeline view where you have every character’s story progressing at the same time, giving the player a chance to either focus purely on one character at a time or move across the chapters with all characters before moving forward in time.

There is a slight restriction here as some of the episodes are locked until you pass a certain point, meaning you have to go back to them. This didn’t really hinder the story in any way.

One nice touch here is that on each match screen it tells you who the playable character is and also allows you to visit their tutorial page using quick access of the Triangle button. 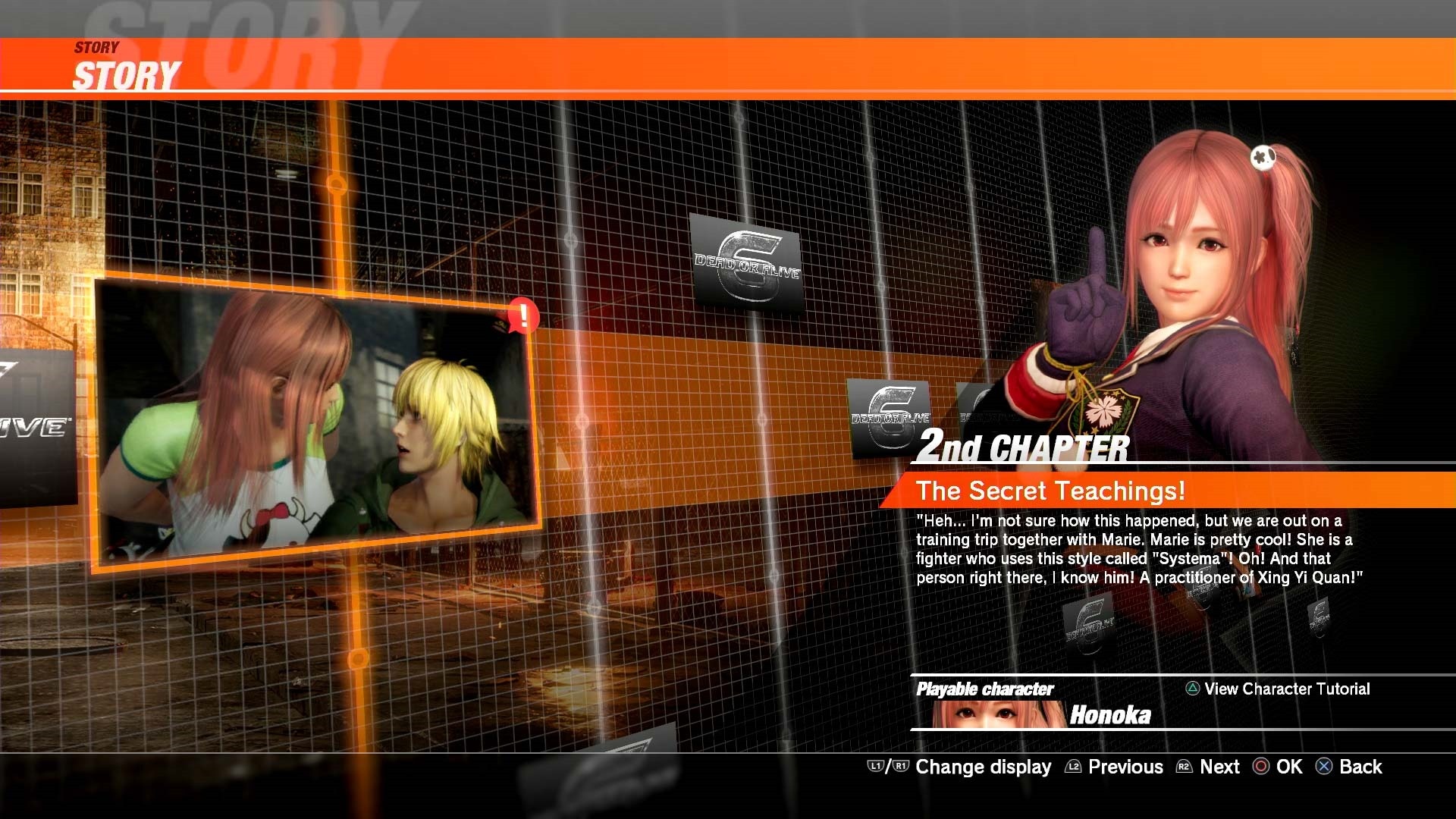 Quest Mode is very much a challenge mode where the player is set 3 tasks to complete throughout the fight and is given a star rating based on how many targets are completed.

Nothing really new here, however, it is still fun and a good way to get used to using all characters which is definitely a positive in any game of this genre, especially when moving into the online world. 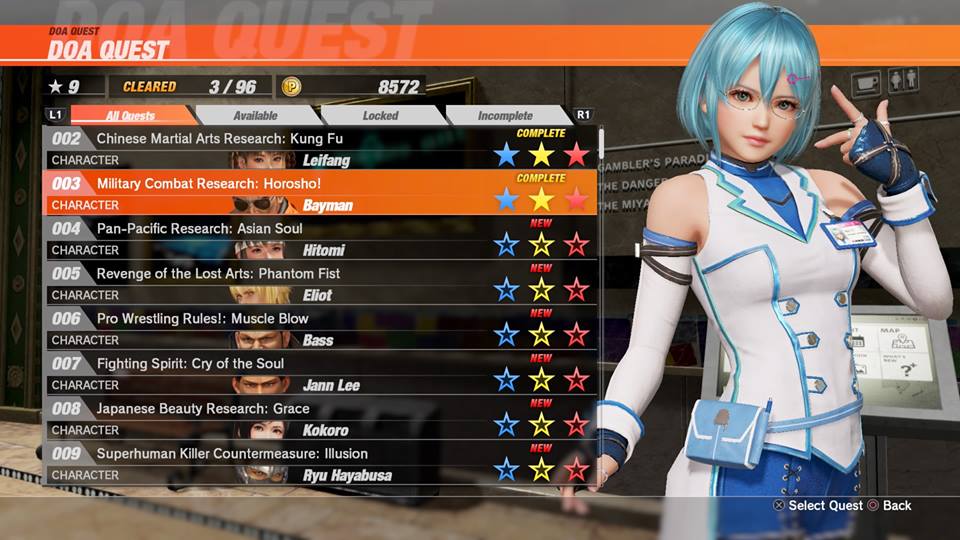 Dead or Alive has always been a popular series in terms of its fight mechanics, its fast paced and relatively easy to pick up and play but still with more complicated areas for those who wish to master the characters.

The controls are fairly simple in terms of basics; Punch, Kick, Throw, Special and Hold (block). It’s how you combine them that’s where the true magic lies.

I will say that having worked through the list of characters in the game, the amount of fighting style and character models that seem to be almost carbon copied from Tekken surprised me. Take Brad Wong, for example, he is clearly a copy of Lei WuLong, just with a few cosmetic changes). Another example is Rig who is obviously based on Hwaorang, those Kicks are instantly recognisable.

Don’t take it the wrong way, I like these characters within the game, just a shame that they felt they needed to borrow from another franchise to keep up.

There have been rumours that a certain character from the Yakuza series would be making an appearance (anyone that knows me will know that this peaked a little interest from me as a fan of the series), however after a lot of research it seems that this is purely fan speculation (for now at least).

Dead or Alive 6 doesn’t break any new ground in the graphics department. It looks decent enough for a new release, but that’s about as much as I could say.

The breakable environments are a nice touch, again I know its been done before (Injustice for example) but I do get a little frustrated with invisible walls in games, especially when the ‘arenas aren’t exactly large areas.

Now I know I mentioned earlier about Dead or Alive’s reputation when it comes to the female characters, as expected the ‘jiggle’ mechanic has been toned down considerably to a somewhat more realistic level. That doesn’t, however, mean its gone altogether (as you can see below).

I will say that during the fast paced combat, the graphics were still crisp and clear, I didn’t see any frame rate drops and experienced almost no lag (however due to having this prior to release I cannot really comment on the online servers.. so in that respect its very much TBC).

There is very little really to review in terms of the Audio. There is a generic soundtrack during the menu’s which is acceptable although repetitive after a while and I think the mute function will be taken advantage of.

The fight Audio again can get repetitive, although in truth neither of these issues are purely limited to Dead or Alive, they are very much a problem for almost all games of this genre, so I won’t be overly harsh on the Team Ninja crew for having the same problem.

Dead or Alive 6 will be a very subjective game in this area. There is a fair amount of content to keep you busy for a while but in truth, the online section is going to make or break any longevity this game has. Fans will spend hours and hours on it without a doubt, but the casual gamer will most likely dip their toe in the pool every so often but most likely won’t stay for any serious period of time in any single visit.

There is a decent selection of Trophies to obtain here, a good portion of them are online play, but I don’t see anything overly challenging in terms of obtaining 100% for those completionists out there.

Team Ninja has put together a solid entry into the DOA world. While there is nothing truly groundbreaking here, fans of the genre will find plenty here to sink their teeth (or fists) into and won’t be disappointed.

I do think a little more originality with the characters would have made a huge difference (especially as a Tekken fan). I found myself questioning why I would play DOA as a character with a Tekken Move-set, surely I would just play Tekken?

Is this a day one ‘must have’? probably not, but if any of you feel like punching a CGI opponent, look this one up.

Disclaimer: We were provided with a Code in order to complete this Review. Thanks!