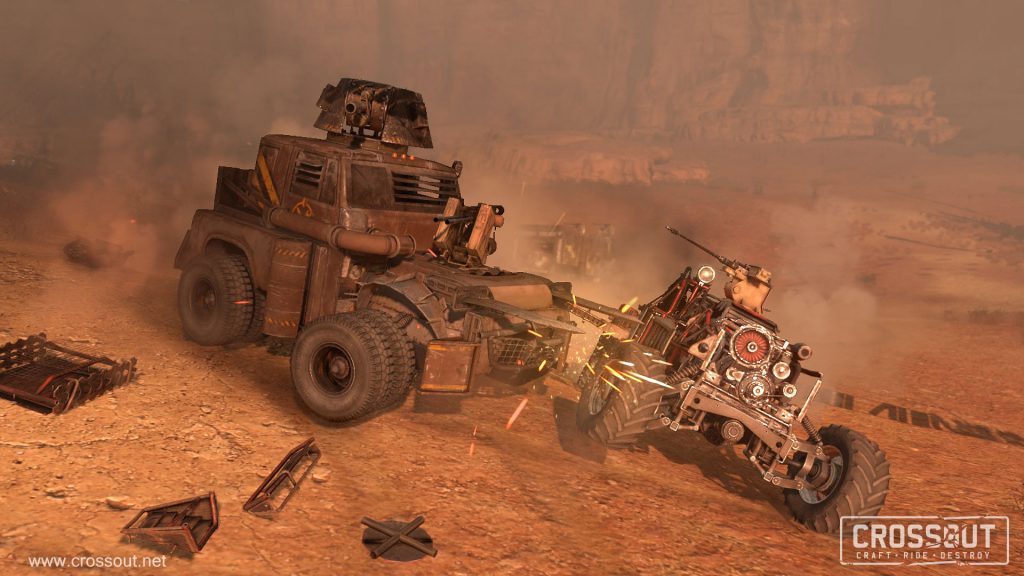 Crossout, by Targem games in collaboration with Gaijinent Entertainment (the people behind War Thunder), is a thrilling free to play battle set in a post-apocalyptic world whereby you get to craft and drive your own vehicles into the arena.  The year is 2021 and a mysterious viral epidemic known as the “Crossout” has swept the planet killing or changing people into suicidal maniacs.  Those that are left on the planet conceal their mutated features and battle with one another for their survival.

My first impressions of Crossout was that of Mad Max meets Destruction Derby however there is a lot more going on than just driving around and bumping into other vehicles, oh no, you have guns, rockets, chainsaws, spikes and blades as well as a whole host of other vehicle stopping weapons at your disposal.

Game modes vary between 4-8 player PvP battles such as team death match and capture the base however there are also PvE modes for groups of upto 4 players.  As well as playing battle matches there are also season challenges to compete in that are time based and give you further rewards as you progress.

Thanks to the innovative feature of being able to build your own vehicle, I found myself spending a long time in my garage trying to come up with the most efficient (and menacing looking) truck possible with the parts that were currently at my disposal.

Starting with a basic truck blueprint it is upto you to either build onto it or completely start from scratch.  As you take part in battles, you earn points that contribute to both your level and your faction.  At the beginning you are helped along by the mentor’s daughter Ivy XO however once you have 10 engineers you can join the Lunatic faction who will reward you with new vehicle parts and weapons as you compete in the many challenges.  As you reach new levels you can change faction working up to the Steppenwolfs.

Parts range between, common and rare all the way up to relic.  The amount of weapons and other gadgets such as a self righting mechanism that you can install on your vehicle are limited by the amount of power points that you have.  You can choose to install a nice fat gun that deals more damage than some mini guns however you will have to sacrifice other components in order to compete.

The more parts you install such as fenders, wheels, spikes, gun mounts, etc all increase your overall strength as you can imagine but be-warned that you will poodle along in the arena rather than be able to dart in and out of areas thanks to the increased weight you are carrying!  Your end contraptions can be uploaded into the exhibition section of the game where other players can view your “bringer of pain” and like plus download the blue print for themselves.

Another feature with Crossout is the ability to create new and advanced parts for your vehicle by consolidating other parts, these can either be installed to your truck or even auctioned within the in-game marketplace.  Within the marketplace you can trade between other players, setting the price that you require for your wares while the players wanting to purchase your nice new shiny equipment can also suggest their own prices that they are willing to pay.

Like many free games there is the chance to purchase in-game currency should you wish to rapidly upgrade and buy better vehicle parts within the marketplace without the wait/grind.  You will still require to be certain levels to unlock the best parts, however there is a distinct advantage of being able to purchase premium parts, making you much more lethal within the arena.

The intro movie is pretty cool showing a driver going into his workshop to get his latest creation ready.  I particularly like the attention to detail within the garage as the various parts go together seamlessly and vehicles offer numerous locations for them to be placed.  My son really enjoyed spray painting the different bits of body work which did not take long to do.  The large arenas within the world are filled with beautifully rendered obstacles such as rocky terrains, long grass, rivers, dilapidated buildings and bridges which do make you wonder whether Mel Gibson (Tom Hardy for all you young people) is going to come speeding towards you at any given moment.

When battling I did love the way that you can target your damage onto different areas of an enemy vehicle causing the part to eventually fall off and immediately affect them.  So you think having a big gun is cool? not once i’ve shot it off!! hahaha.

The heavy metal soundtrack leading into the Crossout intro creates an atmosphere of action and grit as electric guitars grind in and out along with the thumping drums outlining the contents within.  The vehicle sounds are rich with some good bass when firing large turret guns which I’m sure I shall hear about from the neighbours…

Crossout is a fun game to pickup and play if you enjoy driving games and destroying people.  With its altering daily and weekly challenges there is always something to be working towards after all level 25 is your goal to become one of the Steppenwolf’s,  The amount of vehicle customisation is brilliant, it is not over complicated and is literally a case of dropping parts where you want them so long as they can go together.

I enjoyed the game to a point but I couldn’t get on with the steering of the vehicles, they reacted as if they were on ice at times making them hard to control especially when trying to get out of a bad situation, I just performed donuts or drove into obstacles!

The steering aside, the concept of the game is really good and being free there is no reason not to download it and have a play.  The dev’s are going to be adding further content as the game life progresses so what are you waiting for? Craft, Ride and Destroy. Crossout is available on PS4, XboxOne & PC and I give it a Thumb Culture Silver Award.