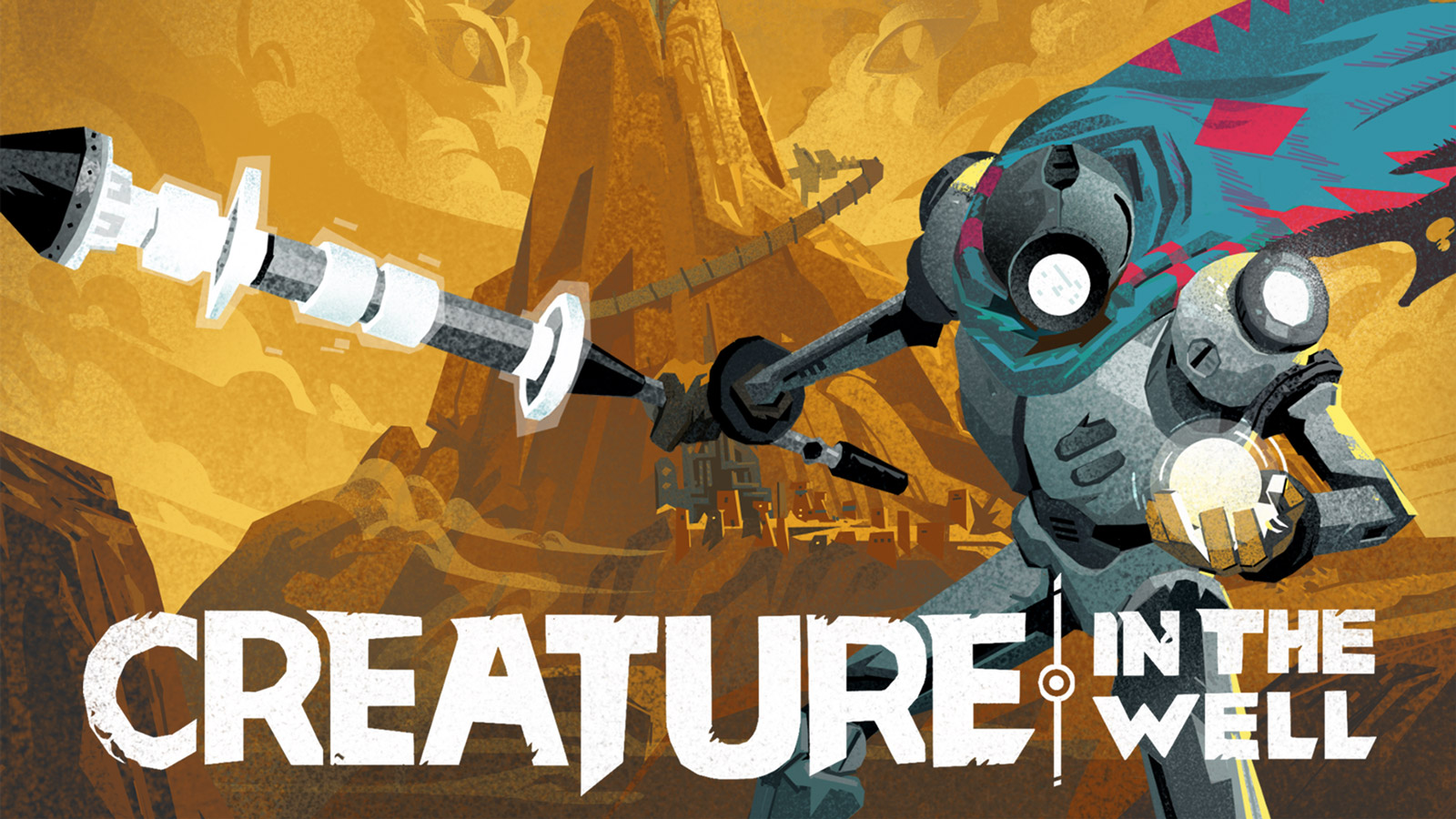 The year was 1901 and Julia Davis Chandler knew only two things, she liked peanut butter and she liked jam. At that moment genius struck and just like the Spice Girls, she decided that two must become one. That day the American youth were introduced to the Peanut Butter Jelly (Jam) sandwich, and this revolutionised snack time for years to come.

Fast forward to 2019, and Flight School Studios have combined the dungeon crawler and pinball genre to create a truly fascinating game, which releases on Switch, Xbox One. and PC on September 6th 2019.

Creature in the Well opens in the midst of a sandstorm. The protagonist, Bot-C, awakens and begins his journey towards a mountain town in the distance. This is where we are introduced to the antagonist, the Creature in the Well, who is a looming presence throughout the game. Flight School Studios does a fantastic job when it comes to setting the tone of the game. The art style, music and setting all complement one another to create a unique experience that will leave a lasting impression.

This is not a game that holds your hand, in fact it prefers to kick you in the arse. You are given no instructions throughout the game, however, due to the expertly designed dungeons, you learn the mechanics quickly and are then challenged to perfect them. Each of the game’s 8 dungeons are themed, making them feel distinct from one another.

Each room varies between hack and slash, puzzle and reflex based scenarios. You are tasked with flinging your balls at targets in order to earn energy, which in turn allows you to open doors or level up. Speaking of levelling up, like I said previously, the game literally tells you nothing about the game’s mechanics, which can make the early game feel frustrating.

The game is difficult and you will die…a lot. When this happens, you are thrown out of the dungeon, which begins the laborious trek back to the room you failed. However, rather than getting annoyed, due to the game’s excellent gameplay loop, I found myself rushing back into the dungeon to progress that little bit further.

The dungeons are designed for exploration, there are secret paths to discover and various routes to take, which will lead to new weapons that will help you progress. Unfortunately, some rooms in the dungeons are repeated, which is disappointing but this can be easily overlooked.

The graphical style is fantastic. The bold colours, mixed with the semi cell shaded art style looks incredible docked and handheld. The visuals change from dungeon to dungeon, making them feel unique and distinct from one another. As well as this, the creature’s distinct, startling eyes appear in particular rooms which helps tie the dungeons together.

You will discover capes throughout the game which changes the appearance of the protagonist which is a nice touch, as it allows the gamer to personalise their experience. The design of the world is another element to marvel at. It’s like having an acid trip during the industrial revolution. The huge grey pipes contrast with the bright yellow surrounds creating a world that I absolutely adored.

Flight School Studios really nails the score. It ranges from beautiful, serene ambience, when exploring the outer world to more frantic, 80s inspired industrial synth. This crescendos in boss fights making them feel more hectic which adds to the intensity of the battle. As well as this, each weapon has its own sound which creates a satisfying thud, thwack and crack every time you whack a ball around the room.

Unfortunately, the game is relatively short, taking about 3 hours to complete the game.  After you have been in all the rooms in the dungeon, there is really no need to revisit, however you’ll thoroughly enjoy your time in this world.

Creature in the Well is a carefully crafted game that combines two genres to create a truly unique puzzle action game. The gameplay loop is addictive, challenging and rewarding. It trusts the gamer to work out its mechanic, which is refreshing, but may frustrate some people. Although it may not have universal appeal, those who are interested won’t be disappointed with this game. Flight School Studios had an audacious idea but they stuck the landing.  This hits the jackpot and is awarded the Thumb Culture Gold Award!